Natural disasters often constitute severe crises, involving damage to children’s mental health directly or indirectly, causing mental and behavioral problems. There is a growing body of research examining children’s psychological responses to traumatic events, including post-traumatic stress disorder (PTSD), depression, and behavioral problems (1–6). The prevalence rate of PTSD symptoms among children in Thailand 2 months after the 2004 Indian Ocean earthquake and tsunami was 6% to 11%, and the rate of depression was 5% to 11% (1). Following the Sichuan earthquake in 2008 in China, 11% to 28% of children suffered from PTSD symptoms (7, 8), 14% to 19% suffered from depression (7, 8), and 22% to 23% suffered from anxiety (7). Further, the Great East Japan Earthquake (GEJE) in 2011 caused behavioral problems among 26% of young children (9).

Several risk factors have been suggested for behavioral problems among children after natural disasters, including traumatic experience, poor living conditions, low socioeconomic status (SES), parental education, and parental mental health (5, 6, 9–15). Among these risk factors, parental mental health has been reported to play an important role in the behavioral problems of offspring (16, 17). Scheeringa et al. reviewed the association between parental trauma-related mental health illness, including PTSD symptoms, and mental health problems among children (16, 17) in cases of natural disasters (e.g., blizzard, hurricane, or brush fire), human-made disasters (terrorism, nuclear power plant explosions, or war), or interpersonal trauma (e.g., rape, child maltreatment, interpersonal violence) in the US, Croatia, and Cambodia, among children at a range of ages, from toddlers to adolescents. The results revealed a robust association between parental mental health and behavioral problems among offspring, suggesting that parental psychopathology may have a causal effect on children’s behavioral problems after traumatic exposure (16, 17). However, because most previous studies have used cross-sectional study designs (11, 18–26–28), the potential long-term impact of parental PTSD on children’s mental health remains unclear. To the best of our knowledge, three studies, one on bushfire and the other two on human-made disasters, reported an association using a longitudinal design (29–31). However, these studies are relatively old, and require replication in other settings, such as Japan, which experiences earthquakes frequently (e.g., the Hanshin-Awaji Great Earthquake in 1995, the GEJE in 2011, and the Kumamoto Earthquake in 2016).

We used data from the GEJE-FC study; details of the sampling strategy have been described elsewhere (9). The children originally targeted were 4–6 years old, and were attending nursery schools or kindergarten at the time of the earthquake in March 2011. In the GEJE-FC study, child participants were required for being able to memorize earthquakes and express their feelings to their parents. Therefore, the children in 4 to 6 years old were targeted, considering their developmental stage for the skills above. The parents of those children were also surveyed in conjunction with their children. At the baseline survey from August 2012 to June 2013, we recruited participants in multiple stages. First, we selected the municipalities impacted by the GEJE in three prefectures (Iwate, Miyagi, and Fukushima) as affected regions, and selected those in an unaffected prefecture (Mie) as a comparison region. Second, we selected nursery schools in each municipality of each prefecture. Finally, we asked the staff of the selected nursery schools to recruit parents to participate in the study together with their children. As we only targeted participants who were victim, living in the region of the earthquake at the time of the event in the current study, we excluded data from the comparison region.

A total of 275 children and 227 of their parents initially agreed to participate. Written informed consent was obtained from parents and their children by the research coordinators, after providing oral and written explanations of the study. The numbers of children and parents who actually participated in the survey were 255 and 213, respectively, in 2012 (baseline), and 181 and 153, respectively, in 2014 (follow-up, from July to December 2014). In the current study, we included children (n = 174) and their parents (n = 148) who participated in the survey in both years (2012 and 2014), and excluded records that lacked information about child behavioral problems in 2014 (n = 4) or parental PTSD symptoms in 2012 (n = 1). Finally, data from 169 children and 145 of their parents were analyzed in this study (Figure 1). Of 169 children, 24 were siblings with the same parents. The original GEJE-FC study was approved by the ethics committees at the National Center for Child Health and Development and Tokyo Medical and Dental University. Ethical approval was also sought for this secondary data analysis from the Kyoto University Graduate School and Faculty of Medicine Ethics Committee. 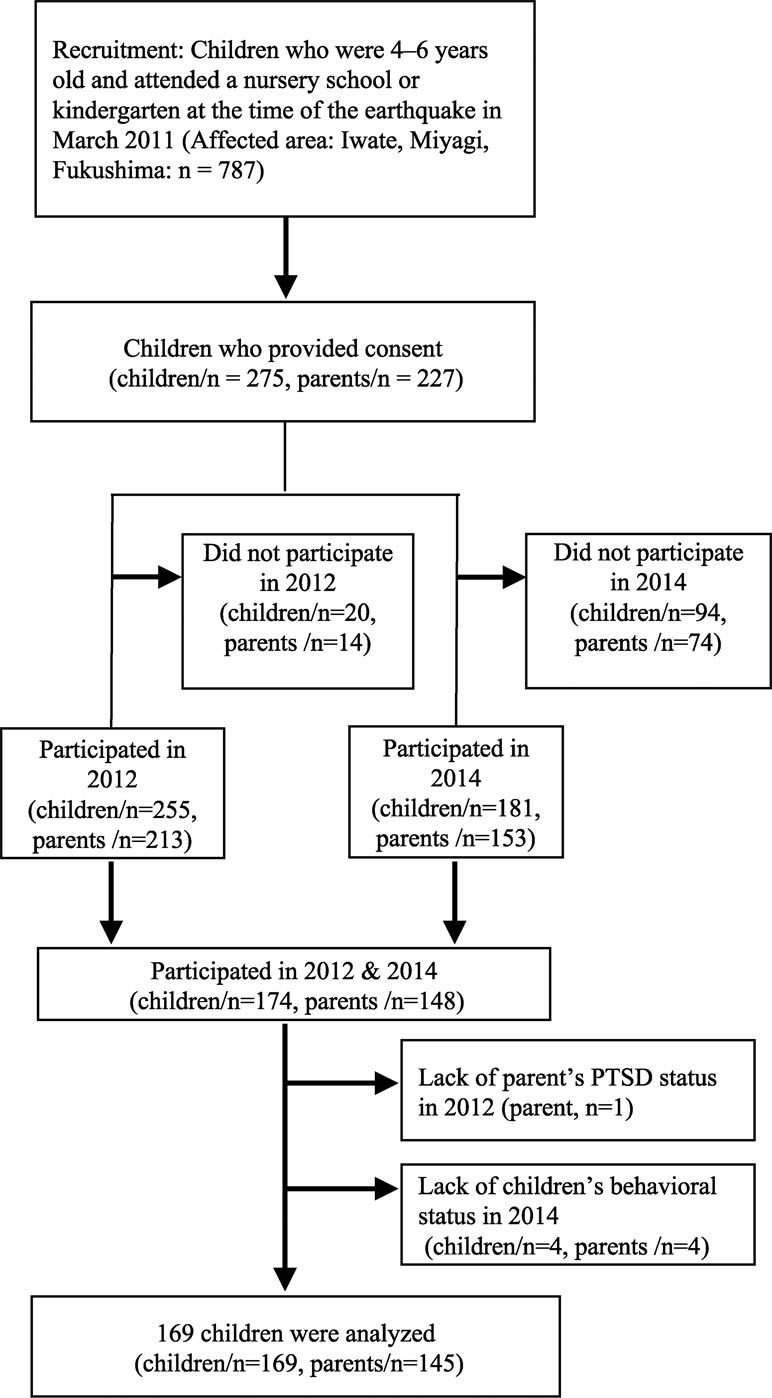 We assessed PTSD symptoms of parents using the Impact of Event Scale-Revised (IES-R) (32), which has been assessed for validity and reliability in four studies of different traumatic events in Japan (33). Scores ranged 0–88, and the cutoff score for having probable PTSD was set at 24 or more, based on a previous study in Japan (33).

We assessed children’s exposure to disaster-related traumatic experiences through interviews by psychiatrists or clinical psychologists, including separation from the parents, death of close family member(s), death of other close persons such as relatives or friends, watching tsunami waves or victims being swept away by the tsunami, exposure to fire, or witnessing a dead body. We also assessed other traumatic events including the loss of family, damage to the house (wholly or partially), evacuating a shelter, living in a temporary house, or separation from the family, using a questionnaire. We combined these data to calculate the total number of traumatic experiences of each child.

Characteristics of the Participants

The demographic characteristics and mental health status of participants are shown in Table 1. For children, the mean age was 6.7 years (SD = 1.4) with almost equal gender distribution in 2012 (baseline). T scores for behavioral problems measured by CBCL exceeded 50 (mean of Japanese children) in both 2012 and 2014 for total, internalizing, and externalizing behavioral problems with a tendency of scores in 2014 being consistently smaller than those in 2012. Although it was not shown in the table, children who were assessed as within the clinical range (cutoff score > 63 (35) in total behavioral problems were 18.9% at baseline and 20.1% in the follow-up. More than 80% of the children experienced one or more traumatic experiences. After GEJE, some children had consulted with the medical doctors, clinical psychologists, or educator on their mental health or behavior problems (19.5%), and also had visited the clinics or hospitals to receive medical care on those problems (10.1%). For parents, mean age was 36.8 years (SD, 6.0) at baseline, with most of them being mothers (93.1%). Although the other parents were fathers (4.1%), grandfather (0.7%), and missing value (2.1%), almost all of the “parents” were mothers in the current study. Half of the parents (49.0%) reported that their highest level of educational attainment was high school or less. The prevalence of probable PTSD (score ≥ 24) among parents was 24.1% in 2012 and 19.3% in 2014 with a tendency to reduce over time. In terms of family size, 75.2% of children had one or more siblings, while 22.5% had no siblings. More than one-fifth of families (21.9%) reported that their household income was less than JPY 3,000,000, substantially lower than the average annual income in Japan (JPY 4,150,000, approx. USD 4 million) (36) at the survey in 2014.

Table 1 Demographic and familial characteristics of participants at baseline (2012) and children’s behavioral and maternal mental health problems at both baseline and follow-up (2014).

Table 2 Correlations between scores in 2012 (baseline) and 2014 (follow-up) for parental PTSD symptoms and children’s behavioral problems. 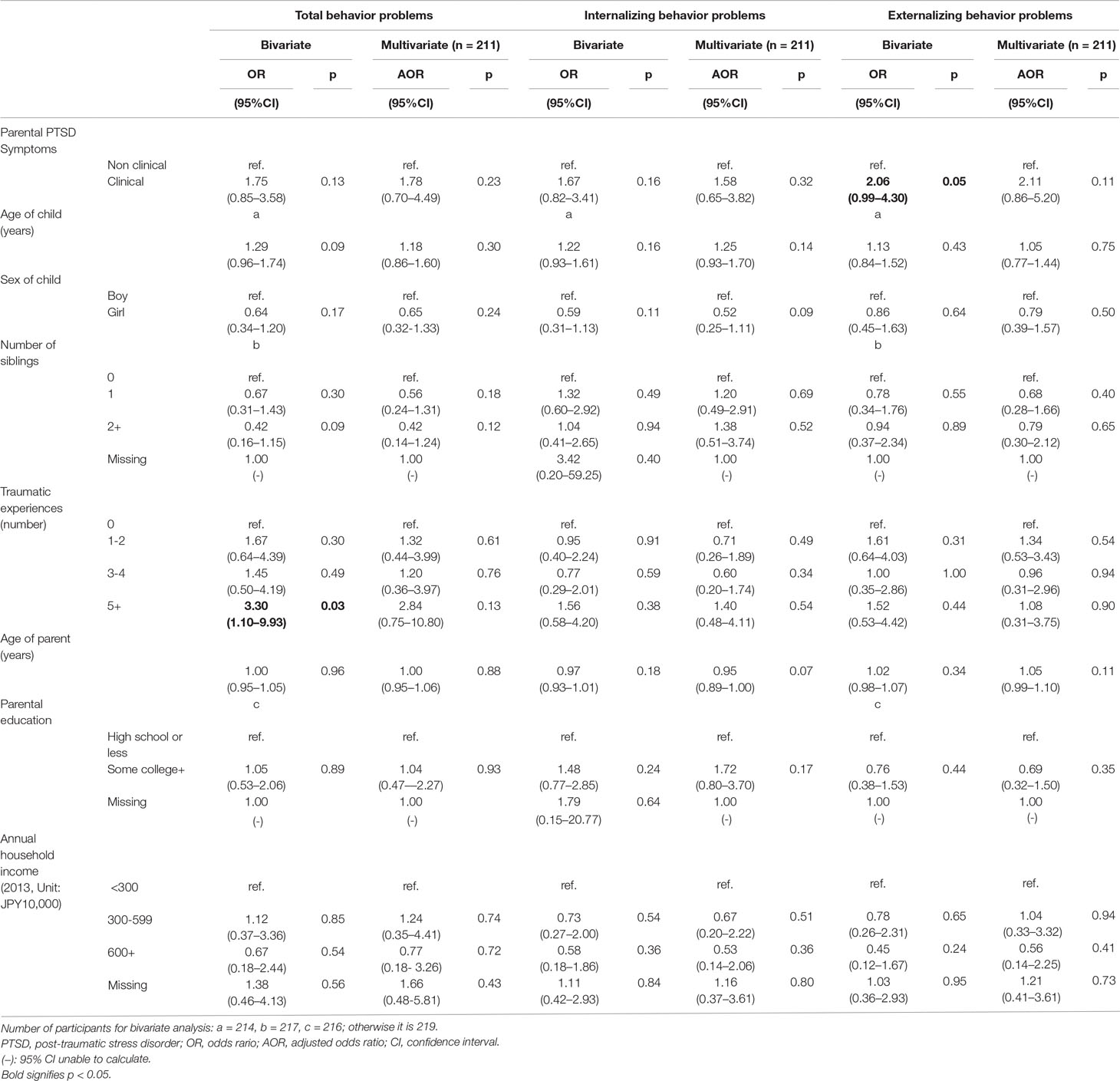 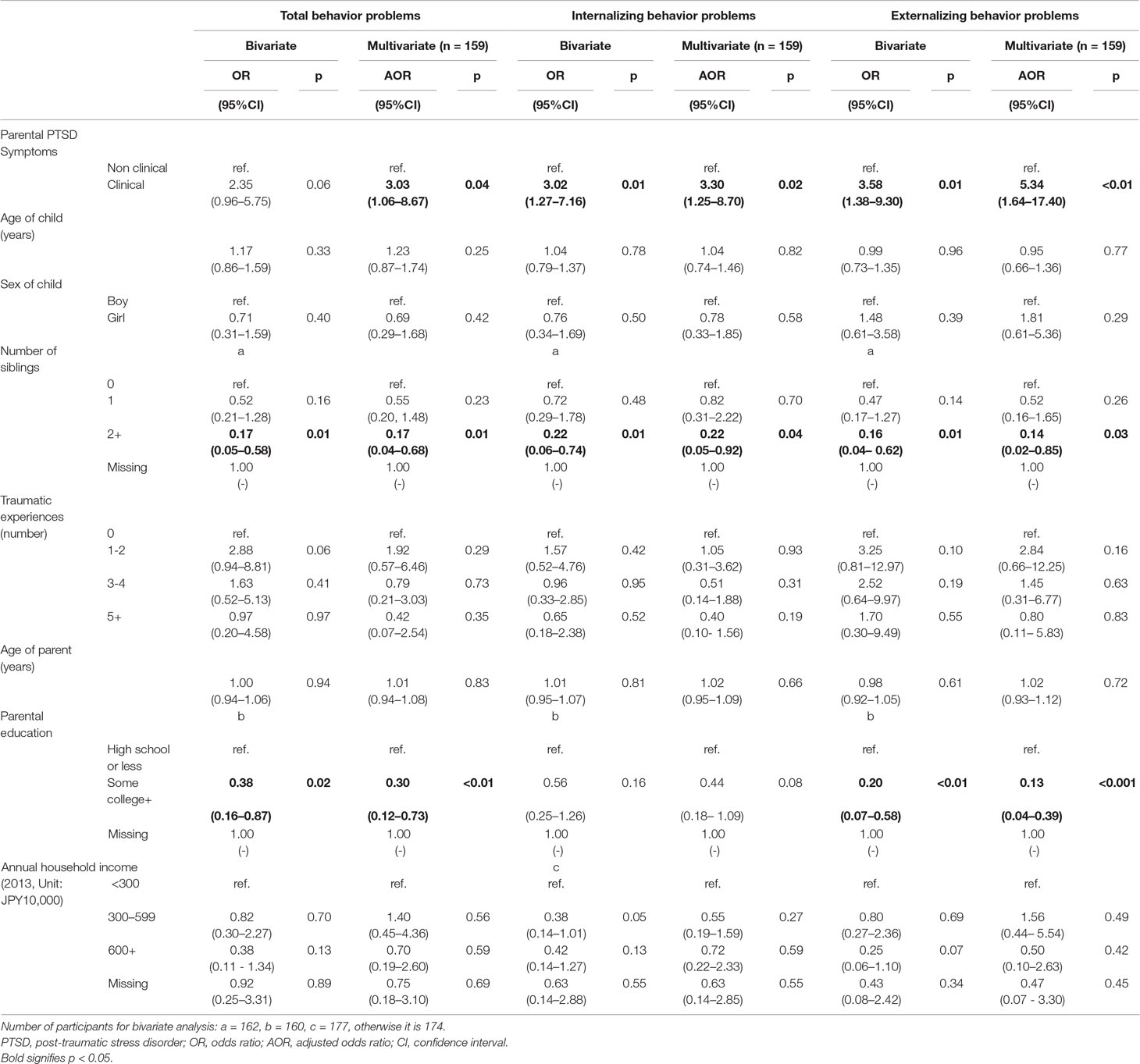 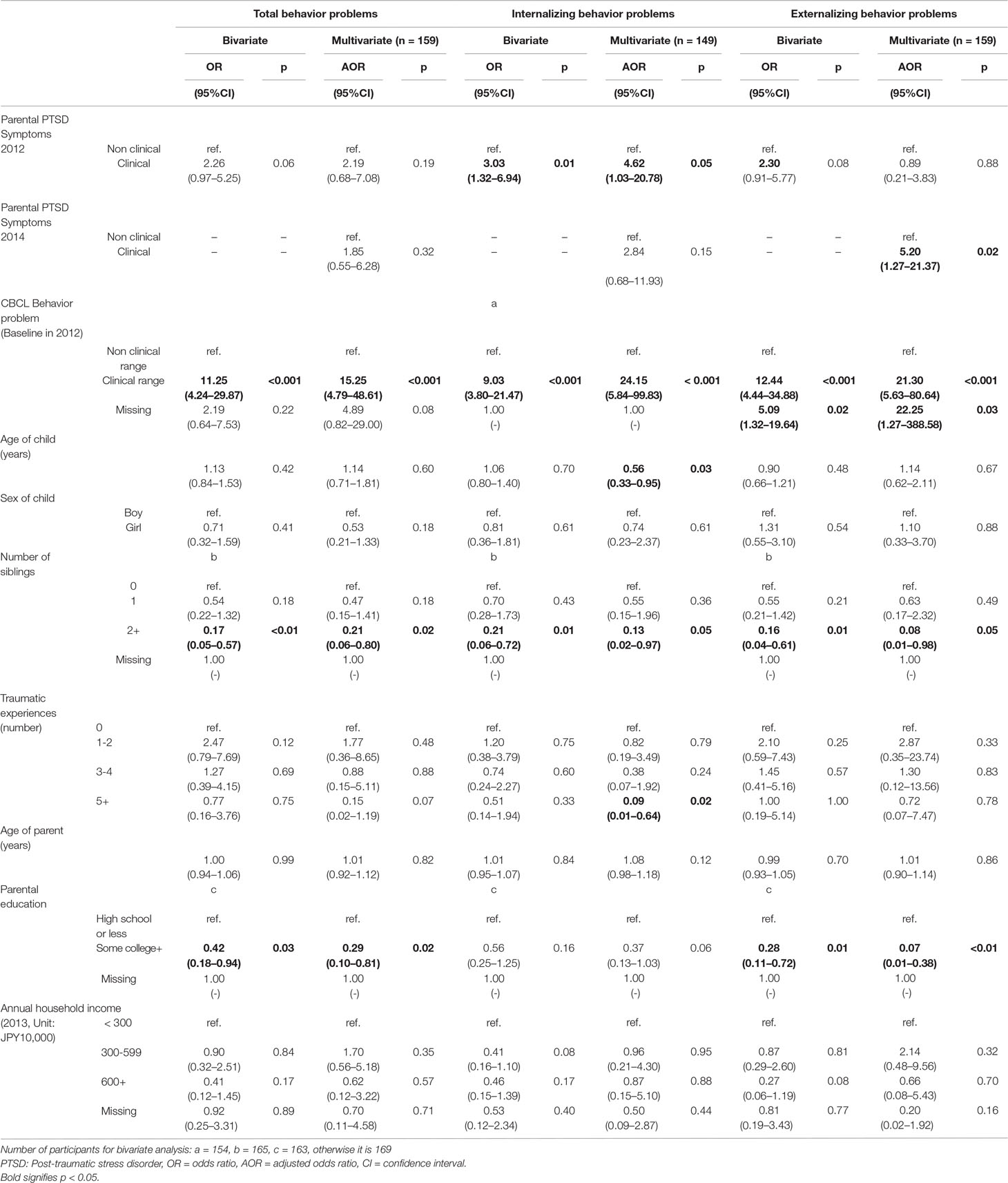 Table 5 Association between parental PTSD symptoms in 2012 and children’s behavioral problem in 2014.

The long-term persistence of parental mental problems and the behavioral problems of their offspring found in this study is consistent with studies of other disasters (17, 37, 38). Havenaar et al. (37) reported that being a mother and living in an affected area were significant risk factors for adverse mental outcomes 6.5 years after the Chernobyl disaster. Thordardottir et al. (38) conducted a multivariate analysis to assess the association between disaster-related factors and current symptoms among childhood survivors of an avalanche and reported that parents’ traumatic reactions were related to children’s PTSD even after 16 years in a follow-up survey. Furthermore, in a longitudinal study among survivors of Hurricane Katrina, which affected Southern Louisiana in the United States in 2005 (39), Lai et al. assessed the mental status of mothers at four time points continuously over the 2 years after the disaster. The results revealed that mothers’ mental status was strongly associated with the mental health symptoms (post-traumatic stress, depression, and anxiety) of their offspring, suggesting that initial mental status of mothers after the disaster had a long-lasting influence on the mental health of their children, even after mothers had recovered from depression (39).

Among the factors included in SES, income is considered as the critical factor which affects the mental health of the family members. Rijlaarsdam et al. (44) indicated that economic disadvantage affected both internalizing and externalizing problems of children, and maternal depressive symptoms and parenting stress play a vital role within its pathway. However, our primary result was not wholly consistent with the previous study, possibly because our research was implemented in disaster areas. That is, income level was not associated with trauma exposure (data not shown), suggesting that in the current area, income may not be confounder of the association. Further study will be needed to clarify the mechanism of the relationship between familial mental health and economic status under disaster settings.

Several limitations of the current study should be considered. First, our participants were not a representative sample of the parents or children affected by the GEJE. Because participation was on a voluntary basis, children with severe behavioral problems or parents with severe mental disorders who were undergoing counseling or psychiatric treatment may have been less likely to participate in this study. Second, only family-related factors were considered in this study, and even within in the family, the PTSD symptoms were measured only among parents. Further studies should incorporate the mental status of other family members as well as the possible influence of people outside the family, such as others in the neighborhood, preschool, or school, including teachers or friends. Third, although effort was made to maximize participation, the sample size of the current study was relatively small, limiting its statistical power. Fourth, there was no available information regarding participants’ mental health status before the earthquake. Therefore, it is difficult to clearly identify whether mental health problems among participants resulted from the impact of the earthquake or not.

Despite these limitations, it can be concluded from the current study that the impacts of a disaster continue to affect mental health of both parents and their offspring over a long period. These possibilities should be carefully considered in mental health services, such as psychological support or counseling for parents and their offspring in areas affected by disasters.

The original GEJE-FC study was approved by the ethics committees at the National Center for Child Health and Development and Tokyo Medical and Dental University. Ethical approval was also sought for this secondary data analysis from the Kyoto University Graduate School and Faculty of Medicine Ethics Committee.

MO, KN, HH, HM, JY, and TF conceived, designed, and conducted the GEJE-FC study. YH analyzed the data and wrote the first draft, and TF, MO-K, and MK finalized the manuscript. All authors approved the final version of the manuscript.

This study is supported by a grant from the Ministry of Health, Labour and Welfare (H24-jisedai-shitei-007) JSPS KAKENHI Grant-in-Aid for Scientific Research on Innovative Areas 4801 and additionally a grant from Kyoto University’s GSS program (a Leading Graduate School Program of the Ministry of Education, Culture, Sports, Science and Technology).

Copyright © 2019 Honda, Fujiwara, Yagi, Homma, Mashiko, Nagao, Okuyama, Ono-Kihara and Kihara. This is an open-access article distributed under the terms of the Creative Commons Attribution License (CC BY). The use, distribution or reproduction in other forums is permitted, provided the original author(s) and the copyright owner(s) are credited and that the original publication in this journal is cited, in accordance with accepted academic practice. No use, distribution or reproduction is permitted which does not comply with these terms.