Interpersonal Trauma and Risk of Depression Among Adolescents: The Mediating and Moderating Effect of Interpersonal Relationship and Physical Exercise

Rapid physical and biological changes, as well as rapid psychological development are observed during adolescence. This is especially pertinent in the present day when social relationships have a significant role on adolescents' mental health. Social relationships with family members, peers and teachers play an important role in building resilience of adolescents (10, 11), and having a stable and supportive family environment provides emotional and physical safety, as well as well-being to adolescents (12). Furthermore, having a positive relationship with family members has been deemed an indicator of a healthy family. This is supported by research that has found an inversed association between risk of depression and good family relationships (12), suggesting that having a healthy relationship with one's family can serve as a protective factor for depression. Direct effects of a dysfunctional family environment on incidents of depression in adolescents have also been documented (12–15). Relationships with peers and teachers at school are another critical factor during the psychological development of children. Similarly, high levels of support from teachers was found to reduce the risk of depression of students and have a positive effect on their academic achievements (16–18). Moreover, peer victimization was found to be a predictor of depression later on in adolescence (19, 20). These findings are unsurprising since adolescents' social network can influence one's mental health (21).

The present study was a cross-sectional study using a three-stage convenience sampling design conducted in Shenzhen City, China in 2017 (31). Two central districts (Luohu & Futian) were selected to conduct the study in stage one. A total of 11 middle schools (grade 7–9) and high schools (grade 10–12) in the two study districts were then randomly selected in stage two in an attempt to reduce researcher bias. In stage three, eight classes of each grade were randomly selected to again reduce bias and provide a large enough sample for the analysis.

All participants completed a self-reported questionnaire anonymously. The participants were advised their answers would be confidential and that their specific answers would not be shared with their respective school or teachers. The participants answered the questionnaire with the advice of trained school counselors upon request to ensure the accuracy of their answers. Ethics approval was obtained from the Ethics Committees of Shenzhen Mental Health Center.

The following demographic information was collected: sex, age, and academic record, and whether the participant was the only-child in the family.

Depression was assessed by the Chinese version of the Center for Epidemiologic Studies-Depression Scale (CES-D) which has been validated among Chinese adolescents (32). The depression score was calculated by summing the scores (ranging from 0–60), with a higher score indicating more severe depression.

A total sample of 2,200 potential participants completed questionnaires, the response rate was of 95.6%. We excluded participants who had missing, inconsistent or implausible value in the responses leaving 1,883 of participants for the final analyses. Among the 1,883 adolescents, 945 (50.2%) were males and 910 (48.3%) were females; the mean (SD) age was 15.26 (1.63) years; and 36.8% were the only child in the family. Most participants (90.4%) reported to engage in the physical exercise and 51.6% of all had experience of interpersonal trauma. The median score of interpersonal relationship was 7.0 (interquartile range 5–8) and the median score of depression was 13.0 (interquartile range 7–21). 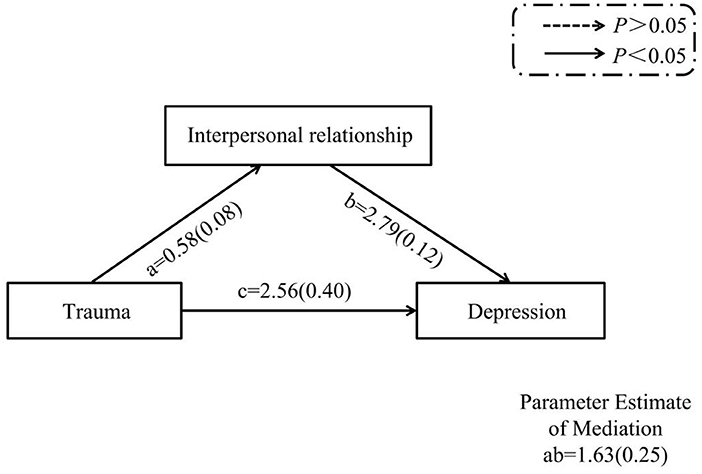 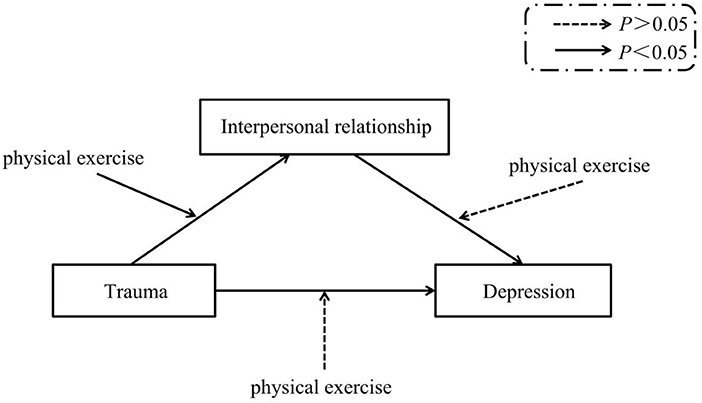 The present study found that interpersonal relationships had a mediating effect on the relationship between interpersonal trauma and the risk of depression in Chinese adolescents. These findings support previous studies. More positive relationships with school and family were found to reduce symptoms of depression, and family relationships were identified to affect the association between interpersonal trauma and depression in a US study (37). In a review of the literature, it has been suggested that if parents are physically available and act in a supportive manner this behavior may have a mediating effect of violence on adolescents (40). In contrast, there is an unawareness or misunderstanding by parents on how the exposure of trauma among adolescents might increase the risk of depression. Furthermore, among adolescents who had a more severe experience of violence, they were more likely to feel separation anxiety and have more negative maternal behaviors (41). This supports future research continuing to explore the impact of parental behavior on the risk of depression.

There are several limitations of the present study. Firstly, although a validated depression scale was used in the study, risk could not be avoided by using a self-reported data collection method. Physical exercise was measured by asking regular participation in physical activity, and not further categorized. Secondly, several questions in the questionnaire (interpersonal trauma) were designed via expert consultation, further validation should be conducted in the future. Thirdly, recall bias is inevitable in a cross-sectional study design, and the data were mainly collected based on self-report of information from the participants. Fourthly, the associations identified in the present study need to be further validated by a large-scale prospective study. Finally, the questionnaire asked about interpersonal trauma within the past 6 months. The implication of this is that it did not consider the impact of incidences of interpersonal trauma that took place before this 6-month period.

This research is exploratory and has led to several potential future lines of research that could be undertaken to better understand the risk of depression in Chinese adolescents. As indicated above, future research could consider the impact of interpersonal trauma which occurred over a longer period of time. A second avenue is that it would be interesting to conduct this study as a longitudinal study, potentially at two 6-month intervals to examine whether there are long term effects. In this case it would also be useful to look at anxiety and PTSD as well as depression. Sex differences should be considered, and type and length of exercise are further areas to research. A final avenue of research could examine the recovery from depression and the impact of interpersonal relationships and physical exercise in this case. Whilst it is important to examine factors associated with depression there is less research done on the recovery from depression and therefore this would be an important avenue for research.

The studies involving human participants were reviewed and approved by The Ethics Committees of Shenzhen Mental Health Center. Written informed consent to participate in this study was provided by the participants' legal guardian/next of kin.

This research was funded by the Shenzhen Science and Technology Innovation Committee (JCYJ20160429185235132), Medical Scientific Research Foundation of Guangdong Province of China (A2019155), Shenzhen Double Chain Grant [2018]256, and Sanming Project of Medicine in Shenzhen (SZSM201612079).

25. Sabaté E. Depression in Young People and the Elderly. Priority Medicines for Europe and the World “A Public Health Approach to Innovation”. WHO (2004).

Copyright © 2020 Chen, Peng, Liu, Wilson, Wang, Wilkinon, Wen, Cao and Lu. This is an open-access article distributed under the terms of the Creative Commons Attribution License (CC BY). The use, distribution or reproduction in other forums is permitted, provided the original author(s) and the copyright owner(s) are credited and that the original publication in this journal is cited, in accordance with accepted academic practice. No use, distribution or reproduction is permitted which does not comply with these terms.