Antidepressant medications are currently prescribed for a wide range of conditions, and an increasing trend in antidepressant prescriptions have been reported in many countries, including the United States, Australia, and some European countries (1–5). There are a number of reasons for this increase, including growing public awareness of depression, changes in patients’ attitudes, the expansion of therapeutic indications, and the impact of commercial interests (6, 7). In clinical practice, antidepressants are prescribed for many conditions other than depression, such as anxiety, sleeping disorders, psychosis, and neuropathic pain (3, 8). This has led to concern that antidepressants are being overprescribed.

The antidepressants available on the market have increased in recent years, providing prescribers with a variety of options. The choice of an antidepressant is influenced by drug profiles, physician characteristics, patient characteristics, regulation and reimbursement policies, and other factors (9). Antidepressants can induce several severe adverse effects, including self-inflicted injury, myocardial infarction, and stroke (10–12). Discontinuing or decreasing use of antidepressants, especially selective serotonin reuptake inhibitors (SSRIs), may lead to the appearance of withdrawal symptoms (13–15). Furthermore, concerns have been raised regarding whether the prescription of antidepressants is always justified (3). It is important to understand national trends and patterns of antidepressant use.

With the exception of one study that was restricted to patients with schizophrenia, little is known about the profile of antidepressant use in China (16). Therefore, this study aimed to describe the time trends and patterns of antidepressant prescriptions for adults from 2013 to 2018, using a large dataset.

This study was approved by the Ethics Committee of Sir Run Run Shaw Hospital, College of Medicine, Zhejiang University (Reference Number: 20191011-18). Informed consent was waived as part of the approval.

In the current study, outpatient prescriptions meeting the following criteria were extracted and included: (1) The prescriptions contained at least one antidepressant; (2) were prescribed for patients aged over 18 years; (3) were issued from 2013 to 2018; and (4) were issued in hospitals that participated in the program continuously during the study period and were located in Beijing, Tianjin, Shanghai, Guangzhou, Chengdu, or Hangzhou. No restrictions were imposed regarding indications because antidepressants are used to treat many conditions. However, prescriptions with incomplete information were excluded.

Subgroup analyses by age, sex, and drug class were conducted. Three age groups were created to determine whether the trends in antidepressant use were being driven by a particular age group. The three age groups were young adults (18–44 years), middle-aged adults (45–64 years), and older adults (65 years and older).

A total of 1,795,230 outpatient antidepressant prescriptions issued from 2013 to 2018 were reviewed in this study. These prescriptions were from 79 hospitals located in six major cities in China. All included hospitals were state-owned general hospitals. Of all the prescriptions, 42.1% were prescribed by psychiatrists and 33.0% were prescribed by neurological physicians. As Figure 1 indicates, both visits and expenditure increased over time (both P < 0.05). The prescribing of antidepressant medications increased substantially from 244,626 in 2013 to 348,717 in 2018, reflecting a 42.6% increase over the study period. A 34.9% increase in prescribing costs was found over the same period—from 48 million Chinese yuan in 2013 to 64.8 million Chinese yuan in 2018. 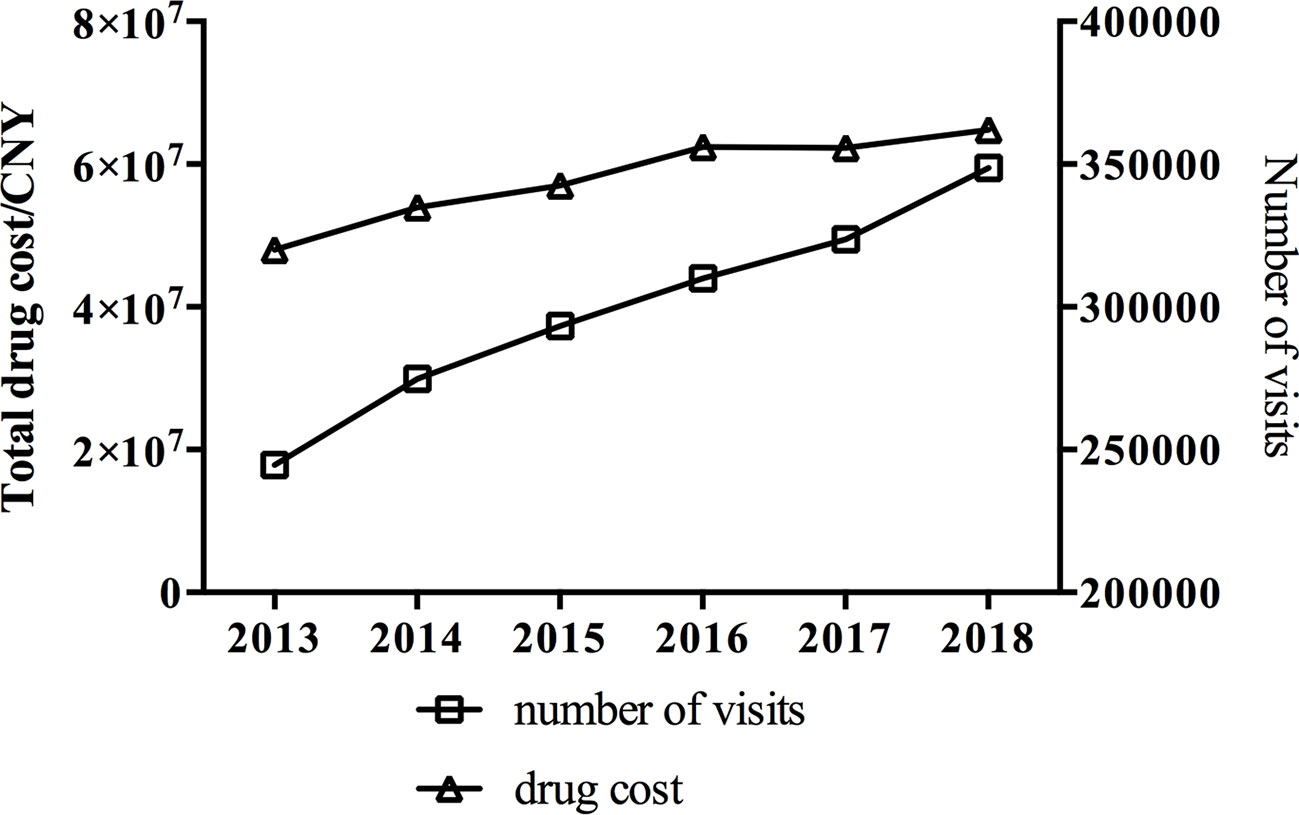 Figure 1 Trends in visits and cost of antidepressants in 79 hospitals located in six major cities in China from 2013 to 2018.

Trends by Age and Sex

We stratified the analysis of the trends in the number of antidepressant visits for any indication by age group and sex, and the results are shown in Table 1. The number of antidepressant visits for patients aged 18–44 years, 45–64 years, and 65 years and older all increased. Patients aged 45–64 years accounted for more than 40% of the visits. However, the percentage of older adult patients showed a small but significant increase over time (P < 0.05). Antidepressant drugs were more frequently prescribed to women, who accounted for 1.6 times more antidepressant visits than men (P < 0.05). However, the ratio of female-to-male users remained constant over the study period (P > 0.05).

Trends by Type of Drug

A total of 21 antidepressants in three drug classes were involved in this study. No instances of prescriptions for non-selective monoamine oxidase inhibitor (N06AF) or selective monoamine oxidase A inhibitor (N06AG) were observed. The antidepressant prescription visits and the percentage of the total prescriptions made up by each drug and drug class were examined, and the results are shown in Table 2. The total expenditure on antidepressant medications and the percentage of this accounted for by each drug are summarized in Table 3. 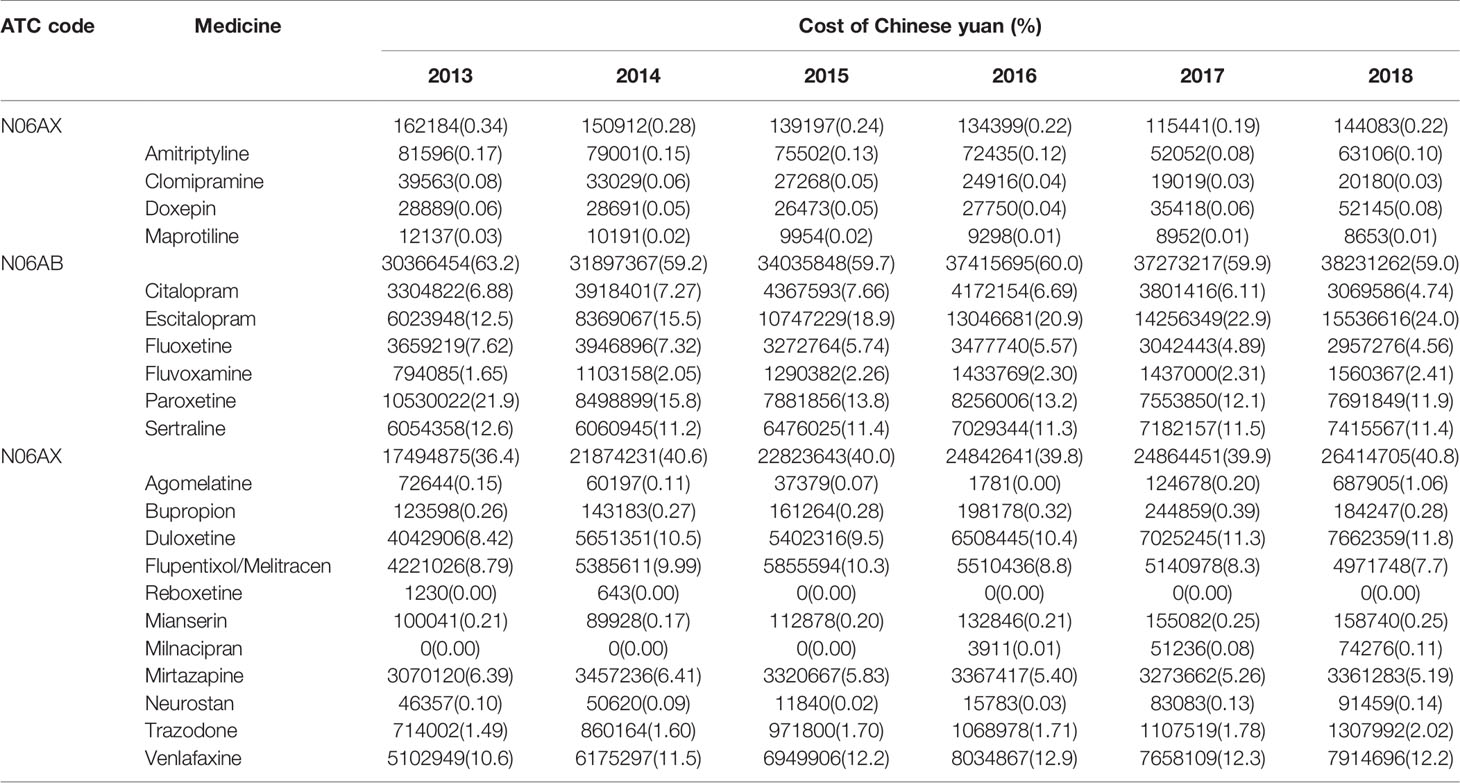 Table 3 Total expenditure on antidepressant medications dispensed from 2013 to 2018 by drug and drug class.

Our analysis showed that SSRIs accounted for nearly half of the antidepressant visits in China during the study period. However, our findings for the use of SSRIs were nevertheless lower than previous reports of SSRI use in other countries. In many countries, SSRIs are the predominant antidepressants, making up 60%–70% of the market (2, 27, 28). The clinical guidelines for treating depression suggest SSRIs (mostly escitalopram, paroxetine, and sertraline) as the preferred pharmacological treatment in adults (29, 30); however, the antidepressant efficacy of SSRIs is not superior to that of TCAs (31). SSRIs are also used to treat anxiety disorders, but the efficacy of SSRIs in this application is not superior to that of benzodiazepines (32). The reported overall adverse event rates of SSRIs and TCAs are comparable, but SSRIs are reported to have a lower incidence rate of cardiovascular effects and higher rates of neurogenic adverse effects (33). The percentage of the total antidepressant expenditure accounted for by SSRIs over the six years of study was almost 60%, indicating that SSRIs are relatively expensive. Considering that commercial interests have a major impact on the prescription of antidepressants, attention should be paid to the wide use of high-cost antidepressants (34, 35).

The prescription of TCAs was low despite these drugs having been the cornerstone of antidepressant pharmacotherapy for a long time. A similar trend has been observed in many other countries, although TCA use is still greater than SSRI use in Germany and an increasing trend has been reported for TCA use in the Netherlands (1, 4). The disadvantages of TCAs in terms of their cardiovascular side effects, high overdose fatality, and relatively great possibility of drug–drug interactions are responsible for the declining trend in TCA use (36, 37). However, other antidepressants—particularly SSRIs—also have serious problems because of withdrawal (14, 15). The higher use of TCAs than SSRIs in Germany suggests the important role of TCAs (1). The low price of TCAs is not a disadvantage, but this is another important reason for the decline (7).

A total of 21 antidepressant drugs were reported in this study. Flupentixol/melitracen, a mixture of a type of TCA and a classical antipsychotic component reported to be associated with significant improvement in quality of life independent of the presence of anxiety or depression, held the lead position in the antidepressant market from 2013 to 2018 (38). This is why the use of drugs in the other antidepressant class (N06AX) was much higher in our findings than in previous work in other countries. Some studies have suggested the efficacy of flupentixol/melitracen in treating resistant depression, ulcerative colitis, and several other conditions (39, 40). However, there is very limited evidence to support the use of this combination, and its popularity appears to coincide with marketing efforts. Flupentixol/melitracen is produced by a Danish company and is not registered in Denmark, the United States, the United Kingdom, Japan, or India (41). It can be assumed that flupentixol/melitracen is rarely used in these countries, despite the lack of reports on this. Special concern for safety and rational use should be raised regarding the wide use of this antidepressant with weak clinical evidence (42).

Escitalopram, the S-enantiomer of racemic citalopram, became the most frequently prescribed SSRI and moved into second place in terms of antidepressant prescriptions overall at the end of this study. This situation is quite different compared with other countries. The most commonly used SSRI in the United States, the United Kingdom, Italy, and Sweden has been shown to be citalopram, and sertraline has been reported as the most frequently used SSRI in Iran (2, 23, 24, 27, 43). Escitalopram is currently approved in over 100 countries and has been shown to have a good efficacy and safety profile (44–46). Escitalopram’s price varies by country. Although escitalopram was approved with a high price in some countries, previous studies have reported that escitalopram has a cost–utility advantage over other antidepressants in the treatment of major depression (47, 48). Escitalopram is expensive in China, elevating the total expenditure on SSRIs (Table 3). The pharmacoeconomic profile of the drug has not been evaluated for depression or other indications in China.

The studies involving human participants were reviewed and approved by Ethics Committee of Sir Run Run Shaw Hospital, College of Medicine, Zhejiang University. Written informed consent for participation was not required for this study in accordance with the national legislation and the institutional requirements.

This work was funded by the Health Commission of Zhejiang Province and Traditional Chinese Medicine Administration of Zhejiang, China (2017KY089 and 2016ZQ027). The funders played no role in this research.

The authors would thank Hospital Prescription Analysis Corporation Program of `China for collecting and providing the data.

Copyright © 2020 Yu, Zhang, Zheng and Yu. This is an open-access article distributed under the terms of the Creative Commons Attribution License (CC BY). The use, distribution or reproduction in other forums is permitted, provided the original author(s) and the copyright owner(s) are credited and that the original publication in this journal is cited, in accordance with accepted academic practice. No use, distribution or reproduction is permitted which does not comply with these terms.