Objective: This study aimed to investigate the Chinese norms for the Symptom Checklist 90 (SCL-90) scale and its application.

Conclusion: The usual model in China is not consistent with social development. Using two points as the critical value is no longer suitable for the SCL-90. New Chinese norms and measurement standards should be developed. The mean value plus one standard deviation could be used as the new measurement standard.

The Symptom Checklist 90 (SCL-90) is a psychosomatic screening scale proposed by Derogatis that is widely used in China and elsewhere (1). The SCL-90 can be used to distinguish between patients with and without psychosomatic diseases and has good reliability and validity (2, 3). However, the SCL-90 lacks widely accepted norms (4). The SCL-90 scale currently used in China was translated by Wang (5). For the translated version of the scale, Jin and Wu published a set of data of Chinese norms in 1986 that were based on data from 1,388 patients (6). Subsequently, many application studies have been performed in China, and these studies mainly included surveys of the general population and studies concerning the obstacles to large-scale screening. In 1999, Wang et al. (7) proposed a norm suitable for Chinese middle school students. In 1999, Tang et al. (8) proposed a combined norm based on 47,354 people by integrating the Chinese literature. Chen and Li (9) examined a sample of 2,808 people in 2003 and discussed the combined norm.

Regarding its application, an important problem with the scale is its relatively lack of time-effectiveness, which is not only a concern in populations with mental health concerns but also results in varying levels of performance at different times and in populations with different cultural backgrounds. Many studies concerning this issue were published as much as a decade ago. The norm for Wang's translation, which is currently used in China, was proposed in 1986 and is more than 30 years old. Since the Chinese economic reform policy was implemented in the 1980s, significant social changes have occurred in China, making it necessary to update the norms of the SCL-90. This study was performed to compare the differences between data from a current sample population and previously reported sample population data or norms and study the changes in different factors of the SCL-90.

These centers do not have ethics committees. Their role is to perform checkups for consumers but not patients, and they have no diagnostic responsibility. However, there is an electronic consent form (written in Chinese) that each subject (the consumer in the context of these physical examination centers) signs before the administration of the psychological tests. In section 10.1 of the electronic consent form, the following is presented: “The owner of this testing system has the right to perform analyses of non-sensitive data.”

The version of the SCL-90 translated by Wang was used (5).

The SCL-90 data of 7,489 persons evaluated in 2019 were compared with previously published norms. The data used for the comparisons were obtained from previously published Chinese studies and consisted of the following: (1) norm data of 1,388 people published by Jin et al. (6); (2) combined norm data of 47,354 people summarized in the literature by Tang et al. (8) in 1999; (3) data of 2,808 people from Hangzhou, China reported by Chen and Li (9) in 1999; and (4) a nationwide sample of 1,890 people in China presented by Tong in 2006 (4). Python software was used for the data analysis. Due to the large sample size, a z-test was used. A P-value < 0.05 was considered statistically significant. 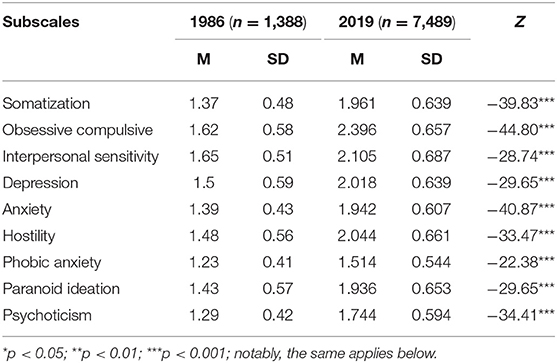 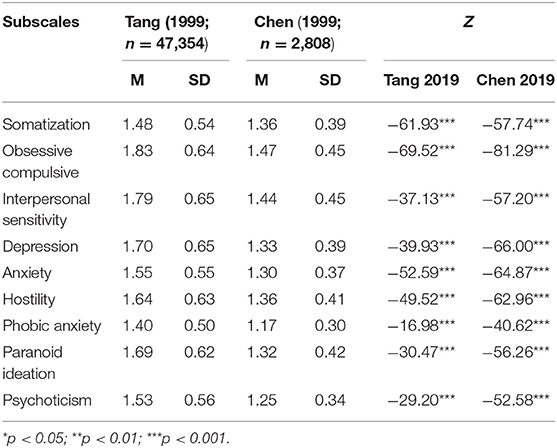 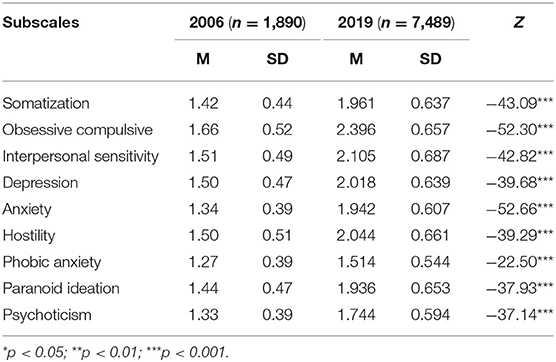 Figure 1 shows the differences in the scores across the five different sample populations. Figure 1 shows that the Chinese norms in 2006 are close to those in 1986, although there are differences. The scores of each factor increased annually. The comparison between the 2019 data and Tang's 1999 data shows the most obvious changes. The trends in the factor scores across the different sample datasets were generally consistent. All data sets showed that compulsion factors had the highest scores and that phobic anxiety factors had the lowest scores. The scores showed a tendency to decline from compulsion to anxiety, and the scores of psychosis were lower than those of paranoid ideation. 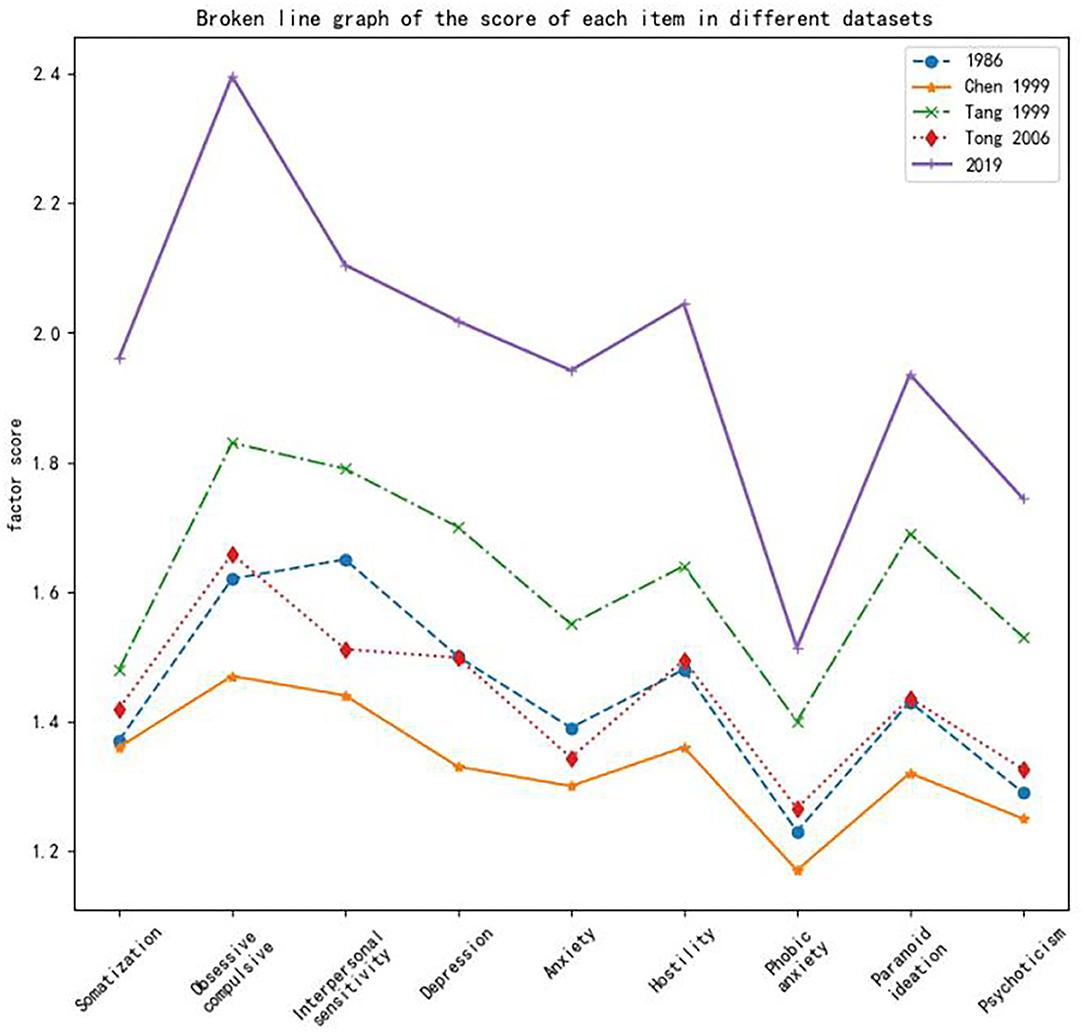 Figure 1. Broken line graph of the score of each item in different datasets. 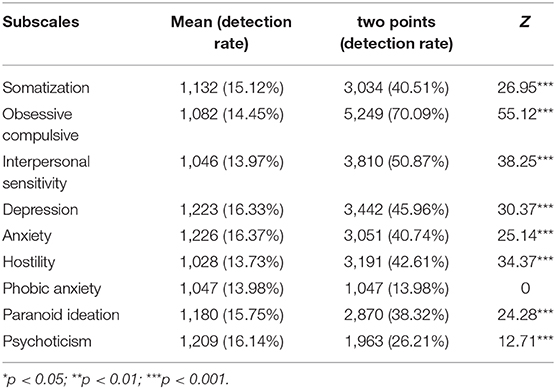 The SCL-90 scale is widely used worldwide (1, 11). The SCL-90 is a screening scale and needs to be revised regularly. China is currently using Wang's translated version from 1984 and the norms proposed in 1986, which are currently more than 30 years old. The rapid development of society has inevitably led to psychological changes in the Chinese population. If we continue to use the norms published 30 years ago for research, these data will be inconsistent with the current psychological status of the population. Therefore, this study compared the data of five large sample populations collected over time and concluded that the current population has notable differences from previous populations in several factors. Moreover, the scores of all factors tended to increase annually, which is consistent with the research by Tang, Chen and others. In this general upward trend, the differences between the neurotic and psychopathic factors were particularly prominent in the 2019 study. The neurotic features of the population, such as depression, anxiety, obsessive compulsive, and somatization, were significantly higher than the psychotic symptoms, such as paranoid ideation and psychoticism. The individuals included in this study were young people aged between 20 and 45 years who experienced high levels of pressure, which may have contributed to the high scores of various factors. The scores of each factor increased annually. Thus, it is inadvisable to continue to use the previously established norms, which are not consistent with how Chinese society developed, and new Chinese norms are urgently needed.

In previous studies, the sample sizes used to generate norms were not large and mostly ranged between 1,000 and 3,000 (4, 6, 9). Although the norms proposed by Tang et al. were based on data from 47,354 people, the data were obtained over the course of 7 years (8). However, the sample size in this study was 7,000, ensuring greater accuracy. The individuals included in this study were mostly enrolled at physical examination centers, enabling the inclusion of a large sample population due to the high degrees of mobility and compliance. This method is a feasible approach to obtaining large sample sizes in future studies. Most previous studies were conducted in hospitals. In recent years, studies conducted in physical examination centers have gradually increased (12, 13), but the sample size has remained small. This study can provide more information for the use of norms in physical examination settings.

Comparison With Norm Data From Other Countries

Because the sample populations used in this study were regional, there may be some differences from the norms applicable to China as a whole, and some errors are expected. Further studies will include sample populations from more regions for further analysis and research.

The studies involving human participants were reviewed and approved by the ethics committee/IRB of Tianjin Ciming checkup center.

This study was supported by grants from the Capital's Funds for Health Improvement and Research (2018-2-4112, 2020-2Z-4117); the Capital Characteristics of Clinical Application Research (Z171100001017086) provided by the Beijing Municipal Science and Technology Commission; the Space Medical Experiment Project of China Manned Space Program (HYZHXM03006); and the National Natural Science Foundation of China (61503208).

JJ, BY, JL, CF and HY are employees of Beijing Wanling Pangu Science and Technology Ltd.

Copyright © 2021 Dang, Xu, Ji, Wang, Zhao, Yu, Liu, Feng, Yu, Wang, Yu, Dong and Ma. This is an open-access article distributed under the terms of the Creative Commons Attribution License (CC BY). The use, distribution or reproduction in other forums is permitted, provided the original author(s) and the copyright owner(s) are credited and that the original publication in this journal is cited, in accordance with accepted academic practice. No use, distribution or reproduction is permitted which does not comply with these terms.