Obsessive-compulsive disorder (OCD) is characterized by persistent intrusive thoughts and repetitive actions, significantly affecting the patient's daily life. Most patients with OCD show comparatively early onsets, i.e., during their adolescence. There is a difference in onset peaks between males and females, with male patients having the peak in the mid-teenage years and female patients in the mid-twenties. This suggests that male OCD is affected strongly by genetic factors and comorbid neurodevelopmental disorders such as tic and autistic spectrum disorders, while female OCD is influenced by comorbid mood or anxiety disorders and life events such as marriage, pregnancy, and childbirth (1). From the aspect of cognitive behavioral theory, patients with OCD were fear conditioned by stimulants typical of the subject of the obsession at its onset. Subsequently, their avoidant behaviors, including compulsions, were maintained because those behaviors temporally alleviated their anxieties and fears. Mowrer described this process as a “two-process theory of learning” (2).

In the present study, to comprehend the pathophysiology of OCD, we examined a large sample of patients with OCD to identify the conditions around the onset, including stressful life events and traumatic experiences. First, we divided the participants into two groups (with or without stressful life events including traumatic experiences) around the time of the OCD onset. In addition, we identified a traumatic subgroup experiencing trauma within 1 month before the onset. To understand the relationship between onset conditions and the pathophysiology of OCD, we compared the clinical information and characteristics of these groups.

Participants were recruited from outpatients of the Department of Psychiatry of Kyushu University Hospital from January 2014 to December 2018. The inclusion criterion was that they meet the OCD diagnostic criteria of DSM-5. In this study, after acquiring informed consent, psychiatrists who specialize in OCD treatment conducted psychiatric interviews with the participants to obtain clinical information that included the background, comorbid condition(s), history of tic episodes, and past/current OCD symptoms. The global symptom severity of OCD patients was assessed using the Yale-Brown Obsessive-Compulsive Scale (Y-BOCS) (11, 12). The patients also completed the Hamilton Depression Rating Scale (HDRS) (13) and Hamilton Anxiety Rating Scale (HARS) (14) to assess the severity of depression and anxiety. OCD patients who had a history of neurological illness, other disorders of the central nervous system, or a history of substance abuse were excluded.

We defined events such as an entrance examination, marriage, childbirth, economic problems, occupational problems, personal relationship problems which were experienced within 1 year prior to the onset of OCD as “stressful life events.” Our questionnaire of the typical life events was cited from Scaling for Life Events by Paykel et al. (15). We adopted a semistructured, clinician-administered interview for this study. First, we asked the patients to recall the age at which symptoms of OCD first began. Second, the participants were also asked any stressful life events, referring the questionnaire, experienced within 1 year prior to the onset OCD. If there were other stressful life events within the period, participants also could describe them to the interviewer. Furthermore, we asked the participants about the traumatic event in detail. We defined traumatic experiences as those that were experienced within 1 month before the onset of OCD and had a strong impact on its onset directly.

The studies involving each participating patient were reviewed and approved by the Ethics Committee of the Kyushu University (No. 2019-216).

Two hundred eighty-one participants with OCD met the inclusion criteria of this study. Their ages ranged from 18 to 65 years. The participants were divided into two groups including a stressful life event-related OCD group (LE-OCDs) and a spontaneous-onset OCD group (Sp-OCDs) based on the presence or absence of stressful life events. Furthermore, we identified a subgroup of the LE group having traumatic experiences within 1 month before the onset (TE-OCDs). Demographic and clinical findings of the LE- or TE-OCDs and Sp-OCDs were compared. A two-tailed group t-test was used to determine statistical significance. For categorical data (i.e., sex, marital status, comorbidities), a chi-square test was used.

Table 1 shows the clinical background of each group. Around 60% of the participants (LE-OCDs, n = 172) experienced a stressful life event before the onset of OCD. In addition, 56.9% of LE-OCDs had experienced traumatic events within 1 month prior to the onset (TE-OCDs, n = 98). LE-OCDs showed a significantly later onset age (p = 0.007) and a higher rate of marriage (p = 0.008) compared with Sp-OCDs. 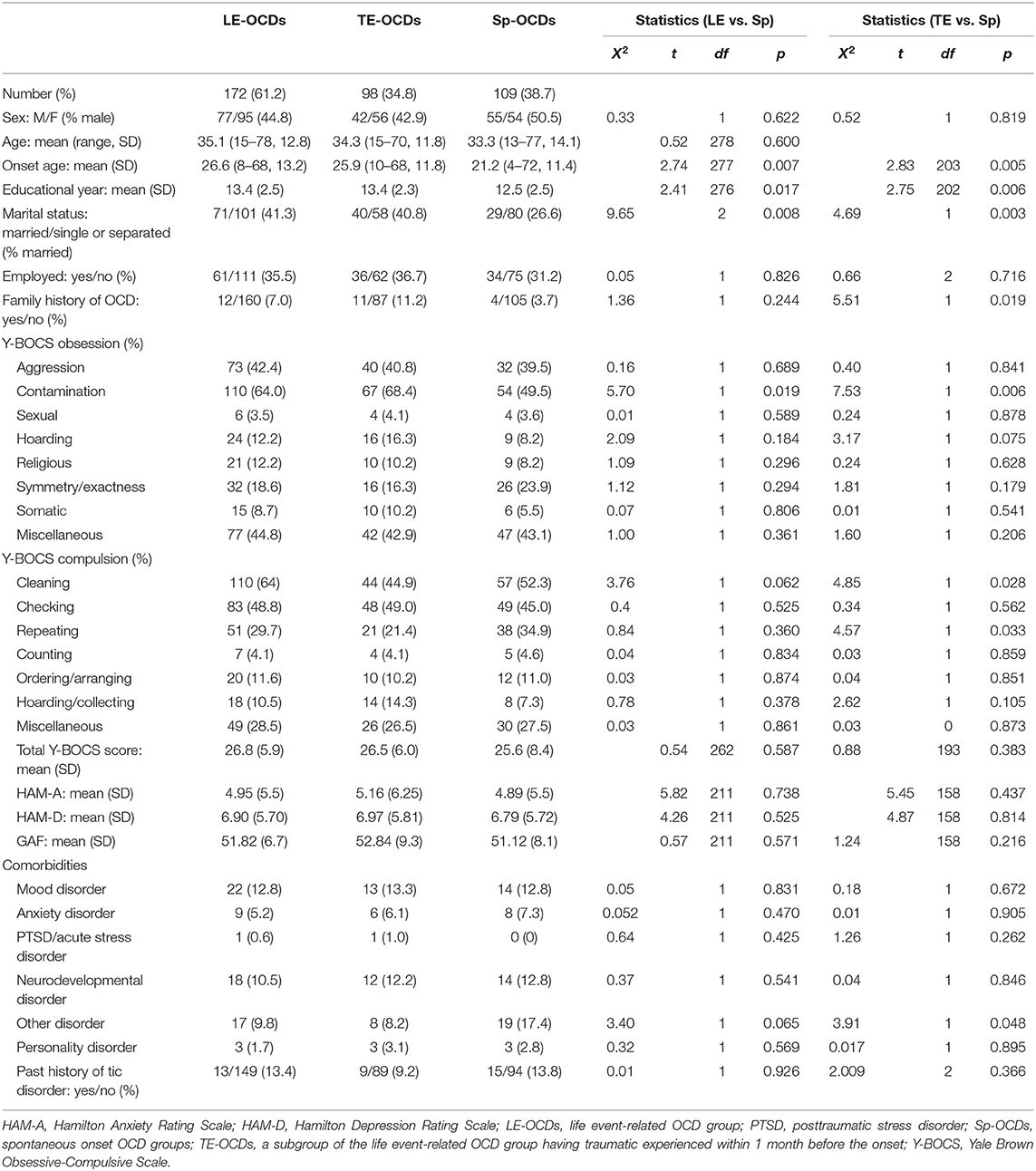 Concerning Y-BOCS symptoms, LE-OCDs showed significantly more contamination/fear symptoms compared with patients with Sp-OCDs (p = 0.019). Furthermore, TE-OCDs showed a tendency toward hoarding obsessions compared with Sp-OCDs (p = 0.075). There was no difference between LE-OCDs/TE-OCDs and Sp-OCDs in the severity of Y-BOCS symptoms. There was no difference between these groups in the rates of comorbid mental illness.

Tables 2, 3 show the types of life events and concrete examples of traumatic experiences. 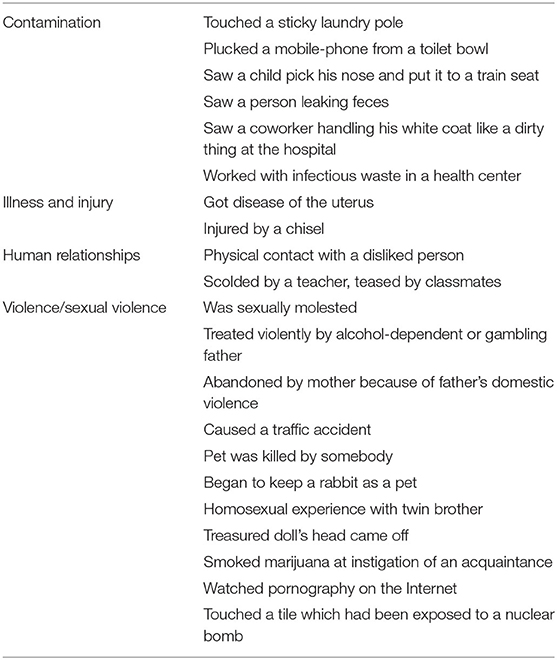 Patients with OCD show diverse symptoms such as washing rituals with contamination fear, checking rituals with aggressive thoughts, symmetry/ordering, or sexual/religious ideation. Not a few patients experience diverse incidents as a “trigger” before the onset of OCD. In our previous study (10), some patients had direct incidents such as “running over a cat with his car,” “splashing toilet water while assisting a family member,” “classmates letting an insect run over her,” or “making a mistake on her job.” Other patients had triggers that were not serious incidents but subjectively shocking such as “having a disliked classmate touch his game machine” or “lending a pencil that became contaminated with a classmate's sweat.”

Similarly, the participants with traumatic experiences (TE-OCDs) showed various experiences in the present study (Tables 2, 3). Some patients had direct incidents such as “plucked a mobile phone out of a toilet bowl,” “being injured with a chisel,” “causing a traffic accident,” or “having a pet killed by somebody.” Other patients had triggers that were not serious incidents but were subjectively shocking, such as “seeing a child pick his nose and put it on a train seat,” “being touched by a disliked person,” or “seeing pornography on the internet.” Grabe et al. reported that there was no significant association of traumatic experiences with subclinical PTSD or PTSD in patients with OCD compared with controls (19). Actually, though most of these incidents do not meet the original meaning of trauma, they had enough impact to cause the onset of OCD. Therefore, these incidents are “traumatic” for the patients with OCD.

Fontenelle et al. conducted an epidemiological study of 1,001 patients with OCD and reported that 19% of them had comorbid PTSD (20). They also found that posttraumatic OCD is characterized by high rates of late-onset aggression/sexual/religious/hoarding symptoms and comorbid anxiety/mood disorders. Their finding showed that patients with late-onset OCD often had experienced traumatic incidents compared with early-onset, genetic OCD. Meanwhile, we speculated that patients with early-onset OCD also developed their illness after traumatic incidents because of their neurodevelopmental traits and low tolerance for stress. Actually, in our previous study (10) and another Japanese study (21), most cases that experienced a traumatic incident before the onset of OCD were male children with contamination/fear symptoms. While some of them experienced direct exposure to contaminants, the others felt subjectively dirty and disgusted when a disliked person touched them. It is suggested that some patients with contamination/washing are conditioned with disgust, while patients with OCD are generally conditioned with anxiety or fear. Patients with contamination/washing symptoms, therefore, often develop OCD after traumatic experiences. Concerning the association of onset with trauma, the theory of preparedness proposed by Seligman (22) could explain our hypothesis. Seligman suggested that individuals with high preparedness could be conditioned by just one trial, and that the conditioning could become very strong (23). Because most juvenile OCD patients have neurodevelopmental disorder and show low tolerance for stress and lack experience in controlling disgust stimuli, they could be easily and strongly conditioned with a low impact trauma.

In addition, though the difference was not statistically significant, the TE-OCDs showed more hoarding obsessions. Prezeworski et al. reported that patients who had hoarding symptoms alone had experienced higher rates of physical assault and transportation accidents prior to symptom onset than those with OCD symptoms alone (23). These results suggested that hoarding may have a close relationship to traumatic events.

In conclusion, a certain number of patients with OCD had traumatic incidents at the onset, but the contents and severities of their traumas are diverse. Although their experiences do not meet the standard definition of trauma, they can affect the onset of OCD to no small extent. Because OCD has a diversity of etiologies including early onset with neurodevelopmental factors and late onset with cognitive factors, there might be large individual differences in tolerances of and responses to traumatic experiences.

The present study has several limitations. Though we employed large samples of OCD patients and diagnosed them by detailed clinical interviews, we could not perform structured interview for DSM-IV (SCID) for their diagnosis. For the same reason, because we could not conduct SCID for comorbid disorders, the comorbidity ratios were generally low. Second, we did not define the objective criteria for traumatic experiences. Third, the current study had a recall bias since traumatic incidents and stressful life events were identified by retrospective interview. The data we obtained, therefore, have a possibility of factual inaccuracy. Fourth, there might be Berkson's bias since the participants were recruited from the university hospital. Fifth, we did not collect the quantitative data of the stressful life events and the traumatic experiences. We, therefore, could not perform regression analysis to clarify the relationship between the stressful life events and the onset OCD. Sixth, this study did not show the information about treatment implication associated with stressful life event and OCD. Gershuny et al. (24) reported that refractory OCD patients has been associated with the presence of a history of trauma. Alemany-Navarro et al. (25), meanwhile, founded that stressful life events at onset were not the predictor of treatment response for SRIs. Future research will be necessary to elucidate the effect of the environment at onset OCD for the treatment response.

The study was approved by an ethics committee of Kyushu University (no. 2019-216), and each participating patient provided written informed consent after receiving a complete description of the study.

Copyright © 2020 Murayama, Nakao, Ohno, Tsuruta, Tomiyama, Hasuzawa, Mizobe, Kato and Kanba. This is an open-access article distributed under the terms of the Creative Commons Attribution License (CC BY). The use, distribution or reproduction in other forums is permitted, provided the original author(s) and the copyright owner(s) are credited and that the original publication in this journal is cited, in accordance with accepted academic practice. No use, distribution or reproduction is permitted which does not comply with these terms.