Objective: The purpose of this study is to evaluate whether the impulse inhibition ability with methamphetamine dependents would vary at different abstinence stages.

Methods: Sixty-three methamphetamine dependents, including 31 short-term (< 10 months) and 32 long-term (≥ 10 months) abstinence participants, were recruited for this study. In addition, 33 men were recruited as the healthy control (HC) group. All participants performed a two-choice oddball task, which is well-established to assess impulse inhibition. Accuracy for deviant trials and deviant–standard reaction time (RT) delay were computed as indexes of impulse inhibition.

Results: The accuracy for deviant trials was significantly decreased in short-term abstinence subjects (90.61%) compared to HC subjects (95.42%, p < 0.01), which was coupled with a shorter RT delay reflecting greater impulsivity in the short-term group vs. the HC group (47 vs. 73 ms, p < 0.01). However, impulse inhibition was improved in the long-term group, shown by the increased accuracy for deviant trials in the long-term group compared to the short-term group (94.28 vs. 90.61%, p < 0.05) and the similar accuracy for the long-term and HC groups (p > 0.05). Further regression analyses confirmed that the abstinence duration positively predicted impulse inhibition of methamphetamine dependents, both in accuracy and RT for deviant stimulus (β = 0.294, p = 0.019; β = 0.337, p = 0.007).

Impulsivity is defined as a predisposition toward rapid, unplanned reactions to internal, or external stimuli regardless of the potential negative consequences of these reactions (1–3). Impulsivity is associated with an increased likelihood of addiction (4), attention deficit hyperactivity disorder (5), and even antisocial behavior (6). Therefore, the ability to inhibit impulses is extremely important for humans.

Methamphetamine (MA) dependence induces impulsivity (7) and causes cognitive function decline (8). Previous research studies have investigated the negative impact of MA use in the Stop-signal task and Stroop task, showing a longer stop-signal RT (9) and higher error rate (10) in MA dependents. On the other hand, the MA dependent showed significantly worse performance on a test of processing speed (11). Moreover, evidence has shown that 56% of MA users have engaged in aggressive behaviors in social situations (12). These studies indicate that MA dependents have an impulse inhibition deficit.

Several studies have shown neural abnormalities in MA dependents, which can serve to promote impulsivity in MA dependents. One study showed that the basal ganglia of MA dependents were different from those of healthy humans; for example, they showed increased extracellular dopamine concentrations and reduced availability of dopamine transporter (DAT) (13). In addition, MA dependents were found to exhibit abnormal functional connectivity in the corticostriatal circuits, and the resting functional connectivity of the midbrain with the prefrontal cortex (PFC) in abstinent MA dependents was stronger than that in HC subjects (14). Interestingly, one study showed that no difference between long-term abstinent MA dependents and HCs in Stroop RT interference (15). In addition, one study found that a 2-week period of withdrawal improved the right DAT binding and the executive control in MA dependents, suggesting an improvement of prefrontal cognitive control function after abstinence (16). Based on the evidence above, we hypothesized that long-term abstinence (i.e., 10 months or longer) may improve impulse inhibition in MA dependents. To test this hypothesis, the current study investigated the differences of impulse inhibition across different abstinence stages (short-term and long-term) in MA dependents using the two-choice oddball task.

Sixty-three MA dependents who met the Diagnostic and Statistical Manual of Mental Disorders (5th edition) criteria from Da Lian Shan Addiction Rehabilitation Center were recruited for the current study. They were received compulsory drug treatment when they were detected by police for last drug use, and they have no chance to use drug in the next 2 years. The eligibility criteria included no use of drugs other than MA, no physical disability, and no acute physical or psychiatric illness. The exclusion criteria included the use of multiple drugs, current medical conditions and medication use, and the receipt of brain stimulation therapy (Transcranial Direct Current Stimulation or Transcranial Magnetic Stimulation). To balance the sample size between short- and long-term groups, we designated 31 participants who had abstinence periods < 10 months [mean ± SD, [6.17 ± 2.60] months, median 7 months, range 0.17–9 months] as the MA-short group; 32 participants who had abstinence durations ≥ 10 months [mean ± SD, [13.13 ± 1.93] months, median 13.17 months, range 10–17.17 months] served as the MA-long group. The two groups were matched on variables related to history of MA use, such as maximum intake (p > 0.05), average intake weekly (p > 0.05), and years of MA use before abstinence (p > 0.05).

All participants were right-handed and had normal or corrected-to-normal vision. All the participants participated in the study voluntarily and gave written informed consent. The study was approved by the local ethics committee of human research at Sichuan Normal University and Southwest University in China. The experimental procedures followed the ethical principles of the 1964 Declaration of Helsinki.

In the two-choice oddball task, each trial started with a jittered fixation cross, varying from 500 to 1,500 ms. Following this, the task stimulus was presented. For one-half of the participants in each treatment group, if the standard stimulus (“W”; 80% of trials) was presented, they were to press “F” with their left index finger as quickly as possible. If the task stimulus was the deviant stimulus (“M”; 20% of trials), they were to press the “J” key with their right index finger. For the second half of the participants, the response keys were reversed (i.e., they were to press “J” for standard stimuli and “F” for deviant stimuli). Before the formal task, each participant had completed 15 practice trials to familiarize them with the procedure. To avoid the practice effect, the formal experiment did not start until participants had achieved 100% accuracy for both standard and deviant stimuli during practice. At the end of the experiment, participants were told their accuracy as feedback on their performance. Behavioral impulsivity was primarily indicated by the levels of accuracy reduction (i.e., standard minus deviant stimuli accuracy, ACC cost), during deviant vs. standard trials (18). The deviant minus standard RT delay was also recorded to provide context for how ACC cost was altered.

Where appropriate, one-way analysis of variance (ANOVA), student's t-test, and chi-square test were used to compare the differences in demographic variables among the HC, short-term abstinence, and long-term abstinence groups. To analyze the impulse inhibition of participants in the two MA dependence groups compared with that of the HC group, the Bonferroni comparison was used for post-hoc comparisons after a statistically significant one-way ANOVA effect appeared. Linear regression was computed with duration of abstinence as predictor and accuracy for deviant stimulus, RT for deviant stimulus, ACC cost, or RT delay as the outcome, respectively. All statistical analyses were performed with SPSS 22.0 (IBM, Armonk, NY). 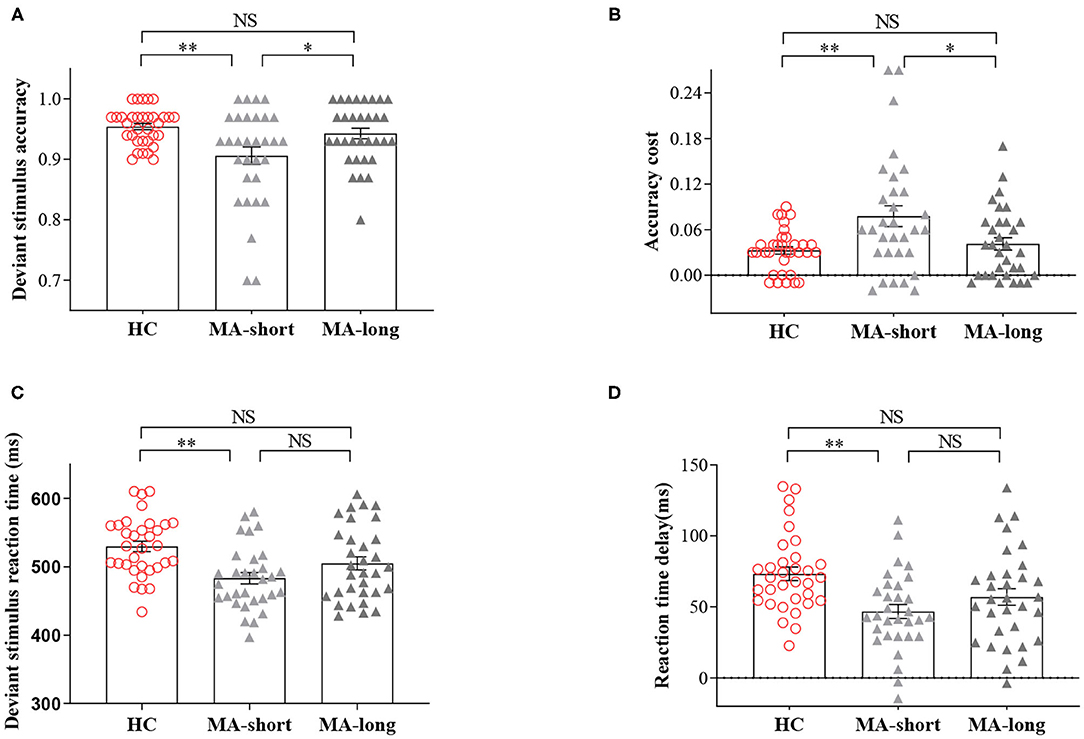 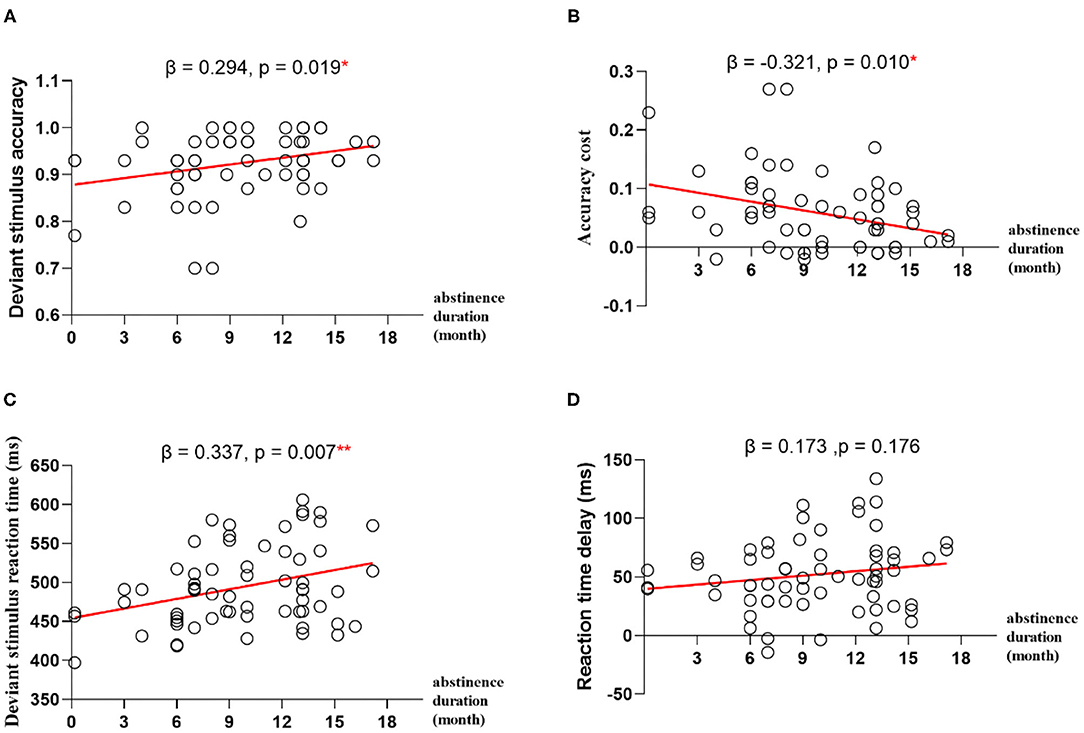 Increasing evidence suggests the cognitive capacity and brain functions of the long-term abstinence can be improved in MA users (20). A longitudinal positron emission tomography study documented the improvement of striatal DAT loss in MA dependents within 12–17 months of abstinence (21) and the improvement of thalamic metabolism within a mean of 14 months of abstinence. In contrast, neither of these improvements were observed in short-term abstinence (22). However, none of the prior studies have directly examined what the abstinence duration affects MA-induced differences of impulse inhibition. Here, our study demonstrated that the MA-short abstinence group exhibited worse performance on the two-choice oddball task than the HC group, while these performances were not observed after 10 months of abstinence. These results suggest that it is important to provide more intervention resources to patients in the early stage of rehabilitation than the late stage, particularly concerning the reduction of impulsive drug reuse (23).

This study has several limitations. First, we only included male MA dependents because males were more likely to use MA. Considering the differences in behavioral impulsivity related to drug use between men and women (24), women should be recruited in future research. Second, this study used a cross-sectional approach, and the neural plasticity mechanisms supporting the improved impulse inhibition over time were unknown. Thus, future investigations employing longitudinal neural imaging are necessary.

In summary, the present results suggest that behavioral inhibition deficits persist for about 10 months after MA abstinence. Long-term abstinence beyond 10 months may improve the patients' impulse inhibition to a level similar to that of the healthy population.

The studies involving human participants were reviewed and approved by Human Subjects Ethics Sub-committee of the Sichuan Normal University in China. The patients/participants provided their written informed consent to participate in this study.

This study was funded by the National Natural Science Foundation of China through grants 31871103 and 31971018 to JY.

We would like to thank Xinyu Cao for his assistance in interviewing the participants.

Copyright © 2021 Liu, Tian, Yan and Yang. This is an open-access article distributed under the terms of the Creative Commons Attribution License (CC BY). The use, distribution or reproduction in other forums is permitted, provided the original author(s) and the copyright owner(s) are credited and that the original publication in this journal is cited, in accordance with accepted academic practice. No use, distribution or reproduction is permitted which does not comply with these terms.