Background: Glycine receptor antibody-associated neuropsychiatric disease is currently known to be dominated by the phenotypes stiff-person syndrome and progressive encephalomyelitis entailing rigidity and myoclonus. In our case series we aim to depict the less-often reported feature of cognitive impairment associated with glycine receptor antibodies.

Methods: We investigated five patients with cognitive impairment varying from mild cognitive impairment to dementia associated with serum glycine receptor antibodies. Mild and major neurocognitive disorders were diagnosed according to the DSM-5 (fifth edition of the Diagnostic and Statistical Manual of Mental Disorders). Neuropsychology via Consortium to Establish a Registry for Alzheimer's Disease (CERAD) testing results, psychopathology data via the Manual for the Assessment and Documentation of Psychopathology in Psychiatry (AMDP), cerebrospinal fluid analysis and magnetic resonance imaging data were retrospectively analyzed from patient files.

Conclusions: Our results suggest that axonal neurodegeneration and especially impaired verbal memory recall in addition to deficits in verbal and figural memory characterize patients with progressive cognitive impairment associated with glycine receptor antibodies. This unresolved issue should be clarified by researchers to discover whether axonal degeneration is merely an age-related phenomenon or one related to glycine-receptor autoantibodies in old age. Cognitive impairment as a neuropsychiatric syndrome of glycine-receptor antibody disease is a potential, conceivable, but so far unproven additional feature requiring deeper large-scale investigations and consideration during differential diagnosis in memory clinics.

We investigated five patients from the Department of Psychiatry and Psychotherapy and Neurology University Medical Center Göttingen presenting serum glycine-receptor antibodies and cognitive impairment extending from mild cognitive impairment (MCI) to dementia. Dementia (major neurocognitive disorder) was diagnosed according to the definition of the fifth edition of the Diagnostic and Statistical Manual of Mental Disorders (DSM-5) (9) involving higher cortical dysfunction in addition to disability in daily living. To categorize the severity of cognitive impairment, we applied the DSM-5 classification distinguishing between mild and major neurocognitive disorder. A mild neurocognitive disorder corresponds to the term MCI and was diagnosed if the patient exhibited a mild neurocognitive disorder and had no disability or problems with daily activities. We applied the Consortium to Establish a Registry for Alzheimer's Disease Plus (CERAD) for neuropsychological assessment. Z-score calculations relied on normative data and the translated German version of the CERAD. We used a CERAD software (CERAD-Plus) that calculated z-score results without additional analysis from our staff. Patients' CSF probes were examined in the Neurochemistry Laboratory of the Department of Neurology, University Medical Center Göttingen. The following in-house, unpublished normative values established in the Neurochemistry Laboratory of the Department of Neurology, University Medical Center Göttingen were used to determine if the biomarker levels were within the non-pathological range. Non-pathological values were declared when we detected these constellations: (a) tau protein: <450 pg/ml, (b) phosphorylated tau protein 181 (ptau181): <61 pg/ml, (c) ß-amyloid 42 (Aß42): >450 pg/ml, and (d) ratio Aß42/Aß40 × 10: >0.5. The levels of CSF total tau and phosphorylated tau protein 181 (ptau181) were manually quantified using the commercial enzyme-linked immunosorbent assay (ELISA) from Fujirebio [INNOTEST hTAU-Ag; INNOTEST PHOSPHO TAU (181P)]. CSF Biomarker Aß42 was manually measured utilizing the commercially available INNOTEST® β-AMYLOID (1–42) ELISA kit (Fujirebio). CSF Aß40 was manually measured through commercially available ELISA from IBL [AMYLOID BETA (1–40)]. Antibodies against the alpha 1 glycine receptor were determined taking an immunocytochemical approach by transfecting cells with the glycine receptor alpha1 subunit and later fixation of those cells on arrays used for analysis in the Euroimmun Laboratory, Lübeck. We examined the following antibodies in all patients in serum and the CSF: anti-α-amino-3-hydroxy-5-methyl-4-isoxazolepropionic acid receptors 1/2 (anti-AMPAR1/2), -Amphiphysin, -Aquaporin 4, -contactin associated protein 2 (CASPR2), -CV2, -dipeptidyl-peptidase-like 6 protein (DPPX), -Flotillin 1/2, -gamma aminobutyric acid B1/2 receptor (GABAB1/2R), -glutamic acid decarboxylase (GAD65), -HuD, -LGI1, -Ma1/ Ma2, -N-methyl-D-aspartate receptor (NMDAR), -Ri, -SOX1, -TR, -Yo, and -Zic4 antibodies. Psychopathology was assessed by the Manual for the Assessment and Documentation of Psychopathology in Psychiatry (AMDP) (10). 1.5 T MRIs were done in the Department of Neuroradiology, University Medical Center Göttingen or off-site at neuroradiologic centers and visually evaluated by neuroradiologists. No specific algorithm was used to quantify brain atrophy. The patient's age was considered when assessing brain atrophy. Clinical features were extracted retrospectively from patient files. Autoimmune indicators were adapted from recent guidelines on autoantibody-associated psychiatric syndromes (11). This study was conducted in agreement with the latest version of the Declaration of Helsinki and was approved by the Ethics Committee of the University Medical Center Göttingen.

Our patients had an average age of 72 ± 4 years (3 females) (Table 1) and an age at disease onset of 64 ± 5 years. All had serum autoantibodies against glycine receptors. Three patients revealed an MCI, and two had dementia. The patients' neuropsychiatric syndromes ranged from cognitive dysfunction to idiopathic Parkinson's syndrome. Additional neuropsychiatric comorbidities were present ranging from carpal tunnel syndrome to polyneuropathy. Other comorbidities are depicted in Table 2. According to their sum scores in decreasing order, our patients' psychopathologies revealed disorders of attention and memory, affect, formal thought, and orientation (Table 1). Not apparent were disorders of consciousness, worries and compulsions, delusions, disorders of perception, ego disturbances, circadian disturbances, social withdrawal, excessive social contact, aggressiveness, suicidal behavior, self-harm, lack of feeling ill, lack of insight into illness, and uncooperativeness. Strong indicators of autoimmunity were present in 1 patient (20%) with abnormal movements, and in another patient (20%) with paresthesia (Table 1). These strong indicators of autoimmunity were not apparent: aphasia, mutism, dysarthria, autonomic disturbances, central hypoventilation, decreased level of consciousness, epileptic seizures, faciobrachial dystonic seizures, focal neurological deficit, hyponatremia, infectious prodrome, new-onset headache, adverse response to antipsychotic or antidepressant drugs, optic hallucinations, other autoimmune disorder, presence of a tumor or a neuroleptic malignant syndrome. No patient revealed a weak indicator of autoimmunity such as confusion, a dynamic course, early resistance to therapy, or fluctuating psychopathology. Brain MRIs revealed generalized brain atrophy in 2 of 5 (40%) and focal brain atrophy in 1 of 5 (20%) patients. The focal atrophy in one patient affected mainly the hippocampal formation together with mild general brain atrophy. Vascular lesions were detected more often in 3 of 5 (60%) patients, but they were clinically not symptomatic, as the affected patients had suffered no ischemic attacks or enduring focal neurological deficits. 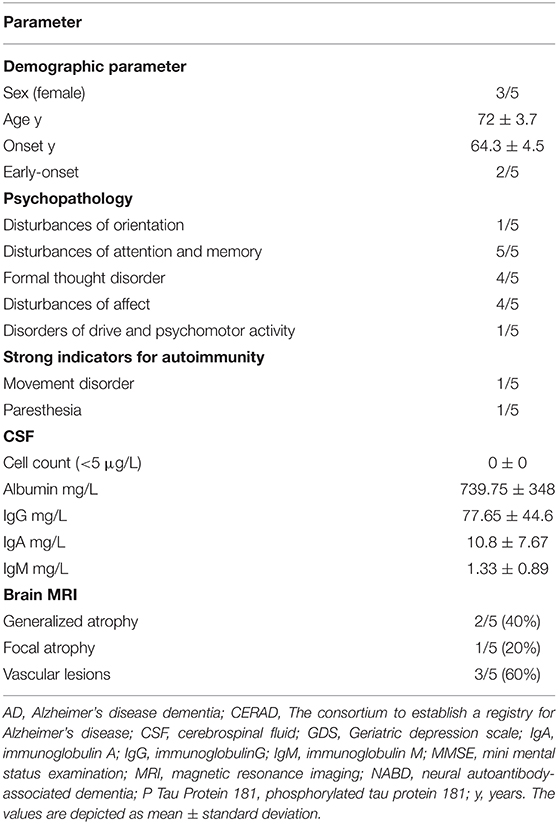 However, we find it curious that memory is so severely impaired while other cognitive domains remain relatively mildly affected, like cognitive flexibility, although 75% of patients present a tauopathy that should be accompanied by frontal manifestations of tau deposits also. Furthermore, it is conceivable that it is not the autoantibodies per se that are relevant to memory impairment in our patients, but rather the tau depositions in limbic areas such as the hippocampus that could also induce memory impairment. We cannot rule out that our case series' tauopathy may also be age-related. It might help in future studies to compare MRI volumetric data on different regions of interest at the disease onset with follow-up MRIs to better delineate a relationship between neurodegeneration and glycine-receptor autoimmunity. The phenotypic appearance might be related also to how glycine-receptor autoantibodies bind to specific target regions, as there is evidence that glycine-receptor 1 alpha antibodies bind in the spinal cord and brainstem of patients with a PERM phenotype, as Carvajal-González et al. (13). The memory impairment or visual dysfunction in patients with glycine-receptor antibodies might thus be related to how glycine-receptor antibodies bind to specific brain regions. The focal brain atrophy in the hippocampus in one patient might also be an early Alzheimer's disease correlate, although that is unlikely as his CSF Aß42 and CSF-based Aß42/Aß40 ratio were normal. Further studies with structural-functional analysis should be done to better clarify this issue. Note that our case series is limited by its low patient numbers, which make us unable to draw conclusions about the relevance of a potentially novel phenotype of glycine-receptor autoimmunity. Furthermore, no relationship between glycine-receptor autoimmunity, neurodegeneration, tauopathy, and cognitive impairment can be derived from this case series study due to its design.

Our case series demonstrate the occurrence of glycine receptor autoimmunity in patients with minor and major cognitive dysfunction as the leading symptom. Global cognitive function and verbal memory recall are often severely affected in these patients, while their visuoconstructive capacity remains practically unaffected. These phenotypic characteristics may help us further differentiate and select patients in memory clinics for certain diagnostics. Therapeutic approaches such as immunotherapy are classified as individual trial therapy according to proposed guidelines (11) if criteria such as axonal degeneration or brain atrophy or CSF inflammation are additionally present. None of our patients presented an obvious CNS inflammatory syndrome and were thus unlikely to be suffering from an acute inflammation. In addition, we detected no CSF glycine-receptor autoantibodies, nor any hint of intrathecal IgG synthesis. These facts weaken the hypothesis of causal involvement of glycine receptor-mediated autoimmunity in impaired memory recall. However, a chronic mild encephalitis might have contributed to the cognitive decline that is accompanied by a later axonal degeneration. More large cohort studies are needed to characterize the phenotype associated with glycine receptors and search for a relationship between glycine receptor antibodies and their phenotypic spectrum. Furthermore, the prevalence of glycine receptor-associated cognitive decline remains unknown, and the phenomenon is not understood. More large scale studies will help us to elucidate the frequency and significance of glycine-receptor associated cognitive impairment in memory clinic patients.

The data is available on demand from the corresponding author.

The studies involving human participants were reviewed and approved by Ethics Committee University Medical Center Göttingen, Von-Siebold-Str. 3, 37075 Göttingen, Germany. Written informed consent for participation was not required for this study in accordance with the national legislation and the institutional requirements.

NH wrote and conceptualized the manuscript. CB, DF, JW, and WS revised the manuscript for important intellectual content. All authors contributed to the article and approved the submitted version.

JW was supported by an Ilídio Pinho professorship, iBiMED (UIDB/04501/2020) at the University of Aveiro, Portugal.

Copyright © 2022 Hansen, Bartels, Stöcker, Wiltfang and Fitzner. This is an open-access article distributed under the terms of the Creative Commons Attribution License (CC BY). The use, distribution or reproduction in other forums is permitted, provided the original author(s) and the copyright owner(s) are credited and that the original publication in this journal is cited, in accordance with accepted academic practice. No use, distribution or reproduction is permitted which does not comply with these terms.