Methods: A total of 1,453 freshmen were recruited from a comprehensive university in Wuhan, China, and administered a self-report questionnaire. The APD subscale of Personality Diagnostic Questionnaire–Version 4 and Beck Depression Inventory were used to measure the presence of possible APD and depressive symptoms, respectively. The moderating effect of possible APD was examined by testing the statistical significance of the interaction between victimization and possible APD in multiple logistic regression analysis.

The transitioning from junior middle schools to universities is challenging for most university freshmen because of difficulties in adjusting to new surroundings, forming new self-identities, forging friendships, gaining independence, and overcoming academic pressure (1, 2). Accordingly, studies have shown the high risk of mental health problems in first-year university students, in particular depression; for example, as high as 35.4–41.4% of the Chinese university freshmen suffer from depressive symptoms (3, 4).

Bullying victimization refers to exposure to aggressive behavior repeatedly and over time from one or more perpetrators who have greater physical or social power than their victims (7). Convincing evidence has shown the causal association between being bullied and mental health problems in children and adolescents including anxiety, depression, non-suicidal self-injury, and suicidal behaviors (8). Although traditional bullying such as verbal and physical bullying is primarily recognized as a public health problem in primary and middle school students, bullying victimization is also prevalent among university students (9). For example, as high as 88.2% of the Chinese university freshmen experienced verbal bullying in the past 12 months and Chinese university students who are bullied are two times more likely than those who are not bullied to have depressive symptoms (9, 10).

Persons with APD avoid intimate and social contact with others, are sensitive to negative criticism and rejection, and have a high level of fear of being ridiculed by others (20). Findings from a comparative study have shown that compared to university students without APD, those with APD have significantly lower levels of self-esteem and, therefore, are more likely to experience negative affect (21).

This study was part of a large-scale survey, which investigated mental health, quality of life, and personality among fresh students of a comprehensive university in Wuhan, China, between November and December 2019. Eligible respondents were first-year undergraduates who were of Chinese nationality and voluntary to join the study. We randomly selected seven schools from a total of 19 schools of the university and invited all the freshmen to participate in the survey.

The Ethics Committee of Wuhan Mental Health Center approved the study protocol. All respondents signed the informed consent before the formal survey.

We used a standardized self-administered questionnaire to gather data on sociodemographics, lifestyle, experience of being bullied, and depressive symptoms.

Lifestyle factors included current drinking and current smoking. According to the official manual of the Chinese Adolescent Health-Related/Risk Behavior Surveillance, current drinkers and smokers were defined as individuals who consumed any alcoholic beverage and smoked at least once in the past month, respectively (28).

We used the APD subscale of the validated Chinese PDQ-4 to identify the possible presence of APD among respondents (32). The subscale has seven self-report questions and responses are in a true/false (1/0) format. According to previous studies (24, 33), a total score of four or higher was used to denote possible APD in Chinese university students.

Depressive symptoms were measured with the validated Chinese 21-item Beck Depression Inventory, the Second Edition (BDI-II), which is one of the most widely used scales for assessing the severity of depressive symptoms in both clinical and non-clinical populations in China, including university students (34–36). All BDI-II items use a 0–3 scale to rate the magnitude to which a persons has experienced each depressive symptom during the past 2 weeks. The total score ranges between zero and 63 with a cut-off score of 14 or more denoting the presence of depressive symptoms.

Altogether, 1,557 freshmen were invited and 1,453 completed the survey questionnaire (response rate: 93.3%). Among the completers, 868 (59.7%) were boys and the mean age was 20.3 years (standard deviation: 0.9, range: 16–26). The prevalence rates of bullying victimization, possible APD, and depressive symptoms were 39.2, 31.7, and 24.8%, respectively. Other detailed sociodemographic and lifestyle characteristics of the study sample are displayed in Table 1. 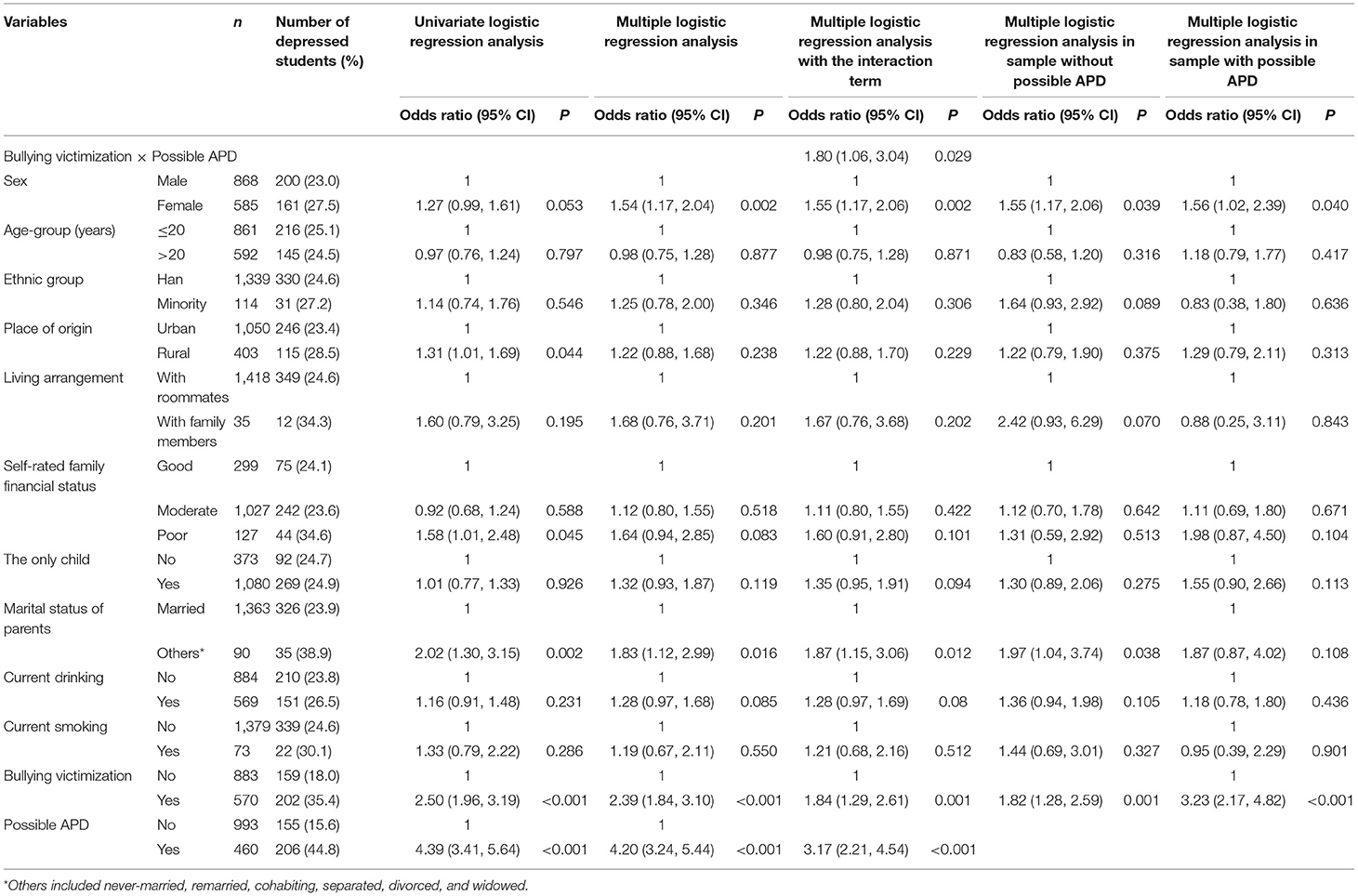 To the best of our knowledge, this is the first study in China that examined both the victimization-depression association and the moderating effect of possible APD on the victimization-depression association among university freshmen. Compared to the 8.0% 12-month prevalence of bullying victimization in college students in Changsha, China (9), we found a much higher 12-month prevalence of bullying victimization in university freshmen (39.2%). However, due to the heterogeneity in definitions and timeframes of depressive symptoms, prevalence rate of depressive symptoms in our study are lower than those reported in prior studies (24.8% vs. 35.4–41.4%) (3, 4). Nevertheless, the figure, nearly one-fourth of the freshmen were depressed, still indicates that depressive symptoms are a substantial mental health problem in Chinese university freshmen and there is an urgent need for developing intervention programs to prevent or reduce depression in this population.

In the sample of Chinese university freshmen, we observed significant and independent associations of depressive symptoms with bullying victimization and possible APD, which are consistent with findings from studies with middle school students and other populations (8, 26). The significant victimization-APD interactive effect on depression and greater victimization-depression association in freshmen with than those without possible APD suggest that possible APD magnifies the negative effect of bullying victimization on emotional health in university freshmen. Since the interactive effect was independent from sociodemographic and lifestyle factors, we speculated that some core features of APD may explain the moderating role of possible APD on victimization-depression association. First, social support can buffer the negative effect of a stressful event on the mental health of individuals (37). Because persons with APD avoid social contact with others and are more likely to have insufficient social support to cope with stressful situations, freshmen with possible APD would be more likely to be depressed if they were bullied. Second, persons with APD are overly concerned with “looking foolish” and tend to adopt avoidance coping strategies to deal with stressful situations, so bullied students are more likely to be stressed and depressed if they had possible APD.

This stud has two limitations. First, our assessment of bullying victimization did not include cyberbullying victimization, which is also prevalent and associated with depression in university students (38). So the current study can not examine the moderating effect of possible APD on association between cyberbullying victimization and depression. Second, the sample was selected from a comprehensive university in Wuhan, China, and fresh students from universities of other cities and other categories (i.e., medical) were not included, so there might be selection bias in the study sample. Third, some psychosocial factors associated with depressive symptoms such as social support and possible dependent personality were not measured and included in the adjustment analysis. Further studies are needed to exclude the confounding effects of these unmeasured psychosocial factors.

The studies involving human participants were reviewed and approved by Ethics Committee of Wuhan Mental Health Center. The patients/participants provided their written informed consent to participate in this study.

This work was supported by National Natural Science Foundation of China (Grant Number: 71774060). The funding source listed had no role in study design; in the collection, analysis, and interpretation of data; in the writing of the report; and in the decision to submit the paper for publication.

The authors thank all the research staff for their team collaboration work and all the students involved in this study for their cooperation and support.

Copyright © 2022 Xu, Pu, Li and Zhong. This is an open-access article distributed under the terms of the Creative Commons Attribution License (CC BY). The use, distribution or reproduction in other forums is permitted, provided the original author(s) and the copyright owner(s) are credited and that the original publication in this journal is cited, in accordance with accepted academic practice. No use, distribution or reproduction is permitted which does not comply with these terms.