The manner and content of praise influences the self-esteem and positive attitude of adolescents. Overly positive and inflated praise has been suggested to lower self-esteem in children (3). It was also suggested that person-focused but not process-focused praise leads children to avoid challenges in school (7). Furthermore, praise for behavior (process) was better than praise for personal qualities in terms of the effect on the self-esteem of children (2). Taken together, praise for behavior may be important in preventing depressive symptoms in adolescents, but it is still unknown which behaviors of children should be praised.

The purpose of this study was to test the hypothesis that being praised for prosocial behavior would be longitudinally associated with decreased depressive symptoms in adolescents. We adopted 10–24 years as the definition of the age of adolescence according to the recent review (10), thus called the study participants as early adolescents. This study used data from the Tokyo Teen Cohort study (TTC), a prospective population-based cohort study that is currently underway and aims to investigate the developmental trajectory of adolescents (11). Children born between September 2002 and August 2004 in three local governments in Tokyo (Setagaya, Mitaka, and Chofu) were randomly extracted using the Basic Resident Register. Of the 10,234 pairs of children and their primary caregivers who were asked to participate, 4,478 pairs agreed to cooperate in the baseline survey (the 1st wave of data collection) at the age of 10 years. An oversampling method was used with the goal of having 3,000 pairs remain in the 2nd wave survey (11). Given the low follow-up rate of low-income families, all 620 pairs whose annual household incomes was lower than five million yen were asked to participate in the 2nd wave survey. Of the remaining 3,858 pairs, 2,551 were randomly asked to participate in the 2nd wave. A total of 3,172 pairs were asked to participate in the longitudinal cohort study, resulting in 3,007 pairs participating in the second wave of data collection at the age of 12 years (follow-up rate was 94.8%).

Experience of Being Praised for Prosocial Behavior

The Short Mood and Feelings Questionnaire (SMFQ), a self-report questionnaire about depression (14, 15), was used to investigate the degree of depression in children in the 1st (10 years old) and 2nd (12 years old) waves of data collection. Each of the 13 items had three response choices: “True” (2 points), “Sometimes true” (1 point), and “Not true” (0 points). The scores for each item were summed into the total score (0–26 points), and higher total scores meant stronger depression.

For comparison of the demographic characteristics between the “prosocial praise group” and the “other praise group,” t-tests, tests of differences in population ratios, or χ2 tests were used. To investigate the relationship between being praised for prosocial behavior and depressive symptoms, linear regression analysis was performed using the SMFQ at the 2nd wave (12 years old) as the objective variable and being praised for prosocial behavior as the main explanatory variable. The variables which showed significant difference between the “prosocial praise group” and “other praise group” were treated as confounders. In addition, the SMFQ score at the 1st wave (10 years old) and other confounders were treated as covariates, and multiple regression analysis was performed after supplementing missing values using the multiple substitution method (number of multiple imputations: m = 200). Furthermore, since there is a gender difference in the development of prosocial behaviors in adolescence (18), we examined the interaction effect of sex and prosocial self-reports on depressive symptoms. An interaction term of sex X prosocial self-report was added in the multiple regression analysis. For statistical analyses, open-source statistical software R (version 3.6.1) and the multiple substitution method calculation package mice (version 3.6.0) were used. 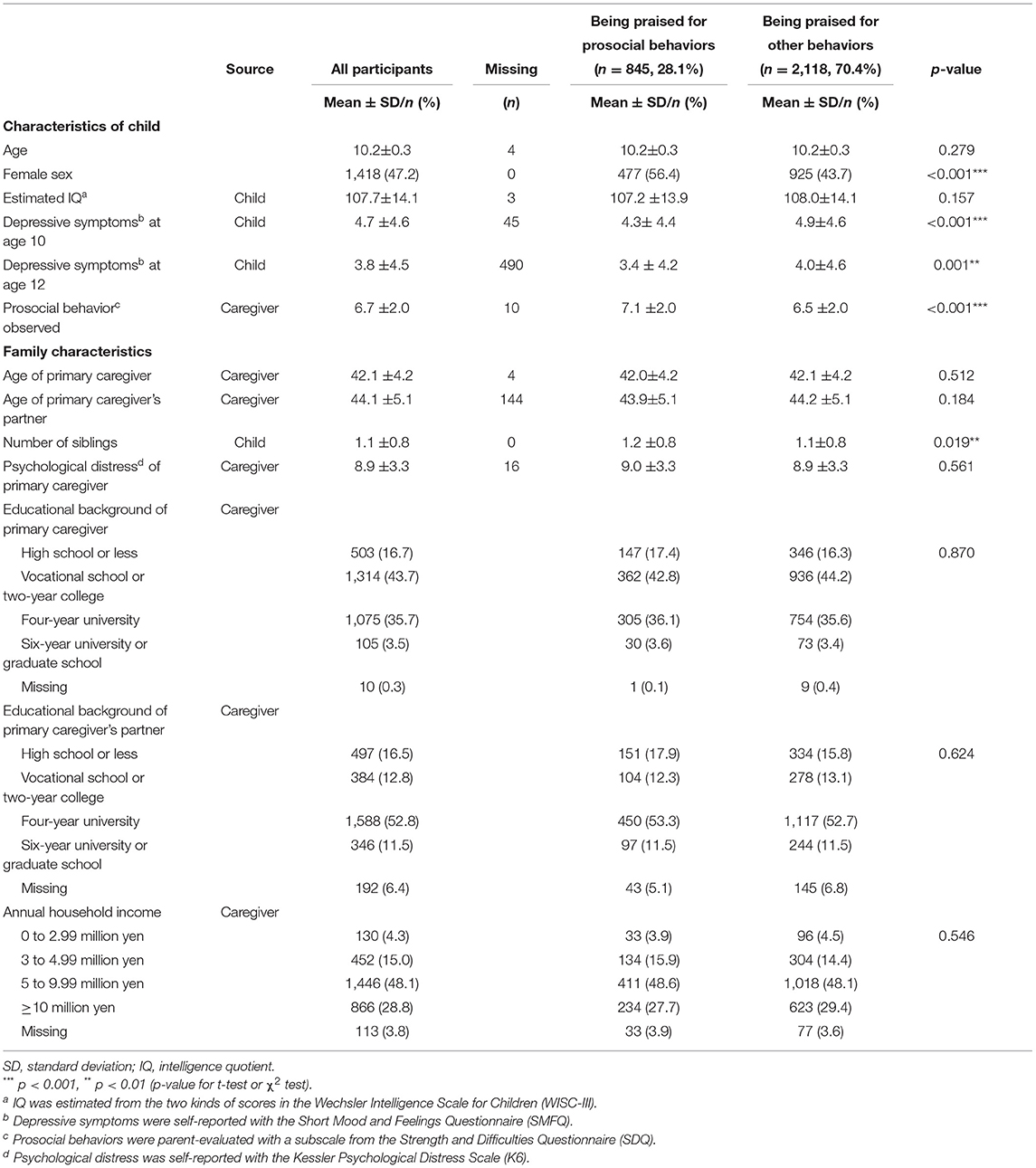 Table 2 shows the results of simple linear regression analysis and multiple linear regression analyses to investigate the longitudinal relationship between prosocial self-reports and depressive symptoms in children. In the single regression analysis, the children who reported being praised for prosocial behavior at age 10 had significantly lower depressive symptoms at age 12 [partial regression variable: −0.57, 95% confidence interval (CI): −0.96 to −0.17, p < 0.01]. In the multiple regression analysis, in addition to the child's age and sex, objective prosocial behavior, the estimated IQ and the number of siblings were added as confounders because they were significantly different between the prosocial praise group and the other praise group (Table 1). Caregivers' age and education, annual household income, and psychological distress of primary caregiver (K6 scores) were excluded from confounders because there were no significant differences between the prosocial praise and other praise groups. Statistical analysis was performed after missing values were complemented by multiple substitution. Even after adjusting for confounders, being praised for prosocial behaviors at 10 years of age was significantly associated with lower depressive symptoms at 12 years of age (partial regression variable: −0.44, 95% CI: −0.80 to −0.08, p < 0.05). There was no evidence for the interaction effect of sex and prosocial self-report on depressive symptoms (p = 0.22).

Table 2. The association between being praised for prosocial behaviors at age 10 and depressive symptoms at age 12.

There are several strengths of this study. First, this study revealed a longitudinal relationship between recognition of being praised for prosocial behavior and depressive symptoms with the 2 year follow-up period. Second, since this study used a large-scale (n = 3,007) general population sample of adolescents, a certain generalizability of the results would be assured. This is significant because it provides suggestions for intervention methods for adolescents, who are at high risk of developing depression. Third, the follow-up rate was very high (94.8%). Fourth, we conducted the analyses while including several confounders, such as depressive symptoms at baseline, estimated IQ, and number of siblings.

There are several limitations to this study related to the fact that we assessed praise for prosocial behavior by asking the children. First, we cannot determine whether the children were actually praised. There may be children who did not describe the experience of being praised for prosocial behaviors in the questionnaire but actually had an experience of being praised for such behaviors. However, on the other hand, we could assess the importance of children's recognition of being praised for their prosocial behavior in preventing depression, which would conversely be a strength of this study. Second, since the participants were 10 year-old children, a recall bias should be noted for their responses. Third, we could not investigate parenting styles or parental habit to praise which could be important factors in how children experience praise. Fourth, since the study participants were sampled only in Japan, the generalizability to other countries is questionable. Similar investigation in other countries is needed in the further research.

The studies involving human participants were reviewed and approved by Tokyo Metropolitan Institute of Medical Science (12–35), the University of Tokyo (10057), and SOKENDAI (Graduate University for Advanced Studies) (2012002). Written informed consent to participate in this study was provided by the participants' legal guardian/next of kin.

DN, NT, SA, MM, and TK designed the work. DN and NT conducted statistical analyses and wrote the draft of the manuscript. SA, KE, SY, AN, MH-H, and KK contributed to data acquisition. All authors reviewed the draft manuscript critically and approved the final version of the manuscript.

14. Angold A, Costello E, Messer S, Pickles A, Winder F, Silver D. Development of a short questionnaire for use in epidemiological studies of depression in children and adolescents: factor composition and structure across development. Int J Methods Psychiatr Res. (1995) 5:237–49. Available online at: https://psycnet.apa.org/record/1996-02633-002

Copyright © 2022 Nagaoka, Tomoshige, Ando, Morita, Kiyono, Kanata, Fujikawa, Endo, Yamasaki, Fukuda, Nishida, Hiraiwa-Hasegawa and Kasai. This is an open-access article distributed under the terms of the Creative Commons Attribution License (CC BY). The use, distribution or reproduction in other forums is permitted, provided the original author(s) and the copyright owner(s) are credited and that the original publication in this journal is cited, in accordance with accepted academic practice. No use, distribution or reproduction is permitted which does not comply with these terms.