Infrared optical measurement has a wide range of applications in industry and science, but infrared light detectors suffer from high costs and inferior performance than visible light detectors. Four-wave mixing (FWM) process allows detection in the infrared range by detecting correlated visible light. We experimentally investigate the stimulated FWM process in a hot 85Rb atomic vapor cell, in which a weak infrared signal laser at 1,530 nm induces the FWM process and is amplified and converted into a strong FWM light at 780 nm, the latter can be detected more easily. We find the optimized single- and two-photon detunings by studying the dependence of the frequency of input laser on the generated FWM light. What’s more, the power gain increases rapidly as the signal intensity decreases, which is consistent with our theoretical analysis. As a result, the power gain can reach up to 500 at a signal laser power of 0.1 μW and the number of detected photons increased by a factor of 250. Finally, we experimentally prove that our amplification process can work in a broad band in the frequency domain by exploring the response rate of our stimulated FWM process.

In this paper, we report on an experimental exploration of the stimulated FWM process in a diamond-type 85Rb atomic ensemble. Realizing the amplified detection of the infrared laser by converting the weak infrared signal light into the strong visible FWM light. In this work, the atoms are excited and populated in the upper state by inputting two strong pump lasers and we make an infrared beam as a seed light to induce atoms to efficiently generate the FWM light. Specifically, we find that we can achieve the purpose of amplifying and detecting the infrared signal by detecting the strong visible FWM signal which is induced by this infrared signal. In addition, in order to investigate the response properties of the amplifier, we compare the waveforms between the input signal and the output signal for various rising edge cases.

We experimentally realized the amplified detection of infrared signal through a stimulated FWM process in hot 85Rb atomic vapor with a four-levels diamond configuration as shown in Figure 1A. It consists of one ground state |1⟩ (5S1/2(F = 2)), one excited state |4⟩ (4D3/2(F′′ = 3)), and two intermediate states |2⟩ and |3⟩ (5P1/2(F′ = 2) and 5P3/2(F′ = 3)). The pump1 (795 nm) and pump2 (1,475 nm) lasers excite the atoms from |1⟩ to |2⟩ and |2⟩ to |4⟩ respectively, then the atoms decay into the ground state |1⟩ through the intermediate state |3⟩. Since the difference between the spontaneous decay rates (Γ43) from |4⟩ to |3⟩ and the spontaneous decay rates (Γ31) from |3⟩ to |1⟩ satisfies the relation Γ43 = 0.1Γ31, the populations of |4⟩ and |3⟩ are not significantly inversed and the FWM process cannot occur obviously in the absence of the signal laser (Zhang et al., 2020b). So that we input the signal (1,530 nm) laser which interacts with the |3⟩ − |4⟩ transition to induce the FWM, and the FWM (780 nm) light can be generated strongly in the transition from |3⟩ to |1⟩ under the phase-matching condition of wave-vector conservation and energy conservation. Through this stimulated FWM process, a weak signal laser can be converted into a strong FWM light to achieve the amplification of the infrared signal laser. The detuning frequencies of the pump1, pump2, and signal lasers correspond to Δ1, Δ2 and Δ3 respectively.

The experimental setup is schematically depicted in Figure 1B, where pump 1, pump2 and signal lasers are continuous waves (CW) and overlap in a 5-cm-long 85Rb cell that is heated to 140°C. The horizontally polarized pump2 beam and vertically polarized signal beam are focused into the center of the cell with the same diameter of 126 μm. The vertically polarized pump1 beam is superimposed with the pump2 beam and the signal beam through a dichromatic mirror (DM1), and has a diameter of 141 μm in the focal spot. The strong pump2 laser and signal laser are filtered out by the DM2, and the pump1 laser is blocked by a subsequent interference filter (IF). A photomultiplier tube (PMT) with an adjustable attenuation collects the generated FWM light in the direction which is colinear with the pump1 laser in our system. 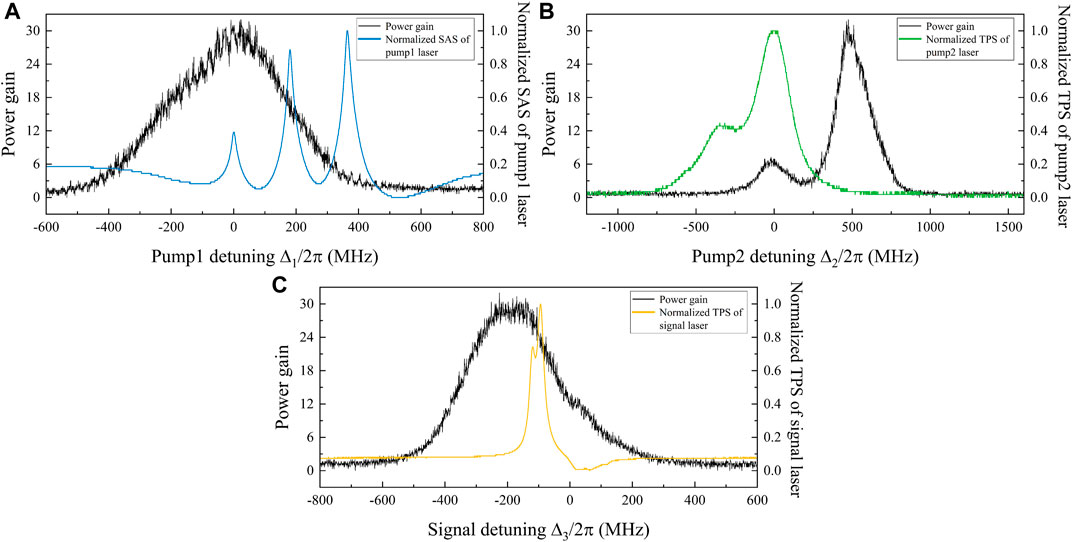 In Figure 3, we plot the power gain as a function of the signal power Is under the optimal experimental conditions we mentioned above, and the power is measured with a power meter instead of the PMT. Due to the strong pump1 and pump2 lasers, the atoms are mostly populated at the state |4⟩ via two-photon excitation. Meanwhile, the weak signal laser is converted and amplified into a strong FWM light. We can fetch the information from Figure 3 that the power gain increases rapidly with the decrease of the signal power. Figure 3A indicates that the power gain exceeds 100 when the power of the signal laser is less than 2 μW, and the power gain can be reached up to 500 in the case of Is = 0.1 μW. The amplification effect exhibits a tendency to saturation when the signal power intensity is beyond 1 mW, which is illustrated in Figure 3B. We also can defined the photon-number gain (or detection gain) Gphoton in this amplification process as the ratio of the number of output visible photons to the number of input infrared photons. Considering that the energy of a photon is inversely proportional to its wavelength, we can obtain the relationship Gphoton = 0.5G between photon-number gain and power gain. Similarly, the photon-number gain can reach 250 at the case of Is = 0.1 μW according to Figure 3B, which means that the number of photons detected by a detector is increased from 1 to 250. 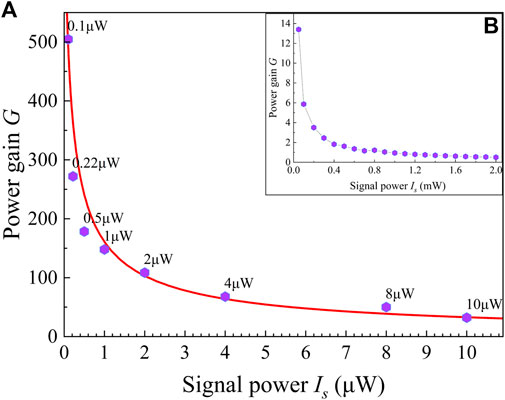 To explain the amplification of signal laser in the stimulated FWM process, we theoretically calculate the relation between power gain and signal power in an atomic diamond-type energy-level system. The equation of motion can be described as (Boyd, 2003).

where ρij is the density-matrix element and Hij is the effective interaction Hamiltonian. The subscript indices i and j indicate the |i⟩ and |j⟩ states respectively. Γij denotes the population spontaneous relaxation rate from state |i⟩ to state |j⟩ while γij = (Γii + Γjj)/2 denotes the relaxation rates of the coherences. For 85Rb, the spontaneous decay rates are Γ33 = 6 × 2π MHz, Γ22 = Γ33, Γ44 = 0.35Γ33, Γ43 = 0.1Γ33, and Γ42 = 0.25Γ33. The matrix of the effective interaction Hamiltonian can be represented as

The amplitude of the FWM light wave EFWM is proportional to the third-order optical polarization (Parniak and Wasilewski, 2015):

where N is the number density of atoms and is the transition dipole moment between states |1⟩ and |3⟩. In our system, the third-order optical polarization can be represented as , where χ(3) denotes the third-order susceptibility; ϵ0 is the vacuum permittivity; Ep1, Ep2 and Es are amplitudes of the pump1, pump2 and the signal electric fields, respectively. We can obtain the power conversion efficiency between signal light and FWM light by calculating χ(3).

Considering the stimulated amplified process of signal light, we treat the state |3⟩ and the state |4⟩ equivalents as a simple two-level atomic system for the signal field. The stimulated emission from the interaction between this two-level atomic system and signal field can enhance the input signal light with a gain factor of Gfactor = Isout/Is (Isout is the power of the amplified signal light), and Gfactor is satisfied by the following equation which is described in references (Riehle, 2004; Pan et al., 2018):

with and , where ωs is the waist of signal light, ν is the frequency of the signal light at 1530nm, L is the length of the 85Rb vapor cell, Isat = πhcΓ43/(3λ3) is the saturation intensity, and α = 1/τcyc represents the pumping rate with being the atomic cycling time (Zhang et al., 2013). We obtain the power gain

by considering that the stimulated FWM process consists of an amplification process and a frequency conversion process, where η is a constant and Gfactor is a function of Is. We then fit our experimental data with the deduced function and the result is shown in Figure 3A. The theoretical analysis agrees with our experimental results.

Finally, for amplified detection of an infrared signal, we should also pay attention to the response rate in this conversion process. As illustrated in Figure 4, we replace the CW signal laser with a pulsed signal laser. Figures 4A–D compare the signal pulse with the generated FWM pulse at a rising time of 1 μs, 500 ns, 100 ns and 60 ns, respectively. It can be concluded that the rising time of the input signal light and output FWM light are almost identical and the response time of this conversion process is faster than 60 ns. The study of higher response rate is mainly restricted by the shortest achievable rising time of the acoustic optical modulator (AOM) in our setup, which is 55 ns. 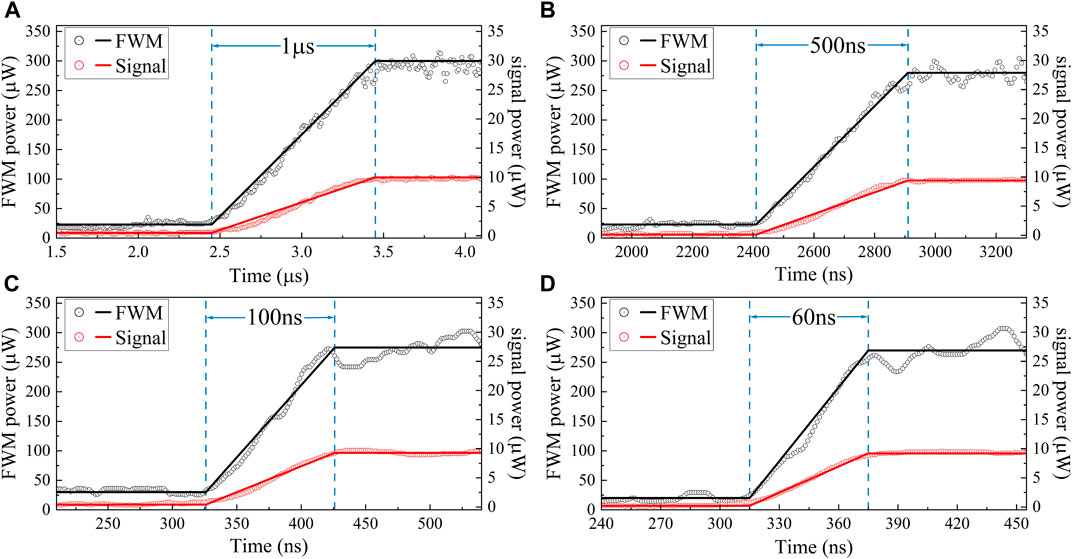 In conclusion, we have demonstrated the amplified detection of an infrared signal via a stimulated FWM process based on an atomic diamond-type configuration. What’s more, the generated FWM light is in the visible range, which can be detected more efficiently. We find that the power gain increases sharply as the power of the signal laser decreases, and the experimental data is in good agreement with our theoretical fitting. We also investigate the dependence of power gain on the detunings of the three input lasers. Simultaneously, we experimentally confirm that the response rate of the FWM process is faster than 60 ns, therefore it can be applied to the detection of the weak infrared signals in specific situations.

D-SD and B-SS coordianted the research project. W-HZ peformed the experimental fabrication, measurments and analyzed the data. All authors discussed the manuscript.

Copyright © 2022 Zhang, Peng, Li, Ye, Zeng, Dong, Ding and Shi. This is an open-access article distributed under the terms of the Creative Commons Attribution License (CC BY). The use, distribution or reproduction in other forums is permitted, provided the original author(s) and the copyright owner(s) are credited and that the original publication in this journal is cited, in accordance with accepted academic practice. No use, distribution or reproduction is permitted which does not comply with these terms.