As time goes by, discoveries become common knowledge, and often the person who first changed a paradigm gets forgotten. One such case is the discovery that the Sun's corona is a million degrees hot—much hotter than its surface. While we still work on solving how the Sun heats the corona, the name of the discoverer seems to be forgotten. Instead, other people get the credit who contributed important pieces to the puzzle, but the person who solved this puzzle was someone else. In this historical note we show that this credit should go to Hannes Alfvén (cf. Figure 1).

The Sun with its temperature of 6000 K at the surface originally was not expected to support an extended hot outer solar atmosphere that produces ultraviolet (UV) light and X-rays—thermodynamics requires heat to flow from the hot to the cold, not vice versa. The first clues to the hot solar atmosphere emerged from the 1869 eclipse observation of the 530.3 nm green coronal line by Young and Harkness. Hulburt (1938) concluded that “ultraviolet light, X-rays or particles of zero average charge” must be responsible for the E-layer of the Earth's ionosphere. Actually, the discovery of the ultraviolet Sun dates back to 1801 with Ritter's observation of the decomposition of silver chloride on the short-wavelength side of the Sun's visible spectrum. While Hulburt's theory was highly speculative, it had the support of the work by Grotrian (1931) who drew attention to the smearing of the Fraunhofer lines due to scattering by free electrons in the corona. However, these researchers did not assume or conclude that the corona is hot. 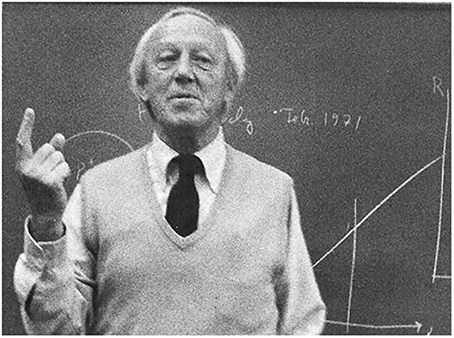 In the late 1940's it was well accepted that the corona is hot, to the point that first models trying to explain the heating of the corona, e.g., by Schwarzschild (1948), did not even bother to point to the discovery paper of the hot corona. At this point, the study of the UV and X-rays of the Sun became obviously worthwhile. The ultraviolet emission from the hot corona was first detected on 10 October 1946 with instruments built by Tousey and his colleagues at the U.S. Naval Research Laboratory using captured German military V2 rockets (Baum et al., 1946). Soon thereafter, the X-ray Sun was discovered by Burnight (1949) using a pinhole camera on-board a rocket. Since then, there has been a tremendous progress in the ultraviolet and X-ray observations (cf., Figures 2A,B) from the Sun and underlying physical processes in the solar atmosphere.

Reviews, textbooks and research papers from the last half century cite Grotrian (1939) or Edlén (1943) when it comes to a reference to the discovery that the corona is hot. Both identified emission lines in the corona as forbidden lines of highly ionized species, e.g., the “red line” at 637.4 nm from nine times ionized iron, Fe X. While Grotrian did not speak of high temperatures, but only non-equilibrium effects, Edlén estimated the temperature of the upper solar atmosphere to be about 250,000 K. In contrast to common belief Edlén did not use the high degree of ionization, but the intensity of the red line as an argument—a much weaker argument strongly depending on assumptions for the density of the corona. More importantly, in Edlén's paper the high temperature is only a side remark, so that it is clear that he was not fully aware of the implications. In summary, the two papers by Grotrian (1939) or Edlén (1943) would not be the best choice for pointing to the discovery of the hot corona—and maybe they are still cited because both papers are written in German, and thus not easily available to the majority of astronomers.

Instead, the credit for discovering that the corona is hot should go to Hannes Alfvén. After the paper by Grotrian but still before Edlén, he published a manuscript in 1941 in the Arkiv för Matematik, Astronomi och Fysik, a Swedish journal (Alfvén, 1941). He concluded that the Sun's corona is “heated to an extremely high temperature” (Alfvén, 1941). He summarized six arguments that support that the corona is hot, only that previous authors did not dare to draw that conclusion—probably the thermodynamic argument that heat cannot be transported from a cool to a hot body prevented previous scientists from that conclusion. In a quantitative analysis, he showed that the total energy to maintain the corona is only about 10−5 of the Sun's radiated energy, so that losses of the (optically thin) corona are negligible. It was his prophetic contribution that apart from the Sun's gravitation, its magnetic field interacting with charged particles plays a crucial role, overcoming the limitations due to pure thermodynamics.

While several textbooks (Waldmeier, 1955; Billings, 1966) in the 1950's and 1960's still cited Alfvén's paper (Alfvén, 1941), it seems that the only research papers referring to his work are by Edlén (1943) and by Woolley and Gascoigne (1946)—in the latter paper only as a note added in proof. However, this epoch-making discovery of the hot corona by Alfvén did not find a place in subsequent citations. It is, therefore, only appropriate that history be corrected with proper credit to Alfvén for this discovery. In particular, because Alfvén (1942) proposed that waves can propagate through a magnetized plasma under similar conditions as in the Sun's atmosphere. After over seven decades of this Nobel-prize winning discovery, scientists are still investigating to what extent these waves are capable of heating the solar corona to the high temperature, first explicitly argued for by Alfvén himself.

Waldmeier, M. (1955). Ergebnisse und Probleme der Sonnenforschung, 2nd Edn. Leipzig: Akademische Verlagsgesellschaft. In the 1st edition from 1941, there is no reference to Alfvén's discovery or to a hot corona.

Copyright © 2014 Peter and Dwivedi. This is an open-access article distributed under the terms of the Creative Commons Attribution License (CC BY). The use, distribution or reproduction in other forums is permitted, provided the original author(s) or licensor are credited and that the original publication in this journal is cited, in accordance with accepted academic practice. No use, distribution or reproduction is permitted which does not comply with these terms.