We present the analysis of near-infrared Hubble Space Telescope imaging of 10 Fanaroff Riley II powerful radio galaxies at low redshift (0.03 < z < 0.11) optically classified as narrow-line radio galaxies. The photometric properties of the host galaxy are measured using GALFIT, and compared with those from the literature. Our high resolution near-infrared observations provide new and direct information on the central kpc-scale dust lanes in our sample that could be connected to the pc-scale torus structure. Moreover, analyzing the infrared spectrograph Spitzer spectra of our sample, we suggest properties of the dust size of the torus.

Under the context of the unified schemes for active galactic nuclei (AGN, Barthel, 1989; Urry and Padovani, 1995), the pc-scale torus structure is perpendicular to the radio jet axis. Simplifying, measuring the offset in position angle between the torus and the radio axis close to the nuclei would be a direct test of the unified schemes of powerful radio galaxies. Near-infrared (near-IR) observations can give us direct information about the kpc-scale region of the AGN, close to the pc-scale torus, because such wavelengths suffer less extinction than optical wavelengths.

Besides, various studies suggest that AGN have a lower dust-to-gas ratio than the Galactic standard value: AV/NH = 5.3 × 10−22 mag cm−2 (Bohlin et al., 1978; Maccacaro et al., 1982; Reichert et al., 1985; Maiolino et al., 2001). This result is interpreted as the circumnuclear region of the AGN is composed of large grains, because the small grains, responsible for absorbing the most of the optical radiation, are depleted or become large grains by a coagulation process.

In this work we present the analysis of near-IR images to investigate the connection between the pc-scale torus structure and the kpc-scale dust lane. This can potentially help us to inquire into the unified schemes. Also, we used archived infrared spectrograph (IRS) Spitzer data of our sample, to shed light on the extinction imposed by the dust structures and on the dust characteristics of the torus.

The sample is composed of all 10 FRII powerful radio galaxies classified as narrow-line radio galaxies at redshift 0.03 < z < 0.11 from the 3CRR catalog (Laing et al., 1983, see Table 1). These objects are ideal sources for a critical analysis of the orientation-based unified model and for investigating the torus properties, because their radio jets are close to the plane of the sky, and, according to the unified scheme, for these sources we have no direct view to the AGN. 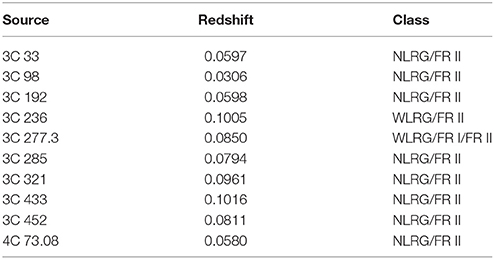 The images were obtained with the Hubble Space Telescope (HST) Near Infrared Camera and Multi-Object Spectrometer (NICMOS) at 1.025 and 2.05 μm with NICMOS 2 (F110W and POL-L filters, respectively), and at 1.45 and 1.70 μm with NICMOS 1 (F145M and F170M filters, respectively. Program ID: 10410, PI: C. N. Tadhunter). The low redshift of the sample and the high resolution and stability of the near-IR observations obtained with the HST allows us to have access to the inner region of the AGN and to trace the dust geometry in the AGN inner region without precedent.

We also made use of Spitzer spectroscopic data of our sample taken with the IRS instrument. The Spitzer data were obtained from the Spitzer Science Centre's archive. We use the IRS spectra to measure the optical depth of the silicate feature.

We fitted the near-IR galaxy profile of our sample with a Sérsic plus a point spread function (PSF) and an Exponential components using GALFIT (Peng et al., 2002). The Sérsic component takes into account the light of the underlying host galaxy, the PSF considers the unresolved quasar, and the Exponential component characterizes a possible disc component. The PSF was included only for those galaxies showing an unresolved source reported in Ramírez et al. (2014). We find preference of the host galaxies to prefer a Sérsic+Exponential components over a single Sérsic component, indicating that the host galaxies tend to be E-like galaxies with a disk component. However, the values of the χ2 given by the two models (two components and single component) are close each other (Δ < 0.25) to give a conclusive statement. We apply a F-test to test the null hypothesis that the two components and the single component models yields the same good quality fit. We find that we cannot reject this null hypothesis at a 35% level of significance. 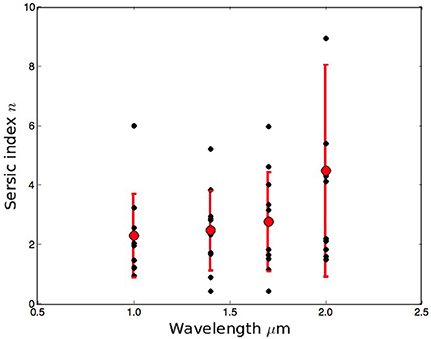 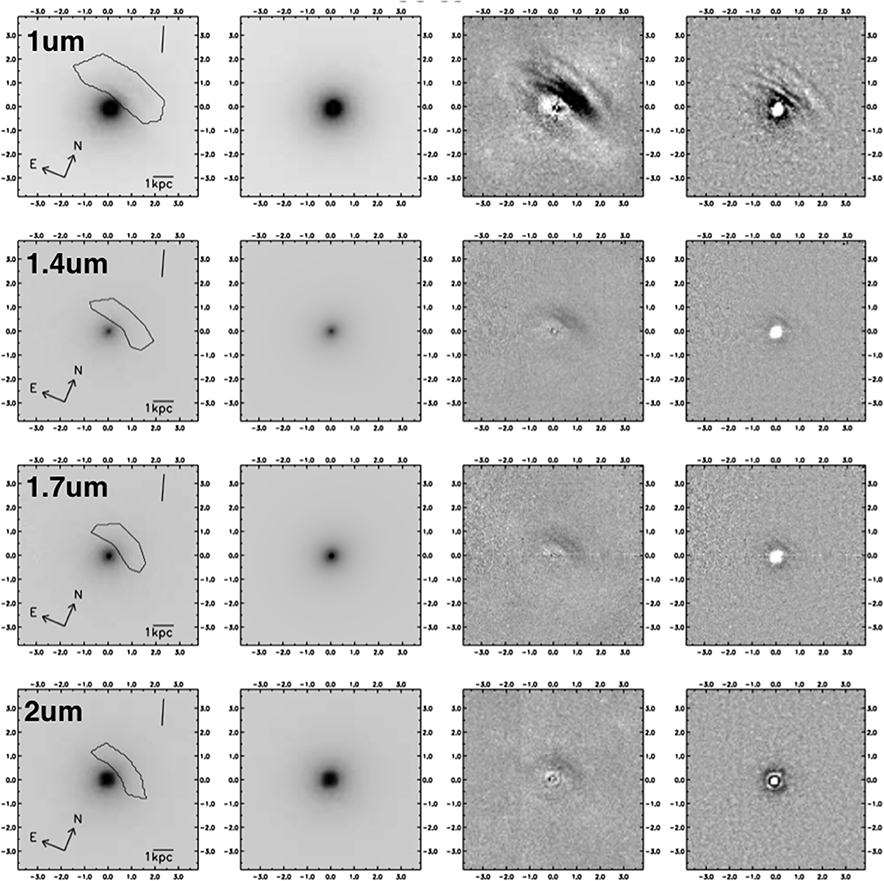 Figure 2. HST residuals after galaxy model subtraction: the case 3C 33. From top to bottom row: 1.0, 1.4, 1.7, and 2.0μm. Field of 7.6 × 7.6 acsec size. The line in the upper-right corner represent the orientation of the inner radio jet. Contours represent a masked region where traces of dust lane are detected—excluded for the fit. The images are shown in gray linear scale.

We have included to our analysis the PA offset between the dust lane and the radio jet axis of the 8 galaxies reported in Madrid et al. (2006) with same redshift and kpc-scale to our sample (i.e., those with z < 0.1 and 2.5 kpc-scale dust). There is a tendency of the dust lanes to be perpendicular to the radio axis, as can be seen in the Figure 3. The 7/14 of the sample is perpendicular within ±20°. Note, however, that the uncertainties in the offsets (~5°) give a distribution peaking at bin 60−70°, which is within the general half-opening angle considered in the torus models (30−40°; e.g., Hönig and Kishimoto, 2017). 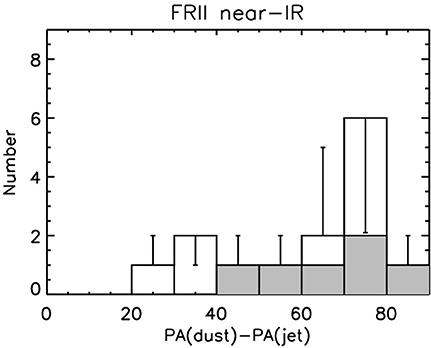 Figure 3. The distribution of the offsets between the radio jet and the ~2 kpc-scale dust features of our sample (filled bars), and from the literature (open bars; Madrid et al., 2006).

In Ramírez et al. (2014), we measured the optical extinction toward the AGN by different techniques, one of such techniques was by measuring the optical depth of the silicate feature, τ9.7, considering a Gaussian plus a continuum.

It is interesting that two objects: 3C 98 and 3C 192, that have no silicate detections also have no evidence for large scale dust lanes. As silicate absorption requires significant column densities, it is possible that the large scale dust lanes contributes to the silicate extinction where otherwise the strong AGN continuum dominates, resulting in the objects without clear dust lane detections having none or low silicate absorption depths.

However, the optical extinction of 3C 98 and 3C 192 derived from de-reddening their near-IR SED spectral index and from the X-ray luminosity is high (AV ~30 − 50 Ramírez et al., 2014). This can be explained by the presence of big grains in the torus. Big grains can extinguish the optical wavelengths and not produce silicate absorption line (Lyu et al., 2014). Unfortunately, the other two sources with no dust lane detection (3C 277.3 and 4C 73.08) have no IRS Spitzer data. Mid-IR spectroscopic observations would give essential information to clarify this issue.

Moreover, we have plotted our sample on the diagram of Maiolino et al. (2001, his figure 1), and we find that our sample follows the same trend found by Maiolino et al. (2001): that radio-quiet AGN have lower dust-to-gas ratios than the standard dust-to-gas ratio of the Galaxy. Therefore, the interpretation that Maiolino et al. (2001) gave to their results—that the circumnuclear region of the AGN is composed of large grains—can also be valid for radio-loud AGN sources. Also, it has been found that AGN have ratios AV/τ9.7 ~ 5.5 lower than in the interstellar Galaxy medium (= 18; Shao et al., 2017), suggesting that the torus is composed of dust grains bigger than those in the interstellar medium of the Milky Way.

Assuming that the torus is perpendicular to the radio jet axis, our result suggests a continuity between the dust in the pc-scale torus and the more extended kpc-scale dust lanes. The misalignment of the rest can be explained as a warping disks.

• The near-IR images of 3C 98 and 3C 192 show no traces of a kpc-scale dust lane and their IRS Spitzer spectrum shows no silicate absorption line. This suggests that the torus is composed of big grains that extinguish the quasar optical light, but do not extinguishes the silicate line.

ER analyzed the near-infrared HST images, produced the plots and the manuscript. ER and IA performed the galaxy fitting profile. All the co-authors contributed with the analysis and interpretation of the results.

ER acknowledges the financial support from the Mexican Council of Science and Technology (CONACyT). We would like to thank the referees for the constructive comments.

Copyright © 2017 Ramírez, Aretxaga, Tadhunter, Lopez-Rodriguez and Packham. This is an open-access article distributed under the terms of the Creative Commons Attribution License (CC BY). The use, distribution or reproduction in other forums is permitted, provided the original author(s) or licensor are credited and that the original publication in this journal is cited, in accordance with accepted academic practice. No use, distribution or reproduction is permitted which does not comply with these terms.