Interaction between the dietary fiber and the gut microbes can regulate host bile acid metabolism. This study sought to explore the effects of guar gum combined with pregelatinized waxy maize starch (GCW) in a gestation diet on reproductive performance, gut microbiota composition, and bile acid homeostasis of sows. A total of 61 large white sows were randomly grouped into the control (n = 33) and 2% GCW (n = 28) groups during gestation. GCW diet increased birth-weight of piglets, and decreased the percentage of intrauterine growth restriction (IUGR) piglets. In addition, dietary GCW reduced gut microbial diversity and modulated gut microbial composition in sows on day 109 of gestation. The relative abundance of bile salt hydrolase (BSH) gene-encoding bacteria, Lactobacillus and Bacteroides decreased after GCW administration, whereas no significant difference was observed in the fecal level of total glycine-conjugated and taurine-conjugated bile acids between the two groups. Dietary GCW increased the relative abundance of Ruminococcaceae (one of few taxa comprising 7α-dehydroxylating bacteria), which was associated with elevated fecal deoxycholic acid (DCA) in the GCW group. GCW administration lowered the concentrations of plasma total bile acid (TBA) and 7α-hydroxy-4-cholesten-3-one (C4) (reflecting lower hepatic bile acid synthesis) at day 90 and day 109 of gestation compared with the control diet. Furthermore, the levels of plasma glycoursodeoxycholic acid (GUDCA), tauroursodeoxycholic acid (TUDCA) and glycohyocholic acid (GHCA) were lower in the GCW group compared with the control group. Spearman correlation analysis showed alterations in the composition of the gut microbiota by GCW treatment was associated with improved bile acid homeostasis and reproductive performance of sows. In conclusion, GCW-induced improves bile acid homeostasis during gestation which may enhance reproductive performance of sows.

This study explored the impacts of dietary GCW intake on reproductive performance and gut microbiota composition and bile acid homeostasis of sows during gestation. The hypothesis of the study was that dietary GCW intake in gestation perturbs the gut microbiota accompanied with changes in bile acid composition in feces, and in turn induces intestinal FXR signaling, which may reduce TBA levels in plasma.

Animal use and care protocol used in this study was approved by Institutional Animal Care and Use Committee of Huazhong Agricultural University. The ethical approval number of this study is HZAUSW-2016-023.

GCW used in this experiment was obtained by mixing 85.7% pregelatinized waxy maize starch (Hangzhou, China) with 14.3% guar gum (Yunzhou, China). A total of 61 multiparous sows (large white, parity 2–6) were randomly grouped into two dietary treatments using a complete block design. During gestation, sows were fed with corresponding experimental diets: the control group was fed with basal diet (control, n = 33) whereas the GCW group was fed with basal diet supplemented with 2% GCW to replace rice bran meal (GCW, n = 28). All experimental diets were formulated to meet nutrient requirements of gestating sows according to recommendations by NRC (20). Treatments were isonitrogenous and isoenergetic diets. Diet compositions and nutrient levels are presented in Supplementary Table 1. Animals were fed twice a day (07:00 and 14:30 h). Blood samples (6~8 mL) were collected from the marginal ear vein of sow with disposable vacuum blood collection tubes 4 h after the morning meal (7~10 sows per group) on days 30, 60, 90, 109 of gestation (G30, G60, G90, and G109). Plasma was extracted by centrifugation of blood samples at 3,000 × g for 5 min at 4°C and stored at −80°C until analysis. Fresh feces were collected on day 109 of gestation and stored in a −80°C freezer. All sows did not present any signs of disease before sampling.

Measurement of Plasma FGF19 and C4

Quantification of Baij, Bsh1, and Bsh2 Gene by Real-Time PCR

All bile acid standards were purchased from Olchemim Ltd. (Olomouc, Czech Republic) and Sigma (St. Louis, MO, USA). For plasma samples, 200 μL methanol was added to 50 μL plasma-spiked with 10 μL internal standard (IS), vortexed, and centrifuged at 12,000 r/min for 10 min. For feces samples, 20 mg of feces were spiked with 10 μL IS and mixed with 200 μL methanol, vortexed, and centrifuged at 12,000 r/min for 10 min. The supernatant were evaporated to dryness, reconstituted in 100 μL 50% aqueous methanol (V/V) for further LC-MS analysis.

Effects of GCW in the gestation diet on reproductive performance of sows are presented in Table 1. GCW showed no significant effect on total number of born piglets and number of alive piglets. GCW significantly increased birth weight of piglets compared with the weight of piglets in the control group. Moreover, the percentage of IUGR piglets (< 800 g) in the total alive piglets for the GCW group was 0.91%, which was significantly lower compared with that of the control group (3.89%). However, no significant differences were observed for the number of piglets with birth weights ranging between 800–1,000, 1,000–1,200, 1,200–1,400, and more than 1,400 g between the two groups. 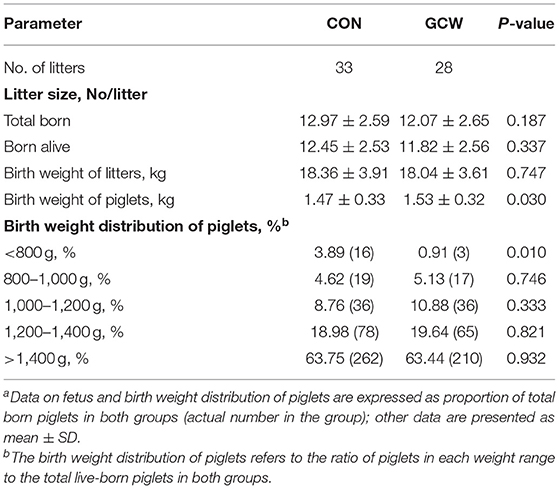 Table 1. Effects of dietary supplementation with GCW during gestation on reproductive performance of sowsa.

To explore the composition of gut microbiota for the two groups on day 109 of gestation, 16S ribosomal RNA gene (V3-V4 gene regions) sequencing was conducted. Analysis of Alpha-diversity indexes showed that the number of observed species, Chao1, Shannon, and Simpson index were significantly lower in the GCW group compared with the control group (Figures 1A–D). Nonmetric multidimensional scaling (NMDS) analysis for beta density showed that the control group was separately clustered from the GCW group (Figure 1E). Hierarchical Cluster Analysis (HCA) based on the weighted-UniFrac distance showed that control samples clustered together whereas GCW samples clustered together (Figure 1F). This finding validated the results obtained by NMDS analysis. 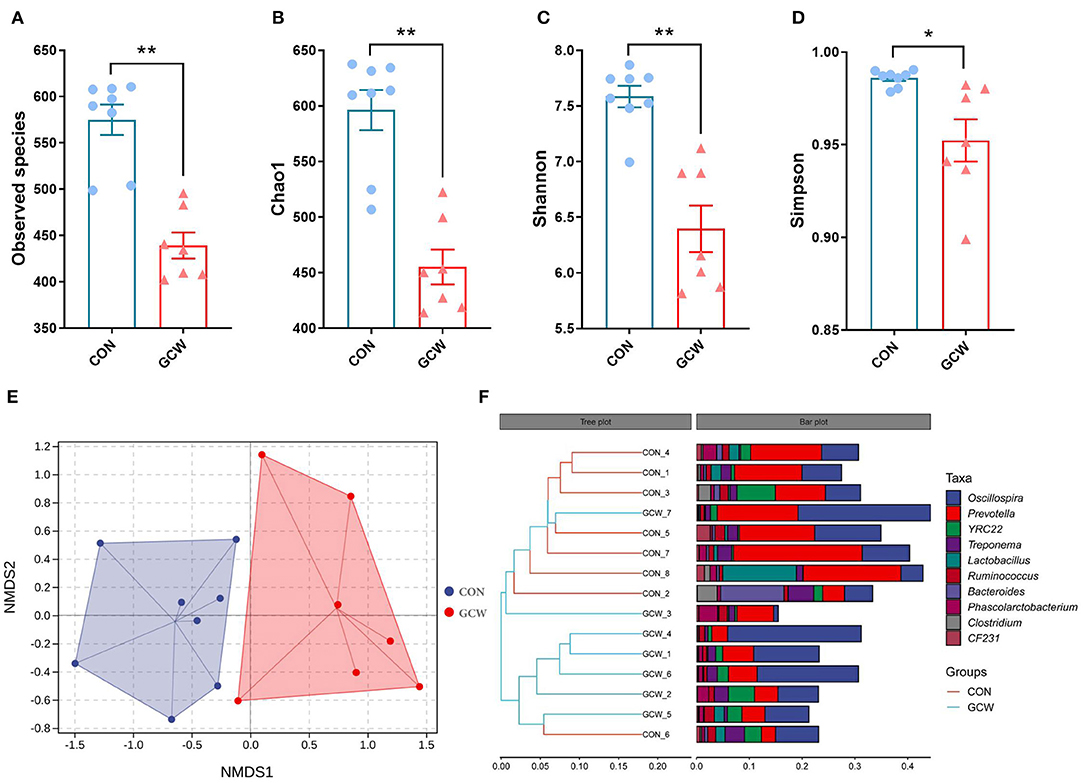 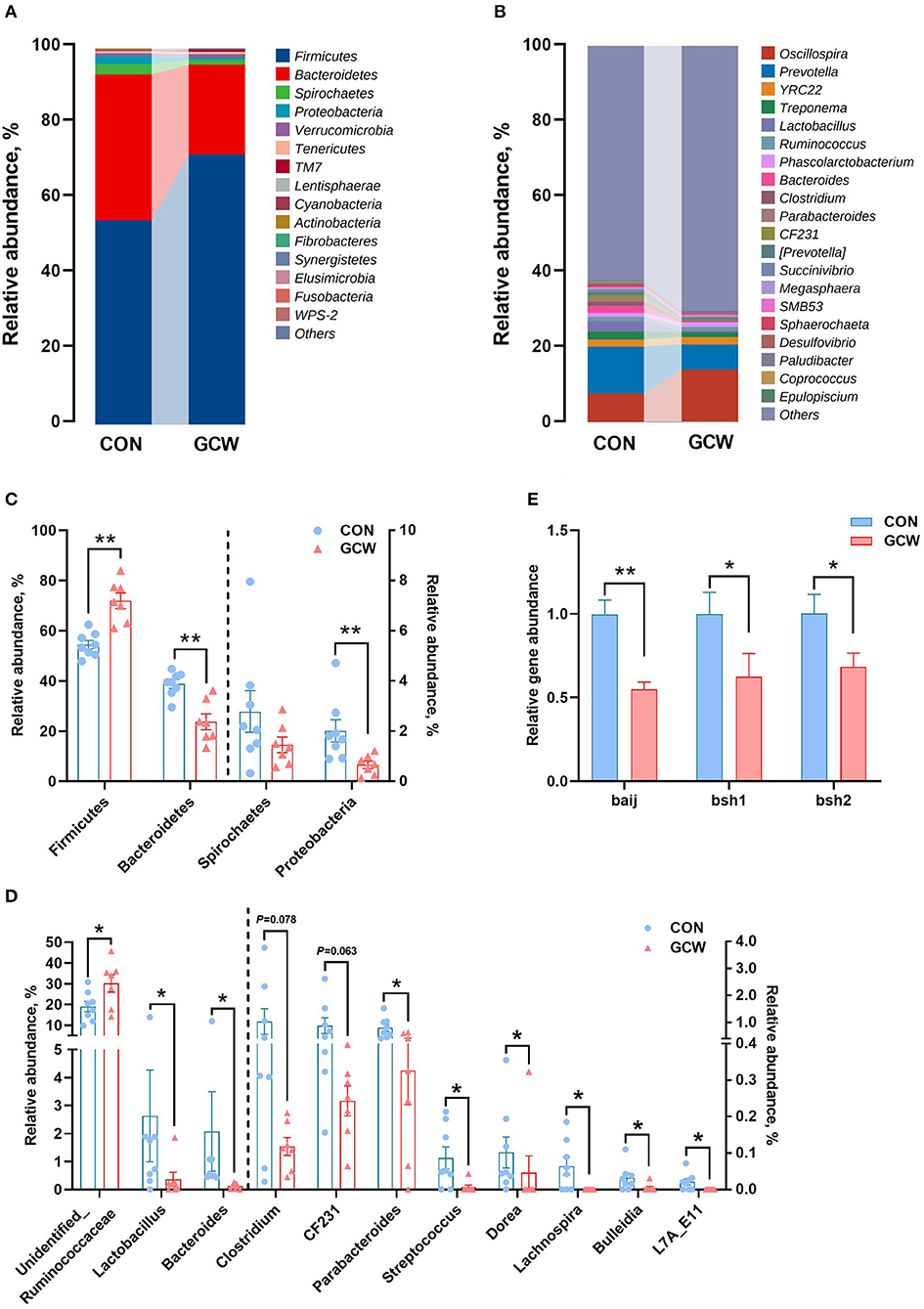 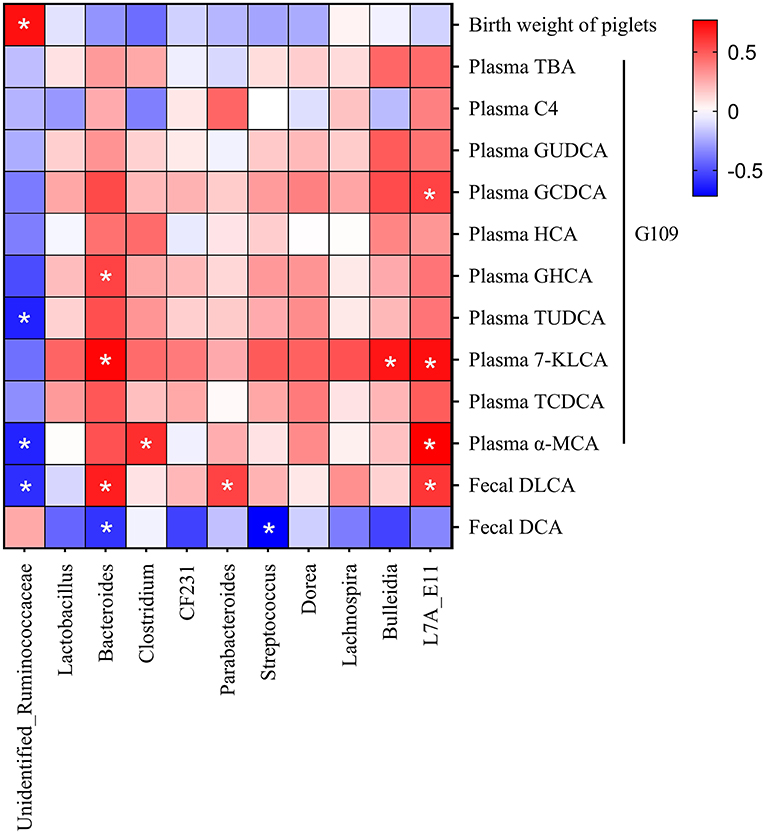 Previous studies have explored interaction between dietary fiber, bile acids, and the gut microbiota (11). However, the effects of dietary soluble fiber on bile acid homeostasis during gestation have not been fully explored. Bile acids bind to the nuclear receptor FXR, which is primarily expressed in hepatocytes and distal ileal enterocytes, and thus regulate their own biosynthesis and transport (27). A recent study on pregnant women and mice reported reduced ileal FXR-mediated suppression of bile acid synthesis in the liver, resulting in hypercholanemia (28). In this study, dietary GCW treatment reduced plasma C4 level (reflecting lower hepatic bile acid synthesis). GCW-fed sows showed lower plasma primary bile acids, such as GCDCA, GHCA, and TCDCA, implying that GCW reduced hepatic bile acid synthesis. Bile acids such as HCA species (e.g., HCA and HDCA), GUDCA and TUDCA are antagonists of FXR (12, 29). Furthermore, plasma levels of GUDCA, TUDCA and GHCA were lower in the GCW group, which inhibited FXR signaling activity thus increasing hepatic bile acid synthesis. Notably, the levels of plasma conjugated bile acids were lower in the GCW group than in controls, which implies that conjugated bile acids were harmful to fetal pigs.

Guar gum binds to bile acids in the intestinal lumen and enhances their excretion in feces (30), which, in turn, lowers TBA concentration in plasma. However, concentration of fecal total bile acids was not significantly different between the two groups, which could be due to differences in fiber composition. The fecal total bile acid excretion was not evaluated in this, which is a potential limitation to our study. An increased intestinal permeability was detected in ICP patients during pregnancy, which may enhance the absorption of bacterial endotoxin (31). Furthermore, the disorder of bile acid metabolism in the late stage of pregnant mice could be induced by intraperitoneal injection of lipo-polysaccharide (LPS) (32). Notably, dietary GCW treatment reduced intestinal permeability and plasma endotoxin level (date not shown) and increased relative abundances of butyrate-producing bacteria (Ruminococcaceae) on day 109 of gestation. Also, GCW-fed sows showed higher plasma and fecal butyrate levels on day 109 of gestation (date not shown), which led to a strengthened gut barrier function. Therefore, the present study did not exclude that dietary GCW treatment reduced plasma TBA levels via downregulating plasma endotoxin levels of sows during gestation.

Previous studies report that dietary fiber modulates intestinal microbiota composition (33). Decreased microbiome diversity is a feature of dysbiosis (34). In this study, dietary GCW treatment reduced microbiome alpha diversity, possibly by selectively inhibiting the growth of harmful microorganisms (such as several members of the phyla Proteobacteria), which was consistent with findings from prior studies (35, 36). In the large intestine, gut microbiota-derived bile salt hydrolases (BSH) deconjugates host-derived conjugated primary bile acids to produce free primary bile acids, taurine and glycine (9). Metagenomic analyses show presence of BSH genes in Gram-positive bacteria genera (e.g., Lactobacillus, Bifidobacterium, Enterococcus, Clostridium, and Listeria) and Gram-negative bacteria genera (e.g., Bacteroides) (37). Upon deconjugation, the hydroxyl group at the C7 position of bile acids is then removed by 7α-dehydroxylating bacteria (e.g., Clostridium and Eubacterium), thus converting primary bile acids to secondary bile acids (38). In this study, dietary soluble fiber treatment increased the relative abundance of Ruminococcaceae, which was correlated with increase in the level of fecal DCA. Notably, members of Ruminococcaceae are can carry out 7α-dehydroxylation resulting in formation of secondary bile acids (39, 40). The bsh1 and bsh2 genes participated in converting conjugated bile acids to unconjugated bile acids (41). The baij gene could participate in the process of converting primary bile acids into secondary bile acids (42). Microbiota-derived bile acids, LCA and DCA and their taurine and glycine conjugated forms have high affinities for G protein Bile acid-activated receptor (GPBAR)-1, also known as TGR5 (43). Furthermore, the relative abundance of BSH-encoding bacteria (including Lactobacillus and Bacteroides) were lower in the GCW group compared with the levels in the control group. However, the concentration of fecal total glycine-conjugated and taurine-conjugated bile acids were not significantly different between two groups. Notably, the abundance of bile acid-metabolizing intestinal bacteria coincided with the expression levels of bacterial bile acid metabolism-related genes.

The animal study was reviewed and approved by Institutional Animal Care and Use Committee of Huazhong Agricultural University. Written informed consent was obtained from the owners for the participation of their animals in this study.

This research was supported by the National Natural Science Foundation of China (31772609) and Hubei Province Science and Technology Innovation Major Project (2019ABA081).

The Supplementary Material for this article can be found online at: https://www.frontiersin.org/articles/10.3389/fvets.2021.756910/full#supplementary-material

Copyright © 2021 Wu, Yin, Cheng, Xu and Peng. This is an open-access article distributed under the terms of the Creative Commons Attribution License (CC BY). The use, distribution or reproduction in other forums is permitted, provided the original author(s) and the copyright owner(s) are credited and that the original publication in this journal is cited, in accordance with accepted academic practice. No use, distribution or reproduction is permitted which does not comply with these terms.