The pharmacokinetic profiles and bioequivalence of two cefpodoxime proxetil tablets were investigated in Beagle dogs. A single-dose, four-way complete replication and crossover design was used in the present study. A total of 28 healthy Beagle dogs (half male and female) with an average body weight of 11.1 kg were randomly allocated to this study. A whole reference or test tablet containing the equivalent of 100 mg of cefpodoxime was administered orally to each dog. Serial plasma samples were collected, and cefpodoxime concentrations were determined by ultra-performance liquid chromatography-mass spectrometry (UPLC-MS/MS). Then a non-compartmental method was used to calculate the pharmacokinetic parameters of both tablet formulations. The average bioequivalence (ABE) or reference-scaled average bioequivalence (RSABE) methods were used to determine the 90% confidence interval (CI) of AUCINF_obs and Cmax. No significant differences were observed for both parameters between both tablets. The test formulation was bioequivalent to the reference one because the 90% CI ranges of Cmax and AUCINF_obs were all between 80 and 125%.

In veterinary clinics, cefpodoxime proxetil is the most often prescribed oral third-generation cephalosporin antibiotic (1). It is a prodrug ester created expressly to be stable in the stomach, and intestinal brush border enzymes would convert it to the active cefpodoxime (2). Cefpodoxime exhibits good activity against many gram-positive and gram-negative organisms and good tissue penetration. It prevents the synthesis of bacterial cell walls, just like other cephalosporins. Its covalent attachment to penicillin-binding proteins (PBPs), which are necessary for the synthesis of bacterial cell walls, is the primary cause of this interference. Cefpodoxime proxetil is therefore regarded as antibacterial. It was also stable toward the most commonly found plasmid-mediated beta-lactamases (3).

Dogs with skin infections (wounds and abscesses) caused by various bacteria, including Staphylococcus intermedius, Staphylococcus aureus, Streptococcus canis, E. coli, Proteus mirabilis, and Pasteurella multocida, are frequently treated with cefpodoxime proxetil (4–7). The minimum inhibitory concentration (MIC) values of cefpodoxime varied from 0.06 to 256 μg/mL against E. coli isolates (n = 2,392), with MIC50 and MIC90 values of 0.5 and 32 μg/mL, respectively (8). Cefpodoxime had a lower rate of resistance (13 vs. 98% for cephalothin, 48% vs. ampicillin, 40% vs. amoxicillin-clavulanic acid, and 18% vs. ticarcillin-clavulanic acid) than other cephalosporins (8). Similar MIC values, ranging from 0.12 to 256 μg/mL, were also reported for cefpodoxime against canine E. coli isolates (n = 301) (9). However, higher MIC values were found for cefpodoxime proxetil, which were 53.33, 85.33, 53.33, 26.67, 42.67, 85.33, and 42.67 μg/mL against E. coli, Salmonella, Proteus mirabilis, Pasteurella, Shigella dysenteriae, Staphylococcus, and Streptococcus agalactiae, respectively (10). It should be noted that the isolated source of those strains was not available. And we cannot confirm whether the bacteria were isolated from dogs or other animals.

A total of 28 healthy Beagle dogs (half male and female) provided by Beijing Amersey Biotechnology Co., Ltd. (Beijing, China) were enrolled in the present study. Their body weights ranged from 10.1 to 12.05 kg. All dogs were subjected to physical examinations by a veterinary to ensure their health. Animals were housed individually in large wire cages (130 × 100 × 120 cm) in a room where temperature and humidity could be controlled. The room temperature was maintained between 24 and 28°C with relative humidity at 40–50%. All dogs were fed a dog food for all life stages (Pholiton®) twice daily and given water ad libitum. These dogs were acclimated to experimental conditions for 1 week, during which neither vaccines nor drugs were given. Animal experiments were conducted under protocols approved by the local Institutional Animal Care and Use Committee (IACUC), and the approved # was 13303-19-E-004.

Because cefpodoxime proxetil tablet has been proved as a highly variable veterinary drug (13), this study was performed in a single-dose, four-way complete replication and crossover design (14, 15). All dogs were randomly and equally divided into two groups [Reference-Test-Reference-Test (RTRT) and Test-Reference-Test-Reference (TRTR) groups]. Reference and test tablets were alternately given to both groups in four phases. Specifically, in phases 1 and 3, dogs in the RTRT group orally received reference tablets, while those in the TRTR group were orally administered test tablets; in phases 2 and 4, both groups received different cefpodoxime proxetil tablets in phases 1 and 3. All dogs were fasted for 16 h before and 8 h after drug administration. Between each phase, a washout period (1 week) was scheduled. A whole tablet containing the equivalent of 100 mg of cefpodoxime was administered to each dog at each dose. The dose was ~9 mg/kg of body weight because the average body weight of dogs was 11.1 kg.

For mass spectrometry analysis, data was acquired using electrospray ionization (ESI) in the positive mode; the capillary voltage was set at 3,500 V. The ion source and desolvation temperatures were maintained at 120 and 350°C, respectively. The mass spectrometer was operated in MS/MS mode using multiple reactions monitoring (MRM) mode.

The 90% confidence interval (CI) is advocated by the Center for Veterinary Medicine (CVM) in the US FDA as the best available method for evaluating bioequivalence data. And the critical parameters for bioequivalence are AUCINF_obs and Cmax (17). A non-compartmental analysis method (18) was used to determine these pharmacokinetic parameters using Phoenix WinNonLin software (Version 8.1; Certara) (19), then the average bioequivalence (ABE) analysis was performed based on the guidance by US FDA (17). Mixed model analysis was used to estimate upper and lower bounds for all three parameters of both formulations. The recommended bioequivalent limit is 80–125% (17, 20). For a pharmacokinetic parameter, if its within-subject standard deviation (SWR) is above 0.294, its within-subject coefficient of variation (CVW%) will be >30%. In this case, the reference-scaled average bioequivalence (RSABE) method was used to perform the bioequivalence analysis (21).

Cefpodoxime was detectable within 36 h following a single oral administration of an intact cefpodoxime proxetil tablet. The average plasma concentration-time curves corresponding to both the test and the reference products are presented in Figure 1. The pharmacokinetic parameters were calculated using a non-compartmental method and are shown in Table 1. The SWR values were calculated as 0.381 and 0.281 for ln (Cmax), and ln (AUCINF_obs), respectively. Therefore, the ABE method was used to perform the bioequivalent analysis for AUCINF_obs, while the RSABE method was used for Cmax. All results of the bioequivalence analysis are shown in Table 2, which indicates that the test and reference formulations are bioequivalent. 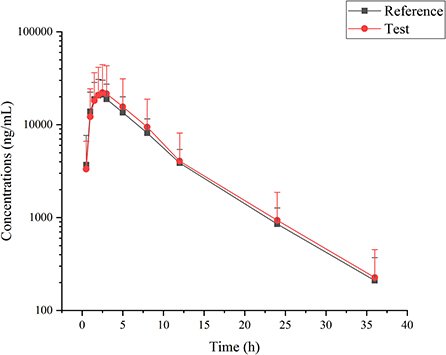 Table 2. Bioequivalent analysis of both tablet formulations of cefpodoxime proxetil in beagle dogs.

No discernible variations were seen for any pharmacokinetic parameters following oral administration of the cefpodoxime proxetil reference and test tablet formulations (Table 1). The test formulation was bioequivalent to the reference formulation, as shown by the 90% CI ranges of Cmax and AUCINF_obs, which were both between 80 and 125% (Table 2).

The current study included a four-way, single-dose, crossover design. However, a prior bioequivalence study in rabbits utilized a two-way, single-dose, and crossover design (23). Cefpodoxime has been demonstrated to be a highly variable drug (11), which is why a four-way method was used in this investigation (21). The current SWR values for ln (Cmax) and ln (AUCINF_obs) were calculated to be 0.381 and 0.281, respectively, indicating large variability. In dogs, there have been reports of greater fluctuations in the pharmacokinetic properties of cefpodoxime tablets. The average peak concentration and its SD were calculated to be 16.4 and 11.8 μg/mL, respectively (12).

The original contributions presented in the study are included in the article/Supplementary material, further inquiries can be directed to the corresponding author/s.

The animal study was reviewed and approved by the Local Institutional Animal Care and Use Committee (IACUC).

The Supplementary Material for this article can be found online at: https://www.frontiersin.org/articles/10.3389/fvets.2022.1048823/full#supplementary-material

Copyright © 2022 Gao, Sang, Li, Hao, Zhang, Li and Zhou. This is an open-access article distributed under the terms of the Creative Commons Attribution License (CC BY). The use, distribution or reproduction in other forums is permitted, provided the original author(s) and the copyright owner(s) are credited and that the original publication in this journal is cited, in accordance with accepted academic practice. No use, distribution or reproduction is permitted which does not comply with these terms.