A Model of Vaccination for Dengue in the Philippines 2016–2018

Dengue infections have increased world-wide in recent years, and dengue incidence currently affects approximately 400 million people and causes approximately 20,000 deaths each year [1]. Dengue vaccines have been developed in recent years and tested in clinical trials, and offer hope that dengue epidemics may be mitigated. A controversy, however, surrounds dengue vaccine. This controversy is associated with dengue antibody-dependent enhancement (ADE). Dengue ADE occurs after a primary dengue infection. The primary infection promotes the production of antibodies in the immune system, which are specific to the strain of the dengue virus, trap and kill this strain in the blood, and can remain in the blood for decades [2]. Dengue virus is present in four strains, and the antibodies specific to the strain of the primary infection cannot bind well with a secondary infection of a different strain. Instead, these antibodies may promote replication of a secondary infection of a different strain, with much greater disease severity than the primary strain infection.

In the Philippines, reported dengue deaths average approximately 750 people per year, with a high proportion of these deaths in younger age groups. In April 2016, the Philippines began a dengue vaccination program of 9 years old children. The program involved approximately 875,000 9 years olds, each receiving at least one dose, approximately 400,000 receiving two doses, and approximately 350,000 receiving all three doses [4, 5]. The program was terminated in December 2017, because of 12 confirmed deaths due to dengue infection of these vaccinated children [6]. As of September, 2018, 19 dengue deaths of vaccinated children had been confirmed [7]. At issue is whether these deaths were due to ADE and the failure of the vaccine to prevent a subsequent infection, and was the vaccination program justified.

2.1 Data of the Epidemic

TABLE 1. Age structured data of the dengue epidemic in years 2016, 2017, 2018. The reported data is age structured according to 5–9 or 10–14 years age brackets. The data contains no information about the effects of vaccination of this population. The data is obtained from [8] and is provided in the Supplementary Materials.

Thus, 37 reported deaths occurred in reported cases from April 3, 2016 to September 30, 2018, in 875,000 children who were 8 or 9 years old in 2016, according to the reported data in [8]. Since September 30, 2018, the Republic of the Philippines Department of Public Health has not provided further information about confirmed deaths due directly to dengue infection of the 875,000 vaccinated children.

2.2 Equations of the Model

The compartments of the model are given in Table 2 and illustrated in Figure 1.

TABLE 2. Compartments of the model. 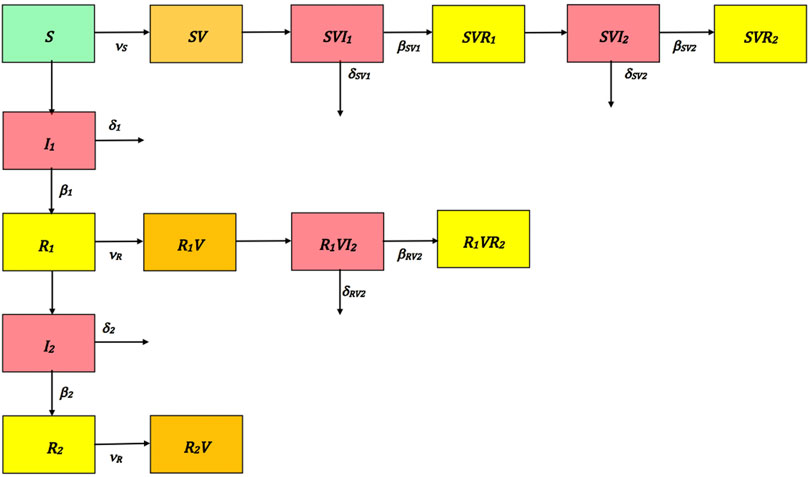 FIGURE 1. Compartments of the model with vaccination.

2.3 Parameters of the Model

Λ(t) indirectly models the infection rate of these children due to mosquitoes. The seasonality of the mosquito population is incorporated indirectly into Λ(t). We do not model the mosquito population directly, but assume the mosquito infection rate of 5–14 years olds is proportional to the reported case data in this age range. The value of α is chosen so that the dynamics of the model equations yield the general epidemic data for ages 9, 10, 11, in 2016, 2017, 2018, respectively, and for the 19 reported deaths of vaccinated 875,000 9 years olds for whom the vaccination failed in the period April 2016 to September 2018.

The time dependent vaccination rate νS(t) of previously uninfected 9 years olds incorporates multiple doses. This parameter involves a rate per week corresponding to the vaccine-effectiveness. We first assume a weekly rate 0.06, which corresponds to 70% effectiveness overall (Figure 4). The vaccine-effectiveness percentage is controversial, and we will explore outcomes with other values [11–13]. We assume the time dependent vaccination rate νR(t) of previously infected susceptibles is the same as νS(t), and the fraction of vaccination effectiveness is also the same. The formula for νS(t) is 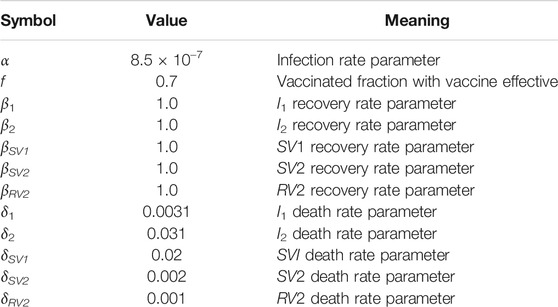 TABLE 3. Parameters of the model.

TABLE 4. The reported number of infected in the population of vaccinated children, 2013–2017.

2.5 Initial conditions of the Model

The initial conditions of the model (Table 5) are chosen to correlate with the data of reported cases and reported deaths of the population of vaccinated 875,000 8 and 9 years olds in the time period April 3, 2016 to December 1, 2017 (beginning to ending of the vaccination program) and April 3, 2016 to September 30, 2018 (beginning to ending to the reported deaths in this population). The initial conditions for the compartments of the model are approximately 95% of 875,000, because it is assumed approximately 5% of the vaccinated children will not be successfully monitored for infection.

The model output for the case that all 875,000 9 years olds are vaccinated is given below.

In Figure 4 the graph of the cumulative number of vaccinated is given. The vaccine efficiency is 70%, which is interpreted as failure of the vaccine to prevent infection in 30% of the vaccinated 875, 000 9 years olds.

FIGURE 5. All 875,000 9 years olds are vaccinated. The cumulative number of deaths each week in the compartments I1(t), I2(t), SVI1(t). Most of the deaths occurred in vaccinated 9 year olds, who were not infected before vaccination, and became infected after vaccination as a result of vaccine failure (SVI1(t)).

In Figure 6 the graph of the cumulative number of all deaths each week of the 875,000 vaccinated 9 years olds is given. The number of all deaths in 2016, 2017, 2018 is ≈30. From the beginning of the vaccination program (April 4, 2016) to the date of the last reported deaths (September 2018), 19 of the deaths occurred in vaccinated 9 years olds, who were not infected before vaccination, and became infected after vaccination as a result of vaccine failure, which agrees with the number reported by the Philippines Department of Public Health during this time period.

3.3 Only Previously Infected of the 875,000 Nine Year Olds are Vaccinated

FIGURE 9. Only previously infected of the 875,000 9 years olds are vaccinated. The cumulative number of deaths each week of primarily infected I1(t) and secondary infected I2(t).

3.4 Varying the Fraction of Vaccination Efficacy

In this section we vary the parameter f corresponding to the fraction of vaccinated for which the vaccine used in the Philippines was effective. The value of f depends on strain serotypes 1–4, specific locations, age levels at vaccination, serostatus, and other factors. Currently, new vaccines are being developed and undergoing clinical trials with possible improved efficacy. The World Health Organization has reported various efficacies from Phase 3 clinical trials, ranging from 43% to 79% [11].

In 2018, WHO advised that prior screening for dengue infection was preferable, but if not feasible, general dengue vaccination programs could be administered to individuals age nine and older, if the population had a dengue endemicity rate higher than 80% [14]. In June 2021, the CDC Advisory Committee on Immunization Practices (ACIP) recommended use of Dengvaxia to prevent dengue in children aged 9–16 years, with laboratory-confirmed previous dengue virus infection and living in areas where dengue is common [17].

The vaccination program in the Philippines may have prevented a significant number of deaths, although a controversy still surrounds the issue of whether the vaccine itself contributed to some of the deaths of the children uninfected before vaccination. If these children had not been vaccinated, it is likely that they would not have died. The fundamental axiom of medicine is to do no harm. If the vaccine fails to prevent a subsequent infection resulting in death in someone who has not been previously infected, the vaccine has caused harm. But what is the threshold of harm, as opposed to the society benefit of the vaccine for prevention of deaths?

In general, if the vaccine efficacy is sufficiently high, then a consequent significant reduction in the number of deaths justifies the vaccination program in all age groups. A further consideration is the possibility of reducing the number of cases that occur in a dengue epidemic by vaccinating most or all individuals in all age groups in an on-going general vaccination program. The model analysis reveals that the total number of dengue cases are greatly reduced if all individuals are vaccinated, but not significantly reduced if only previously infected individuals are vaccinated. Thus, a general on-going vaccination program of all individuals could reduce the infected mosquito population, which would reduce the disease infection rate proportionately. Over time the dengue epidemic could be effectively eradicated.

Publicly available datasets were analyzed in this study. This data can be found here: https://doh.gov.ph/statistics.

The Supplementary Material for this article can be found online at: https://www.frontiersin.org/articles/10.3389/fams.2021.760259/full#supplementary-material

9.Centers for Disease Control and Prevention. Estimates of Vaccine Hesitancy a COVID-19 (2021). Available at: https://data.cdc.gov/stories/s/Vaccine-Hesitancy-for-COVID-19/cnd2-a6zw.

50.World Health Organization. Update on the Dengue Situation in the Western Pacific Region (2021). Available at: www.who.int/news-room/fact-sheets/detail/dengue-and-severe-dengue.

Copyright © 2021 Magal, Seydi, Webb and Wu. This is an open-access article distributed under the terms of the Creative Commons Attribution License (CC BY). The use, distribution or reproduction in other forums is permitted, provided the original author(s) and the copyright owner(s) are credited and that the original publication in this journal is cited, in accordance with accepted academic practice. No use, distribution or reproduction is permitted which does not comply with these terms.