Cold Sensitivity in Ulnar Neuropathy at the Elbow - Relation to Symptoms and Disability, Influence of Diabetes and Impact on Surgical Outcome

Cold sensitivity, an abnormal painful response to cold exposure, is a debilitating condition, which often occurs after hand trauma, as a result of peripheral nerve injuries, and in carpal tunnel syndrome (CTS) (1). Cold sensitivity is also a symptom of ulnar neuropathy at the elbow (UNE) (2). UNE has an incidence rate of 21-30/100 000 person-years (3, 4). It occurs when the ulnar nerve becomes compressed at elbow level for example beneath the Osborne’s ligament. When the nerve is compressed disruptions occur in the intraneural microcirculation, leading to epineural oedema and dynamic ischemia, inhibition of axonal transport and subsequent structural changes in the nerve fibres with axonal degeneration. The ischemia triggers early symptoms of UNE, such as paraesthesia and numbness, and later permanent sensory and motor loss may be seen, possibly caused by axonal degeneration (5). The structural axonal alterations in UNE, which may involve nerve fibres of different sizes, i.e. myelinated and non-myelinated nerve fibres, and their relation to the pathophysiology of cold sensitivity, remain unknown (6). Cold sensitivity is more common in people with diabetes, BMI >25, rheumatic diseases and in women (2, 7). It is associated with reduced quality of life and characterized by pain, stiffness, weakness, numbness and colour changes in the affected body part (8, 9). The causes for the occurrence of cold sensitivity in UNE and the influence of diabetes as well as the effects of surgery are not entirely clear. The aim of this study was to investigate the presence of cold sensitivity in those with UNE at the elbow requiring surgical treatment, its relation to other symptoms and disability, the influence of gender and diabetes, as well as the effects of surgical treatment.

All patients ≥18 years operated on for UNE (identified through the ICD-10 code G562 and surgical KKÅ97 codes ACC53, ACC43 or NCK19) from 2010-2016 registered in the Swedish National Quality Register for Hand Surgery (HAKIR) were included in the study. Patients completed the Swedish version of the QuickDASH questionnaire (10) and a symptom questionnaire (HAKIR questionnaire-8, HQ-8) before and three and 12 months after surgery (11). If the questionnaires were not digitally returned after two days, one reminder was sent by text message (12). The HQ-8 questionnaire comprises eight questions concerning: pain on load; pain on motion without load; pain at rest; stiffness; weakness; numbness; cold sensitivity; and ability to perform daily activities (11). The answers to each question are reported on a Likert scale. Check boxes are marked with 0, 10, 20…100; i.e. 100 signifies the worst possible perceived symptom. Based on answers to the relevant question in HQ-8, we have earlier defined three degrees of severity of cold sensitivity; mild (score <30), moderate (30–70) and severe (>70) (1). The QuickDASH is an 11-item questionnaire which provides overall information about the patient’s perceived disability in upper extremity musculoskeletal disorders. It is a shortened version of the well-established 30-item DASH-questionnaire and is considered similarly accurate (13). Each question is scored one to five. A total score for the entire questionnaire ranges from zero to 100, where 100 signifies the worst possible disability. The presence of diabetes at surgery and preoperative data on HbA1c levels were collected from the NDR. The NDR was started in 1996 and today includes the majority of people with diabetes in Sweden (14). Personal identification numbers were used to link data from the HAKIR and the NDR.

Normally distributed data are presented as mean ± standard deviation (SD); non-parametric data as a median [interquartile range, IQR] and nominal data as a number (%). For comparisons of nominal data, we used the Chi-squared test. The Kruskal Wallis test and Mann-Whitney U test were used for group comparisons. Linear regression analysis was used to study the effect of cold sensitivity on QuickDASH scores and the effect of diabetes on cold sensitivity scores. The linear regression analyses were adjusted for age, sex and diabetes (when applicable). Spearman’s correlation was used to assess correlation between preoperative cold sensitivity and preoperative total QuickDASH score. We interpreted an r-value of 0.30-0.70 as a moderate correlation and >0.70 as a strong correlation. Each operated arm was considered a separate statistical entity. A p-value of <0.05 was considered statistically significant. IBM SPSS Statistics (version 27; SPSS Inc., Chicago, IL, USA) was used for all statistical calculations and spider diagrams were created in Microsoft Excel for Mac, version 16.16.27 (Microsoft).

The Regional Ethics Review Board in Lund, Sweden approved the study (2016/931, 2018/57 and 2018/72). Everyone provides informed consent before being registered in HAKIR and NDR.

Persons With and Without Diabetes

Table 2 Characteristics and QuickDASH (short version of the Disabilities of the Arm, Shoulder and Hand) scores of cases with mild, moderate, and severe cold sensitivity treated for ulnar neuropathy at the elbow (UNE). 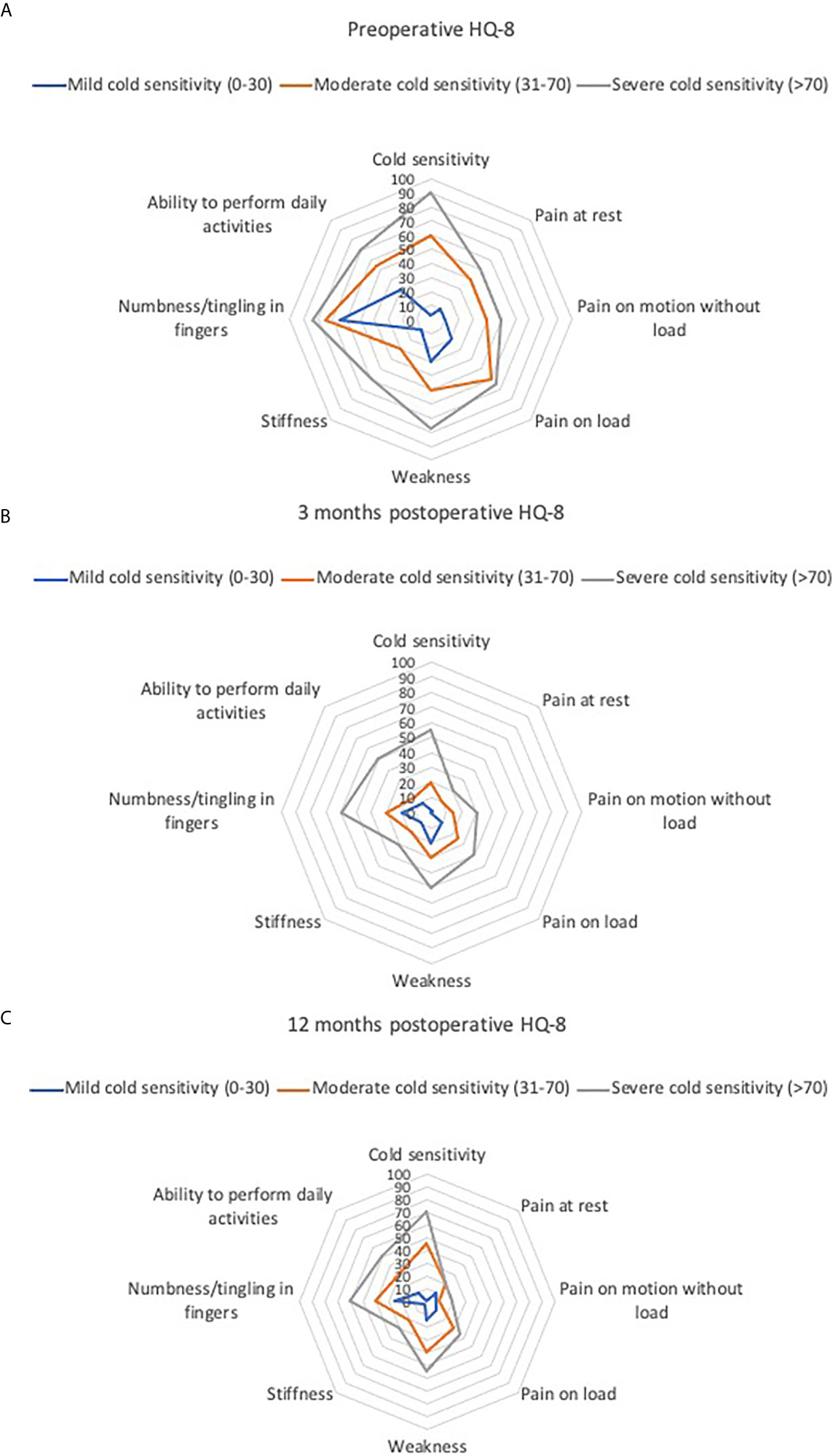 According to Swedish studies, cold sensitivity affects 5-14% of the normal population, with the highest prevalence in the northern, and generally colder, parts of Sweden (17, 18). It is plausible that the same should apply to people with UNE and cold sensitivity. Since our study included persons from the whole of Sweden, the risk of selection bias is reduced thus strengthening our findings. It would also be interesting to compare our results with a study performed in a warmer country.

Despite our research being based on the largest available register in Sweden concerning UNE, the main limitation of our study is the low response rate. Probably, this is partly due to the difficulty in motivating people to answer questionnaires. As sample size decreases, sub-analyses become more difficult to power properly, and a low response rate elevates the risk of selection bias. Motivation might drive some people to be more likely to participate than others. For instance, those with worse symptoms may be more prone to respond preoperatively, and postoperatively; it is possible that very pleased or dissatisfied people are more interested in answering surveys. Unfortunately, this potential bias is hard to fully evaluate in retrospect. Instead, we compared the characteristics of responders and non-responders. We saw no differences preoperatively, thus the surveys seem to be equally accessible for all ages. However, since scoring on QuickDASH differs between sexes and ages, the increased age and the majority of women among responders postoperatively might skew the results. To circumvent that as far as possible, we adjusted the linear regression analysis for sex and age. We also had no data on preoperative neurography testing; thus, no information about the presence of axonal degeneration. In future studies, it could be valuable to study the correlation between preoperative neurography values and other parameters e.g. function of different types of nerve fibres with various diameters, and cold sensitivity as well as prediction of outcome.

Public access to data is restricted by the Swedish Authorities (Public Access to Information and Secrecy Act; https://government.se/information-material/2009/09/public-access-to-information-and-secrecy-act/), but data can be available for researchers after a special review that includes approval of the research project by both an Ethics Committee and the authorities’ data safety committees.

The studies involving human participants were reviewed and approved by Regional Ethical Review Board in Lund, Sweden 2016/931, 2018/57 and 2018/72. The patients/participants provided their written informed consent to participate in this study.

All authors interpreted the data and critically reviewed the report. MZ and HP collected and analyzed the data as well as drafted the first manuscript. A-MS and KE-O were responsible for collecting the data from the diabetes register. MZ, EN, and LD generated the hypothesis and outline of the project. A-MS and KE-O contributed to hypothesis generation and to writing the manuscript. All authors fulfilled the criteria for authorship. All authors contributed to the article and approved the submitted version.

The authors would like to thank all participants and staff in HAKIR and NDR, and Tina Folker for the administrative work. We would also like to thank Pat Shrimpton for the language revision.

10. The Swedish Translated Version of QuickDASH [2019-01-15]. Available at: http://www.dash.iwh.on.ca/assets/images/pdfs/QuickDASH_Swedish.pdf.

Copyright © 2021 Zimmerman, Peyron, Svensson, Eeg-Olofsson, Nyman and Dahlin. This is an open-access article distributed under the terms of the Creative Commons Attribution License (CC BY). The use, distribution or reproduction in other forums is permitted, provided the original author(s) and the copyright owner(s) are credited and that the original publication in this journal is cited, in accordance with accepted academic practice. No use, distribution or reproduction is permitted which does not comply with these terms.