Meredith A. Redd3 and

Although the cardiac complications of IAV infection are now well established, the role of specific host co-morbidities in their development is unknown. Given the association of diabetes mellitus (DM) with both CVD (Giacco and Brownlee, 2010) and severe IAV (Reading et al., 1998), we hypothesised that DM is an important risk factor for cardiac complications from IAV infection. While clinical studies have recently been conducted on this topic, none differentiated between types 1 and 2 DM (T1- and T2DM), nor controlled for obesity (Samson et al., 2019; Chow et al., 2020; Modin et al., 2020), which we have shown to independently increase IAV-induced cardiac complications (Siegers et al., 2020). Here, we assessed whether DM contributes to increased IAV-associated cardiac impairment in T1DM IAV-infected mice.

Cardiac function was assessed at six days post-infection (d.p.i.) in all mice using the Vevo 3100 Imaging Platform (Fujifilm, Japan) with a 25-55 MHz transducer (MX550D). All measurements and analyses were conducted in a blinded manner. Mice were anesthetized with 2.5% isoflurane and general anesthesia maintained with 1% isoflurane during echocardiography. Mice in supine position were placed on a heating pad and heart rate and electrocardiography recorded. Body temperature was controlled and monitored for the duration of the echocardiography to maintain 37.0±0.5°C. Two-dimensional B-mode images were recorded in parasternal long axis view to determine ejection fraction (EF), stroke volume (SV), and cardiac output; and short-axis view to determine right ventricular (RV) fractional areas change (FAC). M-mode images were recorded in short-axis view to determine left ventricular (LV) end systolic and diastolic volumes, anterior wall thickness during systole and diastole (LVAW;s and LVAW;d), posterior wall thickness during systole and diastole (LVPW;s and LVPW;d), and mass, as well as RV free wall thickness (RVFWT); and in four-chamber view to determine tricuspid annular plane systolic excursion (TAPSE). Pulse-wave Doppler with color images were recorded in short-axis view to determine pulmonary acceleration time (PAT). Pulse-wave tissue Doppler images were recorded in four-chamber view to determine tricuspid and mitral early diastolic myocardial relaxation velocity (E’). CO, SV, and LV mass and volume during end systole and diastole were normalized to body weight [cardiac index, stroke volume index, LV mass index, LVESVI and LVEDVI, respectively]. While it was considered that normalizing to body weight when significant weight was lost over the course of infection might lead to overestimation of values indicating hypertrophy, as there was no significant difference between the final body weights of the infected diabetic and control group it was decided that this was acceptable. Recorded images were analyzed using Vevo LAB 3.1.1 software (VisualSonics, Toronto, Canada). Photographs exemplifying the analysis methods for different echocardiogram parameters are shown in Supplementary Figure 1. Parameters were measured three times per mouse in at least six mice and averages presented. Due to biosafety control measures, we were unable to measure and thus normalize to pre-infection baseline levels for each treatment group.

The left lung lobe was fixed in 10% neutral-buffered formalin, routine processed and embedded in paraffin, sectioned at 5μm and stained with hematoxylin and eosin. Sections were assessed for vascular changes, bronchitis, interstitial inflammation, alveolar inflammation, pneumocyte hypertrophy, and pleuritis by a veterinary pathologist blinded to the study design.

Data are pooled from two experiments, the initial containing six mice per group and the repeat containing 3 mice per group. Outliers were removed by ROUTS test (Q=1%). Normalcy was determined by D’Agostino-Pearson omnibus test or Shapiro-Wilk test. Body weight data were analysed using repeated measures three-way ANOVA, and other data were analysed using two-way ANOVA with P<0.05 indicating statistical significance. Where data was not normally distributed, statistics were performed on log-transformed data if this attained closer-to-normal distribution or untransformed data if transforming did not achieve closer-to-normal distribution, and presented as median ± IQR. Normally distributed data were presented as mean ± SEM.

Pulmonary Severity of IAV Is Not Increased in Mice With T1DM 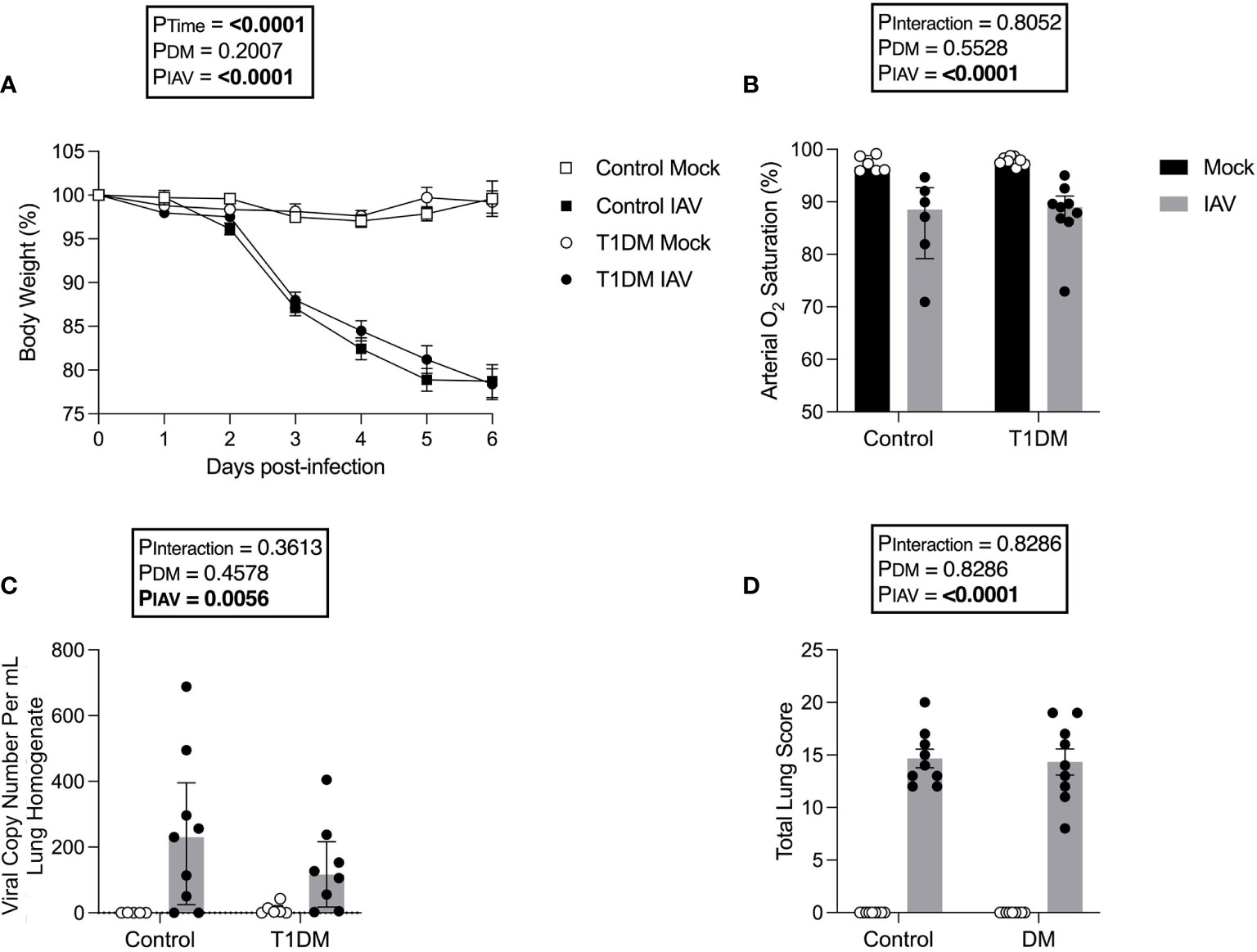 Markers of Cardiac Damage Are Elevated in IAV-Infected T1DM Mice

We next sought to assess whether there was evidence of increased CVD in T1DM mice with IAV, despite the absence of increased respiratory disease. IAV infection significantly increased serum CTNI and CK-MB in T1DM, but not in control, mice (Figures 2A, B). 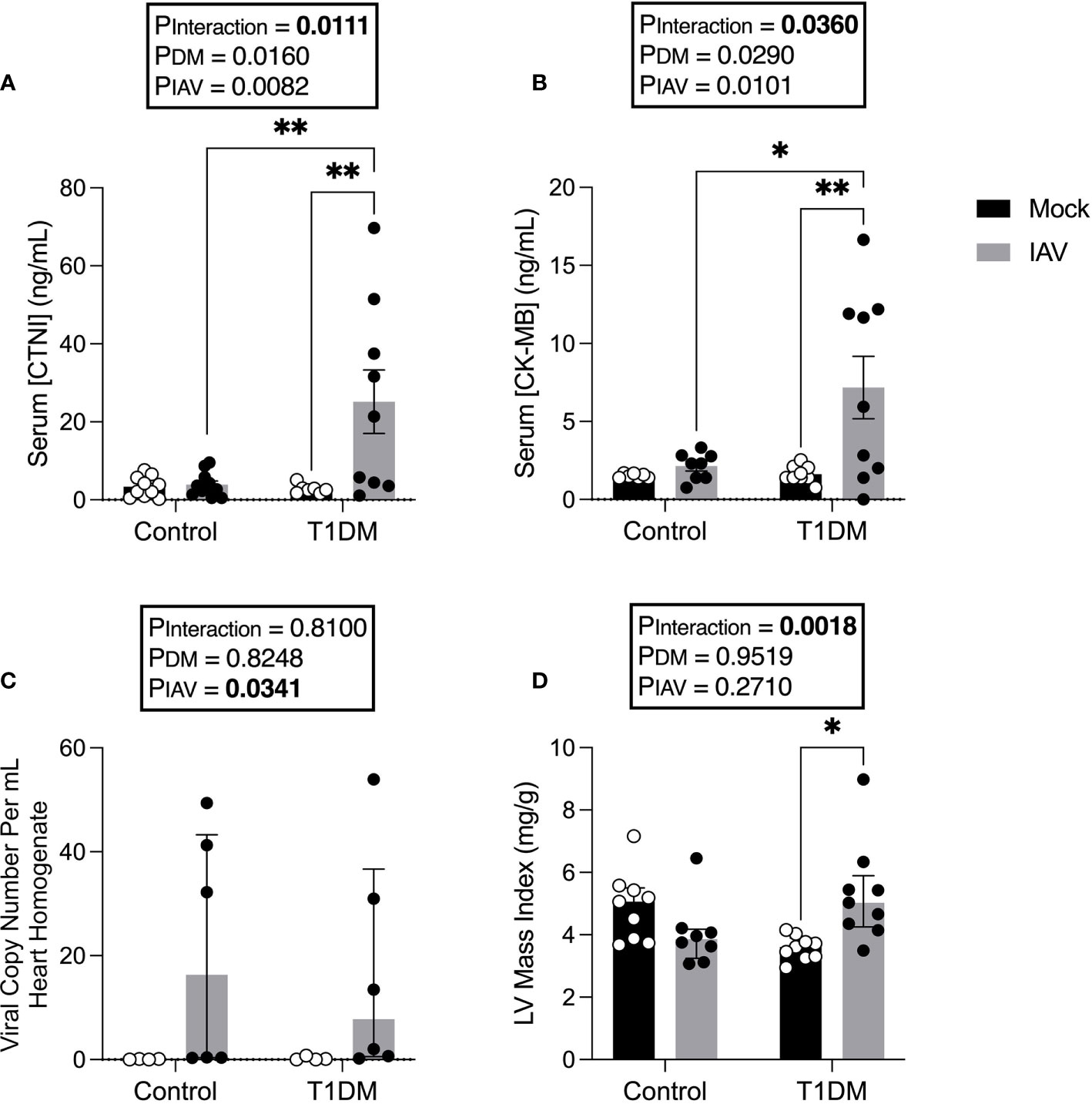 To investigate whether IAV infection and DM had detrimental effects on cardiac function, echocardiograms were performed. At six d.p.i. we observed changes in cardiac structure and function (Table 1). Functionally, IAV decreased cardiac index within the LV. In the RV, IAV decreased PAT, the magnitude of tricuspid E’ and TAPSE. Structurally, IAV increased LVPW;s. DM increased LV stroke volume index and cardiac index. IAV and DM interactions were attributable for a significant increase in LV mass index in T1DM mice only upon IAV infection (Figure 2D).

IAV infection has been linked with cardiac complications, however the mechanisms by which this occurs and whether this is more pronounced in patients with DM remains unclear. This is vital information for both patient management as well as future pandemic preparedness.

No significant difference in IAV severity was observed between control and T1DM mice. While this was unexpected, a prior study has reported that T1DM mice infected with either A/Phil/82(H3N2) or A/HKx31(H3N2) IAV had increased viral titers compared to non-DM mice. In contrast, no difference in A/PR/8/34 was observed, attributed to the collectin resistance and poor glycosylation of A/PR/8/34 (Reading et al., 1998).

Despite no significant difference in respiratory disease, we observed clear elevations in serum cardiac damage biomarkers in IAV-infected T1DM mice compared to the IAV-infected control group which, coupled with the observed difference in stroke volume, suggest type II ischemia. Furthermore, echocardiography revealed numerous differences in cardiac function and structure attributable to IAV or the interaction of IAV with T1DM. Preserved EF, mitral E’, LVESVI and LVEDVI indicate no obvious LV dysfunction. However, increased wall thickness and mass index suggest that hypertrophy is more severe in infected T1DM mice than in infected controls. Within the RV, IAV infection induced decreases in TAPSE, PAT and the magnitude of tricuspid E’ indicative of both systolic and diastolic dysfunction, however FAC was preserved in both control and T1DM mice. Taken together, these data indicate that IAV infection induces mild systolic and diastolic RV dysfunction in both control and T1DM mice equally, but that LV hypertrophy is more severe in T1DM mice despite preservation of function. This early development of compensative hypertrophy may be attributable for the observed increase in serum CTNI levels in IAV-infected T1DM mice and could go on to cause maladaptive remodeling (Schiattarella and Hill, 2015).

At present, the reasons for the observed increase in IAV-induced cardiac complications in T1DM are unclear. As the respiratory infection did not increase in severity with the addition of T1DM, the observed cardiac complications are unlikely to be an indirect effect of hypoxia accompanying pulmonary distress, although pulmonary embolism or micro emboli cannot be ruled out as potential contributing factors to the observed RV dysfunction upon IAV infection. Previous studies in both human patients and mice have reported a possible direct effect of IAV or viral antigens in the heart (Davoudi et al., 2012). We observed very low viral titers within the cardiac homogenate of both T1DM and control mice, suggesting this is unlikely to be the predominant driver of the observed cardiac injury in these mice, although this effect cannot be ruled out. It is important to note that the primary feature of the T1DM model is hyperglycaemia. It is therefore tempting to speculate that we are witnessing the synergistic effect of a hyperglycaemia-induced higher baseline level of inflammation within the T1DM mice even before the infection with IAV. This already-elevated inflammation may then be tipped over a ‘breaking point’ by the infection, inducing a cytokinemia that provokes microcirculation disorders and myocardial injury (Giacco and Brownlee, 2010). These cardiac complications may, alternatively, be attributable to a multitude of other effects induced by abnormal circulating substrates, and the co-existence and complex interactions with other, even subclinical, conditions in this treatment group. Importantly, in a clinical setting the contribution of underlying DM to the risk of viral cardiac complications likely depends on the duration of pre-existing disease (Giacco and Brownlee, 2010).

Together, our data aid in understanding the role of DM in virus-induced cardiac complications and may help guide clinical management of at-risk patients, while also suggesting that reducing the burden of DM in the community is not only of benefit in and of itself but it may also play an important role in reducing the extra-respiratory complications of influenza virus.

This information has previously been presented via a poster at the Seventh ESWI Influenza Conference and the 2020 AVS Virtual Symposium. Please direct correspondence to Dr. Kirsty Short (email: k.short@uq.edu.au; Tel.: +61 7 336 54226).

The animal study was reviewed and approved by The University of Queensland Office of Research Ethics (SBMS/071/17).

KS was supported by the Australian Research Council [DE180100512]. The study sponsor/funder was not involved in the design of the study; the collection, analysis, and interpretation of data; writing the report; and did not impose any restrictions regarding the publication of the report.

The Supplementary Material for this article can be found online at: https://www.frontiersin.org/articles/10.3389/fcimb.2021.714440/full#supplementary-material

Copyright © 2021 Sinclair, Bloxham, Chiu, Chew, Russell, Yoshikawa, Bielefeldt-Ohmann, Steele, Hulme, Verzele, Noye, Wu, Reichelt, Thomas, Gallo, Redd and Short. This is an open-access article distributed under the terms of the Creative Commons Attribution License (CC BY). The use, distribution or reproduction in other forums is permitted, provided the original author(s) and the copyright owner(s) are credited and that the original publication in this journal is cited, in accordance with accepted academic practice. No use, distribution or reproduction is permitted which does not comply with these terms.