Stevens–Johnson syndrome (SJS) is an acute inflammatory vesiculobullous reaction of the skin and mucosae, including those of the eyes, oral cavity, and genitals. In patients with extensive skin detachment and a poor prognosis, the condition is called toxic epidermal necrolysis (TEN). Together, SJS and TEN form a spectrum of disease, with SJS being less severe and TEN being more severe.

Ophthalmic symptoms of SJS/TEN occur at the ocular surface and can often lead to visual loss, although only about half of all cases of SJS/TEN develop severe ocular lesions. In the acute stage, these lesions can include severe pseudomembranous conjunctivitis and ocular surface epithelial defects (Sotozono et al., 2015), which are followed by severe ocular sequelae such as dry eye, trichiasis, symblepharon, and conjunctival invasion into the cornea, which negatively affect patients’ quality of life (Sotozono et al., 2007).

When patients present in the chronic stage, it is difficult for ophthalmologists to render a differential diagnosis of either SJS or TEN because the vesiculobullous skin lesions expressed in the acute stage have healed by the chronic stage (Ueta and Kinoshita, 2012). Diagnosis of ocular SJS/TEN is usually based on a confirmed history of acute-onset high fever, serious mucocutaneous illness with skin eruptions, and involvement of at least two mucosal sites including the ocular surface (Ueta et al., 2007b; Ueta et al., 2007c; Ueta et al., 2014a; Ueta et al., 2014b; Ueta et al., 2015), as well as the presence of severe ocular sequelae. Our group defines SJS/TEN patients with severe ocular complications (SOCs) as those in the acute stage presenting with severe pseudomembranous conjunctivitis and epithelial defects on the ocular surface (cornea and/or conjunctiva) (Sotozono et al., 2009), and those in the chronic stage as presenting with severe ocular sequelae. Ophthalmologists tend to report both SJS and TEN with SOC as “SJS” in a broad sense (Ueta and Kinoshita, 2012).

Thirty-seven Japanese SJS/TEN patients with SOC (22 females, 15 males; age range 17 to 81 years; mean age, 52.19 ± 16.90) were independently recruited at the Kyoto Prefectural University of Medicine. The diagnosis of SJS/TEN with SOC was based on a confirmed history of acute-onset high fever, serious mucocutaneous illness with skin eruptions, and the involvement of at least two mucosal sites including the oral cavity and ocular surface, and the presence of severe ocular sequelae. Ten patients had contact lenses (six hard, four soft) for care of their ocular surface. All patients used some antibiotic eye drops for their increasing discharge. Nine healthy Japanese volunteers (five females, four males; age range 17 to 81 years; mean age 43.33 ± 24.82) were also recruited. All experiments were approved by both the committees of the National Institutes of Biomedical Innovation, Health, and Nutrition and Kyoto Prefectural University of Medicine and were conducted in accordance with their guidelines. Informed consent was obtained from all participants. We collected discharge from both eyes of all subjects, and when amplification by PCR was successful from discharge of both eyes, the right eye was selected in comparison between SJS/TEN with SOC and controls. Sterile cotton swabs were used, and discharges were carefully collected from the lower conjunctival sac to avoid contamination.

The output of the QIIME pipeline, in the BIOM file format, was imported into the R software environment (version 3.5.1) for analysis. Alpha-diversity indices were calculated by using the estimate_richness function in the “phyloseq” R package. Beta-diversity index, calculated by using Bray–Curtis distance and genus-level data, was determined by using the vegdist function in the “vegan” R package. Principal coordinate analysis was performed by using the dudi.pco function in the “ade4” R package. Hierarchical clustering analysis was performed using the “vegan” and “stats” R packages, based on Bray–Curtis distance matrix at the genus level, and by using the ward.D2 method (Murtagh and Legendre, 2014). Principal coordinate analysis figures were created by using the “ggplot2” R package. BlastN searches of representative OTU sequences were conducted using the rRNA_typestrains/16S_ribosomal_RNA database (last updated 2021/02/16) (Zhang et al., 2000). Statistical significance was evaluated by one-way ANOVA for comparison of multiple groups and Mann–Whitney U-test or Wilcoxon rank sum test for two groups by using Prism 7 software (GraphPad Software, CA, USA).

Potential bacterial pathogens in the eye sebum of the conjunctival fornix were identified by broth-enrichment culture methods. Samples were swabbed from the patient’s conjunctiva, mixed with 2 ml of broth, and incubated overnight at 35°C. One μl of broth was plated onto blood agar and chocolate agar and further incubated overnight at 37°C with 5% CO2. Potential bacteria were then identified by matrix-assisted laser desorption ionization–time of flight mass spectrometry (MALDI-TOF MS) using MALDI Biotyper (Bruker Daltonik GmbH, Bremen, Germany). 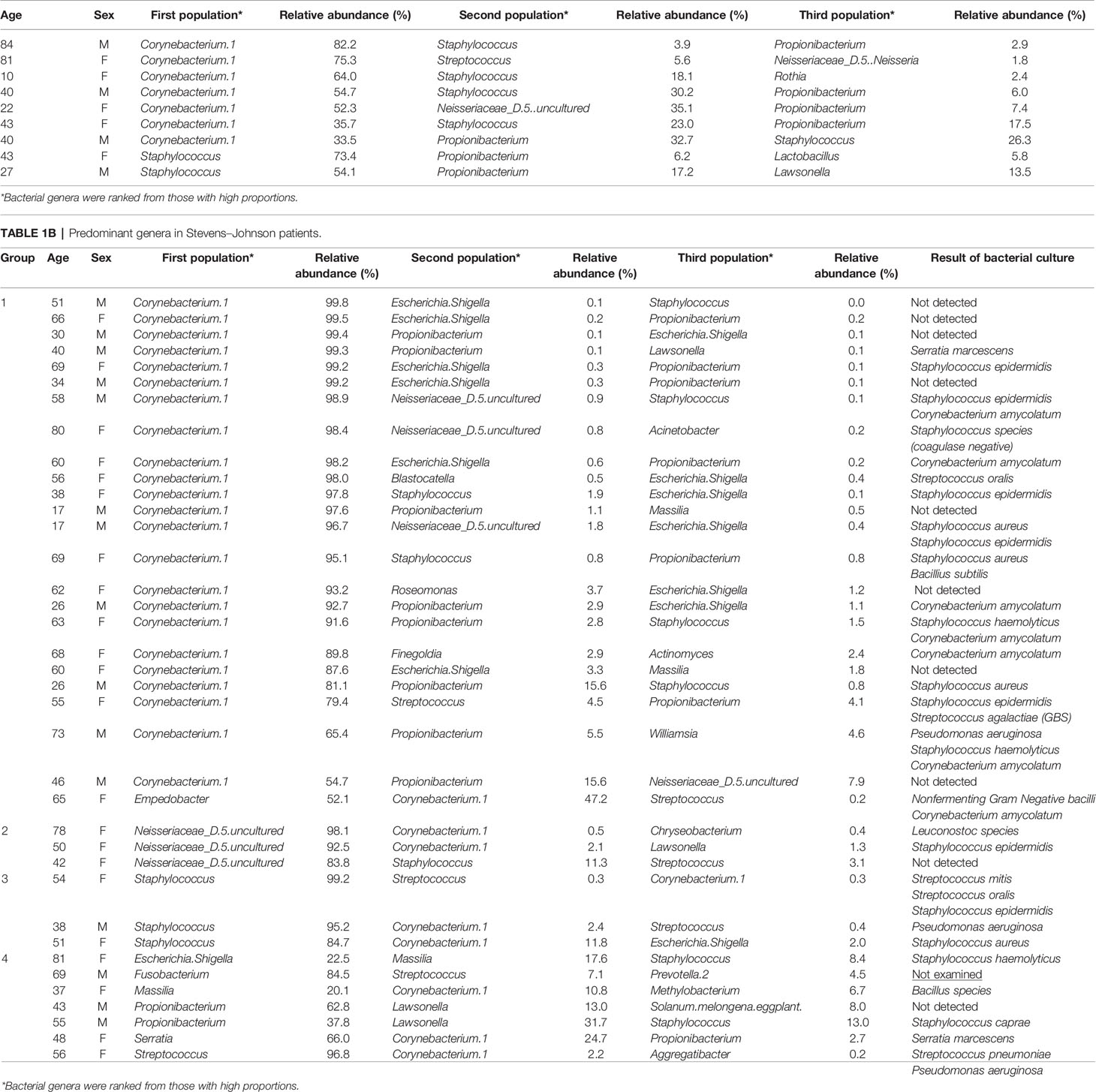 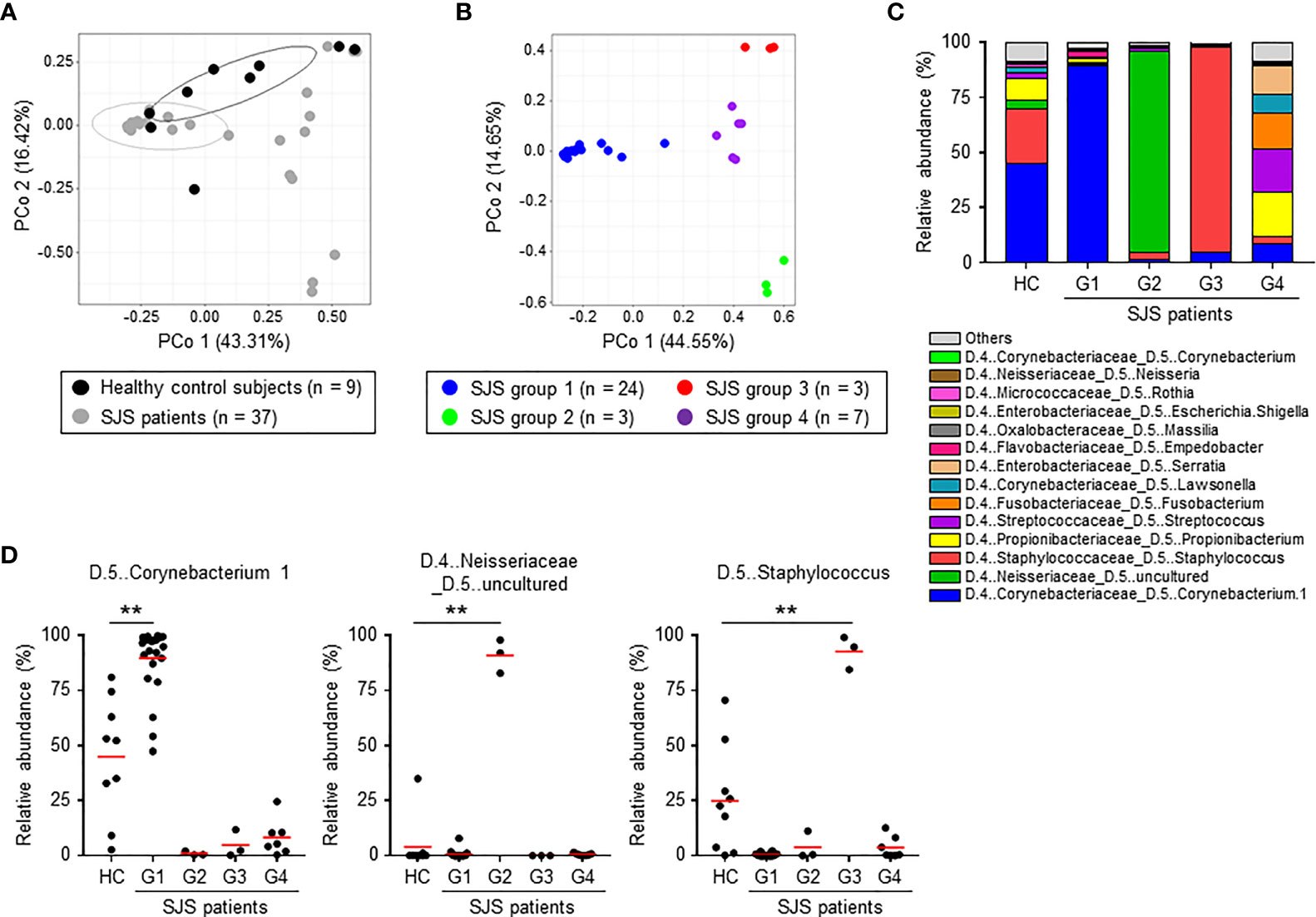 Composition of the Ocular Microbiome in Both Eyes and Over Time

Detection of Corynebacterium, Staphylococcus, and Neisseriaceae in SJS/TEN Patients With SOC by Bacterial Culture Test

Finally, to validate our 16S rRNA-based genetic analysis, we performed bacterial culture test used widely in clinical practice in 36 SJS/TEN patients with SOC. Potential bacterial pathogens such as Staphylococcus, Corynebacterium, Streptococcus, Serratia, Pseudomonas, Leuconostoc, Bacillus were isolated from 26 patients but not from 10 patients (Table 1B). Staphylococcus was most frequently detected in 15 of 36 patients (41.7%), followed by Corynebacterium in 7 of 36 patients (19.4%), and Neisseriaceae was not (Table 1B). Thus, the major bacterial species detected by the culture and sequencing methods are almost the same, demonstrating the validity of our 16S rRNA-based genetic analysis. In addition, these results revealed differences by methods in the frequency of detection and the culture method may fail to detect the presence of non-culturable bacteria such as Neisseriaceae.

When we examined the ocular microbiome in SJS/TEN patients with SOC, although it may be due to the fact that the patients are receiving antibiotics, we found that its composition differed compared with that in HC subjects. In addition, we were able to divide the SJS/TEN patients with SOC into four groups by the predominant genus or genera in the ocular microbiome: Corynebacterium 1 (group 1); Neisseriaceae uncultured (group 2); Staphylococcus (group 3); or Propionibacterium, Streptococcus, Fusobacterium, Lawsonella, and Serratia (group 4). We found that there are multiple patterns of commensal bacteria on the ocular surface of SJS/TEN with SOC and also all groups included the patients with similarly varying severity of ocular sequelae, from mild to severe, suggesting that ocular microbiota might not correlate with severity of ocular sequelae. Therefore, it would be important to examine other eye conditions related to the severity. Accumulating evidence from studies on intestinal bacteria have shown that specific bacteria induced specific immune responses and consequently controlled inflammatory state (Garrett, 2020), raising a possibility that differences in bacterial compositions regulate inflammation in the eye. Alternatively, it is known that host immunity regulates the bacterial composition. Therefore, it remains unclear currently whether microorganisms are involved in the pathogenesis process or are a consequence of disease. In addition, at present, treatment methods according to the ocular microbiota are difficult to determine, which is a subject of our future study.

Corynebacterium, except for diphtheria-causing species C. diphtheriae, are dominant members of the skin microbiota and associated with opportunistic infection and the development of inflammatory skin diseases (Byrd et al., 2018; Olejniczak-Staruch et al., 2021). For example, under steady-state conditions in mice, C. accolens does not cause inflammation; however, when this steady state is disrupted, C. accolens promotes inflammation via a bacterial cell wall component in an interleukin 23–dependent manner (Ridaura et al., 2018). Similarly, on the ocular surface, Corynebacterium species are commonly found in both healthy individuals and individuals with inflammatory ophthalmic conditions such as keratitis and conjunctivitis (Aoki et al., 2021). Indeed, C. accolens and C. amycolatum have been isolated from ocular samples obtained from patients with bacterial conjunctivitis and corneal ulcer, respectively (Eguchi et al., 2008; Sugumaran et al., 2020). Staphylococcus species such as S. epidermidis and S. aureus are well-known skin colonizers that are also associated with inflammatory skin diseases such as atopic dermatitis in humans (Kong et al., 2012; Nakamizo et al., 2015; Byrd et al., 2018). In addition, these species have been shown in a murine atopic dermatitis model to be factors that drive inflammation (Kobayashi et al., 2015). Furthermore, Staphylococcus species are frequently isolated from ocular samples and are recognized as causative factors of inflammatory ophthalmic diseases such as keratitis and conjunctivitis (Somerville et al., 2020). Thus, in ocular tissue and the surrounding skin, Corynebacterium and Staphylococcus species exist as commensals that have the potential to induce inflammation. Neisseriaceae species are also associated with skin inflammation and ocular infection (Teweldemedhin et al., 2017; Hsu et al., 2020), although there is a lack of genomic database information.

The present findings suggest that species in these genera could be pathogens related to SJS/TEN patients with SOC. In addition, it would be important to compare with other ocular surface disorders, and the exploration of factors among each subgroup is required for further studies.

Mucosae usually do not respond to commensal bacteria; however, the ocular surface in SJS/TEN patients with SOC with abnormal mucosal innate immunity might respond to commensal bacteria (Ueta and Kinoshita, 2012). Previously, we have suggested that abnormal mucosal innate immunity might contribute to ocular surface inflammation in SJS/TEN patients with SOC (Ueta and Kinoshita, 2012).

The studies involving human participants were reviewed and approved by the National Institutes of Biomedical Innovation, Health, and Nutrition Kyoto Prefectural University of Medicine. Written informed consent to participate in this study was provided by the participants’ legal guardian/next of kin.

MU, KH, and JK designed the study and wrote the manuscript. MU, CS, and SK collected the human samples. MU, CS, SK, and KH performed the microbiome analysis. JP and KM performed the bioinformatics analysis. All authors contributed to the article and approved the submitted version.

The Supplementary Material for this article can be found online at: https://www.frontiersin.org/articles/10.3389/fcimb.2021.741654/full#supplementary-material

Supplementary Figure 1 | Classification of SJS patients into four groups based on the composition of the ocular microbiome at the genus level by hierarchical clustering analysis. SJS, SJS/TEN patients with SOC.

Copyright © 2021 Ueta, Hosomi, Park, Mizuguchi, Sotozono, Kinoshita and Kunisawa. This is an open-access article distributed under the terms of the Creative Commons Attribution License (CC BY). The use, distribution or reproduction in other forums is permitted, provided the original author(s) and the copyright owner(s) are credited and that the original publication in this journal is cited, in accordance with accepted academic practice. No use, distribution or reproduction is permitted which does not comply with these terms.

Next-Generation Sequencing in Ophthalmology: The Microbiome in Ocular Health and Disease