A plastic crystal, solid electrolyte was prepared by mixing tetrabutylammonium hexafluorophosphate salt, (C4H9)4-NPF6, (10 molar %) with succinonitrile, SCN, (N≡C−CH2−CH2−C≡N), [SCN-10%TBA-PF6]. The resultant waxy material shows a plastic crystalline phase that extends from −36°C up to its melting at 23°C. It shows a high ionic conductivity reaching 4 × 10-5 S/cm in the plastic crystal phase (15°C) and ~ 3 × 10-3 S/cm in the molten state (25°C). These properties along with the high electrochemical stability rendered the use of this material as an electrolyte in an electrochemical double-layer capacitor (EDLC). The EDLC was assembled, and its performance was tested by cyclic voltammetry, AC impedance spectroscopy, and galvanostatic charge–discharge methods. Specific capacitance values in the range of 4–7 F/g (of electrode active material) were obtained in the plastic crystal phase at 15°C, that although compare well with those reported for some polymer electrolytes, can be still enhanced with further development of the device and its components, and only demonstrate their great potential use for capacitors as a new application.

Plastic crystal electrolytes are a new class of materials that attracted a lot of attention due to their ability to deliver liquid-like conductivity within a flexible matrix and therefore can be utilized as solid electrolytes in many electrochemical and photo-electrochemical applications (Angell, 1991; MacFarlane et al., 1999; Alarco et al., 2003). The plastic crystal phase has been recognized and given the name by Timmermans who also suggested that this metastable phase is exhibited by globular (spherical) molecules or planar molecules that become globular on rotating around their main axis (Timmermans, 1961). It is believed that besides conventional defects in the crystal lattice, the structural disorder originated from the rotation and/or disorientation of the individual molecules around their axis of rotation while mostly retained in their lattice sites are responsible for the observed high plasticity and diffusivity in this type of materials (Forsyth et al., 2000).

In the last two decades, the field has witnessed two major milestones. The first is the recognition of the plastic crystalline behavior in aliphatic or heterocyclic organic salts and the possibility of their doping with low levels of foreign salts (MacFarlane et al., 1999). The second is the finding that the non-ionic plastic crystal molecular succinonitrile can be doped with a large variety of salts to give plastic crystal electrolytes with room temperature conductivities above 1 mS/cm (Long et al., 2003; Alarco et al., 2004a). In this regard, succinonitrile can be thought of as a solid solvent considering its high dielectric constant (55 at 25°C) and the Gutmann donor number of 15 of its nitrile groups.

An EDLC is a device that stores energy in the double layer at the electrode/electrolyte interface (Beguin and Frackowiak, 2013). Liquid electrolytes, salts of carbonate (propylene carbonate PC) or nitrile solvents (acetonitrile ACN), or ionic-liquid electrolytes (Armand et al., 2009) were used. However, due to the associated problems of corrosion, flammability, and volatility, solid electrolytes like polymer (gel) electrolytes, formed by liquid or ionic-liquid electrolytes immobilized in a polymer matrix, were alternatively sought to overcome those shortcomings (Matsuda et al., 1998; Lewandowski et al., 2001; Pandey and Hashmi, 2013). The electrodes are usually high surface area carbons with optimized porosity, such as activated carbon (Simon and Gogotsi, 2008), but recent work is based on carbons with exquisite structures and morphologies, such as graphene and carbon nanotubes (Pumera, 2011; Kumar et al., 2012). Improved energy and power densities along with excellent cycle numbers have been obtained.

In this work, we have prepared a new solid-state electrolyte based on the neutral plastic crystalline phase of succinonitrile doped with an organic salt, which was then employed in an EDLC with two activated carbon electrodes (1,500 m2/g). We report preliminary results on the thermal and electrochemical properties of the electrolyte and its performance in an EDLC in the plastic crystal and the molten state as evaluated using different electrochemical methods.

The electrolyte was prepared by adding the appropriate amount of the tetrabutylammonium hexafluorophosphate, TBA-PF6, salt obtained from Fluka into molten succinonitrile, SCN, obtained from Aldrich at 60°C, and the mixture was stirred until it became homogeneous and then allowed to cool down to room temperature.

An EDLC was assembled using activated carbon with a specific surface area of 1,500 m2/g and an average particle size of 15 nm. The current collector was cut from 2 cm × 2 cm piece of Ni-foam. The active carbon (80 wt.%) was mixed with graphite (10 wt.%), and a binder (10 wt.%) from a PTFE aqueous solution. The resulting mixture was ground to obtain a uniform paste and was cast on the nickel foam substrate. The electrodes were then dried under vacuum at 100°C for 2 h.

Cell performance was evaluated by galvanostatic and cyclic voltammetry experiments carried out on a Princeton Applied Research potentiostat/galvanostat (model 273A). AC impedance measurements were conducted using a Solartron 1260 Impedance Analyzer in the frequency range of 100 KHz to 1 mHz. For ionic conductivity measurements of the electrolyte, a two-platinum-electrode conductivity cell with a cell constant of 1 was used in a glove box and the resistance was measured using AC impedance spectroscopy.

Differential scanning calorimetric analysis was performed under a nitrogen atmosphere (50 mL/min) using a TA Instruments DSC 2920. All the samples were sealed in aluminum pans in a dry box and then scanned from -100 to 150°C at 10°C min−1.

Succinonitrile, already a waxy solid material, was melted at 60°C, and the TBA-PF6 salt was added. After cooling to room temperature, the obtained material was free standing but waxy and very soft as shown in the inset of Figure 1. 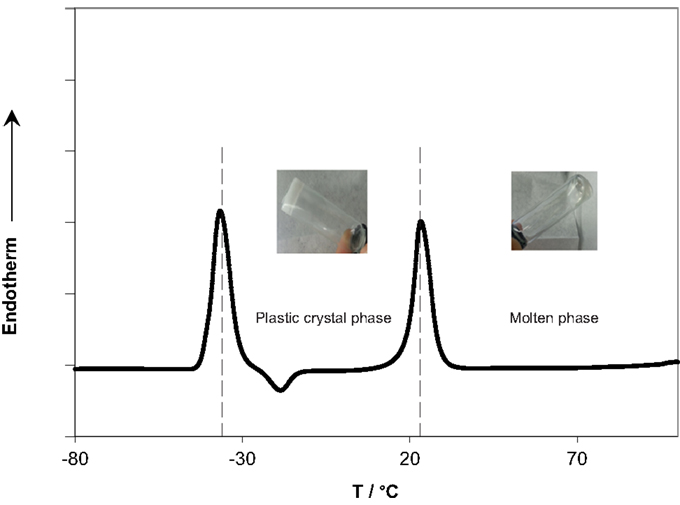 Figure 1. DSC scan and optical images (inset) of the of the SCN-10%TBA-PF6 electrolyte.

Figure 1 also shows the DSC scan of the prepared SCN-10%TBA-PF6 electrolyte, which exhibited a characteristic endothermic peak at −36°C corresponding to the normal (rigid) crystal-to-plastic crystal transition (Tpc), preceding the peak of melting at 23°C. Qualitatively speaking, the ratio of the area of the two peaks is close to one indicating a moderate disorder compared to other plastic crystal electrolytes. However, a more in-depth analysis of the thermodynamic data of the two transitions is required to get more insight into the microscopic behavior of the electrolyte. The scan shows that the electrolyte has a very wide plastic crystal range extending over ~60°C. This range although shorter than that of the pure SCN (97°C) and its electrolytes (60–80°C) (Alarco et al., 2004a), it, along with the high thermal stability of the molten state, covers the practical temperature range for most energy conversion and storage devices (−30°C to 60°C). 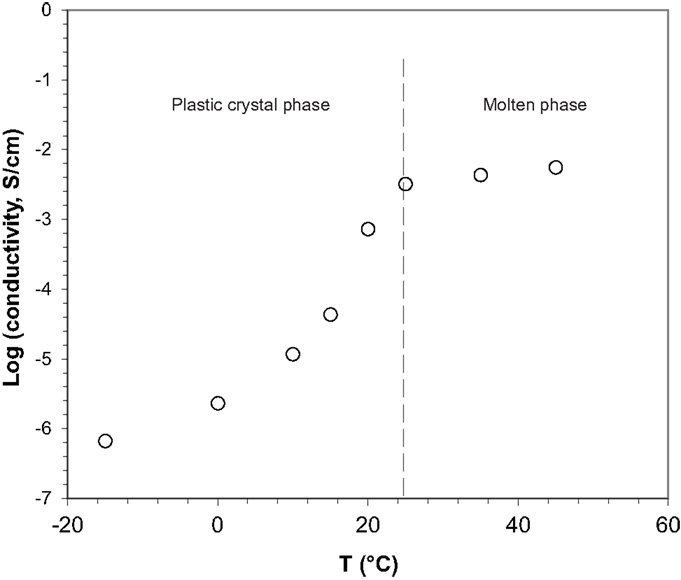 The electrochemical stability window of succinonitrile-based electrolytes have been previously reported by some of the authors (Alarco et al., 2004a) and was found to extend over 5.5 V in the case of lithium salts (SCN-5%LiTFI). Herein, we have measured the electrochemical stability of the SCN-10%TBA-PF6 electrolyte by linear sweep voltammetry at 25°C, not shown here, and it showed no redox activity within the potential range from −1 to 1 V.

An EDLC was assembled using SCN-10% TBA-PF6 as an electrolyte and two carbon electrodes and cyclic voltammograms were measured between 0 and 1 V at different scan rates between 5 and 200 mV/s at two temperatures (15 and 25°C), and the scans are shown in Figure 3. All the scans showed the well-reported, characteristic, rectangular shape generally observed for capacitors, that, however, became distorted as the scan rate was increased indicating a resistive behavior. 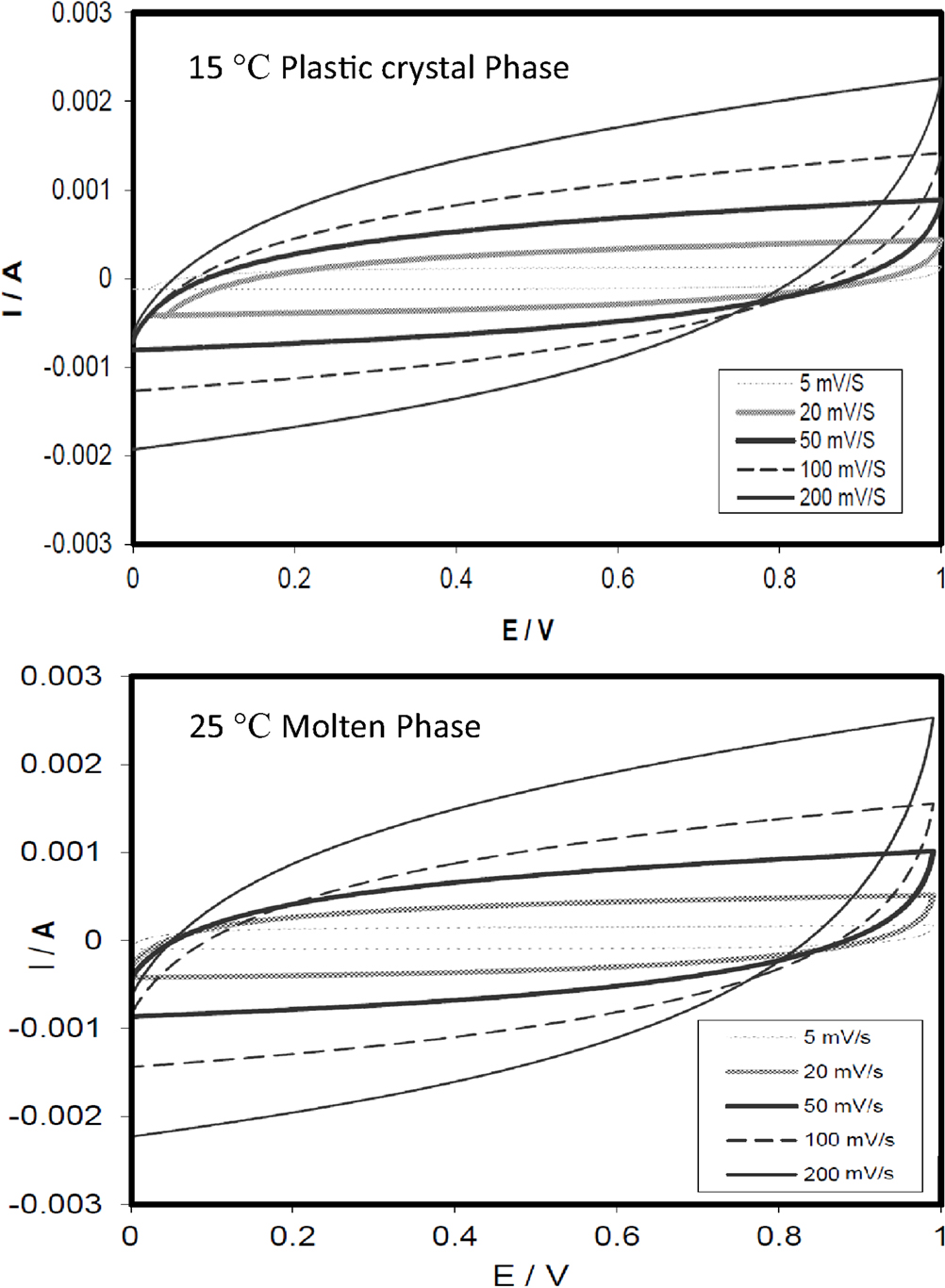 Figure 3. Cyclic voltammograms at different scan rates for the EDLC utilizing the SCN-10%TBA-PF6 in the plastic phase (15°C) and the molten state (25°C).

The specific capacitances of the device were calculated from the voltammograms and found to be, as expected, inversely dependent on the scan rate. At a slow scan rate of 5 mV/s, the specific capacitance increased from 7.1 F/g (of active electrode material) in the plastic phase to 8.0 F/g, when the electrolyte was in the molten state at 25°C. The slight increase can be attributed to enhanced kinetics due to higher conductivity of the electrolyte and also to better penetration of the molten electrolyte into the porous structure of the carbon electrodes.

The AC impedance spectra of the device were also recorded at 15 and 25°C and are shown in Figure 4. It shows a semicircle in the high frequency region followed by an inclined line, indicative of a capacitive behavior, at lower frequencies. The cell resistance calculated from the intercept of the higher-end of the semicircle with the real axis was found to be ~17 Ω at both temperatures. The specific capacitance of the device was calculated at 0.01 Hz and found to be 6.6 F/g in the plastic phase and 6.0 F/g in the molten state. 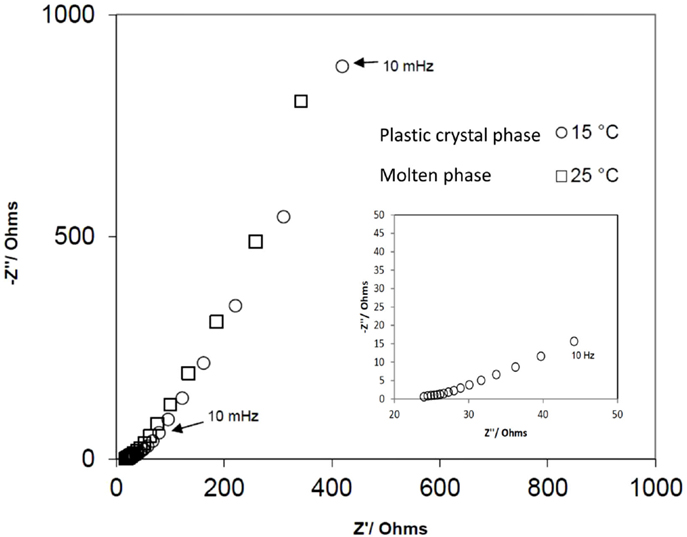 Figure 4. AC impedance spectra of the EDLC utilizing the SCN-10%TBA-PF6 in the plastic phase (15°C) and the molten state (25°C). Inset shows the high frequency region for the plastic phase.

Figure 5 shows the galvanostatic charge/discharge curve of the device between 0 and 1 V and at 1 mA/cm2. The device showed a typical, curved charge/almost-linear discharge profile with negligible IR drop at the potential switching point. The specific capacitance of the device was also calculated from the curves and gave comparable values to those obtained from the impedance spectroscopy method reaching 4.1 F/g in the plastic phase and 5.2 F/g in the molten state. 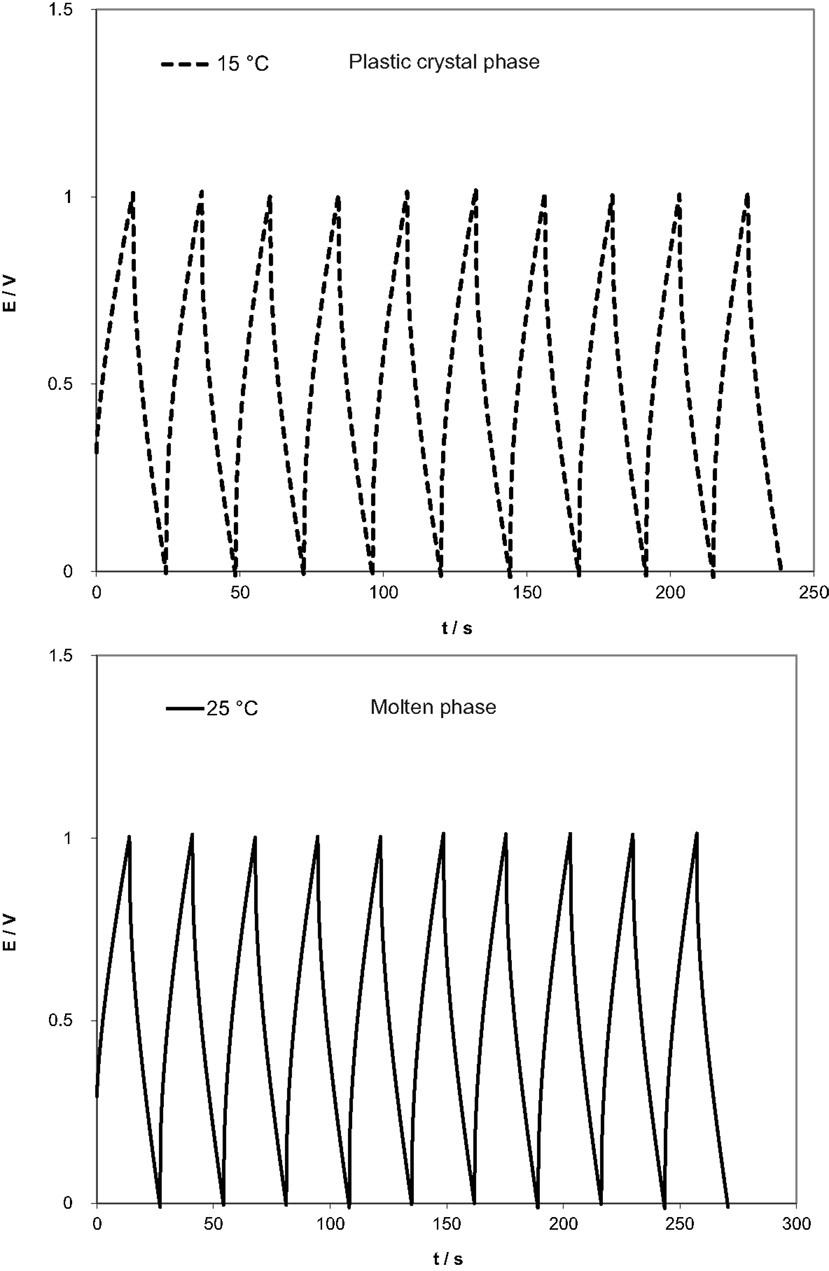 Figure 5. Charge–discharge curves at 1 mA for the EDLC utilizing the SCN-10%TBA-PF6 electrolyte in the plastic phase (15°C) and the molten state (25°C).

Table 1 summarizes the specific capacitance values obtained by three methods. The values are comparable, although cyclic voltammetry gave slightly higher values than the other two methods. In the plastic crystal phase, the specific capacitance is in the range of 4–7 F/g while in the molten state is in the range of 5–13 F/g. The values are much lower than what is typically reported for EDLC devices using activated carbon electrodes and liquid electrolytes, but they compare well with those reported for polymer electrolytes. For example, when a Nafion membrane was used, a specific capacitance of 13.2 F/g was obtained, while when a polymer gel electrolyte of poly(ethyleneoxide) or poly(vinyl alcohol) with KOH was used, 9 F/g was reported (Staiti et al., 2002; Kalpana et al., 2006). Also, when nanocomposite polymer electrolyte was used with activated carbon, 5–20 F/g was obtained (Mohan et al., 2014a,b). However, the specific capacitance values are lower than what is reported by Singh et al. for polymer composite with plastic crystal electrolyte and Taniki et al. for a neat ionic plastic crystal salt (Taniki et al., 2014; Singh et al., 2015). This is mainly due to the use of graphene nano-platelets as electrodes rather than activated carbon in the case of the former and possibly the high number of charge carrier and the use of high voltage in the case of the latter.

Table 1. Specific capacitance values of the EDLC utilizing the SCN-10%TBA-PF6 electrolyte in the plastic phase (15°C) and the molten state (25°C).

To summarize, in our case, we did not use any polymer matrix to improve the mechanical properties of our electrolyte, and the use of a neutral instead of an ionic plastic crystal enables the optimization of salt concentration (number of charge carriers) in the electrolyte. In this regard, the prepared plastic electrolyte based on succinonitrile and the ammonium salt is an attempt to demonstrate the full potential of a plastic crystal electrolyte for use in EDLC application and we believe that with further optimization and the use of other salts, their energy/power densities and cycle number can be maximized.

Copyright: © 2015 Abouimrane, Belharouak and Abu-Lebdeh. This is an open-access article distributed under the terms of the Creative Commons Attribution License (CC BY). The use, distribution or reproduction in other forums is permitted, provided the original author(s) or licensor are credited and that the original publication in this journal is cited, in accordance with accepted academic practice. No use, distribution or reproduction is permitted which does not comply with these terms.