Research Institute of Innovative Technology for the Earth, Japan

Analysis of the Polypropylene-Based Aluminium-Air Battery

Rapid growth of the world economy has led to an increase in energy demand in daily lives and industries. It is projected that the world energy consumption will grow by 50% between 2018 to 2050, particularly in the Asiatic region. On the other hand, global energy-related CO2 emissions will grow by 0.6% per year from 2018 to 2050. As a result, human-induced climate change is also increasing steadily. Hence, renewable energy sources are being explored to minimize the burning of fossil fuel and creation of environmental pollution. One of the alternative solutions is using electrochemical energy storage systems to replace conventional internal combustion engines to generate electricity for vehicles. There are several advantages associated with electrochemical energy storage systems on fuel-cell-powered vehicles, such as reductions in harmful emissions, less noise pollution, and reduced dependence on fossil fuels (Clark et al., 2018).

The primary energy source of Electrical Vehicles (EVs) is electrochemical energy storage systems such as lead-acid battery, Li-ion battery, NiCd, and NiMH. Among the various batteries used in EVs, the Li-ion battery with its high energy density (7,900 Wh/L) and power density (3,460 Wh/kg) is a popular choice (Clark et al., 2018). Apart from that, Li-ion battery has a longer cycle life and depth of discharge as compared to other types of energy storage systems (Abdin and Khalilpour, 2018). However, the Li-ion battery is very sensitive to operating temperatures and prone to thermal runaway (Tan et al., 2011). On the other hand, EVs equipped with a rechargeable battery will require the construction of a new charging facility. Fast charging of the electric vehicle during peak hours will certainly increase the electric load of the existing electricity networks. In addition, disposal of used Li-ion batteries is also one of the issues that remains unsolved. Hence, research on the energy storage system has been conducted to search for an alternative solution to replace the Li-ion battery; one of the potential solutions is using a metal-air battery.

Metal-air batteries with high energy density are projected as one of the clean energy solutions for the post-Li-ion battery era (Li and Lu, 2017). The operating principle of the metal-air batteries is very simple; the electrochemical reaction occurs when the battery consumes oxygen from the air at the cathode and forms hydroxide ion. At the anode, the metal being oxidized to metal oxide generates the electricity. There are various types of metal electrodes being used, such as zinc, aluminium, magnesium, iron, lithium (Xiang et al., 2020), and sodium (Jiang et al., 2018). Among various types of metal, aluminium is considered to be an attractive candidate because of its unique characteristics such as high specific energy, high conversion rate, low operating cost, good stealth performance, and it being environmentally friendly (Liu et al., 2017). Moreover, aluminium is the most abundant metal element in the world, and it is easy to handle, transport, and recycle through industrial treatment. Aluminium-air battery has the highest theoretical voltage and energy density among various types of batteries, which were recorded at 2.7 V and 8,100 Wh kg−1, respectively (Nestoridi et al., 2008; Schwarz, 2014). However, there are several drawbacks associated with the aluminium-air battery, such as the need to mechanically recharge the battery by replacing the aluminium. Additionally, parasitic corrosion of the anode will further affect the performance of the batteries (Zhang et al., 2018).

The anode and cathode of the battery are usually separated by a porous separator which is one of the key elements in determining the effectiveness of the battery. The separator separates the anode and cathode to prevent short circuiting and allows the crossing of ions to the other side. The commonly used separators are produced from a polymer, such as olefin which has a low melting point. However, this type of thermally unstable separator could suffer thermal shrinkage when the operating temperature exceeds the melting point, which would further lead to thermal runaway and safety issues of the battery (Song et al., 2019). Therefore, the separator of the battery should have a good porosity property but not affect the thermal stability and mechanical strength at a certain level (Moon et al., 2019). To satisfy these requirements, a cellulose-based separator was introduced for the aluminium-air battery (Pan et al., 2018; Pan et al., 2019b). Pan et al. (2019a) studied the double-sided conductive separator using carbon nanotubes and cellulose nano-fiber composite layers coated with fiberglass. From the experiment, a more stable and longer cycle life has been observed due to the decrease in the local current density provided by the porous and conductive layer. It can be concluded that the double-sided conductive separator can be used for the aluminium-air battery and promote the development of the aluminium-air battery. However, the cellulose-based separator may face several drawbacks, such as swelling when immersed in an electrolyte causing strength weakening and a change of material properties as compared with polymer separators. Xie et al. (2019) investigated the tensile properties of a cellulose separator under the electrolyte-immersed condition and discovered that Young’s modulus of the separator is reduced and the expansion coefficient is increased. This further proved that the strength of the separator is weakening and swelling occurs in electrolyte-immersed conditions (Xie et al., 2019). Although the mechanical properties of the cellulose separator deteriorated in aqueous electrolyte, the swelling of cellulose separators will improve the performance of the separators as well as the electrochemical properties. Hence, the issues of strength weakening need to be overcome to produce a battery with longer life cycles.

The design of the polypropylene-based aluminium-air battery is illustrated in Figure 1. The battery reaction area is about 5 cm × 5 cm. The battery consists of four major parts: two acrylic plates used as the enclosure of the aluminium-air battery, an anode which is made of aluminium foil (98.2% Al and 0.01 mm thick), an air cathode which is made of carbon fiber cloth (0.167 mm), and the separator of the battery which is made of a polypropylene absorbent pad (100% Polypropylene, 2 mm thick, Crisben). An acrylic-based material is chosen as the enclosure of the battery due to its inert properties that do not affect the reaction of the aluminium-air battery. An air-breathing window of 5 cm × 5 cm was cut on the air cathode side of the enclosure to facilitate oxygen transport. Wire mesh was cut into the desired size to provide support for the air cathode and ensure tight contact of the air cathode with the separator. Potassium hydroxide (KOH) was used as the electrolyte in this study with concentrations varying from 1 to 3 M. The electrolyte is prepared by dissolving the KOH pellet into deionized water and 1.5 ml of KOH solution is injected into the polypropylene separator. The aluminium foil was also cut into the reaction area of 5 cm × 5 cm and inserted into the enclosure. The advantages of this type of battery are its low-cost and simple fabrication process. Moreover, the parasitic reaction at the anode can be controlled by limiting the amount of electrolytes present in the battery and does not require a bulky electrolyte recirculation system. 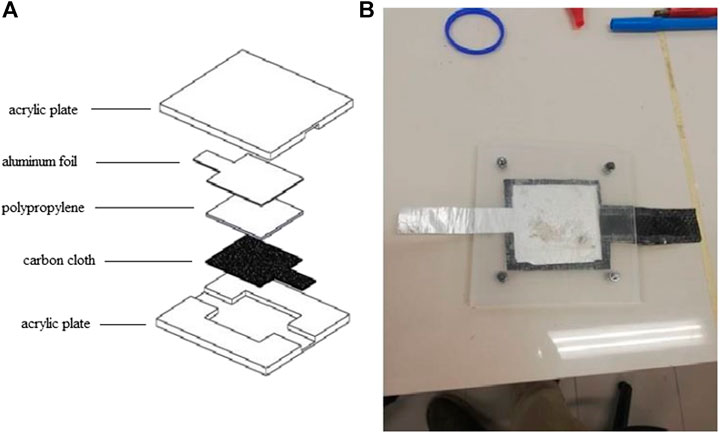 Next, Kimwipes was used to replace polypropylene as the separator. The performance of the paper-based aluminium-air battery was recorded and compared with a polypropylene-based aluminium-air battery. All tests were repeated three times to obtain an average value. All the tests were conducted under room temperature of 25°C. After the cyclic performance test, the battery was disassembled to measure the weight loss of the aluminium anode. Then, scanning electron microscope was used to observe the surface morphologies of the anode and separator before and after the experiment. In addition, X-Ray diffraction analysis was also conducted; the scan range was set from 10 to 90 degrees with a scan speed of 2 degrees per minute. The XRD patterns were then interpreted using X’Pert HighScore Plus. 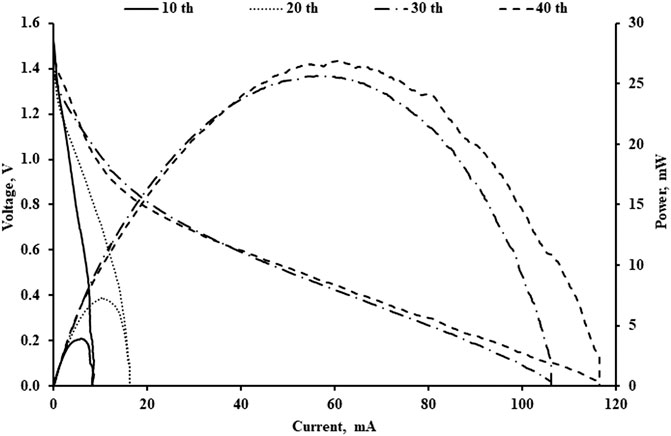 Battery Performance Under the 1 M of KOH 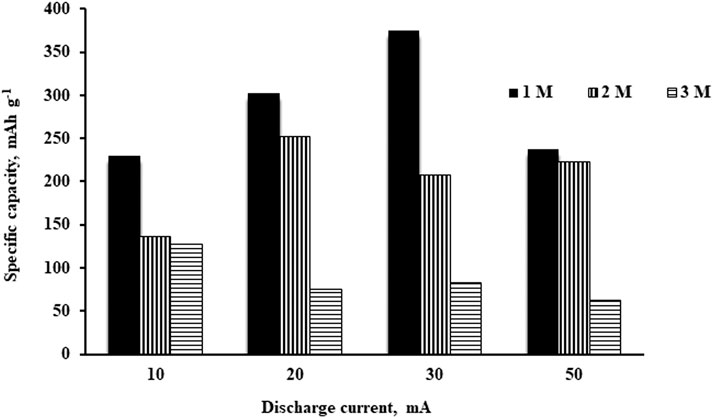 Performance of Polypropylene Against a Paper-Based Separator 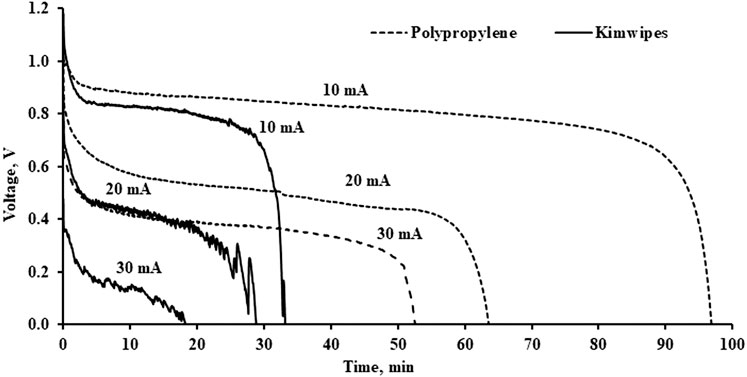 FIGURE 7. Discharge performance of polypropylene against kim wipes as the separator.

Besides that, the polypropylene separator did not suffer a severe sharp drop in voltage as compared to kimwipes for all discharge currents. The sharp drop in the initial voltage of the kimwipes separator will produce a lower discharge voltage. The effects of fluctuation in voltage and the large drop in initial voltage suggested that kimwipes does not provide a stable electrical performance. This may be due to the higher internal resistance of the paper-based separator. A polypropylene separator can provide a stable discharge performance for a longer period of time. Although kimwipes possess a better chemical absorbent property than the polypropylene, it does not show a good performance when used as a separator in aluminium-air battery. This may be due to the physical microstructure of the Kimwipes. Kimwipes is a cellulose-based material while polypropylene is a fiber-based material. When a cellulose-based material is used as a separator in the battery, it can cause swelling when immersed in the electrolyte. This will alter the material properties of the separator. Nevertheless, the geometry of the fiber-based polypropylene does not distort when it is immersed in the electrolyte. Hence, the polypropylene separator will produce a better battery performance. This observation agrees with the work by Xie et al. (2019).

Weight of the Aluminium Foil

FIGURE 8. Images of aluminum anode after more than 2 hours of discharging with 1 M (A), 2M (B), and 3M (C) of KOH concentration respectively. 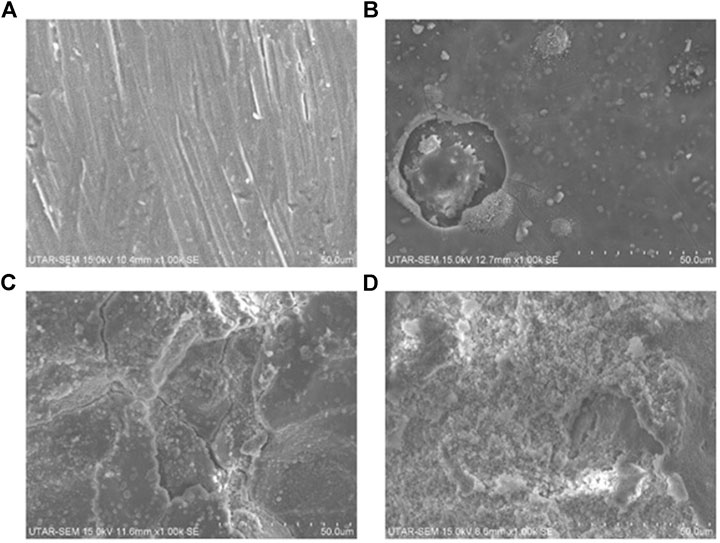 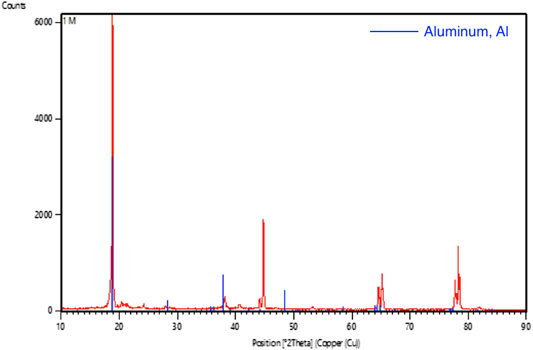 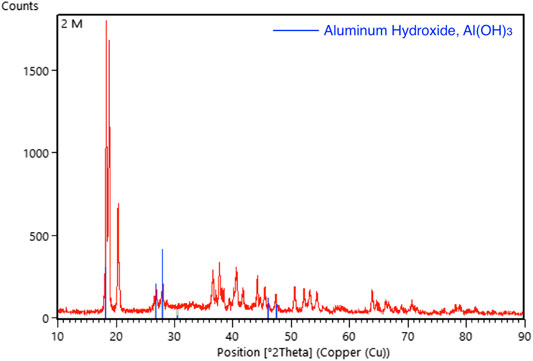 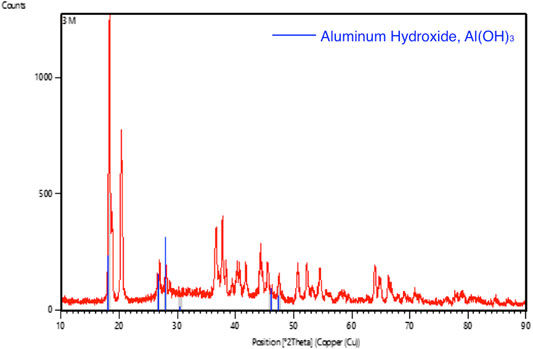 This work is supported by Fundamental Research Grant Scheme (Grant No. FRGS/1/2018/TK07/UTAR/02/4) from Ministry of Higher Education Malaysia and University Malaya RU grant (Grant No. ST024-2019).

We would like to thank Nor Haziq Naquiddin for their help in testing some of the battery performances.

Copyright © 2021 Tan, Saw, Yew, Sun, Cai, Chong and Kuo. This is an open-access article distributed under the terms of the Creative Commons Attribution License (CC BY). The use, distribution or reproduction in other forums is permitted, provided the original author(s) and the copyright owner(s) are credited and that the original publication in this journal is cited, in accordance with accepted academic practice. No use, distribution or reproduction is permitted which does not comply with these terms.