Molecular crystals have attracted increasing attention as a candidate for innovative solid electrolytes with solid-state Mg-ion conductivity. In this work, we synthesized a novel Mg-ion-conducting molecular crystal, Mg{N(SO2CF3)2}2(CH3OC5H9)2 (Mg(TFSA)2(CPME)2), composed of Mg bis(trifluoromethanesulfonyl)amide (Mg(TFSA)2) and cyclopentyl methyl ether (CPME) and elucidated its crystal structure. We found that the obtained Mg(TFSA)2(CPME)2 exhibits solid-state ionic conductivity at room temperature and a high Mg-ion transference number of 0.74. Contrastingly, most Mg-conductive inorganic solid electrolytes require heating above 150–300°C to exhibit ionic conductivity. These results further prove the suitability of molecular crystals as candidates for Mg-ion-conducting solid electrolytes.

Therefore, we investigated the development of novel molecular crystalline electrolytes consisting of MgTFSA and an organic molecule, based on our previous work on molecular crystalline electrolytes. Herein, we report the synthesis of a molecular crystal, Mg{N(SO2CF3)2}2(CH3OC5H9)2 (Mg(TFSA)2(CPME)2) with room temperature Mg-ion conductivity resulting from the reaction of magnesium bis(trifluoromethanesulfonyl)amide (Mg(TFSA)2) and cyclopentyl methyl ether (CPME). We also discuss the results of single-crystal X-ray structure analysis, the evaluation of the ionic conductivity, and the Mg-ion transference number for Mg(TFSA)2(CPME)2.

All experiments were carried out under an Ar atmosphere using Schlenk techniques or in an Ar-filled glovebox (MBraun, UNIlab2000). CPME (dehydrated) was purchased from FUJIFILM Wako Pure Chemical Industry Corporation. Mg{N(SO2CF3)2}2 (Mg(TFSA)2) was purchased from Kishida Chemical Co., Ltd. The CPME was used as purchased, without any modifications. Furthermore, Mg(TFSA)2 was dried under reduced pressure at 50°C for 3 days prior to use.

Mg(TFSA)2 (1.005 g, 1.72 mmol) and CPME (0.400 mL, 3.44 mmol) were charged into a 50 mL Schlenk tube and heated until the mixture melted. Subsequently, the reaction flask was cooled to room temperature and stored for 4 days at −30°C to quantitatively obtain Mg(TFSA)2(CPME)2 in the form of colorless single crystals. Although the crystals were highly deliquescent and immediately absorbed water from the air to form a highly viscous liquid, they could be handled stably at room temperature in an Ar atmosphere.

Differential scanning calorimetry (DSC) was performed on a Shimadzu DSC60 instrument operated at a heating rate of 10°C min−1 under a N2 atmosphere, using Al2O3 as the reference material. Infrared (IR) spectra were recorded on a Shimadzu IRSpirit using pellet samples with Mg(TFSA)2(CPME)2 diluted in KBr. Powder X-ray diffraction (XRD) was measured at room temperature on a Rigaku SmartLab diffractometer, using Cu-Kα radiation with a monochromator. The powder sample for XRD was prepared by grinding the crystals of Mg(TFSA)2(CPME)2 in a glovebox. For measurement, the powder sample was placed on a non-reflective silicon plate and covered with Kapton film and tape to prevent the samples from absorbing moisture.

The ionic conductivity of the sample was measured via the AC impedance method using Biologic, VMP3, in the frequency range of 1 Hz to 1 MHz and the temperature range of 10–40°C. The powder samples of Mg(TFSA)2(CPME)2 were pressed into disks in a glovebox and placed between two SUS plates in a closed vessel with a two-electrode cell. The temperature of the samples was controlled in a bench-top-type chamber (Espec, SU-241), and all the cells were equilibrated at the operating temperature for 3 h before commencing measurements. The AC impedance data displayed either a well-defined semicircle and a low-frequency spike, or only a low-frequency spike. The ionic conductivity (σ) was calculated using σ = l/SR, where R is the bulk resistance (Ω), S is the area (cm2) of the Au electrodes, and l is the thickness of the electrolyte material (cm). The bulk resistance was calculated from the touchdown point of the electrolyte on the Re|Z|-axis in a Nyquist plot.

The magnesium transference number (tMg2+) for Mg(TFSA)2(SN)2 was measured using a symmetric cell with Mg electrodes, Mg|Mg(TFSA)2(CPME)2|Mg, at 40°C. The method developed by Vincent et al. was used to calculate the transference number, as follows (Evans et al., 1987): 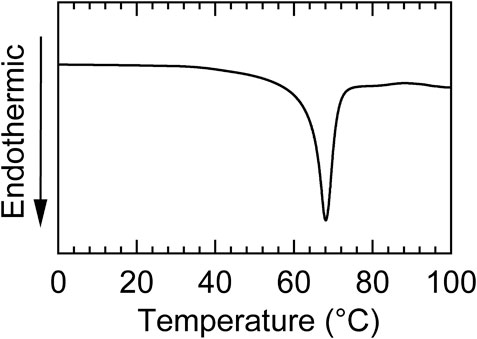 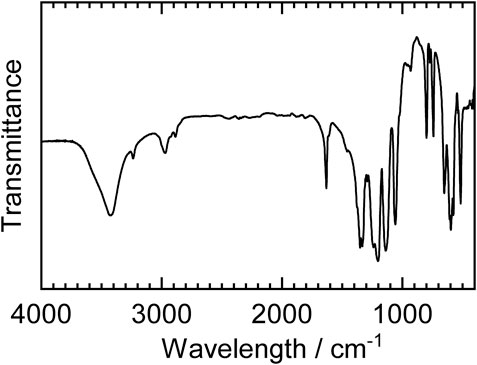 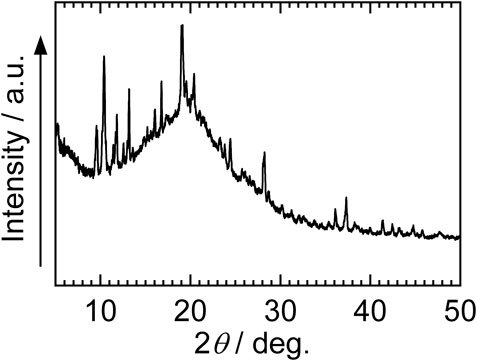 FIGURE 3. Powder XRD pattern of Mg(TFSA)2(CPME)2. (The broad peak observed in the range of 15°–25° is derived from the Kapton film employed to prevent Mg(TFSA)2(CPME)2 from absorbing moisture.).

The crystal structure of Mg(TFSA)2(CPME)2 was revealed by a single-crystal XRD study, as shown in Figure 4. It is evident that Mg(TFSA)2(CPME)2 is formed as a mononuclear Mg complex with a hexa-coordinated octahedral structure. Two molecules of CPME were coordinated to the Mg-ion via the O atom of the ether group. These CPME molecules were located in the cis position to the Mg center, and the cyclopentyl groups in the CPME molecules were located toward the opposite position to avoid steric repulsion. One of the CPME molecules possessed disorder in the cyclopentyl group. The remaining four coordination sites on Mg were occupied by the chelation of two TFSA anions via the O atom of a sulfonyl group. 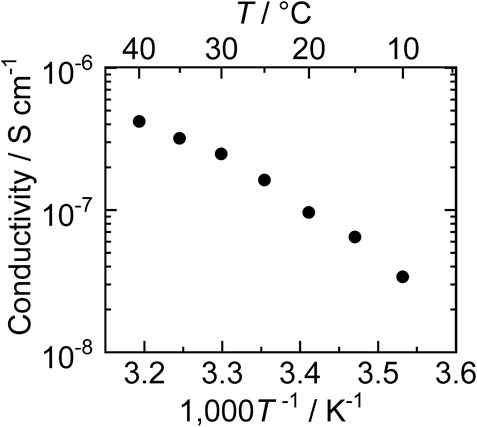 FIGURE 6. Temperature dependence of the ionic conductivity of Mg(TFSA)2(CPME)2.

The Arrhenius plot of Mg(TFSA)2(CPME)2 exhibits linearity, similar to the lithium ion-conducting molecular crystalline electrolytes previously reported by our group. Based on this result, the activation energy for ion conduction through Mg(TFSA)2(CPME)2 was calculated to be 69 kJ mol−1. Interestingly, this activation energy was comparable to the previously reported values for lithium ion-conductive molecular crystals, such as Li(TFSA)(1,2-dimethoxybenzene) (78 kJ mol−1) and Li(TFSA)(1,2-dimethoxybenzene)2 (84 kJ mol−1). Furthermore, the linearity of the Arrhenius plot suggests that the ionic conduction is induced by a hopping mechanism in the crystal lattice similar to the LiTFSA-based molecular crystals.

The Mg-ion transference number (tMg2+) for Mg(TFSA)2(CPME)2 was measured using Mg metal electrodes, following a previously reported method (Evans et al., 1987). The DC polarization and AC impedance measurements on the cell Mg | Mg(TFSA)2(CPME)2 | Mg are shown in Figure 7. Based on these results, the value of the tMg2+ was estimated to be 0.74. The tMg2+ value of Mg(TFSA)2(CPME)2 is considerably higher than the reported value of polymer-based Mg-ion conductive electrolytes. For example, the tMg2+ of polyethylene oxide (PEO) containing Mg(CF3SO3)2 salt and 1-ethyl-3-methylimidazolium tetrafluoroborate ionic liquid has been reported to be 0.22 (Maheshwaran et al., 2020). The high tMg2+ value and linearity of the Arrhenius plots obtained during conductivity measurements strongly suggest that Mg-ion conduction preferentially takes place via a hopping mechanism in the crystal lattices of Mg(TFSA)2(CPME)2. 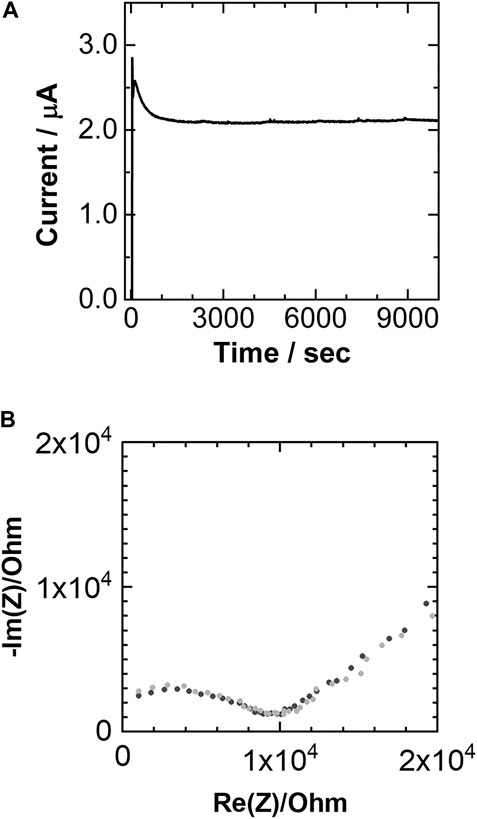 In this study, we successfully developed a novel molecular crystalline electrolyte, Mg(TFSA)2(CPME)2, with Mg-ion conductivity at room temperature using Mg(TFSA)2 salt and CPME. Single-crystal X-ray structure analysis revealed that the molecular crystal Mg(TFSA)2(CPME)2 displays ordered arrangements of Mg-ions in the crystal lattice, corresponding to the ionic conduction paths. We confirmed that the fabricated electrolyte exhibits a room-temperature ionic conductivity of 10–7 S cm−1 and a high Mg-ion transference number of 0.74 in the crystalline state through electrochemical measurements. These results demonstrate the considerable potential of molecular crystals for application as solid electrolytes in rechargeable Mg batteries.

The datasets presented in this study can be found in online repositories. The names of the repository/repositories and accession number(s) can be found below: CCDC 2049209 contains the supplementary crystallographic data for this paper. These data can be obtained free of charge via http://www.ccdc.cam.ac.uk/conts/retrieving.html.

TO, SU, and MM designed the experiments and wrote the paper. TO and SU synthesized the electrolyte and evaluated the thermal behavior and Mg-ion conductive properties. KT performed IR and XRD measurements. MM performed the crystal structural analysis.

Copyright © 2021 Ota, Uchiyama, Tsukada and Moriya. This is an open-access article distributed under the terms of the Creative Commons Attribution License (CC BY). The use, distribution or reproduction in other forums is permitted, provided the original author(s) and the copyright owner(s) are credited and that the original publication in this journal is cited, in accordance with accepted academic practice. No use, distribution or reproduction is permitted which does not comply with these terms.