With the increase in vehicle exhaust gas emission regulations and energy saving requirements, energy recovery technologies are required to improve fuel efficiency. In the conventional internal combustion engine vehicle, approximately 40% of energy is lost through the waste exhaust gases (Orr et al., 2016). So there are many energy recovery technologies which are used for vehicle exhaust waste recovery, such as waste heat recovery air conditioners, phase change energy storage technology, etc. Among them, TEG technology which can transform the exhaust heat directly into electricity is used for the vehicle (Mohamed, 2019). In addition, the hybrid vehicles also have the internal combustion engine and stable operating status. So the thermoelectric generation technology can be used to supply the electric energy for the power battery (Kim et al., 2011).

The TEG technology which is based on the Seebeck effect was discovered by Thomas Johann Seebeck in 1821 (Riffat and Ma, 2003). For analyzing the performance of the single TEG, theoretical modeling is used to analyze the power generation efficiency. In this modeling, the TEG maximum power,, is given by the following:

The metal-fin heat sink is one of the main ways of enhancing heat transfer. It has a lot of structural changes as the heat sinks in the cold side or the hot side. In the hot side heating, Jang et al. (2013) used the heat sink with a typical sheet fin to transfer the heat from the flue gas in the chimney. They analyzed the performance of different sizes of the sheet fin. Weng and Huang. (2013) made the hexagonal pipe and the circular exhaust pipe coupled with radial fins the hot side of the TEG. There is no effect on the flow resistance in the pipe. The radial fins can enhance heat transfer and temperature uniformity. Others like Wang et al. (2018) used the flat plate duct instead of the round pipe as the hot side for assembling more TEG pieces. The inner fin structure is designed for ensuring uniform temperature distribution. In the cold-side cooling, cooling can be done by air or water, like how the water jacket with different inner structures is used as the water cooling method on the cold side. Fernandez-Yanez et al. (2018) used the rectangle water jacket with a serpentine flow channel to assemble the flat plate duct. This structure can enhance the heat transfer coefficient and the temperature uniformity. The microchannel heat sink was also integrated with liquid cooling for reducing the thermal resistance of the heat exchanger. Rezania and Rosendahl (2012) devised a micro plate-fin heat sink to cool the cold side and reduce the coolant pumping power.

To realize the temperature difference on both sides of the TEG, the heat must be removed from the heat source to the surface of the hot side and from the cold side to the surroundings quickly. In terms of heat transfer, the heat pipe has higher heat transfer performance than the traditional metal fin. Lv et al. (2018) investigated the differences of three typical heat exchangers in the thermoelectric setup and the parasitic power loss by the mathematical model, which was verified via the experiments. There are the air cooling exchanger, water cooling exchanger, and flat heat pipe cooling heat exchanger. The heat pipe cooling exchanger is shown to be the most effective. Aranguren et al. (2015) also compared the finned heat sinks and heat pipes. In terms of heat dissipation, the heat pipes generated more than 43% net power while the air cooling was used.

Except for when the cold or hot side is used, the loop heat pipe is assisted in the TEG system to deal with the limited space and move the heat to any suitable space. Kim et al. (2014) used the TEG system associated with a loop thermosyphon; the novel design can be applied to hybrid cars. The TEG is installed at the exhaust pipe, and the cold side is associated with the condenser section of the loop. Through the loop thermosyphon, the heat is transmitted to the heat sink at a certain distance. Huang et al. (2015) used the loop heat pipe to expand the cooling surface and migrate the cold source. The condenser line is extended, and it is coupled with the metal plate to obtain the maximum power generation. The TEG system uses a passive cooling device without consuming power and free of noise. Jang et al. (2015) used the loop heat pipe to remove the heat sources under the limited space of the exhaust gas pipeline. The aluminum block with the condenser section is the hot plate of the TEG. The TEG pieces are set on both sides of the block and cooled by two special ducts. The flat heat pipe is also used to achieve the uniform temperature for a bigger TEG. Liu et al. (2017) utilized the flat heat pipe coupled with the TEG for achieving more power generation in the unit space.

For the TEG system, the number of TEGs in the unit space should be considered while considering the Td. The heat pipe can increase the number of TEGs in the unit space while improving the Td. Thereby, it can increase the power generation of the TEG device. So on the basis of the multi-stage TEG modules, a compact and scalable heat pipe heat exchanger was designed. Li et al. (2015) and Wang et al. (2016b) used the method of sandwiching heat pipes between these multi-stage TEG modules to increase the number of the TEG pieces. The cold side is cooled by water. On the original structure, a disc plate with six heat pipes was designed, the results showing that this design is an effective solution to enhance heat transfer by simulating. The heat can be transferred from the gas flow in the exhaust to the TEG effectively by immersing heat pipes perpendicularly into the exhaust flow. Li et al. (2017) also devised a modularized thermoelectric power generator for passenger vehicles. The TEG structure is also designed to fit the modularized demand. Every module is coupled with twelve heat pipes in the hot side and twelve heat pipes in the cold side for enhancing the heat transfer. They used the simulation to analyze the thermal performance and the power generation performance.

In this study, a novel TEG group device is designed as a similar structure to the disc sandwich structure. An experimental system is built to analyze the performance of the modularized thermoelectric power generator. In the experiment, air flow and water flow are analyzed, and power generation performance and temperature characteristics are obtained under different working conditions. 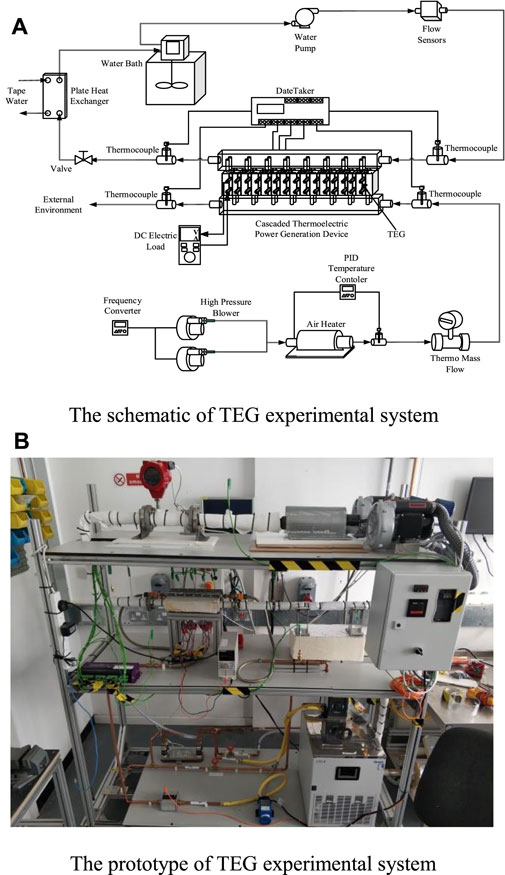 The heat source supply and test system include thermocouples, high-pressure blowers, an air heater, and a thermo-mass flow sensor. The thermocouples are used to measure the temperatures of the hot air inlet and outlet. The high-pressure blowers, which include two blowers, can supply the air volume. With the frequency converter, the high-pressure blowers can supply different air volumes. Through the air heater, the air can be heated to the specified temperature with the temperature controller. The thermo-mass flow sensor (Quadra Therm 780i) with an accuracy of 0.5 can measure the air volume with the specified temperature and flow. The cold source supply and test system include thermocouples, a valve, a water pump, a plate heat exchanger, a water bath, and a flow sensor. The thermocouples are utilized to measure the temperatures of the cold water inlet and outlet. The valve is a slide valve which can adjust the flow. The plate heat exchanger can exchange heat with tap water. Using the tap water to reduce the temperature of the water which has been heated, exchanging with heat pipes, the load of the water bath can be reduced. The water bath is used to cool the water and supply the water at a constant temperature. The flow sensor (IFM SU7000) is used to measure the flow with an accuracy less than ±3%MW + 0.2%MEW. 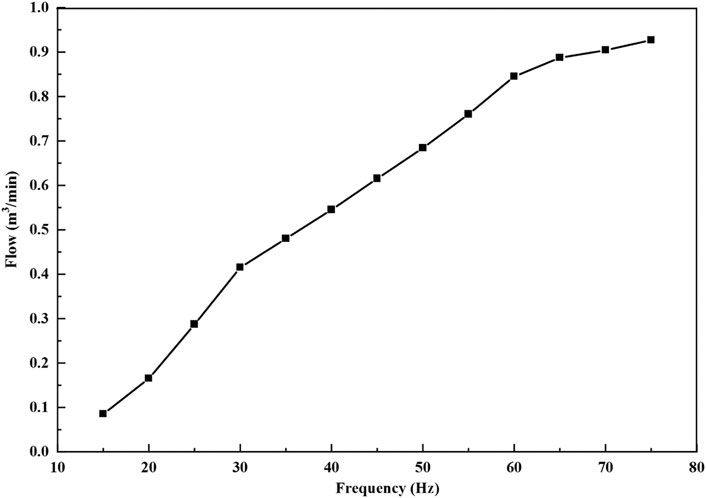 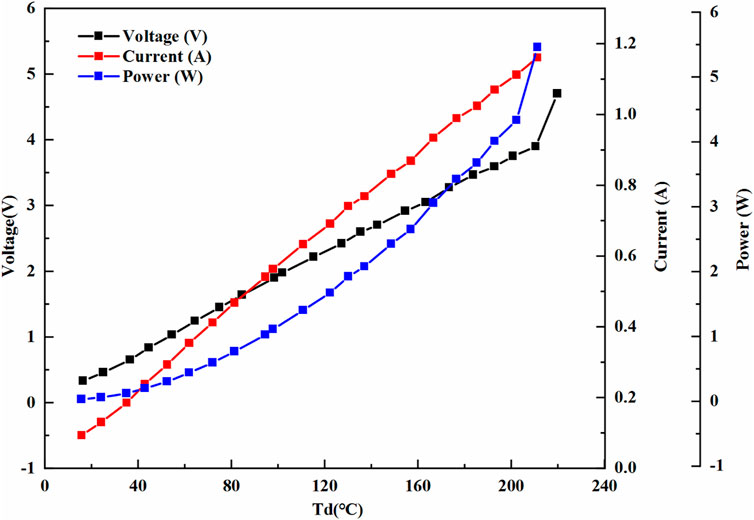 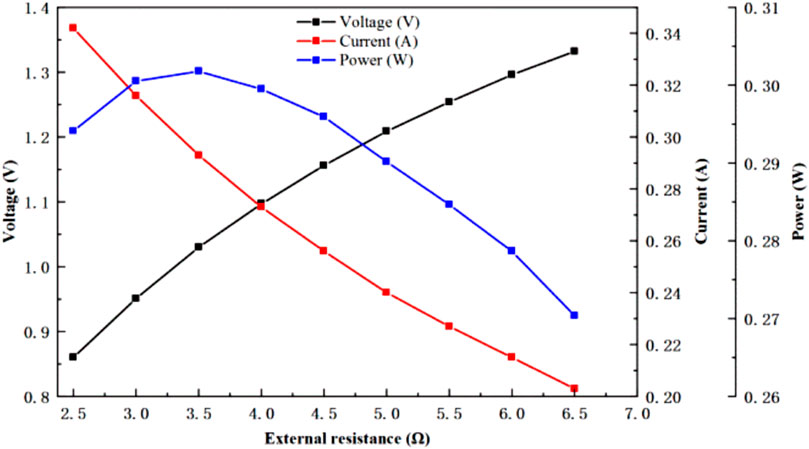 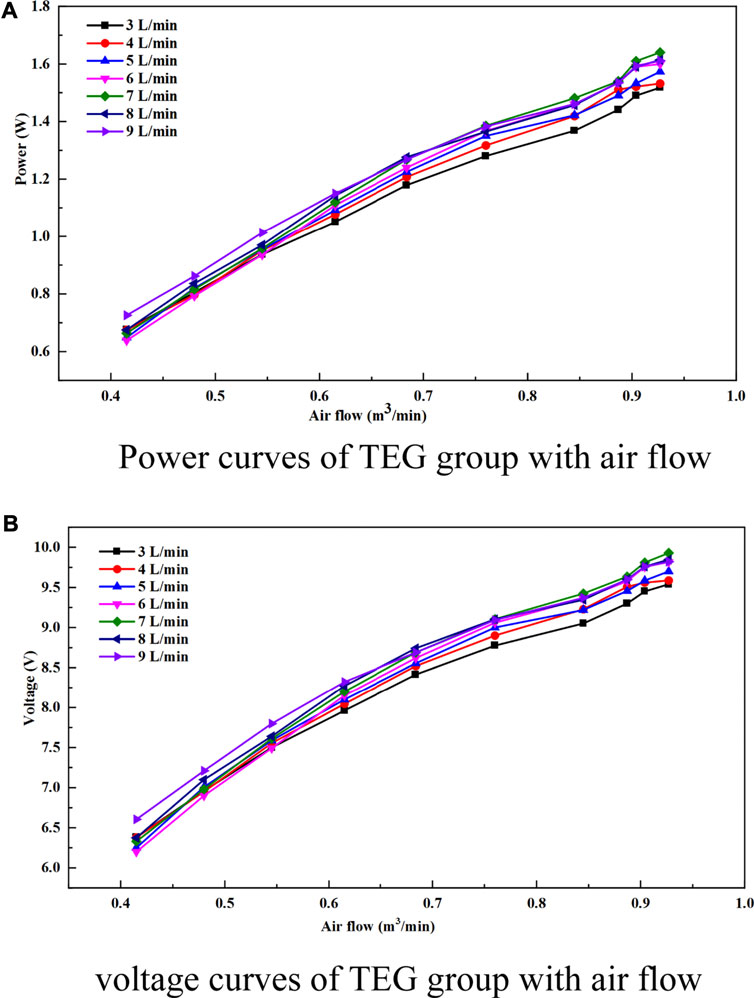 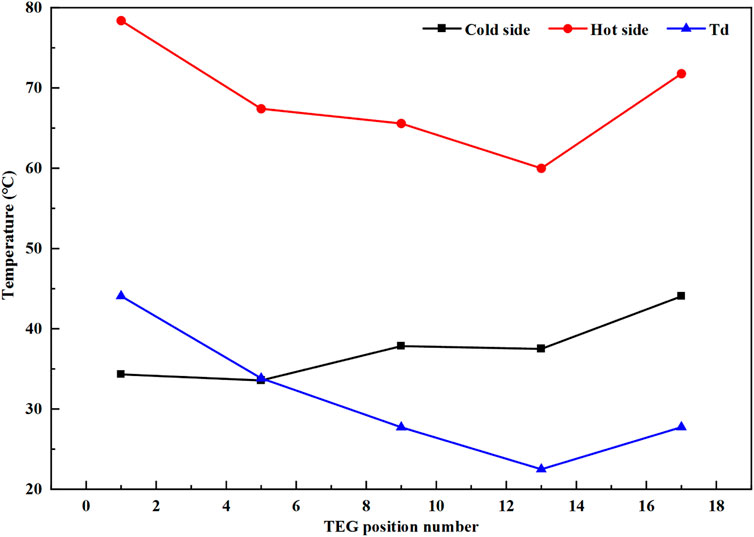 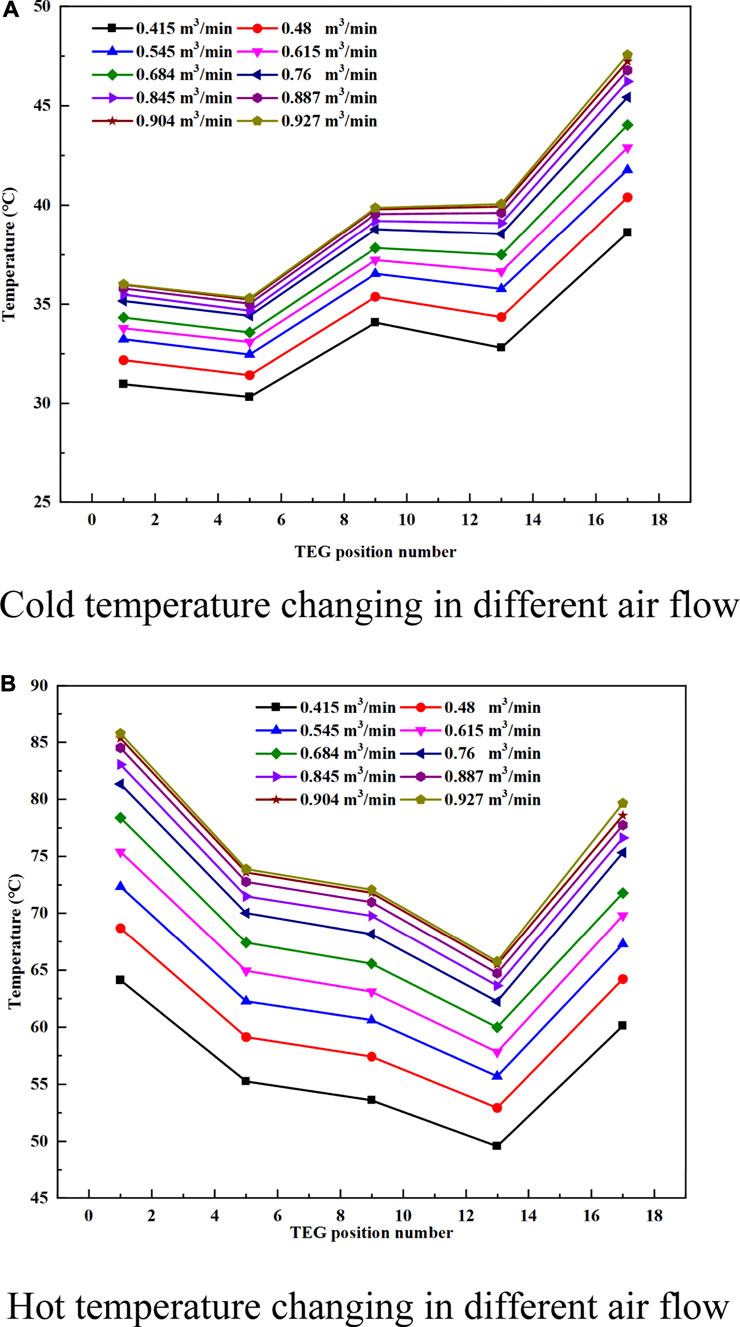 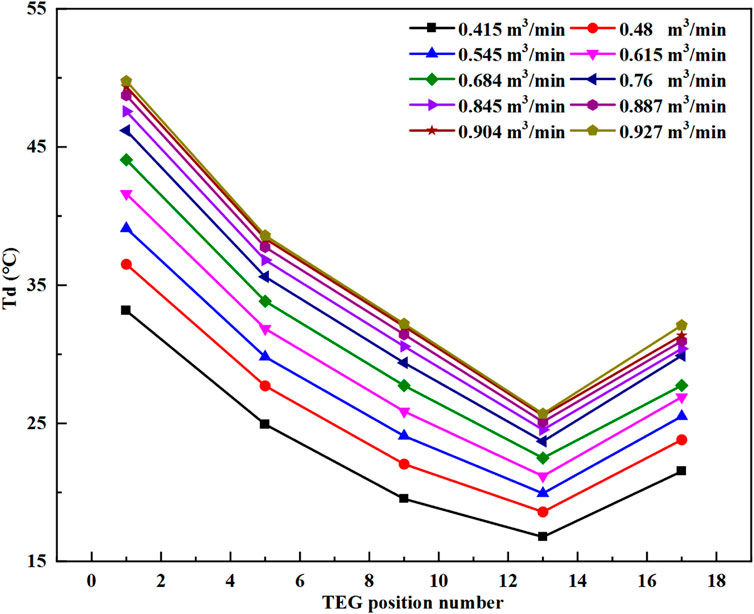 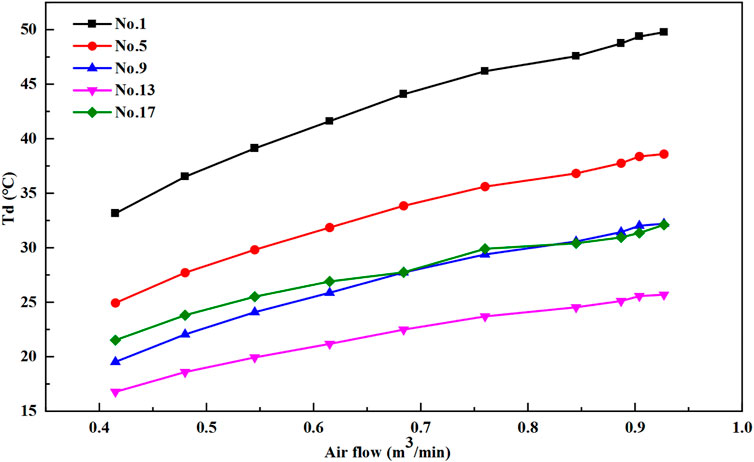 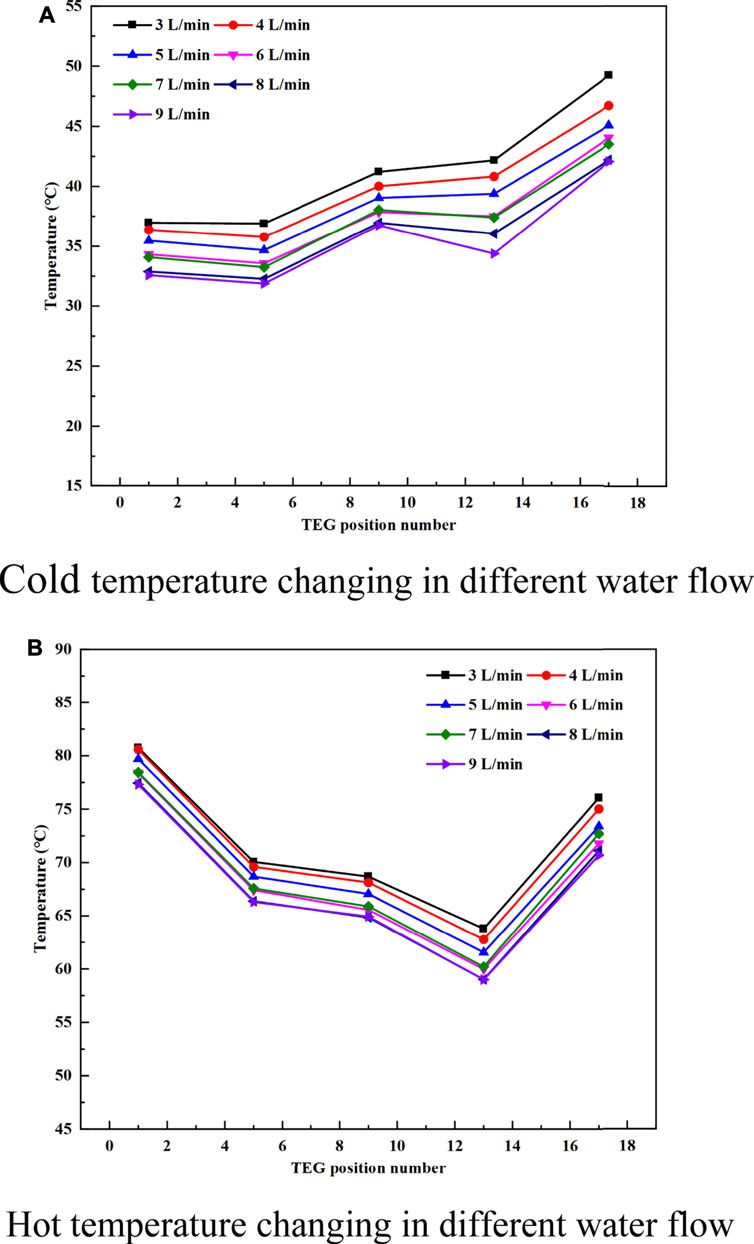 As shown in Figure 13, the Td curves show the wave trough phenomenon. The increasing water flow has little effect on weakening the wave trough phenomenon, and the Td values are almost not changed with the water increases. It is also shown in Figure 14 that the Td curves are almost horizontal, which means that the water flow changing cannot improve the Td value obviously. The reason is that the heat pipes in the cold side are cooled by water. The water has high heat transfer ability. The flow change cannot have a big effect on the convective heat transfer coefficient. So the flow change has little effect on the heat transfer between the heat pipes and the water. 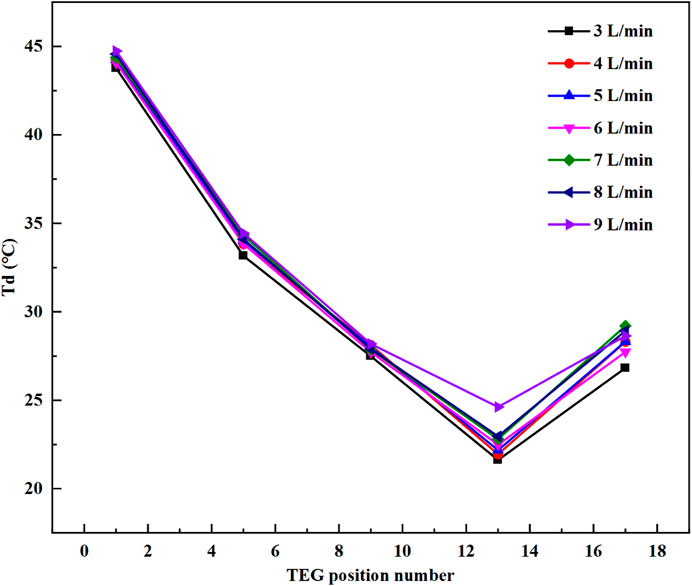 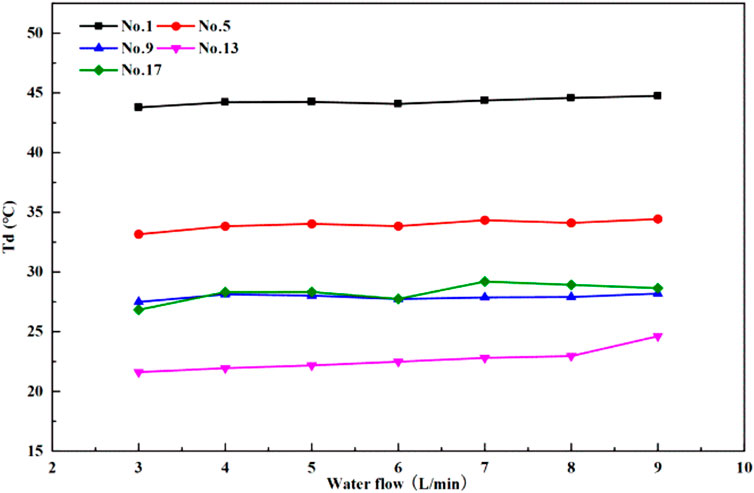 The TEG group device is built for analyzing the performance of the disc sandwich structure. 17 sets of TEG units are included in the TEG group device for analyzing the temperature distribution along the flow direction. The cold plate and the hot plate are used as the cold side and the hot side of the different TEG pieces simultaneously. The heat pipes are used to transfer the heat of the cold and hot sides while ensuring the high heat transfer coefficient. They can make as many TEG pieces as possible on the exhaust pipe per unit length. By analyzing different air flows and water flows, some results are obtained.

1) The power and voltage can be increased with the air flow or water flow increasing; the water flow has a smaller effect on the power generation than the air flow.

The work is supported by Double Ten “Science and Technology Innovation Project of Jilin Province of China” NO. 17SS022. The work is also supported by the China Scholarship Council (CSC) for the first author’s scholarship.

Copyright © 2021 Liu, Shi, Wang, Yan and Zhang. This is an open-access article distributed under the terms of the Creative Commons Attribution License (CC BY). The use, distribution or reproduction in other forums is permitted, provided the original author(s) and the copyright owner(s) are credited and that the original publication in this journal is cited, in accordance with accepted academic practice. No use, distribution or reproduction is permitted which does not comply with these terms.