Roles of Oxygen Vacancies in NiMoO4: A First-Principles Study

As a typical transition metal oxides semiconductor, NiMoO4 has attracted attention for its wide applications in electrochemical energy storage and conversion, such as supercapacitor and electrocatalytic water splitting (Du et al., 2018; An et al., 2019). However, the poor conductivity and electrochemical activity of NiMoO4 limited its electrochemical energy storage performance. Defects engineering is a common method to change the physical chemistry property of transition oxide materials. As a typical representative of defects, oxygen vacancies can effectively modulate their electronic properties, tune their bandgaps, and optimize their electrical conductivity (Zhang et al., 2020a). It has been proven experimentally that oxygen vacancies also can alter the interlayer spacing of metal oxide to promote faster charge storage kinetics (Kim et al., 2017; Qing et al., 2018). However, theoretical mechanism analysis of oxygen vacancies in NiMoO4 on its capacitance performance is still scarce.

NiMoO4 has a typical monoclinic crystal structure. Both the Ni and Mo atoms are in octahedral site, and the distance between Mo and O atom was 2.3–2.4 Å (Rodriguez et al., 1998; Rodriguez et al., 2000). When redox reaction occurs, the Ni2+ has oxidized to Ni3+; meanwhile, the MoO42− framework remains stable. Due to the band gap of NiMoO4 of 2.23 eV in natural temperature, the actual pseudo-capacitance performance of NiMoO4 was unsatisfactory (Yang et al., 2016).

In order to understand the physical property of oxygen vacancies in NiMoO4, we performed first-principles calculation on the electronic structure, total density of states (TDOS), and partial density of states (PDOS) of NiMoO4 − x for the case of x = 0.0, 0.125, 0.250, and 0.375 (call NMO-0, NMO-1, NMO-2, NMO-3, respectively) by the Vienna Ab-Initio Simulation Package (VSAP) based on density functional theory (DFT). We have constructed a supercell of eight unit cells consisting of 48 atoms. Furthermore, in order to understand the relationship between vacancies structures and electrical properties in NiMoO4, the formation energy of neutral oxygen vacancy in different chemical environments has been calculated.

The study of oxygen vacancies in NiMoO4 has been investigated by constructing a perfect supercell approach. Based on the optimized construction of perfect NiMoO4, the unit cell is built by 2 × 2 × 2 in the x, y, and z directions, and a supercell consisting of 48 atoms is used for vacancies calculation. To introduce oxygen vacancies, an interior atom is removed from the supercell. The theoretical model is shown in Figure 1. 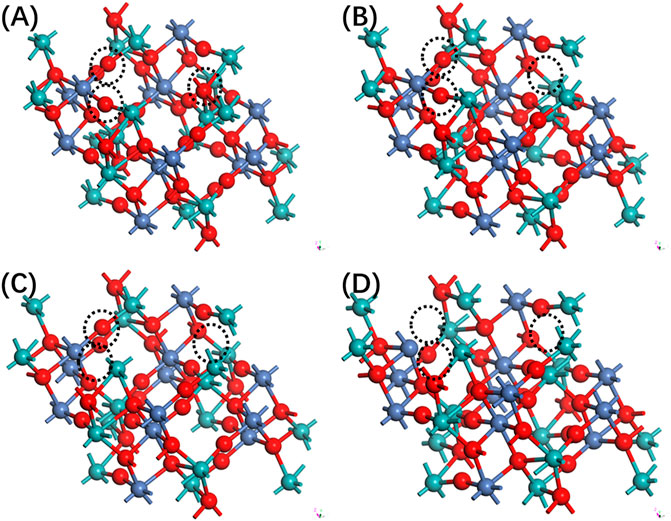 FIGURE 1. The side view of configuration of NiMoO4 with different oxygen vacancies. (A) Zero, (B) one, (C) two, and (D) three.

The DFT calculation was implemented in the Vienna Ab-Initio Simulation Package (Kresse and Joubert, 1999). For the exchange and correlation functionals, the Perdew–Burke–Ernzerhof (PBE) version of the generalized gradient approximation (GGA) exchange correlation was used (Blöchl, 1994; Perdew et al., 1996). In the DFT calculation, the NiMoO4 bulks with different concentrations of oxygen vacancies were used to uncover the electronic properties. Vacuum layer thickness of 20 Å was applied to avoid virtual interaction and obtain more accurate results. The k-grid mesh value was 5 × 5 × 1. In addition, DFT + U method was also introduced to describe the electronic properties and vacancies states in NiMoO4 bulks. The value of U given to Ni ions was 4 eV (Hinuma et al., 2007). The energy cutoff of 450 eV was used for the wave functions expansion. The energy and force converged to 1.0 × 10–5 eV atom−1 and 0.03 eV Å−1 to achieve high accuracy.

In order to reveal the oxygen vacancy electron doping effect on the electronic structure of NiMoO4, the band structure, TDOS, and PDOS, of stoichiometric NiMoO4 in 2 × 2 × 2 supercell with different amount of oxygen vacancies were calculated. Figure 2 shows the band structure of NiMoO4 with different numbers of oxygen vacancies from zero to three. The Fermi levels of NMO-0, NMO-1, NMO-2, and NMO-3 were 6.1014, 6.0258, 5.9609, and 5.8729 eV, respectively. All of the Fermi levels were located at zero in all the figures. The valence band maximum of NMO-0 is located at −0.079 eV, and the conduction band minimum is located at 0.056 eV. NMO-0 is a semiconductor with an indirect gap of 0.136 eV. Furthermore, NMO-1, NMO-2, and NMO-3 showed metallic electrical conductivity characteristics. With the introduction oxygen vacancies into NiMoO4, the extra-nuclear electrons of Mo have been released, which leading to increasing number of carrier concentration. The results are consistent with the DFT calculation result of SF Matar’s work (Matar et al., 2010). 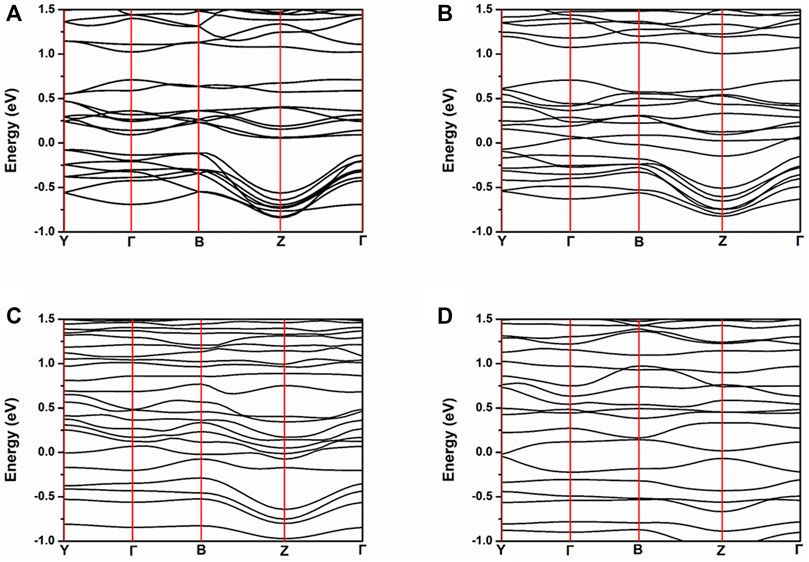 It can be obtained that the valence band of NiMoO4 can be divided into lower and upper valence bands. The lower band mainly consisted of the O 2d, Ni 3d, and Mo 3d, as shown in Figure 3. The upper valence band consisted of Ni 3d and Mo 3d. While oxygen vacancies were introduced into the NiMoO4 crystal, the band gap of NiMoO4 has narrowed. The introduction of oxygen vacancies in NiMoO4 gives more distribution of state density nearby the Fermi energy level, which indicates that more metallic properties of NiMoO4 (Zhang et al., 2020b). 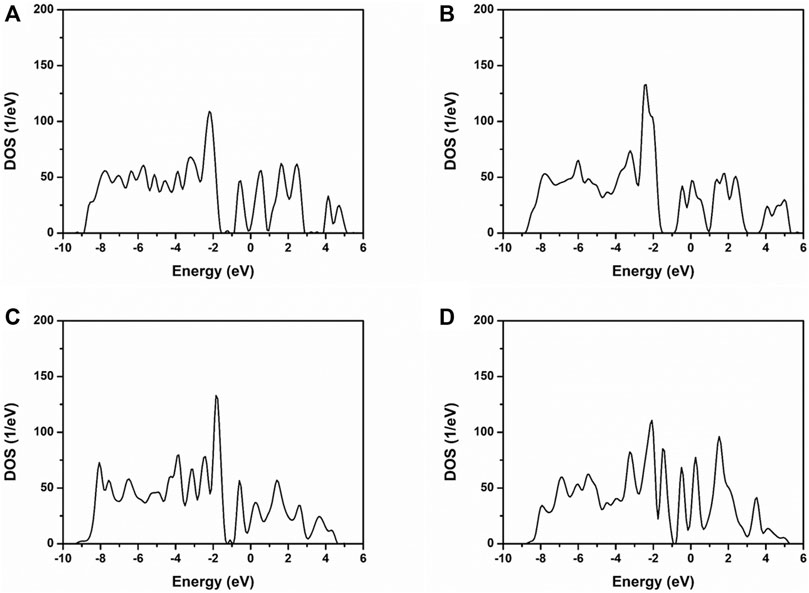 The PDOS of O 2p, Ni 3d, and Mo 3d for NMO-0, NMO-1, NMO-2, and NMO-3 are displayed in Figure 4. Nearby the Fermi level, the electronic states of NiMoO4 mainly consist of Ni 3d and Mo 3d. With the number of oxygen vacancies from zero to three, the half-peak width of Ni 3d and Mo 3d decreased and exhibited higher electron localization effect. This suggests that NiMoO4 has transformed to metallic properties with oxygen vacancies created into the NiMoO4 crystal, which is in accordance with the calculation consequence of band structure. 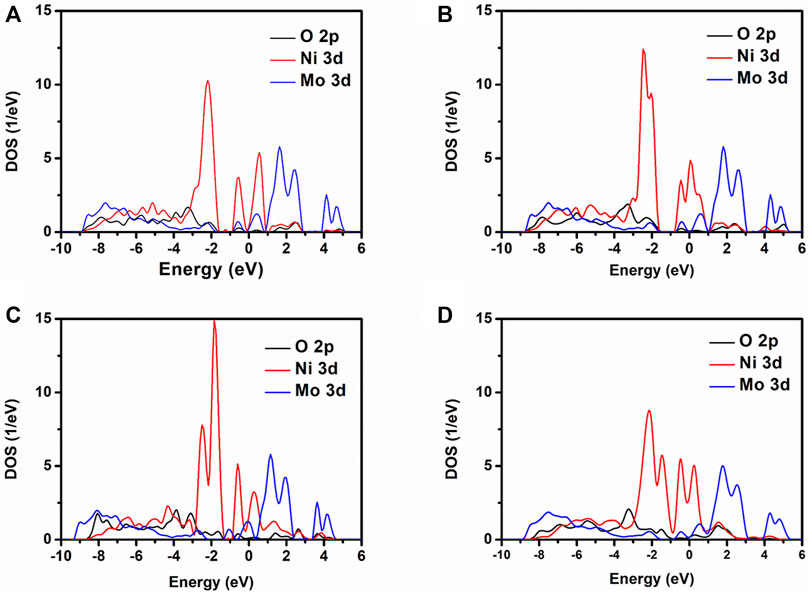 In summary, we analyzed the formation energy, band structure, DOS, and PDOS from zero to three oxygen vacancies in 2 × 2 × 2 NiMoO4 supercell with density functional theory calculation. The result revealed that only one oxygen vacancy can easily form in NiMoO4 crystal. The original NiMoO4 shows direct band gap semiconductor characteristic. With the amount of oxygen vacancies increase from one to three, the band gap of NiMoO4 become narrower and exhibit stronger metallic properties. The electron state nearby the Fermi level of NiMoO4 are mainly determined by Ni 3d and Mo 3d. Oxygen vacancies into NiMoO4 accelerate the electron localization effect of Ni 3d and Mo 3d around the Fermi level.

Copyright © 2021 Wen, Wang, Ding, Feng and Qing. This is an open-access article distributed under the terms of the Creative Commons Attribution License (CC BY). The use, distribution or reproduction in other forums is permitted, provided the original author(s) and the copyright owner(s) are credited and that the original publication in this journal is cited, in accordance with accepted academic practice. No use, distribution or reproduction is permitted which does not comply with these terms.