University of Electronic Science and Technology of China, China

In order to improve the accuracy of wind power output forecasting and ensure reliability of the power grid, multiplex parallel GAT-ALSTM, a spatial-temporal learning model for multi-sites wind power collaborative forecasting is proposed in this study. Topography was generated by using geographic information (longitude and latitude) obtained from the wind power generation sites. The GAT layer was used to capture the spatial correlation characteristics of multi-sites wind power. Feature dimension enhancement of each wind power generation site was achieved by aggregating the information from the adjacent sites. The ALSTM layer was used to capture the temporal correlation of each power output time series. The multiplex parallel structure of the model is designed to provide fast prediction of large-scale distributed wind power generation. The validity of the proposed multiplex parallel GAT-ALSTM was confirmed by comparison with the forecast results obtained by RNN, LSTM, ALSTM, and GNN-ALSTM. The testing results showed that, compared to RNN, LSTM, ALSTM, and GNN-ALSTM, the forecast results of the multiplex parallel GAT-ALSTM had the lowest mean absolute value error and the highest accuracy.

With the sharp increase in wind farms and installed capacity, the proportion of wind power in the total power grid capacity is also increasing. However, due to the intermittence and volatility of wind power, it will bring challenges to the safety and stable operation of the power grid (Yan et al., 2018; Li, 2022). Accurate forecasting of wind power can relieve the pressure of peak shaving and frequency modulation and effectively improve wind power accommodation capability on the power grid (Li et al., 2022; Liu et al., 2022).

In this study, we propose a collaborative forecasting model for multi-sites wind power forecasting with strong generalization ability and greater accuracy. The proposed model was termed the multiplex parallel GAT-ALSTM, which aimed to simultaneously capture the spatial-temporal correlations in multi-sites wind power systems and achieve multi-sites wind power multiplex parallel forecasts. In this model, the spatial correlation feature of wind power was extracted by a multi-channel parallel graph attention network. After that, the temporal features of multi-sites wind power were extracted by a multi-channel parallel ALSTM network. The efficiency and accuracy of the forecast were improved by the aforementioned method. The rest of this article is organized as follows: Section 2 describes the prerequisite knowledge for the graph attention network and attention-based short- and long-term networks; Section 3 introduces the concrete realization scheme of multiplex parallel GAT-ALSTM; Section 4 provides experimental simulation and results analysis; and, Section 5 discusses the experimental conclusions.

To interpret the multiplex parallel GAT-ALSTM model, some basic knowledge of GAT and ALSTM is essential.

The graph attention network is a variant and improvement of the traditional graph neural network, which considers the topological relationship between the target node and the neighbor node from spatial dimension, and can adaptively assign different weight coefficients to the surrounding nodes in the aggregation process, which improves the learning and expression ability of the graph neural network for non-Euclidean data.

where represents the feature vector of node , represents the feature vector of node , and represents attention coefficients that indicate the importance of node j’s features to node i. Attention refers to the attention mechanism layer, which can be in a form without parameters, such as the inner product of two vectors, or in a form with parameters, such as a single-layer linear fully connected layer.

The features of first-order neighbor nodes can be extracted by a single layer network, while the features of second-order or multi-order neighbor nodes can be extracted by stacking multiple GATs. The attention mechanism is introduced in the graph attention network when updating the node information, which makes the graph neural network focus more on the useful feature information of the neighbor node to easily capture the spatial correlations of the neighboring node according to the topology structure, which largely improves the generalization and learning ability of the network.

A long short-term memory network (LSTM) is a popular and effective deep learning model for processing time series data. The gating mechanism introduced in LSTM solves the problem of gradient disappearance in the training process of a recurrent neural network. The LSTM model is shown in Figure 2A, and the transfer function of each unit is given by: 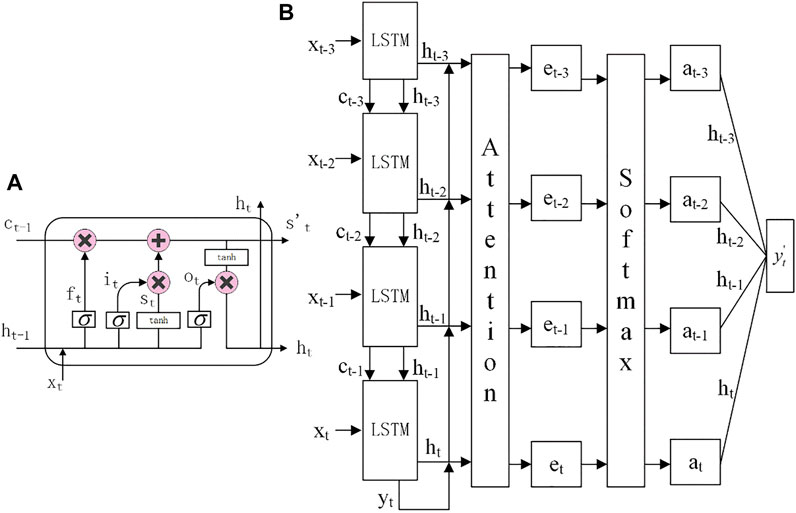 (1) Input layer: Using the geographic information (longitude and latitude) of the wind sites, a topology graph G with N nodes is generated. Each node corresponds to a wind site. The input of the GAT-ALSTM model is the wind power generation of N sites at T slots before the prediction time, . The wind power generation is embedded into the topology graph G as node features.

(2) Multiplex parallel GAT layer: T parallel GAT networks are used to simultaneously learn the correlation of wind power between different sites at T slots from the spatial dimension. GAT uses different weights to aggregate the information of neighbor nodes according to the learned correlation among sites. The features of each site are dynamically updated.

(4) Output layer: uses a linear transform layer to predict wind power at all sites at time, . 3.2 Prediction based on a multi-channel parallel GAT-ALSTM model

A set of wind power data of model input is denoted as:

where, means the nth wind power of N wind sites at time t, N represents the number of wind sites, and T is the input time window of the model. The input sequences of the nth wind site are written as:

The model input matrix is denoted as:

A one-step ahead forecast is applied in the model, which inputs the content sequences of N wind sites from time 1 to time T, and outputs the predicted wind power of N wind sites at time (T + 1), which is denoted as:

The prediction model can be described as follows:

where, θ is the parameter set and F is the multiplex parallel GAT-ALSTM model.

In order to achieve wind power prediction at multiple sites based on the multiplex parallel GAT-ALSTM model, the specific steps are as follows:

Step 1: Data preprocessing, such as data cleaning and normalization, is performed first, then the history power data of the selected N wind turbines are divided into training sets and test sets for model training and testing.

Step 2: Generate topography by using the geographic information (longitude and dimension) of the sites. The history power data of the selected N wind turbines and the wind power of N stations at the same time are used as features of nodes in each topological structure graph. T GAT networks are used for parallel computation. Finally, the characteristic matrix of n sites of T moments that aggregate the information of neighbor node is output by the GAT.

Step 3: Use the output of the GAT network as the input to the ALSTM. After processing by the GAT network, the initial features of the n sites at each time are increased from one dimension to high dimensions. Finally, the ALSTM uses enhanced feature data to output the wind power at N sites.

Step 5: Use the model obtained by the aforementioned steps to make predictions on the test set sample and analyze the results.

Due to measurement errors or data storage errors in the data sampling equipment, there may be random errors in the original sampling data. These erroneous values will interfere with the efficacy of the model in wind power forecasting. In order to improve the speed of the machine learning model gradient descent to find the optimal solution, it is also necessary to preprocess the original data. The formula is as follows, where represents the wind power at a certain moment, and X represents the wind power sequence:

For wind power generators with a capacity of 1.5 MW, the reasonable range of power outputs is 0–1.5 MW. Data beyond this range are regarded as abnormal and are eliminated and replaced with interpolated data. Lastly, all data are normalized.

To verify the validity of the proposed model in an actual wind power forecasting task, the multiplex parallel GAT-ALSTM model and other associated models were used for wind power forecast experiments. The RNN and LSTM networks are common time series prediction models, and the ALSTM and GNN-ALSTM networks are used to verify the effectiveness of the attention mechanism. The experiment consists of one-step ahead forecasting of wind power. Figure 4A shows the location of each site. Figure 4B shows the topology graph of the seven wind sites. Figure 4C shows the attention weight coefficient between the wind sites learned by the GAT layer. It can be seen that the attention coefficient basically conforms to the rule of “near large and far small” in the spatial dimension. Figure 4D–J shows a comparison diagram of wind power forecasts at wind sites 1 to site 7 using five network models. Table 1 shows the evaluation index values of five network models for wind power forecast at sites 1 to 5. 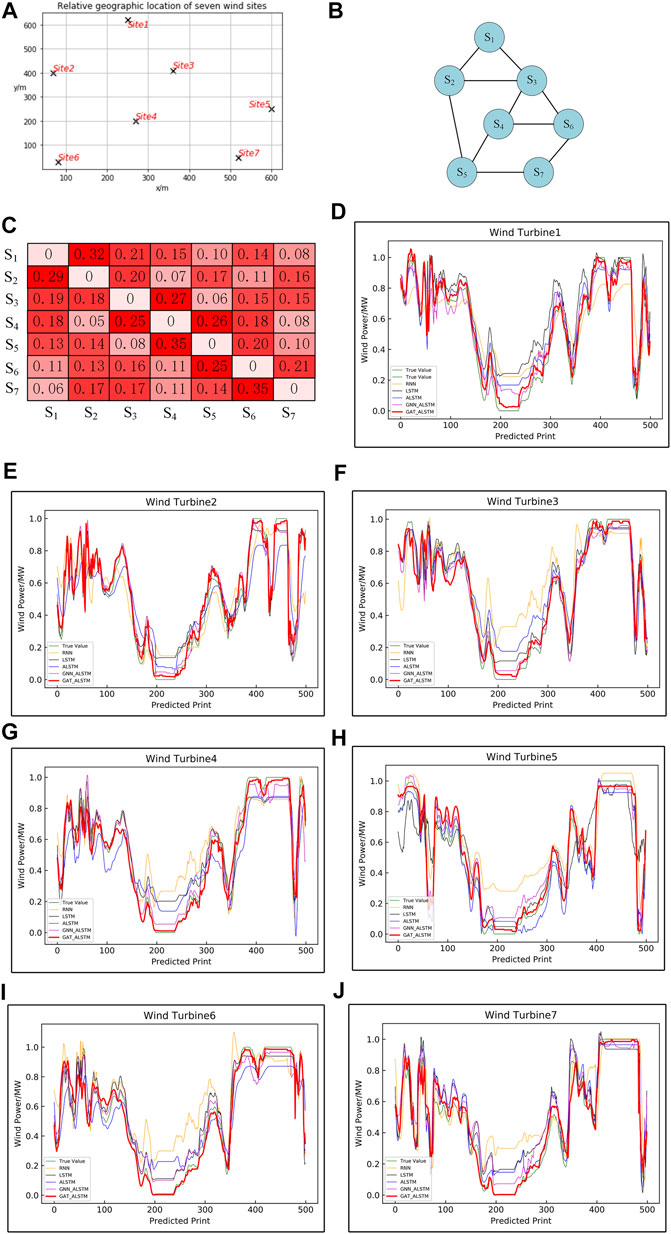 This study has proposed multiplex parallel GAT-ALSTM, a spatial-temporal learning model for multi-sites wind power collaborative forecasting. Leveraging the geographical information and historical power output data of adjacent wind sites, the model simultaneously captured the spatial-temporal correlation in multi-sites wind power by two attention mechanisms. Based on the learned spatial-temporal correlation, it improved the accuracy of the forecast. The multiplex parallel structure of the model is suitable for fast prediction of large-scale distributed wind power generation. The validity of the proposed multiplex parallel GAT-ALSTM is confirmed by comparing its forecast results with those obtained from RNN, LSTM, ALSTM, and GNN-ALSTM. It was found that forecast errors were minimized by the proposed model; hence, the proposed model shows good performance in forecasting wind power.

In potential future work, we plan to incorporate atmospheric factors such as wind speed and temperature as exogenous variables in the learning process to further enhance the forecasting ability.

Copyright © 2022 He, Fu and Luo. This is an open-access article distributed under the terms of the Creative Commons Attribution License (CC BY). The use, distribution or reproduction in other forums is permitted, provided the original author(s) and the copyright owner(s) are credited and that the original publication in this journal is cited, in accordance with accepted academic practice. No use, distribution or reproduction is permitted which does not comply with these terms.