Gouhier and Pillai (2019) question the findings from our recent article showing that biodiversity enhances herbivory on Caribbean coral reefs (Lefcheck et al., 2019). However, the issues they raise stem from a misunderstanding of coral reef ecology, an incomplete reading of our methods, and a misapplication of statistical practices. Here, we show that our original conclusions remain robust: high diversity of herbivorous fishes, both within and across sites, enhances the functionality of coral reefs in the Dominican Republic. We respond to each of their criticisms below.

First, Gouhier and Pillai (2019) argue that rates of herbivory are a poor indicator of ecosystem functioning, instead suggesting that we should have measured the impact of herbivory on turf algae (i.e., its cover or standing stock) to assess ecosystem function. This argument is based on an overly simplistic perception of coral reef ecosystems and a view of ecosystem functioning that is skewed toward bottom-up forcing. Coral reefs are complex ecosystems with countless ecological pathways, and their benthic communities are subject to a variety of processes that ultimately shape their composition (Doropoulos et al., 2016). For example, the cover of turf algae on the reef is strongly influenced by the amount of open (non-coral) substrate available for colonization. However, among the many drivers of benthic composition, it is well-established that herbivory is a dominant process, as it exerts strong top-down control on the benthos (Lewis, 1986; Hughes et al., 2007; Mumby et al., 2007; Burkepile and Hay, 2008). Further, herbivory is subject to human interference via overfishing (Edwards et al., 2013), and the herbivore community (and the associated grazing it provides) is now considered an important indicator of coral reef status (Graham et al., 2015). While the authors are correct to assert that other processes could be studied as ecosystem functions on coral reefs, the process of herbivory plays a central role in the functioning of these ecosystems (Bellwood et al., 2004), has been a cornerstone of ecological investigation for decades (Steneck et al., 2017), and was the focus of our study.

Second, Gouhier and Pillai (2019) claim that because we found no relationship between mass-standardized bite rate and the cover of turf algae or coral in our statistical model, there is no biodiversity effect. It appears, however, that the authors have misread our Methods, as the coral and algal turf abundance values used in our model were derived from surveys of the entire reef, not of the local plots where the diversity-function relationships were shown. In fact, every effort was made to equalize algal turf abundance within each experimental plot (~75% cover, see Methods) to ensure equivalent resource availability at the plot-level. The reef-wide measures of turf algae and coral abundance were then included as covariates to control for general resource availability: for example, would grazing rates within the plots be biased because of unusually high or low turf availability in the vicinity? The lack of an effect of ambient turf or coral abundance on focal grazing rates in our model suggests that the plot-level measurements of bite rate were not significantly biased by the general availability of algae or substrate at each site, a key control on our interpretation of the local effects.

Additionally, as we originally noted, evidence is emerging from coral reef systems that turf canopy height (and not its cover) is among the primary determinants of critical processes such as juvenile coral recruitment (Kuffner et al., 2006; Arnold et al., 2010; Arnold and Steneck, 2011). Specifically, thick algal turfs have been shown to disrupt coral recruitment by acting as sediment traps (long sediment-laden algal turfs; LSATs), while shortly-cropped turf mats (which are maintained by high grazing rates) are favorable to coral recruitment (short-productive algal turfs; SPATs) (Goatley et al., 2016). Furthermore, many other processes go on to determine the abundance of adult corals on the reef (e.g., the supply of coral propagules, seawater temperature, disease events, sedimentation, nutrient levels, and so on) and thus it is not surprising that there was not a significant raw correlation between bite rate and average adult coral cover without accounting for these many other factors.

Third, Gouhier and Pillai (2019) suggest that our results do not show a true multi-scale biodiversity effect. However, while our study does not partition diversity into traditional α-, β-, and γ-components, the LCBD metric we employed (Legendre, 2014) provides key information on the regional context for each site in terms of its richness and composition. The authors suggest that a true example of multi-scale biodiversity effects comes from the study by Winfree et al. (2018). When we repeat the analysis by Winfree and colleagues using our own data, we find that all nine species of herbivores are necessary to maximize grazing at even 75% of its mean level across the 10 sites (Figure 1), suggesting that our original interpretation—that different species (or sets of species) are required to maximize herbivory across the seascape—is valid and robust. 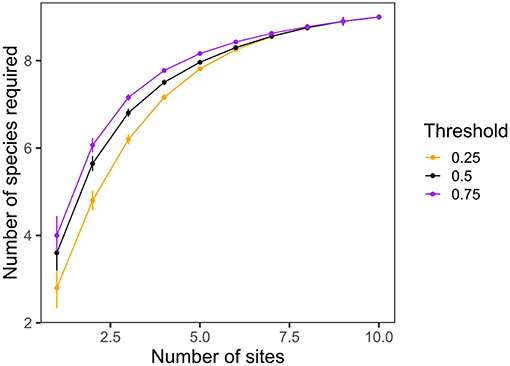 Figure 1. The minimum number of species at any combination of sites required to achieve a given threshold of the average mass-standardized bite rate across all sites, as a function of the number of sites considered. Methods as in Winfree et al. (2018).

Fourth, Gouhier and Pillai (2019) purport that our results are confounded because bite rate (the response variable) was mass-standardized and herbivore biomass was included as a predictor in our model. However, we specify in our Methods that each bite was scaled by the individual biomass of the fish responsible (recognizing that larger individuals take larger bites due to morphological scaling of gape width with body size). In contrast, the “biomass” predictor was a measure of the total community herbivore biomass observed across the entire video, and there is virtually no correlation between the two (r = −0.003). Gouhier and Pillai (2019) also note that herbivore biomass remains significant when non-mass-standardized bite rates are modeled, ignoring that the biodiversity effects also remain significant (P = 0.001 for both α and βrich, as in the original presentation).

An important aspect of this argument, which Gouhier and Pillai (2019) missed, is that biodiversity also depends in part on species abundance (i.e., adding individuals can only maintain or increase the number of species, not reduce it). The inclusion of biomass as a covariate is key then, because it allows us to interpret the biodiversity effect as the expected change in bite rate with each additional species or change in composition when total community biomass is held at its mean. In other words, we have statistically controlled for differences in herbivore biomass (driven by individual abundances, since they are highly correlated) when estimating the biodiversity effect, thus accounting for the well-known dependency of the two. Further, Gouhier and Pillai's practice of regressing residuals (e.g., removing the biomass effect) is known to generate biased outcomes (Freckleton, 2001). Instead, multiple regression (e.g., ANCOVA) is the preferred method for incorporating covariates such as biomass.

Fifth, Gouhier and Pillai (2019) suggest that the “the positive effect of β_‘rich’ diversity on local bite rate is due to multicollinearity between the explanatory variables α, β_‘repl’ and β_‘rich’.” The consequences of multicollinearity would be inflated standard errors of the estimates, which would in fact reduce our capacity to observe a significant effect of βrich (Graham, 2003). Our results demonstrate otherwise. Further, we employed variance inflation factors (Zuur et al., 2010) to test for the presence of high multicollinearity in our models, and dropped any highly collinear predictors from our final models (VIF >2, see Methods).

Gouhier and Pillai (2019) go on to say that the significant three-way interaction between the three diversity metrics precludes interpreting the main effects, which is questionable for three reasons: first, the authors express no a priori ecological expectation for an interaction among these three components. We caution against fitting three-way interactions without a strong justification, since they are difficult to interpret mechanistically or ecologically. Second, examination of the predicted effects plots for the interaction suggest that the negative effect of α-diversity only emerges when both βrich and of βrepl are high, a situation that requires extreme values that are well-outside the spectrum of the values observed in our dataset, and may in fact only manifest along strong environmental gradients with high turnover. Finally, the three-way interaction is dependent on the inclusion of a single data point. When this point is excluded, the interaction effect is non-significant (P = 0.053).

Finally, Gouhier and Pillai (2019) claim that our results are invalid because the β-components of diversity explain only 12% of the total variance in mass-standardized bite rate. We argue that a low proportion of variance explained does not negate the potential real-world contributions of β-diversity, and likely reflects the relatively small pool of species observed in our study, which limits the scope for this effect. One might expect a greater effect of β-diversity over larger scales or in regions such as the Indo-Pacific, where herbivore richness is much higher.

We advocate for caution when categorically rejecting findings based on the proportion of variance explained, as it has been shown to be exceedingly low across ecological studies (e.g., 2–5%; Møller and Jennions, 2002). When purely based on explained variance, we might well-question much of the field of ecology. Most importantly, however, α-diversity alone explained 22% of the total variance in bite rate, and together with the two components of β-diversity, biodiversity overall explained nearly as much of the model variance as biomass (33 vs. 41%). Thus, as we originally posited, biodiversity at large scales appears to be an important, albeit not the sole, driver of herbivory rates on Dominican coral reefs.

Copyright © 2019 Lefcheck, Brandl, Innes-Gold, Steneck, Torres and Rasher. This is an open-access article distributed under the terms of the Creative Commons Attribution License (CC BY). The use, distribution or reproduction in other forums is permitted, provided the original author(s) and the copyright owner(s) are credited and that the original publication in this journal is cited, in accordance with accepted academic practice. No use, distribution or reproduction is permitted which does not comply with these terms.