Plant invasions are complex processes (Theoharides and Dukes, 2007; Catford et al., 2009; Lockwood et al., 2013) so that dozens of hypotheses (e.g., ideal weed and novel weapons) have been put forth to explain invasion success (Catford et al., 2009; Jeschke, 2014). Successful invasion needs sufficient propagules, which can reflect the idiosyncratic nature of invasions (Lockwood et al., 2005). To date, two invasion hypotheses (i.e., propagule pressure and global competition) primarily based on propagules have been proposed (Catford et al., 2009). Seeds, stolons, and rhizomes are the most important propagules of plants (Harper, 2010) and thus play an extremely crucial role in the invasion processes (Lockwood et al., 2005). Overall, the relative importance of seeds, stolons, and rhizomes varies among different plant invaders (Wang et al., 2016) and/or with invasion stages within the same plant invader (Theoharides and Dukes, 2007). Actually, clonal plant invaders account for a high proportion of plant invaders, particularly in grasslands (Wang et al., 2016) and the mortality of established genets is a rare event and clonal growth plays a crucial role in spatial spread after invader establishment (Szymura and Szymura, 2016). Additionally, the relative role of different propagules depends on manners through which a given taxon is introduced from its native range into new ranges.

Here, we focused on seeds for the following reasons. First, seeds are among the fundamental progagules of higher plants and commonly determine the success of their early establishment (Harper, 2010). Second, the seedlings of plant invaders usually occupy disturbed sites and seed dispersal is important for their long-distance expansion (Lockwood et al., 2013). Of seed traits, seed quality and germination, to a larger extent, determine the recruitment of seedlings and dynamics of plant populations (Fenner and Thompson, 2006; Harper, 2010). Similarly, for plant invaders, seed quality and germination largely influence their success, and ultimately shape their capacity to exclude native plants (Valliere et al., 2019).

An abundant literature shows that seed quality and germination are unavoidably influenced by a wide range of ecological factors (Harper and Benton, 1966; Baskin and Baskin, 1998; Guillemin and Chauvel, 2011; Valliere et al., 2019; Wang and He, 2019). One of these, air temperature has long been recognized as an important factor influencing seed quality and germination (Baker, 1965; Baskin and Baskin, 1998; Fenner and Thompson, 2006). Climate warming is occurring rapidly and strongly affects plants (IPCC, 2015). This is because plant performance is highly temperature-dependent (Crawley, 1997). Since climate warming can influence plant invasions (Bradley et al., 2010), this has particular relevance to seed quality and seed germination (Aragn-Gastlum et al., 2018). For example, recent studies have shown that climate warming may strongly influence seed quality and seed germination (Aragn-Gastlum et al., 2018; Li et al., 2018) and plant mortality and phenology during the invasion process (Peng et al., 2018; He and He, 2020). Plant populations from native and non-native ranges perform differentially, including reproductive output, seedling recruitment, individual density, and competitive ability (Lockwood et al., 2013). Thus, studying climate warming effects on the seed traits of native and invasive populations could be useful for understanding invasion success in the context of global warming from a biogeographic perspective.

Solidago canadensis, native to North America, is a worldwide invasive forb, and has now invaded Europe, Asia, Australia, and New Zealand (Weber, 2001; Abhilasha et al., 2008). Solidago canadensis was introduced into Europe in the seventeenth century (Weber, 2001). This invader was introduced into China in 1913, has occupied several provinces in southeastern China, and is expanding rapidly (Dong et al., 2006, 2015). Overall, S. canadensis usually appears along roadsides, abandoned agricultural lands, and other disturbed habitats (Dong et al., 2015). In its native range (i.e., North America), the inflorescence of S. canadensis is evident in late July or early August (Werner et al., 1980). However, in its invaded range (i.e., China), it does not start flowering until September (Peng et al., 2018, 2019). Solidago canadensis is a perennial forb with large clonal colonies, can grow up to 4 m, and its flowers are self-sterile and seeds are wind-dispersed (Abhilasha et al., 2008; Dong et al., 2015). In our experiment, the seeds of S. canadensis were field-collected from multiple populations across multiple sites (Table 1), regardless of native or invaded ranges. Specifically, we located five sampling sites per range and collected seeds from six mature individuals per site spaced at least 10 m apart. The seeds from a particular individual were put into an envelope. Meanwhile, we also collected the seeds of common native plants from the both ranges of S. canadensis. These collections allowed us to create synthetic plant communities.

Table 1. Field sites where seeds were collected for the experiment.

Our long-term experiment, which encompassed (1) climate warming, (2) nitrogen deposition, (3) community types, (4) species origin, and (5) population sources, began in June 2012. At the beginning of the experiment, we set up 256 mesocosms including dozens of plant assemblages from seed (i.e., monocultures of S. canadensis and mixtures consisting of S. canadensis and four native plant species from North America or China). The conditions of mesocosms and their photographs have been described previously (Peng et al., 2018). As described above, each mesocosm was either a monoculture or a mixture. Accordingly, there were about 20 S. canadensis populations per manipulation initially. The long-term experiment has been described previously (Peng et al., 2018, 2019). Briefly, our long-term experiment was a factorial design and included five factors (see above), each with two levels. All the warming mesocosms were continuously heated with a MSR-2420 infrared radiator (Kalglo Electronics, Bethlehem, PA, United States) that was suspended 1.5–2.0 m above the soil surface, roughly increasing air temperatures by 2°C (Peng et al., 2018, 2019). This increase in air temperature (i.e., approximately 2°C) was chosen according to the range (1.5–3.0°C) projected by IPCC (2015) and the future goal by the Paris Agreement. For each unwarmed mesocosm, one “dummy” heater with the same shape and size as the infrared radiator was hanged to simulate the shading effect of the infrared radiator. Non-stop warming has been lasting since June 2012. The long-term temperature changes under the heated and unheated conditions have been reported in our recent paper (Peng et al., 2018).

We conducted the seed germination experiment in April 2018, roughly corresponding to the beginning of a growing season. Prior to germination experiment, we first measured seed mass. To determine seed mass, we randomly selected 100 seeds from each population and weighed their air-dried mass, and such a measurement was replicated five times. Thousand-seed mass was calculated as: hundred-seed mass × 10. To explore the effects of experimental manipulations on subsequent seed germination, we performed a germination experiment in a naturally lit greenhouse at the Chengdu University of Technology (a naïve environment), in which the air temperature and relative humidity ranged 15–25°C and 60–80%. Specifically, seeds from each population were placed in petri dishes filled with filter paper (i.e., 30 seeds per petri dish). Each population had five replicates of 30 seeds, totaling 265 petri dishes (53 populations × 5 replicates per population). All petri dishes were watered as needed to maintain adequate moisture. Seed germination, defined as the radicle emergence, was checked daily and then germinated seeds with radicle were removed from petri dishes.

The normality of data and homogeneity of variance were tested using the Shapiro-Wilk test and Bartlett’s test, respectively. We fitted a linear mixed effect model using the NLME package with the “lme” function (Pinheiro et al., 2017) to examine the effects of temperature regimes (i.e., ambient vs. warming) and population sources (i.e., native vs. invasive) on thousand-seed mass, first germinating time, half germinating time, and germination rate, in which plant populations were treated as a random term. All the analyses were performed using R v.4.0.2 (R Core Team, 2020). 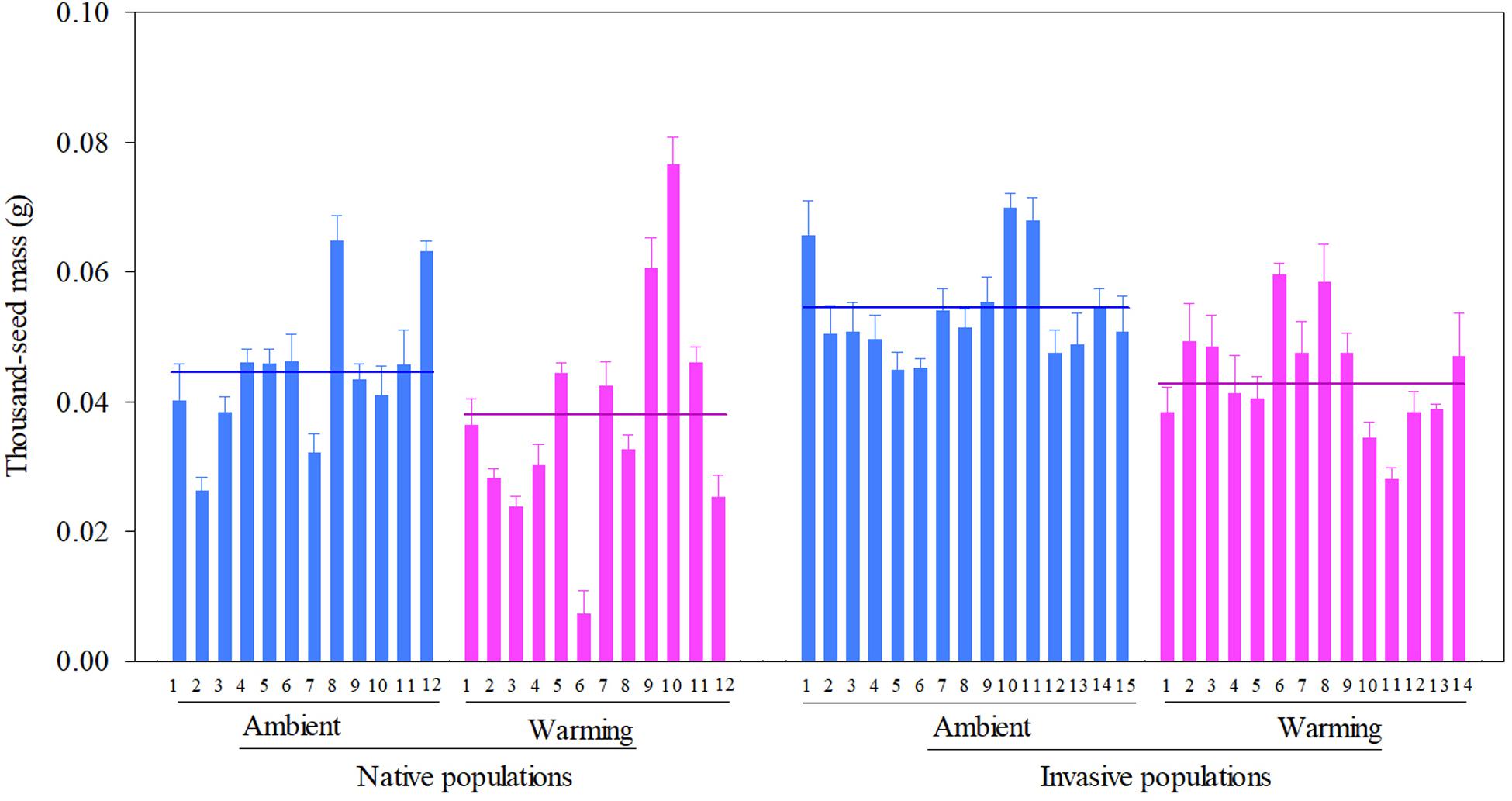 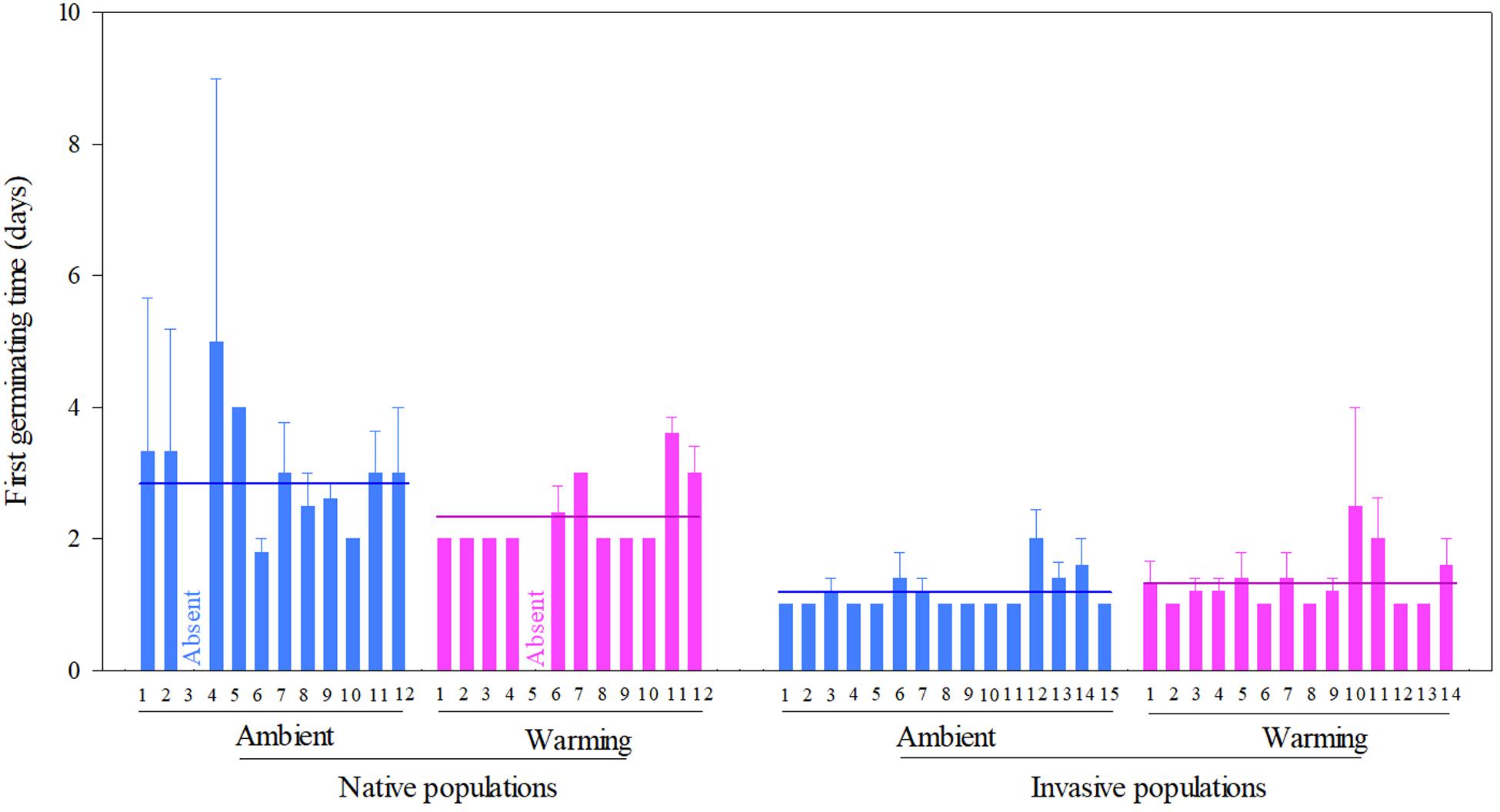 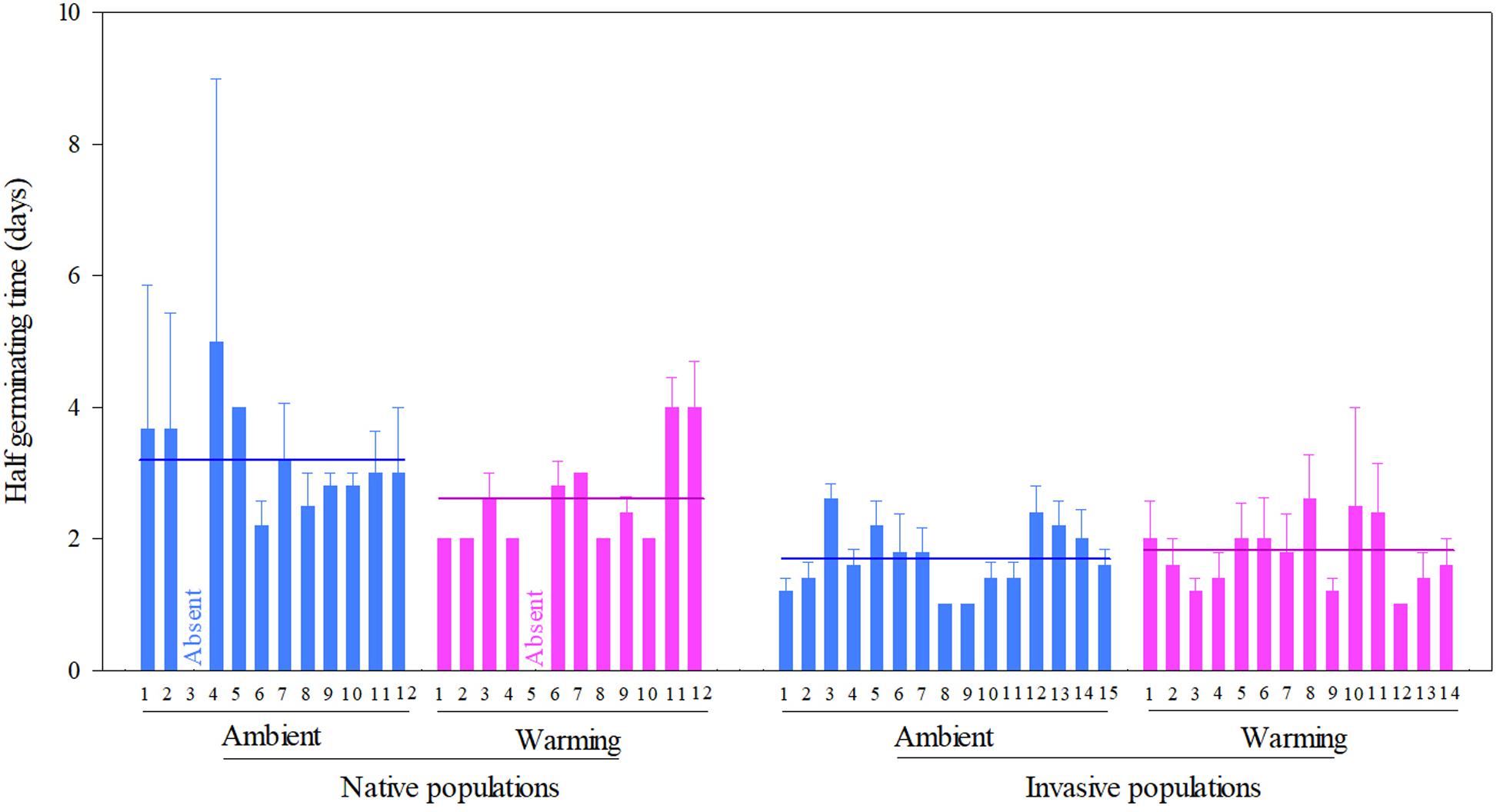 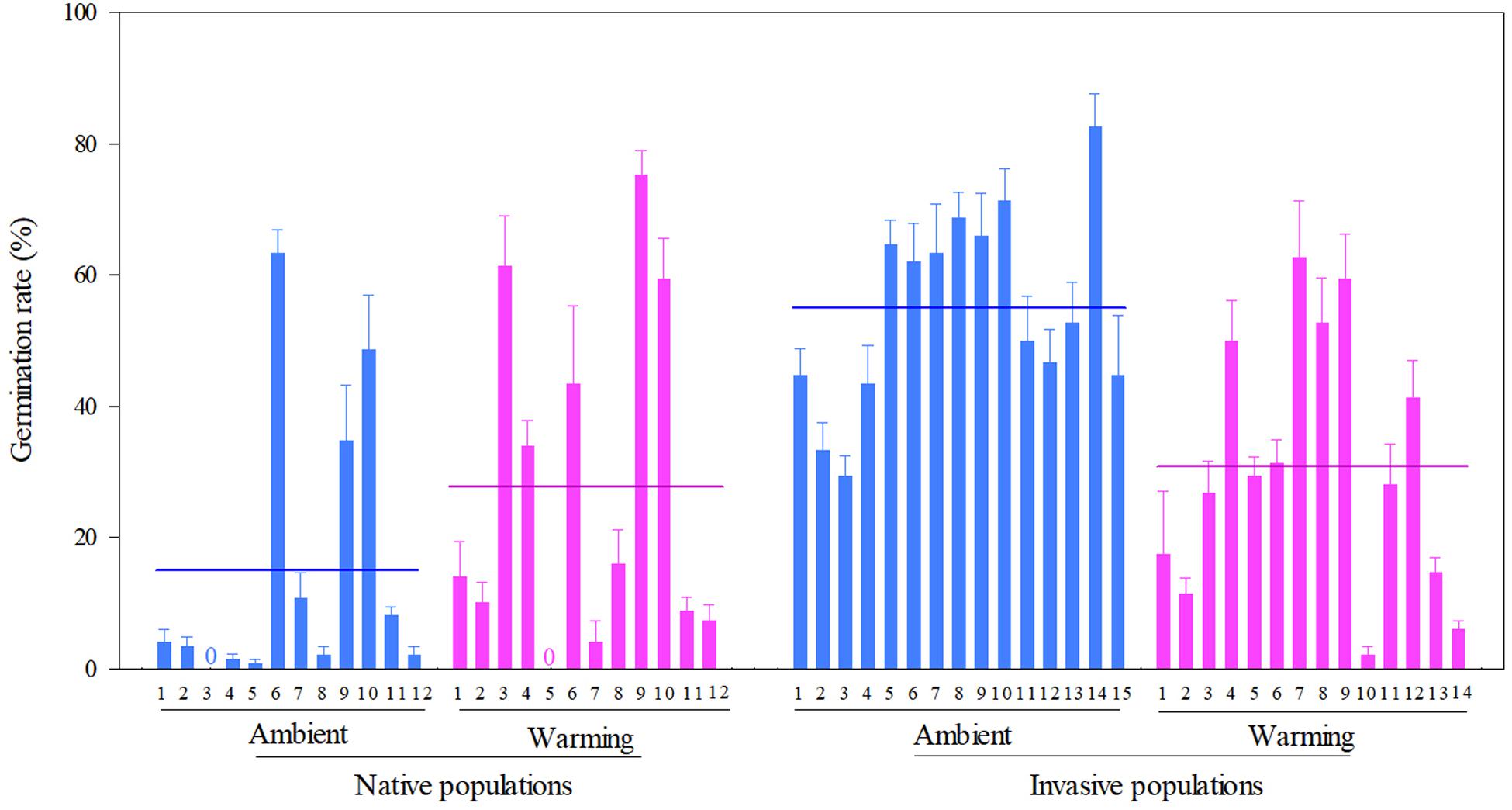 The first key finding of our study was that 5-year continued warming (increasing air temperatures by approximately 2°C), as an environmental cue, yielded more positive effects on the seed germination of S. canadensis from its native but not introduced range. In our recent study, Peng et al. (2019) found that native S. canadensis populations were more sensitive to climate warming and nitrogen deposition than invasive populations in terms of leaf traits, ramet growth, and phenological sequences. It is noteworthy that warming effects were not directional: warming decreased the seed mass of native populations but enhanced their seed germination. Similar phenomena have been detected in our previous studies. For example, the competitive ability of C. maculosa populations from an invaded range was greater than that of C. maculosa populations from a native range under the ambient, but this competitive ability followed the opposite direction under the warming (He et al., 2012). Thus, our finding partly supports the hypothesis of climate-of-origin (Drake et al., 2015) and our central hypothesis.

The pattern that native S. canadensis populations benefited more from climate warming than invasive S. canadensis populations might be linked to climate-of-provenance (Drake et al., 2015). For example, the growth of two widely distributed Eucalyptus species originating in a cooler climate (i.e., temperate climate) was enhanced due to climate warming through physiological acclimation, whereas the opposite was the case for Eucalyptus species originating in a warmer climate (i.e., tropical climate) (Drake et al., 2015). Similarly, S. canadensis is native to temperate North America (Werner et al., 1980), where air temperature is lower compared to invaded subtropical areas (Table 1). Thus, the same rising temperature may yield contrasting thermal consequences for plant populations and seeds in temperate and subtropical climates (Fenner and Thompson, 2006). On the other hand, the experience of populations might also matter in response to climate warming. Evidence is accumulating that the experience of plants strongly influences their responses to the surrounding environments (Kohl and Dearing, 2012; Sun and He, 2018). Since native and invasive S. canadensis populations grew in different climatic conditions (Table 1), they had contrasting experience, thereby influencing their sensitivity to climate warming.

Seed quality and seed germination are among the most important characteristics of plant sexual propagules (Harper, 2010), and thus contribute to invasion success (Baker, 1965; Alpert et al., 2000; Richardson and Pyšek, 2006; Lockwood et al., 2013). The findings from this experiment and our previous experiments (Peng et al., 2018, 2019) suggest that invasive populations may be more successful than native populations due to rapid evolution. Accordingly, invasive populations seem to have greater risks than native populations. Additionally, our findings might help us to understand why S. canadensis is mainly restricted to local patches in its native range (Werner et al., 1980) and widespread in invaded southern China (Dong et al., 2015).

The datasets presented in this article are not readily available because the work is part of our project. Requests to access the datasets should be directed to W-MH, Weiminghe@ibcas.ac.cn.

X-HZ and W-MH conceived and designed the study, analyzed the data, and wrote the manuscript. X-HZ performed the experiment. Both authors contributed to the article and approved the submitted version.

This work was supported by the National Natural Science Foundation of China (31971552).

Copyright © 2020 Zhou and He. This is an open-access article distributed under the terms of the Creative Commons Attribution License (CC BY). The use, distribution or reproduction in other forums is permitted, provided the original author(s) and the copyright owner(s) are credited and that the original publication in this journal is cited, in accordance with accepted academic practice. No use, distribution or reproduction is permitted which does not comply with these terms.