A Commentary on
Commentary: Strontium Is Released Rapidly From Agricultural Lime-Implications for Provenance and Migration Studies

Frei's comment Frei (2021) argues that we selected an inappropriate mass balancing method in our paper (Andreasen and Thomsen, 2021), and that our conclusions therefore are unsupported. We maintain that our mass balance and our conclusions are sound.

By contrast, Frei's comment Frei (2021) and Frei et al. (2020) present mass balances of the strontium inventory of the soil vs. the estimated total of added strontium over the period the soil has been farmed—~100 years. The drawbacks of this approach are that accurate records of the timing and amount of added lime and fertilizer do not go back that far, and the amount of bioavailable strontium in the soil at the onset of farming is unknown.

In the calculations presented in Frei's comment, it is assumed that the lime added to the soil during the liming experiment in 2012–2013 was dolomitic lime, as was the lime added during the ~100 years of farming before. This assumption is incorrect. The lime added during the liming experiment is calcitic chalk (Jessen et al., 2014), and remaining pieces from Profile B contain ~1,000 ppm strontium. Further, the landowner states that he has never used dolomitic limestone in the field; and as dolomite outcrops do not exist in Denmark and did not become available to farmers commercially until ~1995, it is highly unlikely that dolomite has ever been added to the soil. The bioavailable Mg/Ca value of 0.04 in Profile C (2014), which the comment suggests indicates the use of dolomite is exactly the same as the bioavailable Mg/Ca in farmland profiles A and F and lower than in heathland profile N, and is thus unrelated to liming. The main source of magnesium in farmland is manure. Cattle and pig manure, commonly used in the area, have Mg/Ca ratios of ~0.5 (Sager, 2007).

Another problem with Frei's calculations is that these assume there was no bioavailable strontium in the soil when farming commenced. This is clearly incorrect. Our studies of heathland soils of similar thickness from the area suggest natural bioavailable strontium levels of 1.2–1.4 g/m2 in the unlimed organic-rich top layers of the soil. Finally, Frei's calculations assume that agricultural lime is the only source of strontium added to the soil. Whereas, agricultural lime is the main contributor of anthropogenic strontium to the soil, it is not the only one. Significant levels of strontium added to this type of soil (~20% of the total) come from the use of manure and fertilizers (Thomsen and Andreasen, 2019). Ignoring this leads to further underestimating the amount of strontium added to the soil, over the time it has been farmed.

In Figure 1, we present models of a hypothetical soil profile, based on Frei's and our assumptions, which accounts for these factors. These assume that agricultural lime is added every 4 years, manure and fertilizer, every year, and strontium is removed via crop yield every year. The primary assumption of the model presented in Frei et al. (2020) and in the comment is that there is no release of strontium from the topsoil, leading to a steady increase in strontium content forever (Figure 1A). By contrast, the empirically-derived models of Thomsen and Andreasen (2019) and Andreasen and Thomsen (2021) account for the removal of strontium through the vadose zone to the groundwater, resulting in a much slower rate of accumulation of strontium in the top soil (Figure 1A). The green bar shown at present day in Figure 1A, indicates the range of strontium levels measured in farmland Profiles A and F—the bioavailable strontium (ammonium nitrate extract) and bioavailable + acetic acid extract, which were taken from separate aliquots. The latter value is thus an overestimation of the total level, as some strontium is extracted in both aliquots, and so is counted twice, and serves as an estimate of the maximum possible strontium level. It is clear that Frei's model overshoots the strontium levels measured in the soils, where appropriate input parameters are used. By contrast, our model matches the observed levels of bioavailable strontium, resulting in an 85% loss of strontium from agricultural lime to ground water. Likewise, Frei's model is unable to reproduce the observed strongly lime-dominated 87Sr/86Sr ratios measured in the soil (Figure 1B) as our model does. With loss, the strontium isotopic composition quickly becomes lime-dominated despite the lower strontium content. 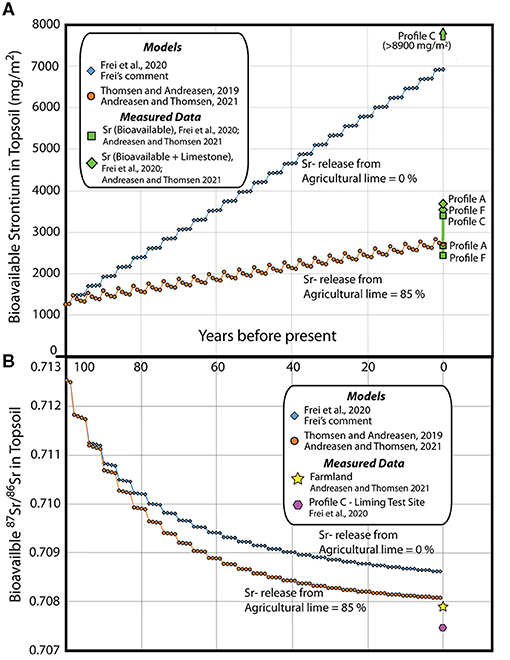 Figure 1. Calculation of Sr content (A) and Sr isotopic composition (B) in the topsoil of a hypothetical soil profile where modern farming commenced 100 years ago, using the model presented by Frei et al. (2020) and Frei (2021) (blue diamonds) with complete Sr retention and the model with very limited retention presented by Thomsen and Andreasen (2019) and Andreasen and Thomsen (2021) (orange circles). Agricultural lime (2 t/ha) is added every 4 years, manure and fertilizer every year, removal of Sr through crop yield is yearly. For the sake of simplicity and modeling general behavior, soil use remains constant over the entire period. The starting value of 1,250 mg/m2 is based on unlimited heathland samples in the area of the sites studied in Andreasen and Thomsen (2021), as is the starting 87Sr/86Sr ratio. Parameters for farming are from Thomsen and Andreasen (2019). Measured levels of bioavailable strontium (ammonium nitrate extract) in the topsoil are shown in (A) as green squares and bioavailable + limestone (ammonium nitrate + acetic acid extracts) as green diamonds [Frei et al., 2020 (Liming Test Site, Profile C); Andreasen and Thomsen, 2021 (Farmland, Profiles A and F)]. Measured strontium isotopic values for farmland (Andreasen and Thomsen, 2021) and Profile C, the liming test site (Frei et al., 2020) are shown as a yellow star and purple hexagon, respectively in (B).

Most significantly, however, we wish to state that we agree with this comment's assessment that “profile C, likewise profile B, with a similarly extreme over-liming are not representative of common farmland agricultural liming practice.” This is the very reason why these samples, obtained 6 months after the test site had received 36 T/ha of agricultural lime should not have been used by the same author, for a study described as having “investigated a soil profile from farmland that experienced long-term liming,” and which concludes that “strontium added via agricultural liming in a representative site in the West Jutland sandy outwash plain is efficiently retained” (Frei et al., 2020).

We concur with the comment that the archeological community is poorly served by the debate regarding strontium mobility. Fortunately, independent research has also reached the conclusion that anthropogenic strontium is problematic (e.g., Seltzer et al., 2021; Zieliński et al., 2021), such that this topic is no longer one for debate.

RA made the calculations for the models and prepared the first draft of the manuscript. ET spoke with the farmer and agricultural lime supplier about framing and liming practices. Both authors contributed to the interpretations, the manuscript, and approved the submitted version.

Conversations with landowner Johan Mølby on farming practices are greatly appreciated, as is clarification on the use of agricultural lime, magnesium lime, and dolomitic lime in Denmark from Jens Søndergaard of DanKalk, Aggersund. The authors are grateful to Erin J. Rosenberg, who improved the manuscript.

Copyright © 2021 Andreasen and Thomsen. This is an open-access article distributed under the terms of the Creative Commons Attribution License (CC BY). The use, distribution or reproduction in other forums is permitted, provided the original author(s) and the copyright owner(s) are credited and that the original publication in this journal is cited, in accordance with accepted academic practice. No use, distribution or reproduction is permitted which does not comply with these terms.