The current vaccine prophylaxis deployed globally is perhaps the most important factor in social protection and economic recovery against the COVID-19 pandemic. Vaccine effectiveness against the new emerging SARS-CoV-2 variants is a challenging issue in the control of this new epidemic (1). All licensed formulations are based on the original D614 spike protein sequence of the Wuhan-1 wild-type strain. However, in these almost 2 years of epidemic, where SARS-CoV-2 has gone from being a local pathogen to a global pandemic, the evolutionary pressure is generating an increased number of novel variants and sub-variants (2). Changes in the amino acid sequence of the SARS-CoV-2 spike protein present in these new viruses may affect several stages of the replicative cycle of the virus and/or efficacy of the humoral and/or cellular immune responses. Strong activation of the three arms of adaptive immunity—neutralizing antibodies, helper CD4+ T lymphocytes, and cytotoxic CD8+ T lymphocytes—are relevant after both SARS-CoV-2 natural infection and vaccination (3). Changes in the spike protein between new SARS-CoV-2 variants compared to Wuhan-1 wild-type strain included in current formulations in use can lead to the selection of escape mutant, which reduce or even eliminate one, several, or even all three arms of the adaptive immune response against this pandemic virus. In the last weeks, the heavily mutated SARS-CoV-2 B1.1.529 variant of concern (Omicron) seems to be spreading quickly across first South Africa and now to the rest of the world, raising doubts about vaccine efficacy.

The exquisite interaction of the receptor of the CD8+ or CD4+ T helper lymphocytes with pathogen peptides bound to HLA class I or II molecules not only triggers the activity of these T cells, but also initiates, regulates, or suppresses the other components of the adaptive immune responses. In absence of appropriate HLA class I- and II-restricted T-cell recognition, both cellular and humoral immune responses cannot be efficiently activated, and thus, the infective virus could spread within the whole organism with fatal results for the host. This whole highly complex set of immune events can be altered, or even suppressed by single changes in the virus epitope sequences that lead to a complete loss of antigen recognition. This extremely low tolerance to amino acid changes in the antigen recognition can favor epitope escape at the T-cell level, rendering ineffective the lymphocytes previously activated by the administration of vaccines. Thereby, confirmed cases of re-infection associated with different viral genotypes were detected at the beginning of the pandemic (4), and re-infection of immunized individuals by mutational evasion is common in other RNA viruses such as influenza (5).

Altogether, the analysis of the influence of mismatches between the immune response elicited by currently licensed vaccines and emerging SARS-CoV-2 variants is of primary importance. In this study, we have approached this aspect focused on the cytotoxic and helper immune responses against the last new SARS-CoV-2 B1.1.529 variant of concern (Omicron). Although some HLA supertype-dependent differences in the predicted quality of cytotoxic, but not of helper, protection against this strain of concern was observed, this effect is still very minor compared to the global cytotoxic and helper responses elicited with current licensed vaccines.

In contrast to the study of humoral immune response when the escape mutants affecting the antibody response can be carried out experimentally, the impressive degree of HLA class I and II polymorphism distributed in the human population, with at least 24,000 and 8,000 alleles identified to date respectively, can only be approached bioinformatically. However, many HLA class I and II molecules identified have been grouped first in families, later in superfamilies, and finally in twelve and ten canonical HLA class I and II types, respectively, sharing strong similarities at the peptide–ligand specificity level, termed supertypes, that cover >90% of the world population regardless of ethnicity (7–9). These 551 or 41 HLA class I or II alleles experimentally shared the same motifs within their respective supertype showing exact matches for residues at the specific pockets of the HLA molecule. While thousands and thousands of HLA class I and class II alleles have been reported (10), the utilization of supertypes significantly reduces data complexity and facilitates herd immunity analysis. Thus, the first computational prediction to the theoretical epitopes from the SARS-CoV-2 spike protein, the only protein included in internationally licensed vaccines, was carried out. These epitopes could be presented by each of the 551 HLA class I or 41 HLA class II alleles associated to the twelve or ten canonical HLA class I and II supertypes, respectively. The latest versions of the universal and neural network-based netMHCpan EL and BA algorithms were utilized, which outperforms any other method so far (6) and are recommended by the central Immune Epitope Database and Analysis Resource (11).

Predicted ligands for most HLA-A class I supertype molecules ranged by a few tens per allele except in the A0103 supertype with less than 9 epitopes per allele (Figure 1A; Table 1, and Supplemental Table 1). This supertype besides some individual alleles of other HLA-A supertypes that also showed low predicted epitope binding (Figure 1) would be candidates to be affected by escape mutants within SARS-CoV-2 variants. The influence of SARS-CoV-2 B1.1.529 variant of concern (Omicron), which is spreading rapidly against a backdrop of ongoing Delta-variant transmission and shows multiple mutations in the spike protein, in the vaccine-derived immunity is currently cause for much speculation and even alarm worldwide. Thus, a predictive analysis of the impact of mutations described in the Omicron variant of concern over the HLA-A class I supertypes was carried out. 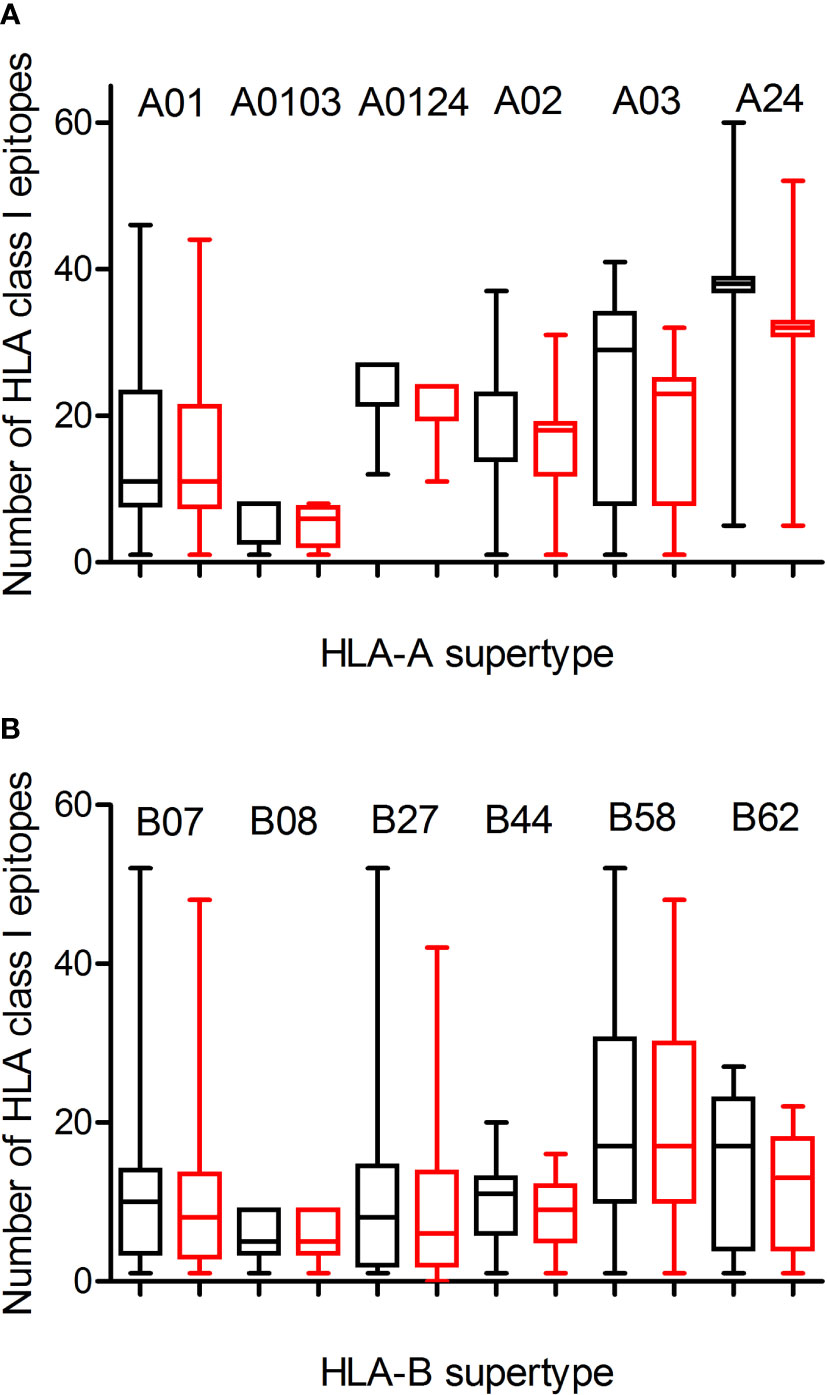 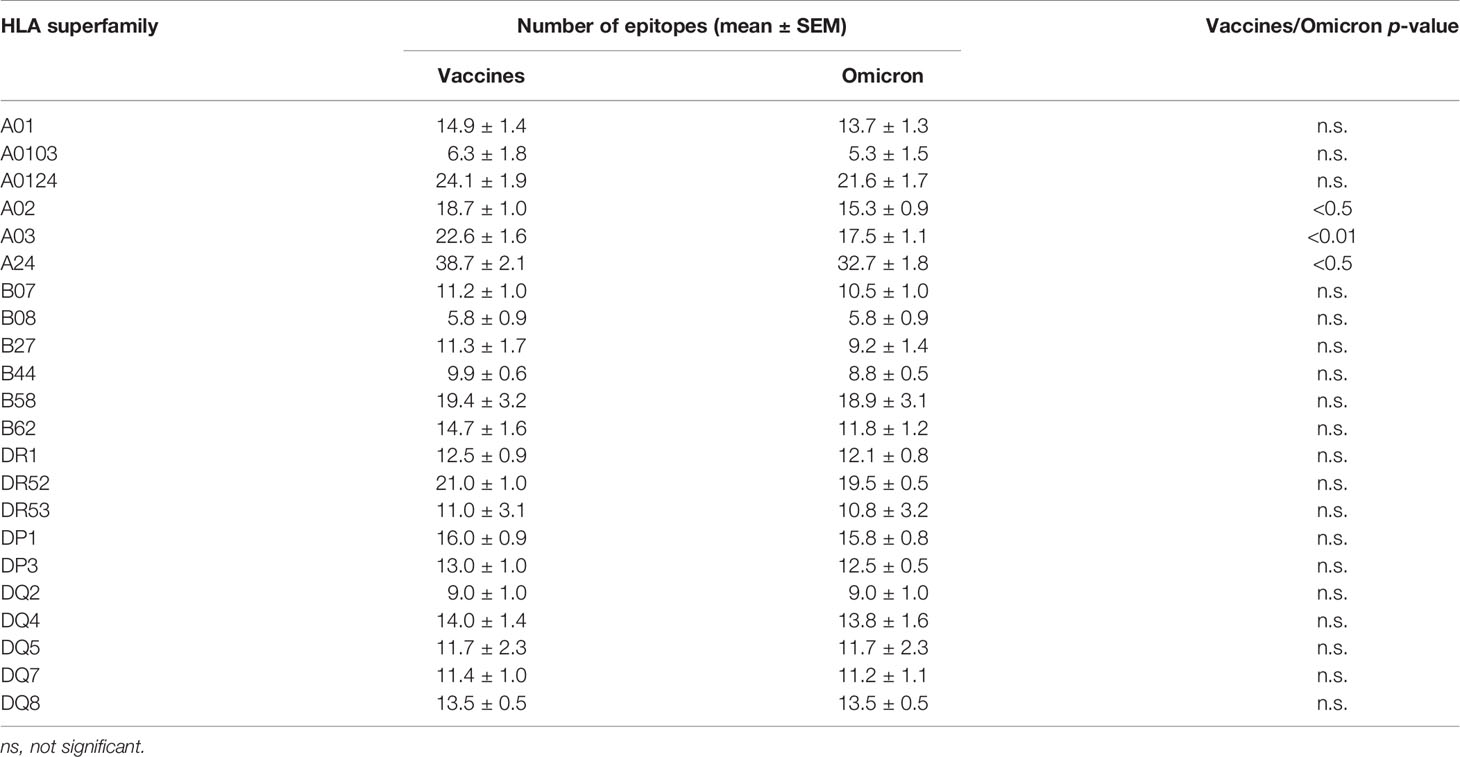 Table 1 Summary of average number of epitopes in the Wuhan-1 and Omicron spike protein sequences predicted for HLA class I and II alleles including in the 12 and 10 HLA class I or class II supertypes, resepctively.

The changes in the Omicron variant of concern generated little loss of HLA-A-restricted epitopes derived from SARS-CoV-2 vaccines in the protein spike. In the A01, A0103, and A0124 supertypes the average escape epitope rate was not statistically significant with a loss of only 1-2 epitopes by allele on average (Figure 1A and Table 1). In contrast, for the A02, A03, and A24 supertypes the differences were statistically significant with between 3 and 5 epitopes by allele on average mutated on Omicron variant of concern, although most epitopes presented by these HLA-A alleles remained conserved between both virus strains (Figure 1A; Table 1, and Supplementary Table 1). In addition, none of HLA-A class I alleles from all supertypes with low number of predicted epitopes in the vaccine sequence was affected by the Omicron sequence. For example, for 8 alleles from HLA-A*03 family (A03 supertype) the predicted epitopes in the Wuhan-1 wild-type strain ranging 1-4 peptides were all conserved in the Omicron sequence. 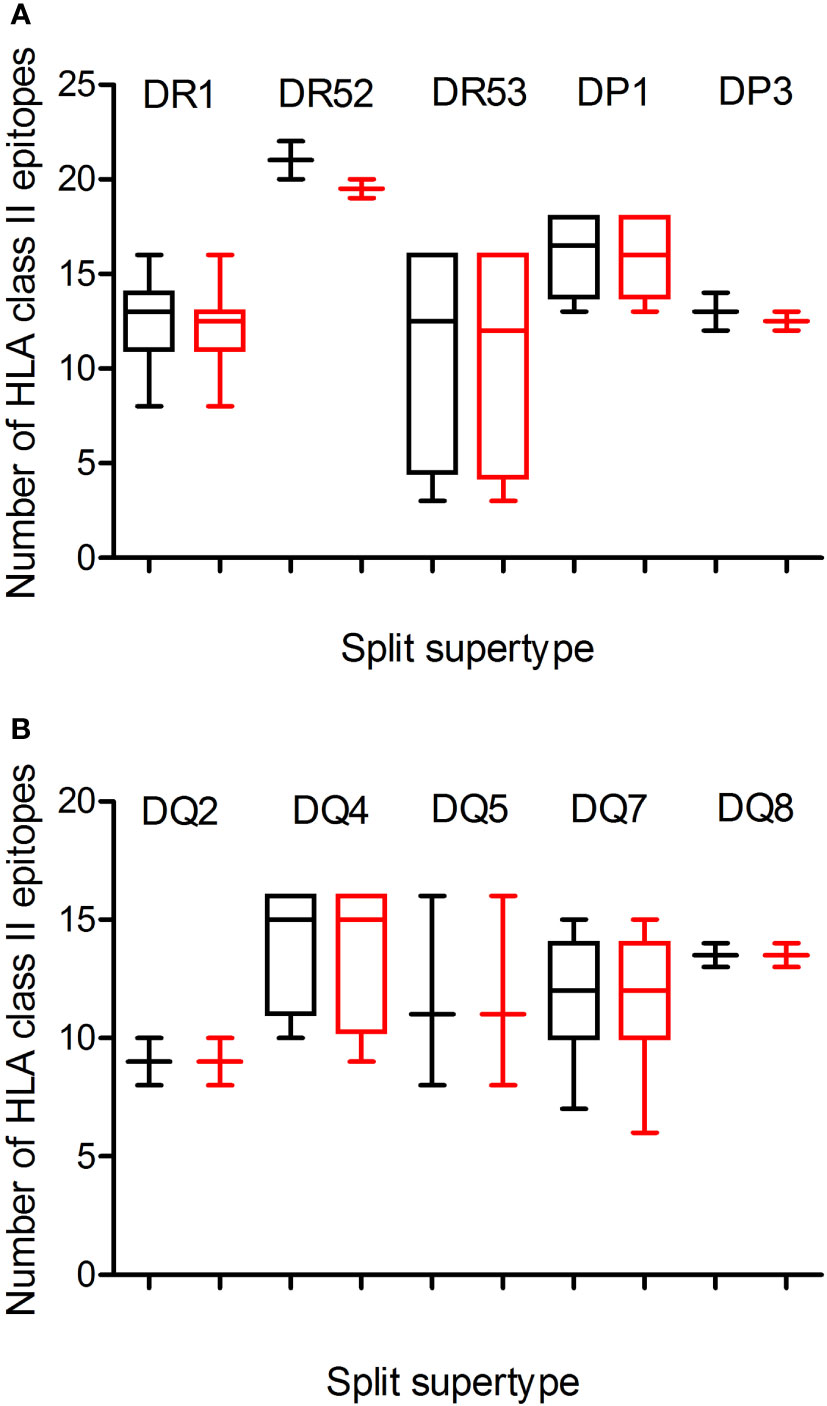 Figure 2 Average number of epitopes in the Wuhan-1 and Omicron spike protein sequences predicted for HLA class II alleles including in the 10 HLA class II supertypes. The median value is indicated. Box limits indicate the interquartile range. Whiskers are adjusted to maximal and minimal values. The number of epitopes in the Wuhan-1 (black) and Omicron (red) strains predicted for HLA class I alleles including in the 3 HLA-DR and -DP or 5-DQ supertypes are depicted in panels (A, B), respectively.

In our previous study about the effect of emerging SARS-CoV-2 variants identified to May 2021 on cytotoxic T-cell response generated by the licensed vaccines, a prediction of the number of intact epitopes for some representative alleles of the twelve HLA class I supertypes was calculated after random progressive position sets ranging from the length of the full spike protein (12). In this hypothetical scenario, 39 random mutations in the spike protein sequence did not prevent the fact that the 75% of predicted cytotoxic epitopes derived from SARS-CoV-2 vaccines remained unaltered (12). In the real scenario analyzed in the current study, the 30 changes, 3 deletions, and 1 insertion generated by the Omicron variant of concern versus current SARS-CoV-2 vaccines, only with the A03 supertype was a similar (26%) escape mutation rate found. A02 was the second supertype affected (21%), while in the other 10 HLA class I supertypes, this rate was less than 20%, resulting in a 12% escape mutation rate on average for the 12 HLA class I supertypes analyzed, less than half of the theoretical rate calculated by random mutation (12). B58, with only 2% altered epitopes, and B08 without predicted epitopes modified in Omicron strain versus SARS-CoV-2 vaccines were the HLA class I supertypes least impacted by the Omicron variant of concern. The changes in this new SARS-CoV-2 variant are not randomly distributed, but many of them are usually very close to each other, i.e., A67V and Δ69-70; G142D and Δ143-145; L212I and ins214EPE; S371L, S373P, and S375F; S477N, T478K, and E484A; and especially Q493R, G496S, Q498R, N501Y, and Y505H changes. Thus, the destructive effect of these mutations was concentrated on a small number of epitopes, leaving very large regions of the spike protein unchanged. In this context, currently 1,312 experimentally detected epitopes restricted by HLA class I and II have been identified [Immune Epitope Database and Analysis Resource (11)]. Of these, only 125 (9%) were modified by the Omicron variant of concern (Supplemental Table 3). Therefore, most HLA class I- and II-restricted peptides remain preserved. In addition, in the hypothetical scenario using random progressive mutation on SARS-CoV-2 spike protein previously described (12), an average of 81 mutations were necessary to destroy half of the predicted CD8+ T-cell epitopes generated by vaccination and restricted by all HLA class I supertypes. Thus, taking into account the above, it is probable that the impact of 80 mutations in the spike protein screened by natural selection was far less disruptive than the hypothetical scenario, and still, most HLA class I- and II-restricted peptides of multiple HLA supertypes remain preserved. This implies that for current vaccines to lose efficacy with respect to cellular immunity against new SARS-CoV-2 variants, they should accumulate many more mutations in the spike protein, and that these changes should also be distributed throughout the protein sequence derived from licensed vaccines. Therefore, since generally SARS-CoV-2 mutations (as in many other viruses) are associated with selection by factors such as interaction with cell receptor or transmissibility, as suggested by epidemiological data for the principal strains of concern (13–15), it appears unlikely that the simple accumulation of other new several dozen more mutations in the spike protein per se will achieve critical mass in a reasonable time to allow either cytotoxic or helper immune evasion for most HLA class I and/or class II alleles, making current licensed vaccines ineffective. In addition, the HLA polymorphism is widely distributed in the human population with few inbred groups, generally aborigines living in remote regions with little contact with the outside world. Thus, the immune pressure so that omicron or any other new variant that may appear in the future could develop a sufficient number of escape mutants to evade the cellular immune response generated by current vaccines is very low.

All contributions have been made by DL.

This research was supported by grant MPY 388/18 of “Acción Estratégica en Salud” from the ISCIII.

The Supplementary Material for this article can be found online at: https://www.frontiersin.org/articles/10.3389/fimmu.2022.832889/full#supplementary-material

Copyright © 2022 López. This is an open-access article distributed under the terms of the Creative Commons Attribution License (CC BY). The use, distribution or reproduction in other forums is permitted, provided the original author(s) and the copyright owner(s) are credited and that the original publication in this journal is cited, in accordance with accepted academic practice. No use, distribution or reproduction is permitted which does not comply with these terms.