Prima-1Met (APR-246) was previously shown to be dependent on glutathione inhibition and on ROS induction in cancer cells with mutated or deleted TP53. Because this ROS induction was, at least in part, due to a direct interference with the thioredoxin reductase enzyme, we investigated whether activity of Prima-1Met could be mimicked by auranofin, an inhibitor of the thioredoxin reductase. We thus compared the activity of auranofin and Prima-1Met in 18 myeloma cell lines and in 10 samples from patients with multiple myeloma or plasma cell leukemia. We showed that, similar to Prima-1Met, the activity of auranofin was not dependent on either TP53 status or p53 expression; was inhibited by N-acetyl-L-cysteine, a ROS scavenger; displayed a dramatic synergy with L-buthionine sulfoximine, an irreversible inhibitor of glutathione synthesis; and induced cell death that was not dependent on Bax/Bak expression. These data showed that auranofin and Prima-1Met similarly overcome cell death resistance in myeloma cells due to either p53 deficiency or to mitochondrial dysfunction.

Mutations and/or deletions of TP53 are associated with resistance to treatments in multiple myeloma as in most B-cell malignancies (1). TP53 mutation and deletion are associated in B-cell malignancies suggesting that bi-allelic alterations of TP53 are involved in resistance, although overall survival of patients with lymphoma or myeloma appears more significantly related to mutations than to deletion (2, 3). Mutations of TP53 induced a more rapid development of spontaneous tumors than the deletion of TP53 (4). Moreover, some mutations are characterized by a gain of function, making mutant forms of the p53 protein interesting therapeutic targets (5). Given the importance of folding for p53 activity and the existence of temperature-dependent mutations, chemical molecules able to change the conformation of p53 and to restore its transcriptional activity were screened (6). During the last 15 years, several molecules were isolated for their efficacy to induce cell death in TP53 mutated cells and some of these molecules were shown to interact with the mutant p53 protein (7, 8). However, the p53 dependency of several p53 reactivating molecules, such as RITA and Prima-1Met, is debated as both drugs killed cancer cells independently from TP53 status and p53 expression (9, 10). Indeed, it was recently demonstrated using CRISPR/Cas9 technology that the cell response to RITA, which is a DNA damaging drug, depended on FANCD2 expression (11). On the other hand, Prima-1Met has been shown to decrease glutathione and to induce ROS independently from p53 expression or mutations (10, 12, 13), at least by directly interfering with thioredoxin reductase, a central enzyme of the detoxifying redox pathway (14). These results prompted us to further investigate whether auranofin, an inhibitor of the thioredoxin reductase, displayed a Prima-1Met-like activity. We therefore investigated activity and death mechanism of auranofin in myeloma cell lines and primary myeloma cells characterized for TP53 status. We showed that activity of auranofin and Prima-1Met correlated in myeloma cells and that both drugs induced a Bax/Bak-independent cell death.

Eighteen HMCLs used for this study, i.e., 7 HMCLs with a wild-type TP53 status (MDN, NCI-H929, NAN9, NAN11, XG3, XG6, XG7), 8 HMCLs with a missense TP53 mutation (JIM3, KMS12PE, LP1, NAN10, OPM2, U266, XG2, XG5) and 3 HMCLs with a TP53 indel leading to the lack of mRNA and/or protein expression (JJN3, L363, NAN7). All HMCLs have been extensively characterized (10, 15, 16). TP53 status was performed by direct sequencing of RT-PCR products (16) and by whole exon sequencing (17). After obtaining informed consent, blood or bone marrow samples from patients with MM were collected at the Department of Hematology of the Nantes University Hospital (MYRACLE cohort, ethical approval NCT03807128, Benaniba et al., submitted). Plasma cells were obtained after gradient density centrifugation and FISH was performed as previously described (9, 18).

The cell lines or mononuclear cells from patients' samples (500,000 cells/ml) were incubated with Prima-1Met or auranofin with different concentrations as indicated within the legends of the figures. Cell death was assessed by Annexin V staining in cell lines and by the loss of CD138 staining in primary myeloma cells (10, 19–21). The fluorescence acquisition and analysis were performed using a FACsCalibur with Cell Quest (Becton Dickinson) or FlowJo (Ashland, OR, USA) software, Cytocell core facility (SFR Bonamy, Nantes, France).

Sensitivity of Myeloma Cell Lines to Prima-1Met and Auranofin Correlated

We assessed the efficacy of auranofin, an inhibitor of thioredoxin reductase, in comparison with Prima-1Met in 18 HMCLs. We determined the lethal dose 50 (LD50) of auranofin and Prima-1Met to HMCLs using Annexin V staining at day 2, as illustrated in Figure 1A. Figure 1B (left panel) shows a positive correlation between LD50 values for auranofin and Prima-1Met (p = 0.042, r2 = 0.2327, Pearson test); however, auranofin displayed higher activity (about 80-fold) compared to Prima-1Met (median values were 0.4 and 32.5 μM, respectively). Notably, the correlation was essentially supported by HMCLs displaying abnormal TP53 status (Figure 1B, middle and right panels, Pearson test), although activity of auranofin and Prima-1Met was not dependent on p53 mutations or expression (Figure 1C). Using the CellMinerCDB portal (https://discover.nci.nih.gov/cellminercdb/), which provides pharmacologic sensitivity of cancer cell lines, we confirmed that activity of another inhibitor of the thioredoxin reductase (PX-12) also correlated with activity of Prima-1Met in myeloma cell lines (Figure S1). 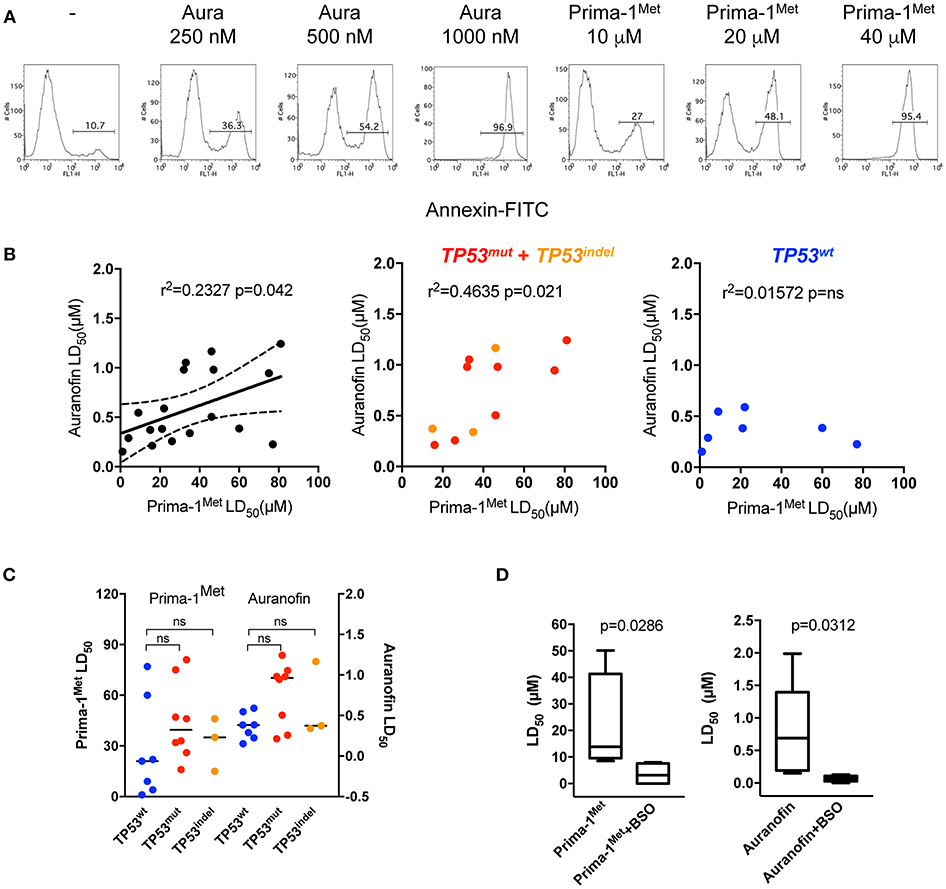 We previously demonstrated that Prima-1Met induced ROS-dependent cell death in myeloma cells that was prevented by N-acetyl-L-cysteine (NAC) (10). Because auranofin has been shown to induce ROS production, we thus assessed whether NAC was also able to inhibit cell death induced by auranofin (22). As shown in Figure 2A in L363 and OPM2, the addition of NAC inhibited cell death induced by auranofin and Prima-1Met by 86% (p = 0.03) and 95% (p = 0.03), respectively. Prima-1Met was shown to induce apoptosis that was independent from Bax/Bak: Prima-1Met induced lipid peroxidation that mediated mitochondrial permeabilization, cytochrome C release and activation of caspases (13). To determine the role of Bax/Bak in auranofin-induced cell death, we performed BAX/BAK1 silencing in LP1 cells. A decrease in Bax or Bak expression did not significantly modify cell responses to either drug (Figure 2B). Moreover, the venetoclax-resistant XG5-199R HMCL, in which the expression of both apoptosis executors was lost, remained as sensitive as the parental XG5 cell line to both drugs (Figure 2C) (23). These results showed that auranofin and Prima-1Met induced ROS-dependent, Bax/Bak-independent cell death. 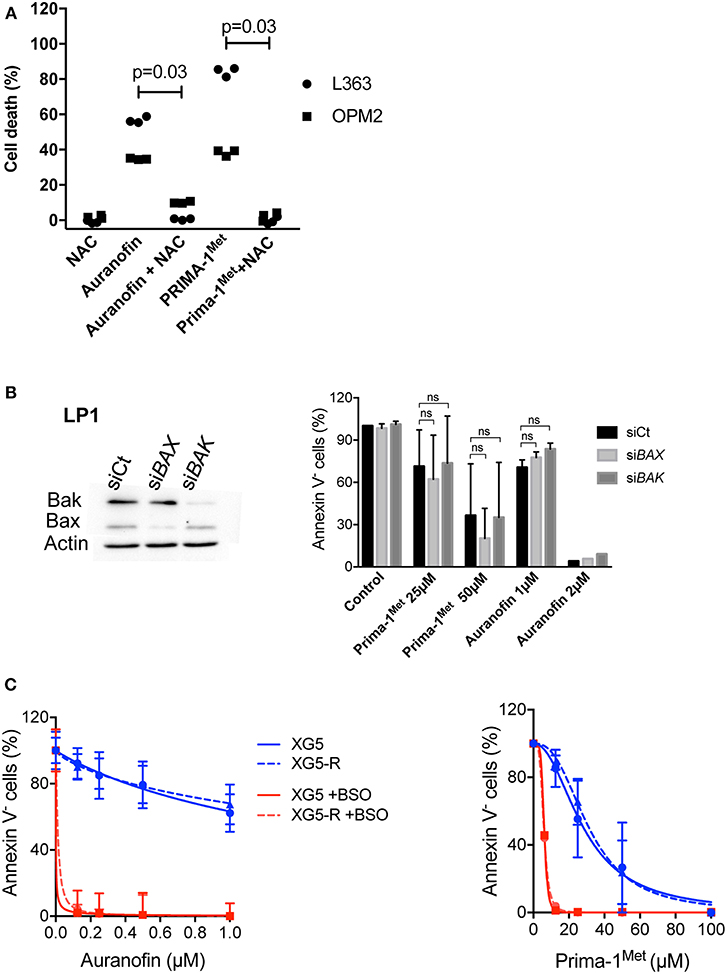 Sensitivity of Primary Myeloma Cells to Prima-1Met and Auranofin Correlated 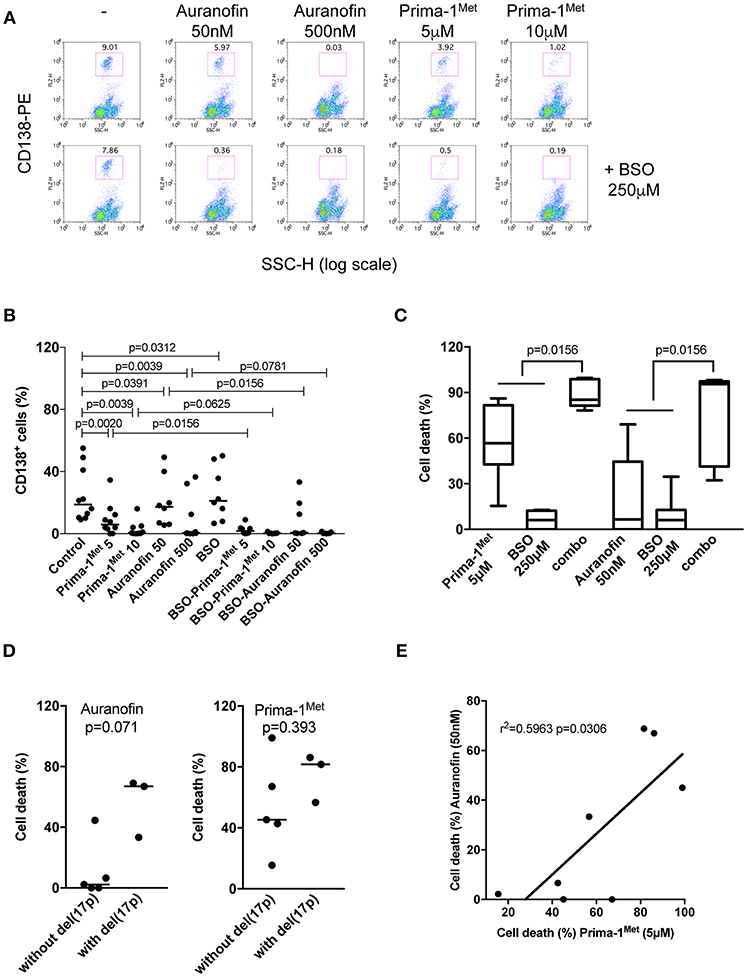 In this paper, we showed that the sensitivity of myeloma cells to auranofin correlated with sensitivity to Prima-1Met in both HMCLs and in primary myeloma cells from patients with MM or PCL, and that auranofin was more efficient than Prima-1Met. Although p53 competent HMCLs were very sensitive to both drugs, the activity of Prima-1Met or auranofin was not dependent on TP53 status, highlighting that targeting the ROS/GSH pathway was efficient in cells expressing mutant p53 protein or lacking p53 expression. Prima-1Met and auranofin induced Bak/Bax-independent cell death and were efficient in myeloma cells resistant to the Bcl2-specific BH3-mimetic venetoclax. These data showed that auranofin, as Prima-1Met, overcomes resistance to cell death mediated by either p53 deficiency or by mitochondrial loss of priming in myeloma cells. Both drugs appear thus of particular interest for resistance in vivo. Prima-1Met (APR-246) is under clinical evaluation in ovarian cancers with mutated TP53 or in refractory (TP53-mutated) myeloid neoplasms, alone or in combination. Auranofin, which was used to treat patients with arthritis, was recently shown to be able to eliminate side populations and to enhance ibrutinib efficacy in solid cancer cells (22, 24). These recent findings are in favor of assessing auranofin in myeloma patients resistant to current therapies as well as resistant to the Bcl2-specific BH3 mimetic venetoclax.

The Supplementary Material for this article can be found online at: https://www.frontiersin.org/articles/10.3389/fonc.2019.00128/full#supplementary-material

Copyright © 2019 Tessoulin, Descamps, Dousset, Amiot and Pellat-Deceunynck. This is an open-access article distributed under the terms of the Creative Commons Attribution License (CC BY). The use, distribution or reproduction in other forums is permitted, provided the original author(s) and the copyright owner(s) are credited and that the original publication in this journal is cited, in accordance with accepted academic practice. No use, distribution or reproduction is permitted which does not comply with these terms.