The matrix detachment was done in cell suspension culture. 1 × 106 cells were cultured in ultra-low attachment plate (14) for at 37°C for various time points, which results in formation of spheroids. The spheroids were treated with either vehicle control or with different concentration of compound-C (sigma- P5499) for 5 days. The images were captured by using Nikon (USA) inverted light microscope. Images were analyzed for size measurement using image J software (https://imagej.net/Invasion_assay).

The apoptosis was detected by using Annexin V-FITC labelled and propidium iodide followed by a flow cytometer. The cells were grown in an ultra-low attachment plate for 6 days with and without treatment with Compound C. After treatment spheroids are harvested and washed with PBS (ice cold) three times. The spheroids were breakdown by multiple pipetting and resuspended in 100 μl 1X binding buffer and 10 μl Annexin V-FITC and 5 μl PI. After incubation for 20 min in RT (dark condition). The cells were analyzed by flow The Guava® easyCyte 5 Flow Cytometer, and the percentage of cells went apoptosis was calculated (15).

Metabolites were extracted from ECM attached and detached cells and detached cells were treated with dorsomorphin (Compound C, Sigma P5499).ECM detached spheroids were collected and crushed immediately using tissue homogenizer using a combination of ice-cold methanol: acetonitrile: water at a ratio of (2:1:1 v/v) and vortexed for 30s and incubated for 60 min at −20°C, and spin for 15 min at 13,000 rpm at 4°C.

The supernatant was collected, dried in a vacuum concentrator, and reconstituted in 200 µl of acetonitrile in 0.1% formic acid, vortexed for 5 min and centrifuge for 10 min at 13,000 rpm at 4°C. Finally, the samples were taken for LC-MS/MS analysis (15–17).

Briefly, RNA was extracted from all the cell lines at the end of different experimental conditions by using RNeasy kit (Qiagen), and reverse transcribed a High capacity cDNA Reverse Transcription kit (applied biosystems). cDNA (1–100 ng) was amplified in triplicate using gene specific primers (Supplementary Table 2). Threshold cycle (CT) values obtained from the instrument’s software were used to calculate the fold change of the respective mRNAs. ΔCT was calculated by subtracting the CT value of the housekeeping gene from that of the mRNA of interest. ΔΔCT for each mRNA was then calculated by subtracting the CT value of the control from the experimental value. Fold change was calculated by the formula 2−ΔΔCT.

Various cancer cells (HCT116 and 22RV1) were cultured in T75 flask (1 × 106/flask). After 24 h cells of cell plating in ultra-low attachment plates cells were treated with Compound C for indicated dose for consecutive 5 days. The fresh treatment was added every 48 h, following completion of treatment, media was aspirated and cells were washed with cold PBS (pH 7.4) and pelleted in 15ml falcon tubes. Ice-cold lysis buffer (RIPA buffer) was added to the pellet, with freshly added protease inhibitor cocktail (Protease Inhibitor Cocktail Set III, Calbiochem, La Jolla, CA). Then cells were passed through needle of the syringe to break up the cell aggregates. The lysate was cleared by centrifugation at 14000 g for 30 min at 4°C and the supernatant was used or immediately stored at −80°C. For western blotting 12% poly acrylamide gels were used to resolve 30μg of protein, transferred on to a nitrocellulose membrane, Equal loading were confirmed with ponceau staining of the membrane. Then probed with appropriate monoclonal primary antibodies and detected by chemiluminescence scanner by LI-COR after incubation with specific secondary antibodies (18). The primary antibodies as follows as follows Phospho-AMPKα (Thr172) (D4D6D), AMPKα (D5A2), LDHA (C4B5) 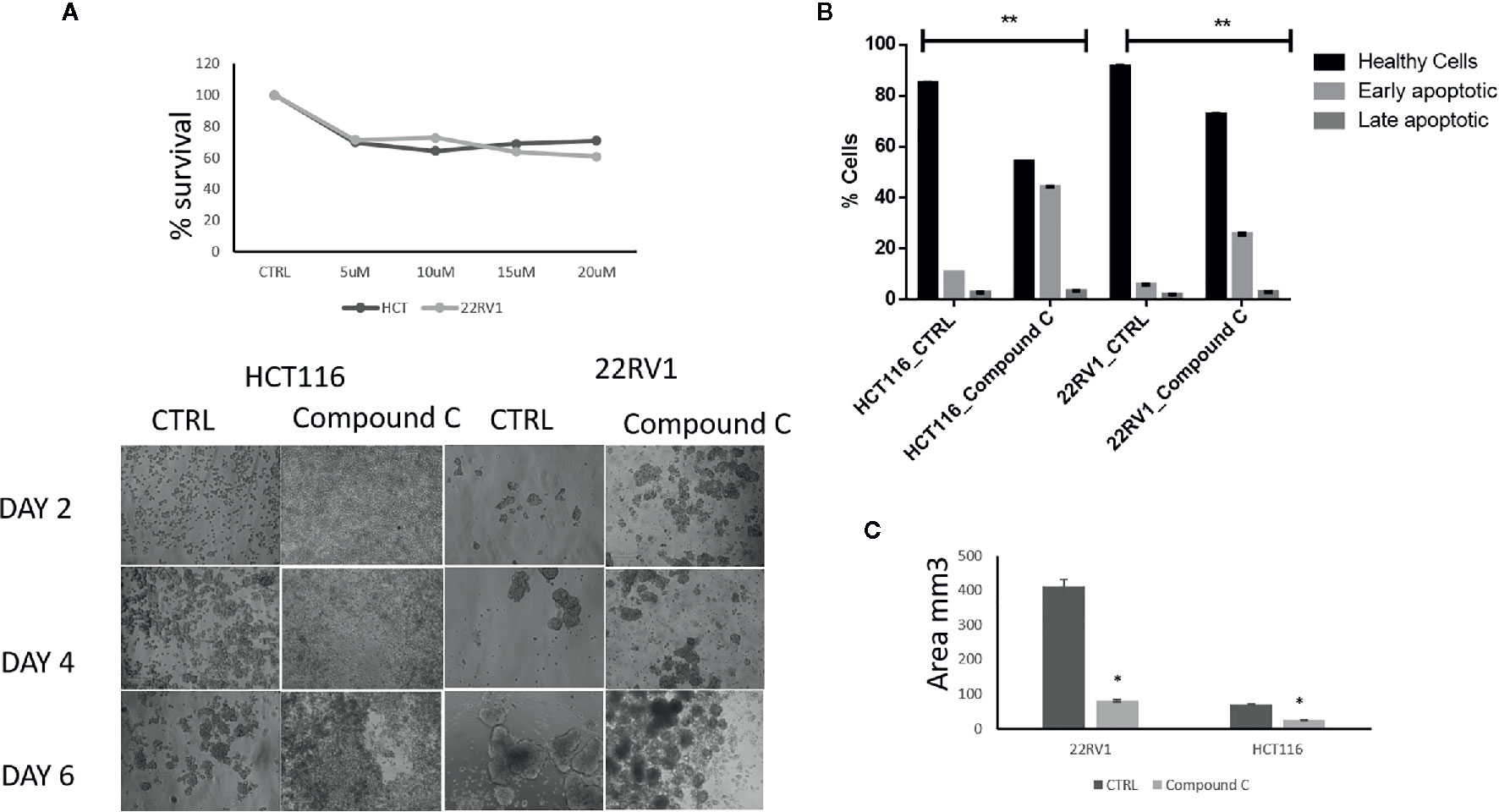 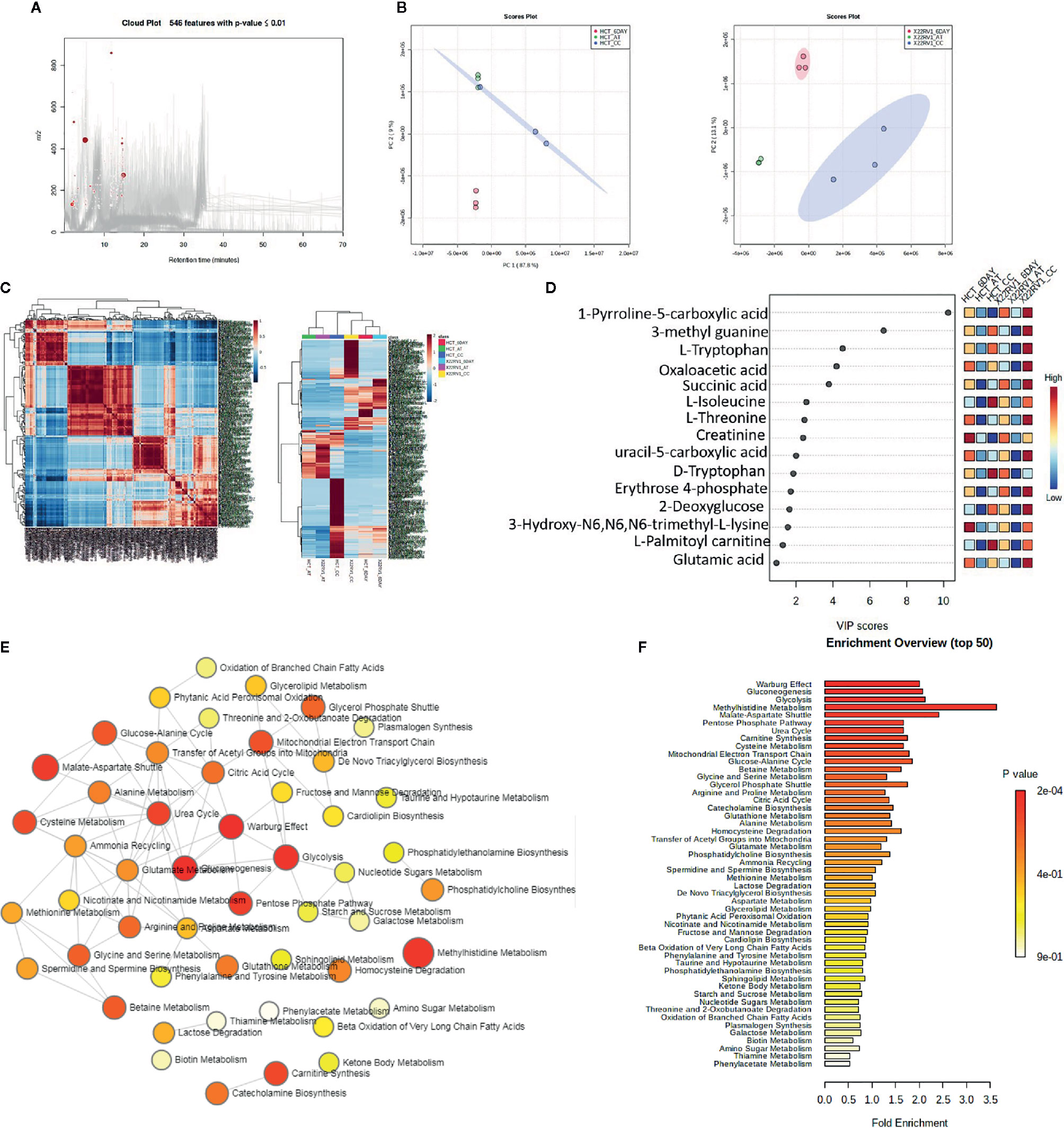 Table 1 Top metabolite with their expression.

The reduction of LDHA transcript was well corroborated with lower lactate dehydrogenase activity in Compound C treated cells (Figure 3C). These findings suggest that the end product of glycolysis i.e. pyruvate was preferred to enter oxidative phosphorylation rather than lactate formation in ECM detached cancer cells during Compound c treatment. We also observed reduction in phosphorylated-AMPK levels well-known to be targeted by Compound C in treated cells (Figure 3C). 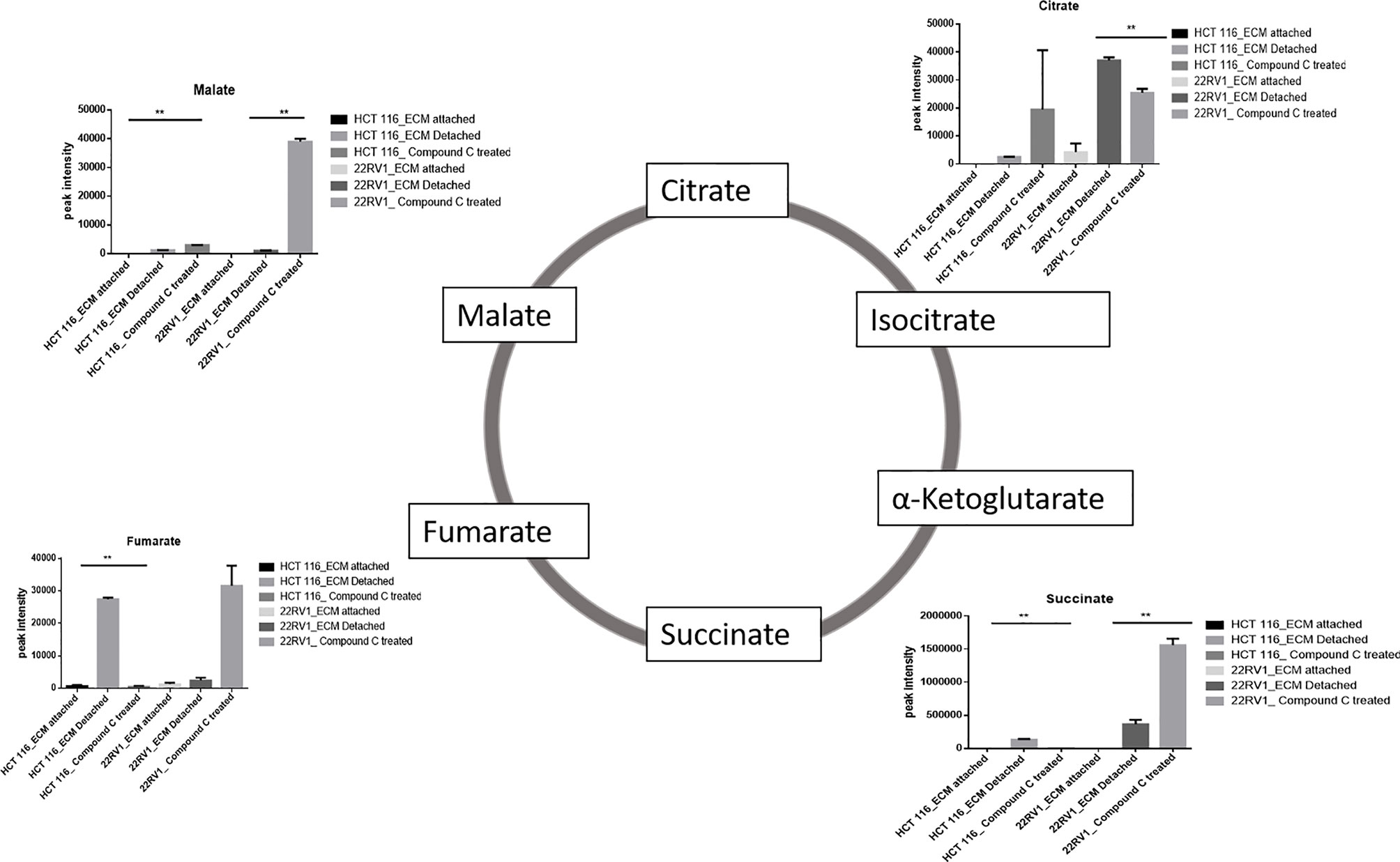 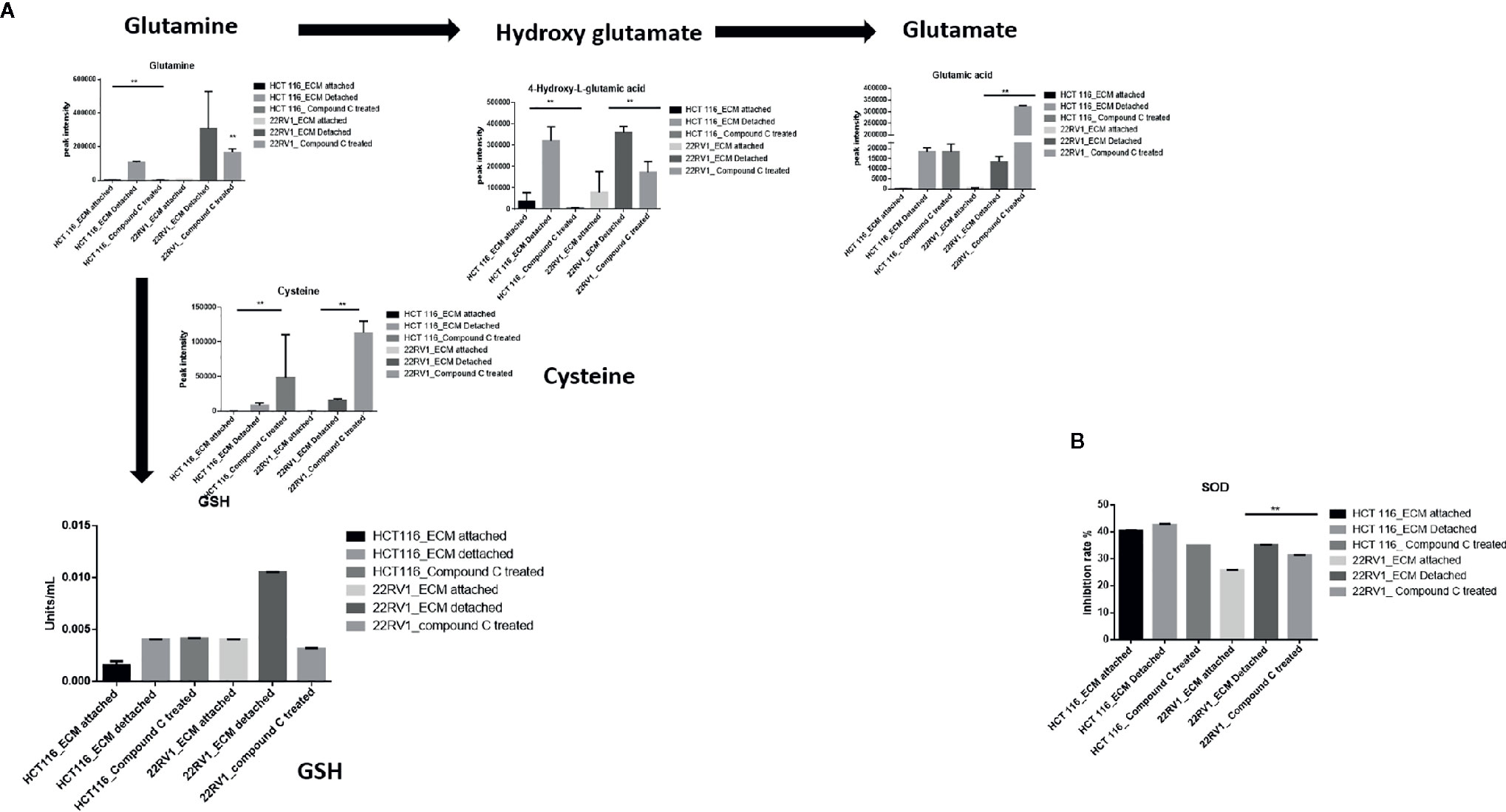 Hexose monophosphate shunt (HMP), also known as Pentose phosphate pathway (PPP) or phosphogluconate pathway, starts from the branch of glycolysis and the first step of glucose metabolism. HMP activation is demonstrated in different types of cancer and in their role in association with metastasis, invasion, and angiogenesis (22, 23). Our studies showed the ECM detached cells increased intermediate metabolite of HMP shunt in both cell lines. Compound C treatment increases ribose, erythrose and xylose levels. However, there were no significant changes observed in nucleotide levels of adenosine and guanosine (Figure 6) (Table 2).

Table 2 Fold change of metabolite involved in PPP- fold change was calculated with normalized value of ECM attached and up and down regulation was mention with proposition to ECM detached and Compound C treated.

Table 3 Fold change of metabolite involved in one carbon metabolism- fold change was calculated with normalized value of ECM attached and up and down regulation was mention with proposition to ECM detached and Compound C treated.

Table 4 Fold change of metabolite involved in DNA lesion - fold change was calculated with normalized value of ECM attached and up and down regulation was mention with proposition to ECM detached and Compound C treated.

Numerous studies have shown that the metabolic reprogramming induced by ECM detachment contributes to cell survival and promotes metastasis. AMPK is a nutrient sensor activated in ECM detachment when ATP : ADP ratio is low (27). In this study, we have shown that metabolic adaption during ECM detachment and during the energy crisis. A metabolic switch happened during Compound C treatment in ECM detached cells. ECM detachment is a signature for metastasis and tumorigenesis (28). Cell depend on glucose metabolism for energy production and biosynthesis need for cell survival and proliferation (29). We showed ECM detachment increase in glycolysis in detached cells. AMPKα1, keeps the high level of reduced glutathione to maintain reduction–oxidation reaction (redox) homeostasis, AMPKα1 regulate the glutathione reductase (GSR) phosphorylation possibly through residue Thr507 which enhances its activity of enzyme (30). Our studies have shown that glutamine levels in ECM detached cells increased and supports metabolic switch reductive carboxylation for energy requirements. Reductive carboxylation is known for mitochondrial disfunction and supports cell proliferation. Our results demonstrated an Compound C was able to reduce glutamine, and other intermediate metabolites. ECM detached activates reductive carboxylation and oxidation glutamine with glycolysis, enabling biomass generation and ATP production; and maintained redox homeostasis, AMPK inhibition reduces glutamine and reduces biomass production and energy deprivation.

ECM detached cancer cells that allow glycolytic intermediate to accumulate and switch to alternate pathway HMP or PPP, which can stimulate macromolecular synthesis and combat oxidative stress (31, 32), our studies showed the ECM detachment activates PPP, intermediate metabolite accumulation was increased on ECM detached cells. The PPP is composed of two functionally interrelated branches: the oxidative and the non-oxidative metabolism. In the oxidative arm of the HMP, three major irreversible reactions involved in the reduction of glucose-6-phosphate to ribose-5-phosphate with reduction of nicotinamide adenine dinucleotide phosphate (NADPH) and ribulose-5-phosphate (Ru5P), In the synthesis of nucleotide (33–35). The non-oxidative branch of the HMP generates nucleotide synthesis from glyceraldehyde-3-phosphate and fructose-6-phosphate. Our studies show the glyceraldehyde-3-phosphate increase in 22RV1 and decrease in HCT116, in both cell lines, AMPK inhibition shows an increase in ribose sugar and erythrose involve in the salvage pathway. In this scenario, we observed that the22RV1 might involve non-oxidative and HCT116 oxidative PPP pathways during AMPK inhibition.

Several pathways are intermediate and generate one-carbon metabolism is include serine and glycine metabolism. Cancer cells show alter DNA, RNA, and histone methylation patterns. Epigenetic modification in DNA, RNA, and histone regulates various gene regulation and function. Post-translational modification (PTM) in protein methylation alter protein-protein interaction (36). Our observation showed, ECM detachment responsible for the activation of epigenetic modulator metabolite involved in one-carbon metabolism. S-adenosylmethionine (SAM) is a methyl donor; SAM transfer the methyl group to DNA and RNA, it converted to S-adenosylhomocysteine, which is converted to homocysteine and recycled to methionine. Importantly, SAM and homocysteine levels increased in ECM detached cancer cells. This observation is showing that methylation might be high in ECM detached cancer cells. The recent studies revealed that cysteine regulates the mTOR1 activity, cysteine uptake inhibits the mTOR activation and halts protein synthesis, and mTOR is regulated by AMPK. Our studies have shown the cysteine level in ECM detached and AMPK inhibited ECM detached cancer cells are increased, it is showing Compound C induces the cysteine level in ECM detached cells.

This project was funded by the Deanship of Scientific Research (DSR) at King Abdulaziz University (KAU), Jeddah, under grant no. (KEP-15-130-41). The authors, therefore, acknowledge with thanks DSR technical and financial support.

The authors thank the Core Metabolomics Facility at the Department of Biochemistry, KAU for providing help for metabolomics study.

The Supplementary Material for this article can be found online at: https://www.frontiersin.org/articles/10.3389/fonc.2021.612778/full#supplementary-material

Copyright © 2021 Shait Mohammed, Alghamdi, Alzahrani, Zamzami, Choudhry and Khan. This is an open-access article distributed under the terms of the Creative Commons Attribution License (CC BY). The use, distribution or reproduction in other forums is permitted, provided the original author(s) and the copyright owner(s) are credited and that the original publication in this journal is cited, in accordance with accepted academic practice. No use, distribution or reproduction is permitted which does not comply with these terms.