Glioma is a malignant tumor that derived from the central nervous system. Four grades were proposed for evaluating its malignancy according to its pathological features, including grades I, II, II, and IV. Grade IV glioma, also called as glioblastoma or glioblastoma multiforme (GBM), is the worst subtype of glioma with median survival time less than 14.6 months (1). High proliferative ability, disordered tumor angiogenesis, and massive tumor necrotic area were recognized as its feature in GBM (2). Recent study proposed different classification of GBM based on its transcriptomic signatures (3, 4). Treatment like the STUPP protocol is able to prolong patient’s survival time but cannot inhibit glioma progression. Therefore, identification of potential target to glioma may assist in improving its prognosis.

HOXA5 belongs to the gene family encoding transcription factors, which contained homeobox. This gene family expressed subsequently and affected tissue developmental and organogenesis (5). HOXA5 is located on chromosome 7 in human and encodes ANTP-class homeodomain protein consisting of 270 amino acids (5). HOXA5 widely participated in the development of organs such as the respiratory system, digestive system, lipid tissue, mammary gland, and so on (5, 6). Therefore, HOXA5 acts a critical role in human development.

In this work, the expression profile of the HOXA5 in multiple tumor types was mapped. Its association with glioma progression and potential mechanisms were analyzed by using the GO/KEGG enrichment analysis. We identified that HOXA5 as an unfavorable factor for glioma and its expression are highly connected with the activation of p53-related pathways. We also confirmed that HOXA5 affected tumor cells progression through regulating tumor cell proliferation.

Patients were subdivided into high and low groups according to HOXA5 expression. The overall survival (OS), progression-free interval (PFI), and disease-specific survival (DSS) rates of patients in low and high groups were compared by the Kaplan–Meier method with log-rank test. ROC was performed to evaluate the prediction performance of HOXA5 expression in various aspects, including 3-year, 5-year OS, and subtype of GBM (classical, mesenchymal, neural, proneural).

U87-MG cells and U251 cells, purchased from the Chinese Academy of Sciences, were cultured in DMEM medium with 10% Gibico FBS+1% penicillin-streptomycin, and the medium was changed every 2 to 3 days.

The logarithmic growth phase transfected U251-MG and U87-MG GBM cells were obtained and digested for CCK8 assay. 1 × 103 glioma cells and 100 μl of medium were placed into 96-well plates. The absorbance at 450 nm was measured after hatched for 1 h under the condition of 37°C and 5 % CO2.

U87-MG cells and U251 cells were digested and plated in six-well plates (300 cells per well) and cultured with 5% CO2 at 37°C for 2 weeks. The colonies were then fixed with 4% methanol (1 ml per well) for 15 min and stained with crystal violet for 30 min at room temperature. After photograph, discoloration was performed with 10% acetic acid, and cells were measured absorbance at 550 nm.

Transfected cells were digested, and cell suspension was obtained after centrifuging. Then, cells were washed two to three times with PBS, and we adjusted the number of cells to 1 × 106 cells/ml, 400 µl PBS was added, the cells were gently resuspended to separate as individual cells, 1.2 ml of pre-cooled 100% ethanol was added, and the cells were placed overnight at 4°C for fixation. PI was excited by a 488-nm argon ion laser and was received by a 630-nm pass filter. The percentage of each cell cycle was analyzed using the PI fluorescence histogram.

Transfected cells were digested, and cell suspension was obtained after centrifuging. Then, cells were washed two to three times with PBS, 500-µl binding buffer was added, then the cells were gently resuspended to separate into individual cells, followed by staining with 5-µl Annexin V-APC and 5-µl PI solution for 10 min at room temperature and in dark place. The apoptotic cells were measured by the flow cytometer.

Kaplan-Meier survival curves were generated and compared using the log-rank test. Wilcoxon rank test (nonnormally distributed variables), t test (normally distributed variables), and one-way analysis of variance were used to analyze the expression difference of HOXA5 in different clinical factors, including WHO grades, GBM subtypes, and treatment outcome. The Pearson correlation was applied to evaluate the linear relationship between gene expression levels. Statistical analyses of the colony-forming assay and the CCK8 assay were carried out by GraphPad Prism (version 8.0). The Kolmogorov–Smirnov test was used to assess the normal distribution of data. All tests were two-sided, and P values <0.05 were considered to be statistically significant. 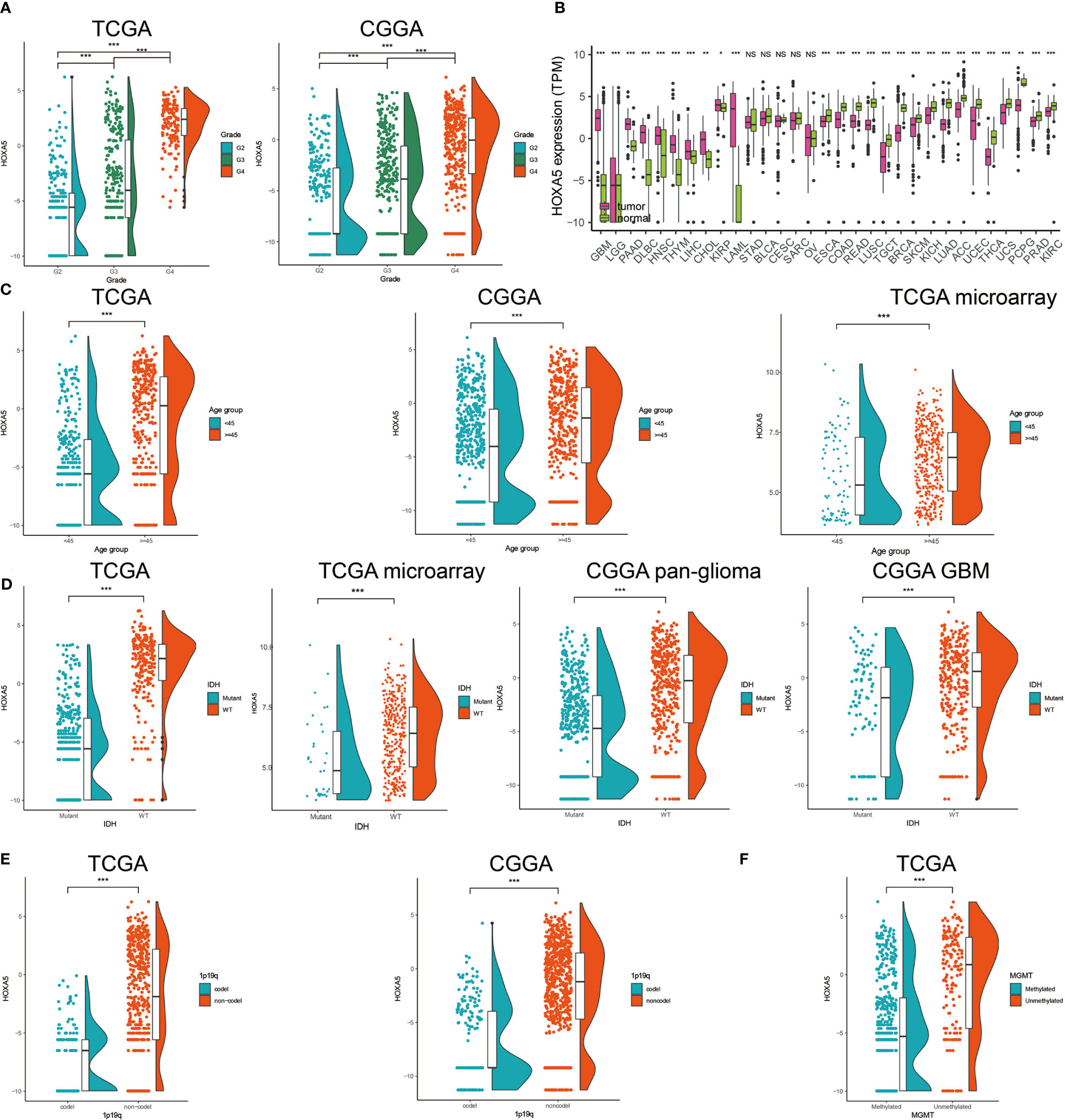 Inter-Tumor and Intra-Tumor Heterogeneous Characteristics of HOXA5 in Gliomas

Human gliomas have been molecularly categorized into distinct sub-classes: classical (CL), mesenchymal (MES), proneural (PN), and neural (NE). CL and MES subtypes showed more aggressive growth pattern than PN or NE subtypes (21). We subsequently investigated the inter-tumor heterogeneity of HOXA5 among different molecular subtypes based on the VERHAAK 2010 classification scheme (22). HOXA5 was upregulated in CL and ME subtypes by comparing with NE and PN subtypes in pan-glioma analysis in TCGA data set, where CL subtype had the highest expression of HOXA5 (P <0.001; Figure 2A). Receiver operating characteristic (ROC) curve further indicated that HOXA5 might serve as a predictor for CL and MES subtypes in pan-gliomas analysis (AUC value = 0.898, P <0.001; Figure 2B). Based on the Ivy Glioblastoma Atlas Project data, HOXA5 was found to be abundant in peri-necrotic zones, pseudopalisading cells around necrosis and cellular tumor compared with other pathological areas (P <0.001; Figure 2C). Furthermore, the different expression level of HOXA5 in glioma in regard to histology was shown in Figure 2D. HOXA5 was also highly expressed in primary glioma (P <0.001, respectively; Figure 2E), whereas the analysis for first-course treatment outcome showed that progressive disease was correlated with higher expression of HOXA5 (P <0.001, respectively; Figure 2F). 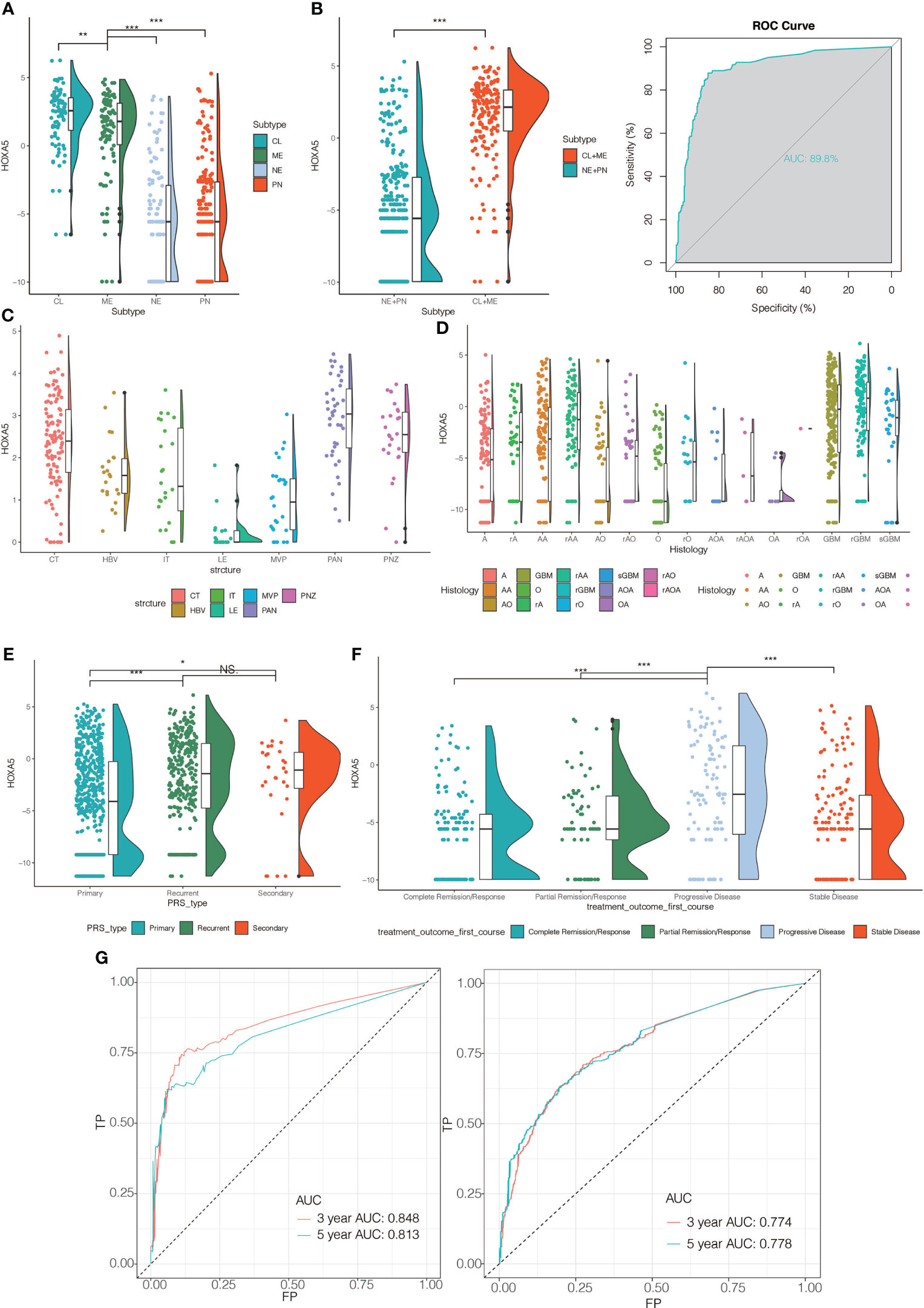 HOXA5 Expression Is Associated With Poor Survival in Glioma Patients 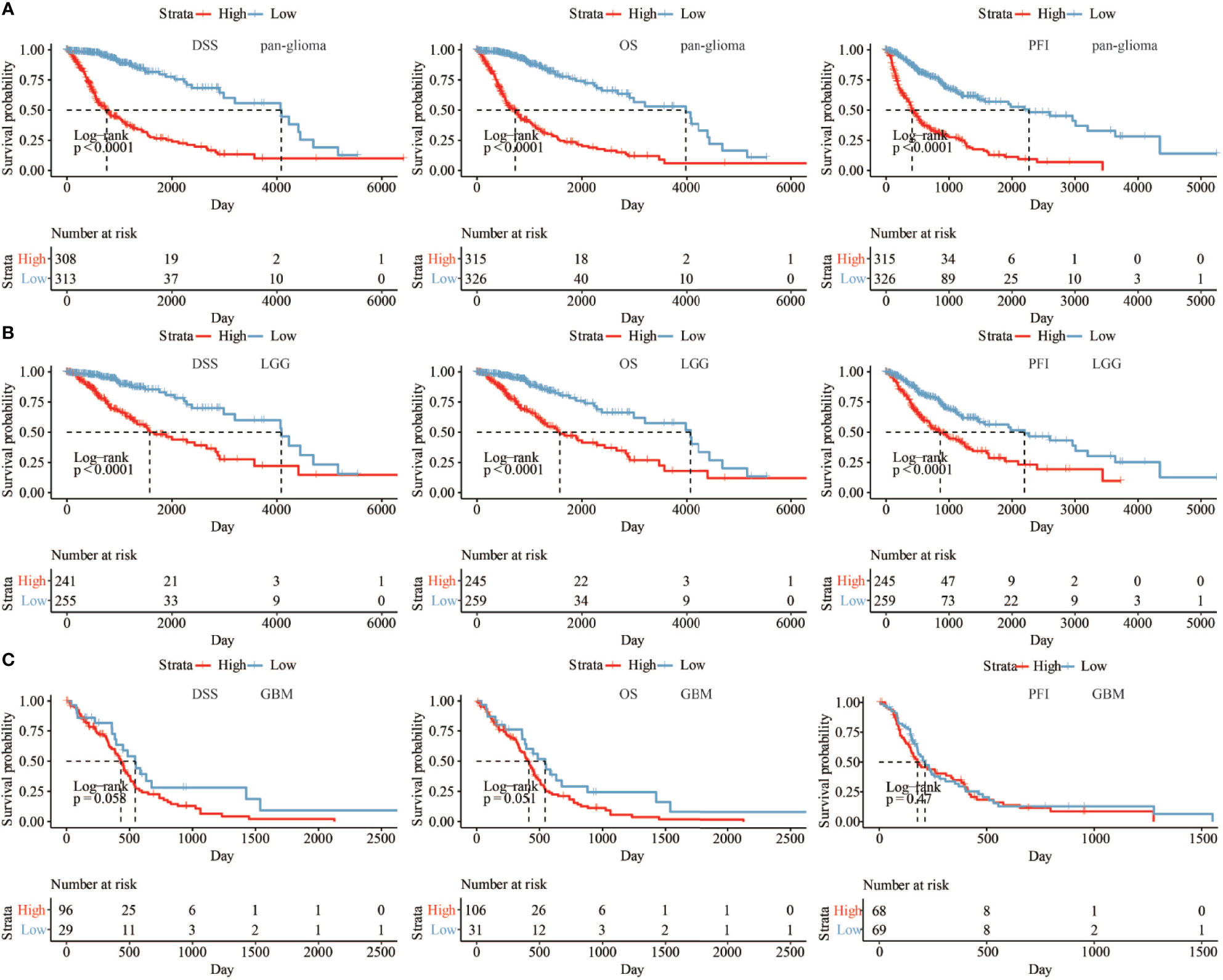 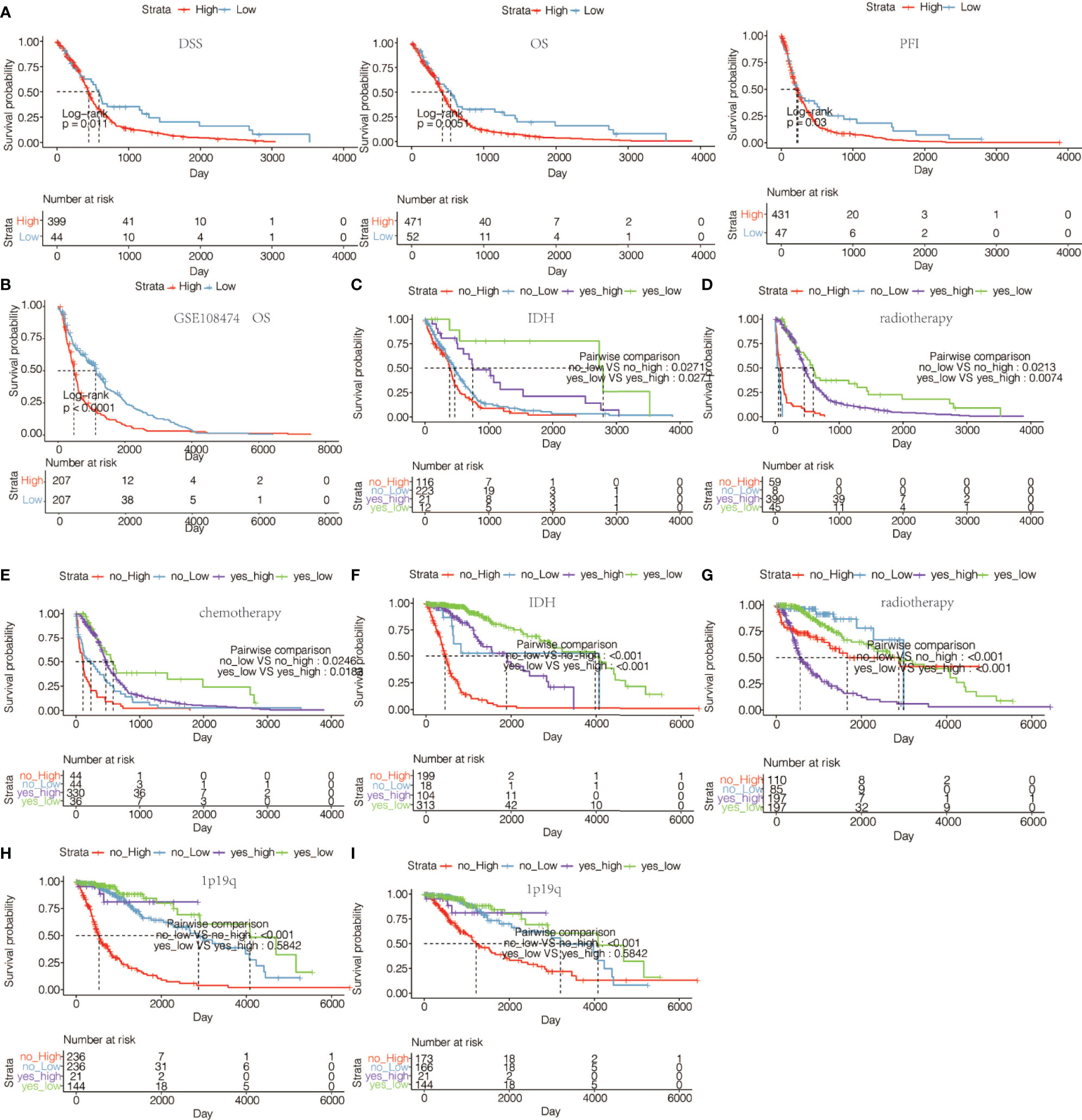 As for the 15 methylation probes designed for HOXA5 from Infinium Human Methylation450 BeadChip, the mean value of methylation probes exhibited negative association with expression of HOXA5 (Pearson test, R = −0.61, P < 2.2 × 10–16). As the IDH mutation exerted great influence on the methylation of the whole genome, we separately analyzed the relationship between HOXA5 and methylation status for IDH‐wild and IDH‐mutant gliomas. As shown in Figure 5A, in IDH‐wild gliomas, methylation was much lower than that of IDH‐mutant tumors, as expected (Student’s t test, P = 1.8 × 10−6). 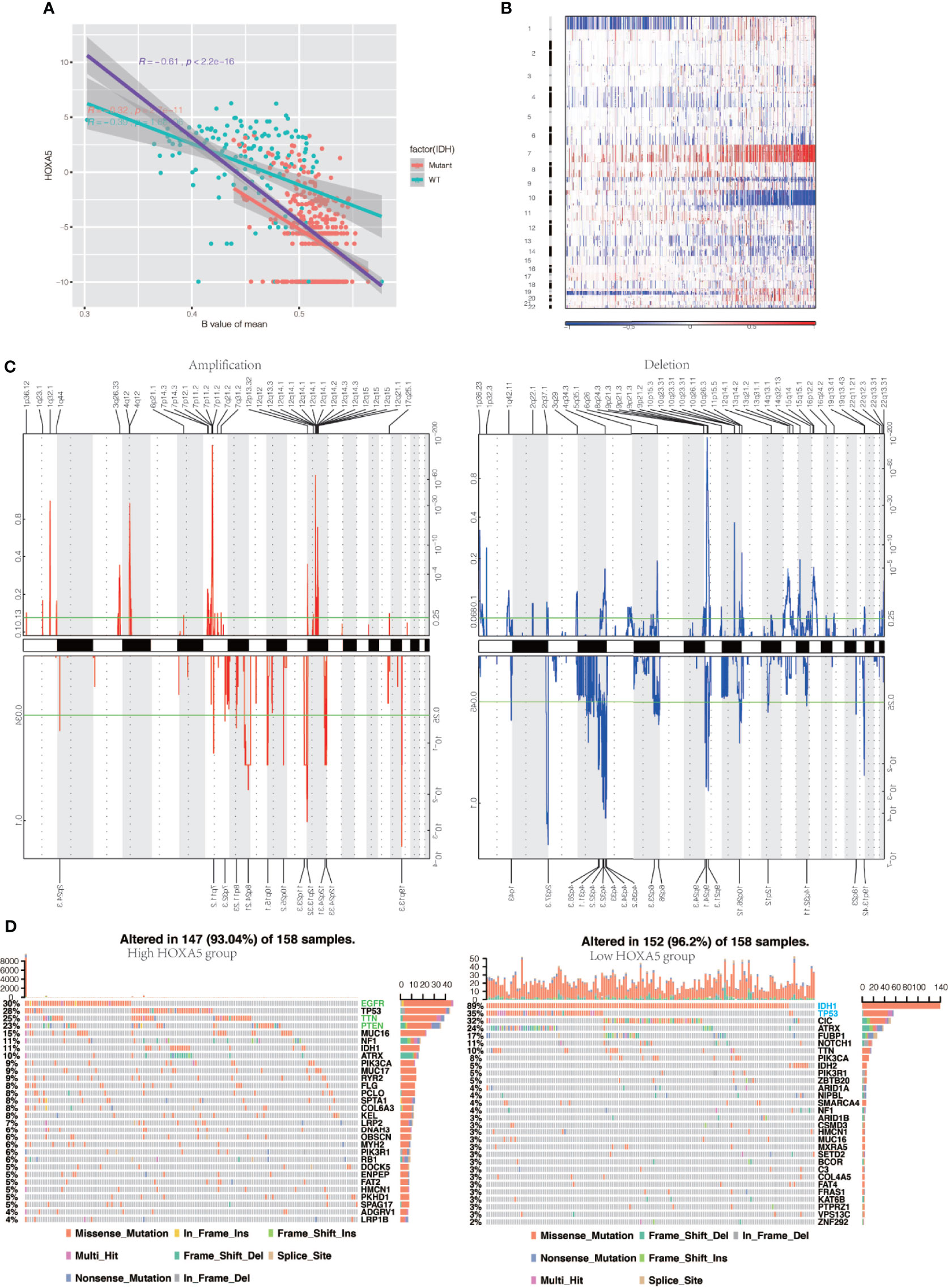 To determine whether HOXA5 expression levels were associated with specific genomic characteristics in gliomas, we performed copy number variation (CNV) and somatic mutation analysis using the TCGA data set. A distinct overall CNV profile emerged from the comparison of the HOXA5low (n = 158) versus the HOXA5high (n = 158) cluster (Figures 5B, C). Amplification of chr7 and deletion of chr10, which are both common genomic events in GBM, frequently occurred in the HOXA5high cluster (Figure 5B). Non-deletion of 1p and 19q, a genomic hallmark of oligodendroglioma, also more frequently appeared to be associated with the HOXA5high cluster (Figure 5C). In HOXA5high samples, frequently amplified genomic regions included oncogenic driver genes, such as EGFR (7p11.2), IK3C2B (1q32.1), PDGFRA (4q12), and CDK4 (12q14.1), whereas deleted regions contained tumor suppressor genes, including CDKN2A/CDKN2B (9p21.3), PARK7 (1p36.23), and PTEN (10q23.3). In HOXA5low samples, significant amplifications showed peaks in 8q24.21, 12p32.32, and 19p13.3, whereas the frequently deleted genomic regions were 2q37.3, 4q32.3, 9p21.3, and 19q13.43.

Potential Mechanism of HOXA5 in Regulating the Progression of Gliomas 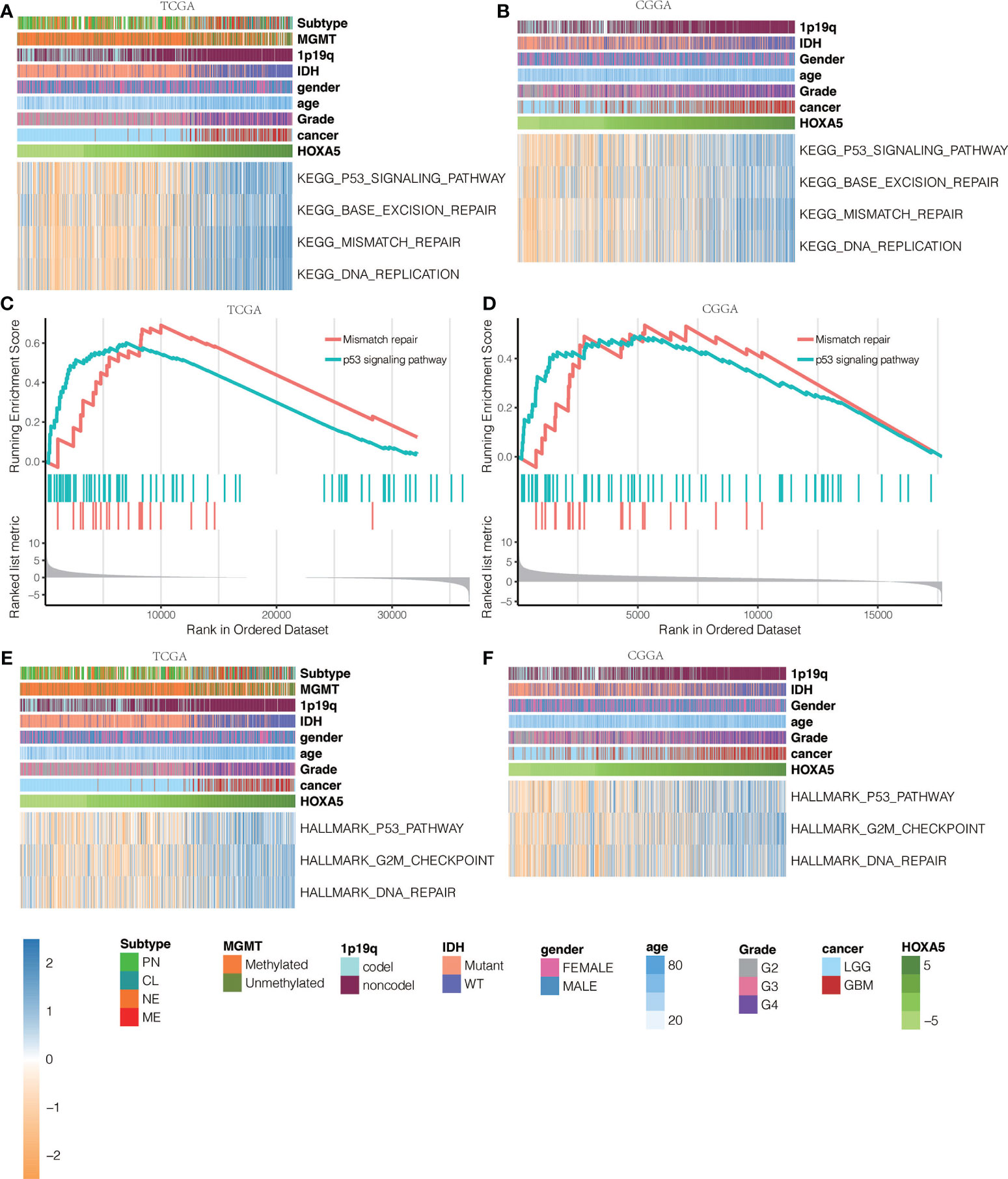 To further investigate the role that HOXA5 plays in the proliferation of GBM, colony-forming assay, CCK8 assay, and cell cycle analyses were performed. Western blot results verified the silence of HOXA5 by siRNA (Figures 8A, B). The cell colony forming assay (Figures 8C, D) revealed the remarkable suppression of cell clonality of GBM after silencing HOXA5 in U87 cell line and in U251 cell line (Figure 8E). The CCK8 assay revealed that the cells proliferation ability is inhibited by silencing HOXA5 (Figure 8F). Cell cycle analysis suggested that cells were blocked at the G2/M phase after silencing HOXA5 (Figures 8G, H). 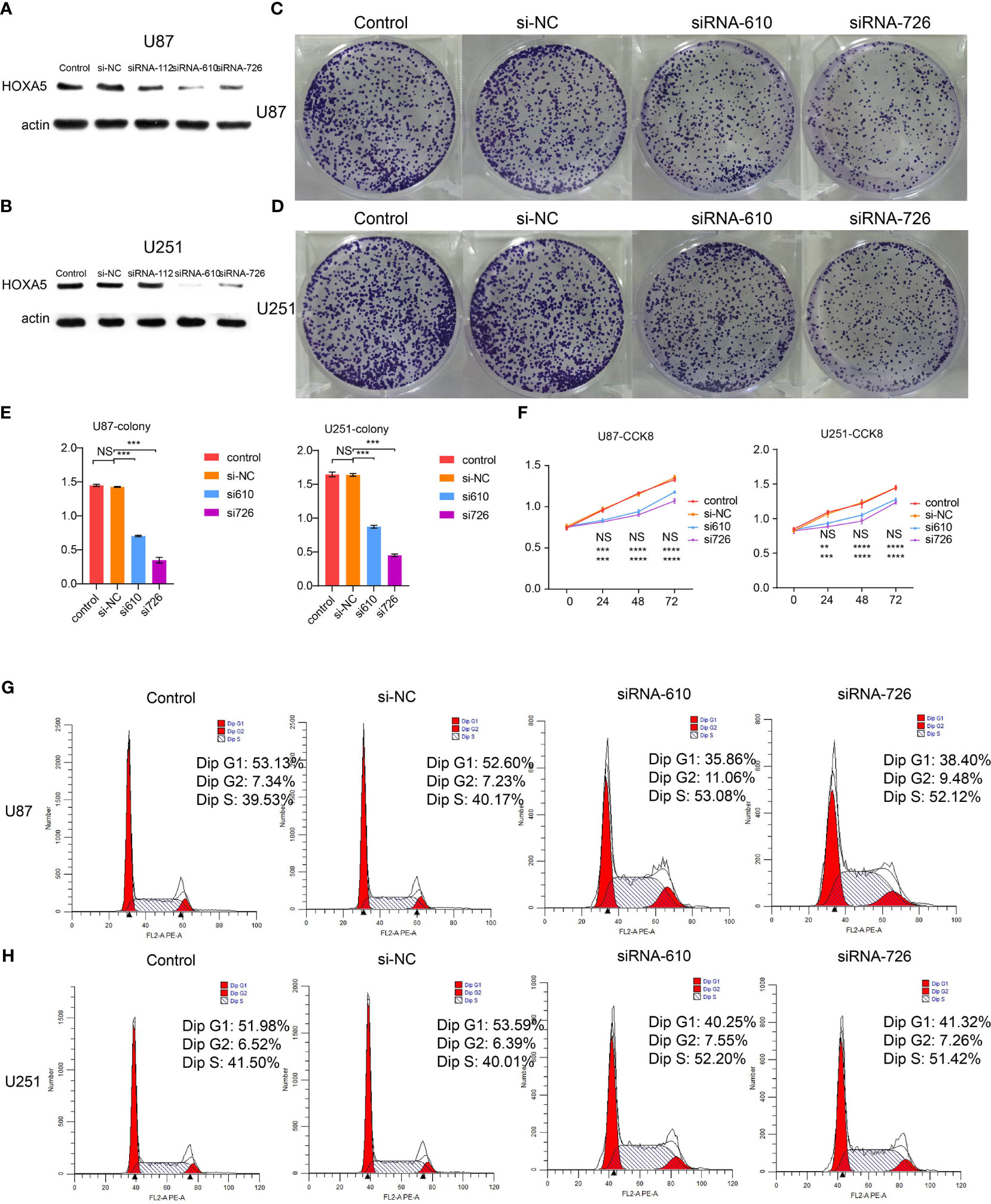 The potential role of HOXA5 in the apoptosis of GBM was also explored. The analysis of flow cytometry described that down-regulation of HOXA5 remarkably enhanced apoptosis in U87 cell line and U251 cell line (Figures 9A, B). Figure 9 (A) Cell apoptosis analysis was performed by flow cytometry. Shown are representative flow cytometric profiles of cells in control group, si-NC group, siRNA-112 group, and siRNA-610 group in U87 and U251 cell lines. (B) Statistical analysis for cell apoptosis assay in U87 and U251 cell lines. NS, not statistically significant; ***P < 0.001.

The product of HOXA5 is a DNA-binding transcription factor and able to regulate multiple gene expression, including TP53. Previous study reported that HOXA5 can bind to the promoter of TP53 to activate its transcription and affect corresponded pathways (16, 37). HOXA5 affected tumor progression through influencing TP53 homeostasis in breast cancer (10, 38), TP53-dependent apoptosis in liposarcomas (39), and TP53-mediated cell proliferation in cervical cancer (16). Therefore, HOXA5 can affect TP53-mediated pathway by regulating TP53 expression.

Next, we investigated biofunction difference between HOXA5high and HOXA5low samples. Results suggested that DNA repair-related pathways were activated in HOXA5high samples. Because DNA damage repair is also associated tumor resistance to treatment, such as chemo- or radio-therapy, HOXA5 might also contribute to tumor resistance to treatments (40, 41). In this work, survival analysis based on radio- and chemo-therapy suggested that high HOXA5 samples showed worse clinical outcome than low HOXA5 samples in this study. Besides, previous study confirmed that HOXA5 can affect glioblastoma cells sensitivity to radiation therapy (9). Collectively, HOXA5 may target TP53-mediated DNA damage repair to modulate tumor resistance to treatments (42–44). Taken together, HOXA5 may affect glioma response to chemo- or radio-therapy by targeting TP53.

Other family members in the HOX family are also involved in tumor progression, including leukemia, breast cancer, lung cancer and so on (45, 46). For instance, abnormal expressions of HOXA6, HOXA7, HOXA9, HOXA13, HOXB13, HOXD4, HOXD9, HOXD10, and HOXD13 were noticed in tumor tissue by comparing with normal tissue (47). Those family members can affect glioma cells viability (48, 49), the stemness of glioma stem cells (50), autophagy (51), invasion ability (52), and tumor sensitivity to therapeutic drugs (53). Collectively, this family showed a close association with glioma progression, which deserves further exploration.

The original contributions presented in the study are included in the article/Supplementary Material. Further inquiries can be directed to the corresponding authors.

FD and PC analyzed the data and performed in vitro environments. PB assisted in manuscript writing and revising. WP and QC. designed and supervised the study, and offered funding. All authors contributed to the article and approved the submitted version.

The Supplementary Material for this article can be found online at: https://www.frontiersin.org/articles/10.3389/fonc.2021.633430/full#supplementary-material

Copyright © 2021 Ding, Chen, Bie, Piao and Cheng. This is an open-access article distributed under the terms of the Creative Commons Attribution License (CC BY). The use, distribution or reproduction in other forums is permitted, provided the original author(s) and the copyright owner(s) are credited and that the original publication in this journal is cited, in accordance with accepted academic practice. No use, distribution or reproduction is permitted which does not comply with these terms.