The Role of Long Noncoding RNA AL161431.1 in the Development and Progression of Pancreatic Cancer

Long noncoding RNAs (lncRNAs) are mRNA transcripts longer than 200 nucleotides that are not destined to be translated into proteins (4). Although thought to be non-functional for decades, more and more evidence has shown that lncRNAs are critical regulators of pathogenesis, progression, and metastasis of a broad scope of cancers (5). Many lncRNAs are promising diagnostic and prognostic biomarkers for cancers, including pancreatic cancer (6), whereas lncRNA AL161431.1 has been reported to be involved in the pathogenesis of endometrial carcinoma (7), hypoxic TCGA-BRCA tumors (8), and lung squamous cell carcinoma (9).

The transcriptome sequencing data of 181 samples were generated by the R package in The Cancer Genome Atlas- Pancreatic adenocarcinoma (TCGA-PAAD) dataset obtained from the TCGAbiolinks (https://bioconductor.org/packages/release/data/experiment/vignettes/TCGAbiolinksGUI.data/inst/doc/vignettes.html). Differential mRNA abundance analyses were carried out using DESeq2 (http://www.r-project.org/). Genes with reads < 5 in any sample were filtered out from the final quantitative analysis. Heatmap and volcano plot were constructed by normalized gene expression via R package. The normalized gene expressions were subjected to Gene Set Variation Analysis (GSVA, a non-parametric, unsupervised method for estimating variation of gene set enrichment through the samples of an expression dataset). R package survival was used for overall survival analysis. Cox proportional hazard (PH) model was executed by the functions of survival and survminer in R package. The best-scanned cutoff points are defined as the one with the most significant (log-rank test) split. R package survival ROC was used for Receiver Operating Characteristic (ROC) curve and Area Under Curve (AUC) plotted for different durations of survival analysis.

Ethical approval was obtained from the Ethical Committee of the First Affiliated Hospital of China Medical University (a tertiary hospital and regional cancer center in Shenyang, China). Written informed consent was obtained from all patients at admission. The diagnosis of pancreatic cancer was based on the National Comprehensive Cancer Network Guidelines (NCCN 2018), and no patient received preoperative chemotherapy. Pancreatic cancer tissues and adjacent normal tissue from the same patients were obtained during pancreaticoduodenectomy at the First Affiliated Hospital of China Medical University from June 1, 2018 to May 31, 2019, who had no bacterial or viral infections, chronic diseases such as hypertension, cardiovascular diseases, diabetes, or other cancers. Tissue samples were cryopreserved in liquid nitrogen immediately after surgical resection until further experiments.

Cell proliferation was detected using a CCK-8 assay kit (DOJINDO, Japan). Cells were seeded into 96-well plates (1 x 104/well). At 10 am, 10 μl CCK-8 reagent in 100 μl medium was added to each well. The light absorbance at 450 nm of each well was measured after 2 hour incubation at 37°C with an Epoch microplate spectrophotometer (BioTek China, Beijing). Cell viability was monitored in triplicate experiments and expressed as a percentage of that of the control cells.

Animal experiment protocols were approved by the Institutional Ethical Committee, and animals were properly treated in accordance with the institutional ethical requirements of experimental animals. Male nude mice were kept in a temperature-controlled specific-pathogen-free animal laboratory, with a 12h light/dark cycle. All animals had free access to food and water. SW1990-LNC-KD cells (1.5 × 106 cells in 0.1 ml sterile PBS, with stable knockdown of lncRNA AL161431.1), or SW1990-LNC-NC cells (with scrambled shRNA) were subcutaneously injected into the left flank of mice at 8 weeks of age. The volume of tumor was measured every morning by length x width x depth in mm. The mice were euthanized 2 weeks after cancer cell injection, and the growth of subcutaneous tumors were compared (n=7 in each group).

Twenty-four hours after transfection, SW1990 (1x105) or BxPC-3 (1x105) cells were resuspended in 100 µl serum-free medium and seeded into the upper chamber with 12 µm pore polycarbonate membranes pre-coated with Matrigel Basement Membrane Matrix (BD Biosciences, Bedford, MA). The lower chamber was filled with 600 μl of 1640 medium supplemented with 20% FBS. After 24 hours of incubation at 37°C with 5% CO2, cells remaining in the upper membrane surface were removed with a cotton swab, whereas invaded cells were fixed and stained with 0.5% crystal violet (13).

Twenty-four hours after transfection, cells were seeded in 24-well plates at 1x105 cells/well. Cells were cultured in medium containing 5% FBS with 5% CO2 for 24 h. A 1-mm wide scratch was made in the confluent cultures with a pipette tip, followed by wash twice with PBS to remove debris. The area of the scratch was measured using images taken by a phase-contrast microscope (14). 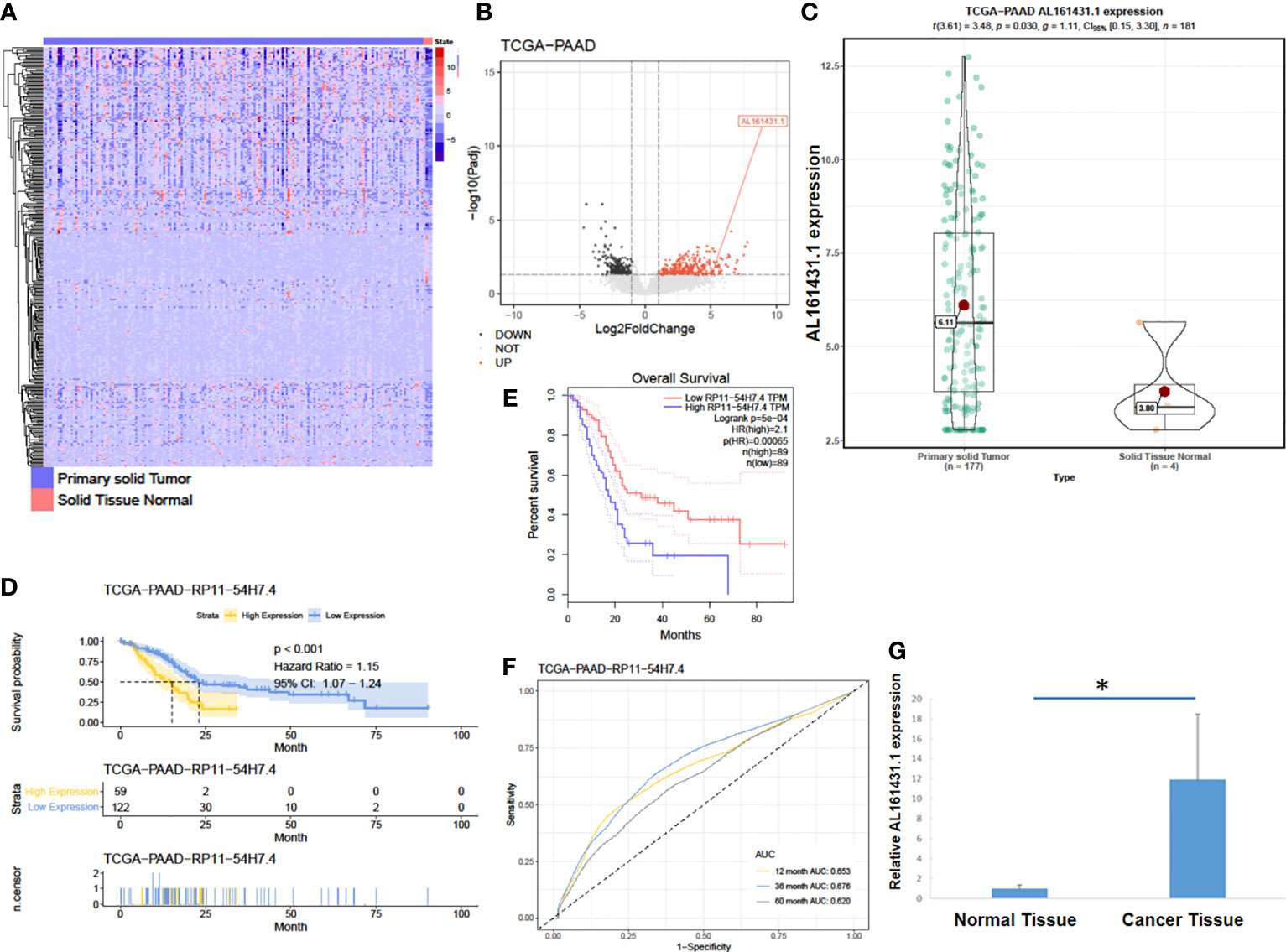 Knocking Down of lncRNA AL161431.1 Inhibited the Growth, Invasion and Migration of Pancreatic Adenocarcinoma Cells

The expression of lncRNA AL161431.1 in pancreatic cancer cell lines PANC-1, SW1990 and BxPC-3 cells was determined by qRT-PCR, and was found to be significantly higher in SW1990 and BxPC-3 cells compared to that in PANC-1 cells (Figure 2A). In order to study the function of AL161431.1, we tested specific siRNAs to knock down the expression of lncRNA AL161431.1, and found both siRNA1 and siRNA2 had significant knockdown effect (p<0.05 for both, Figure 2B). siRNA1 was selected for the following knockdown experiments. CCK-8 assay showed that the cell proliferative activity in the AL161431.1 siRNA knockdown group was significantly lower than that in the control group in both SW1990 and BxPC-3 cell lines (Figure 2C). Wound healing and Transwell experiments showed that after knocking down lncRNA AL161431.1, cell migration and invasion was significantly inhibited (Figures 2D, E). Compared with the scrambled control group, siRNA knock down of AL161431.1 significantly promoted cell death (Figure 2F), and the cells in the knockdown group accumulated in G1/S phase (Figure 2G). These results suggested that knocking down LncRNA AL161431.1 can inhibit the growth, invasion and migration, and promote apoptosis in pancreatic adenocarcinoma cells. 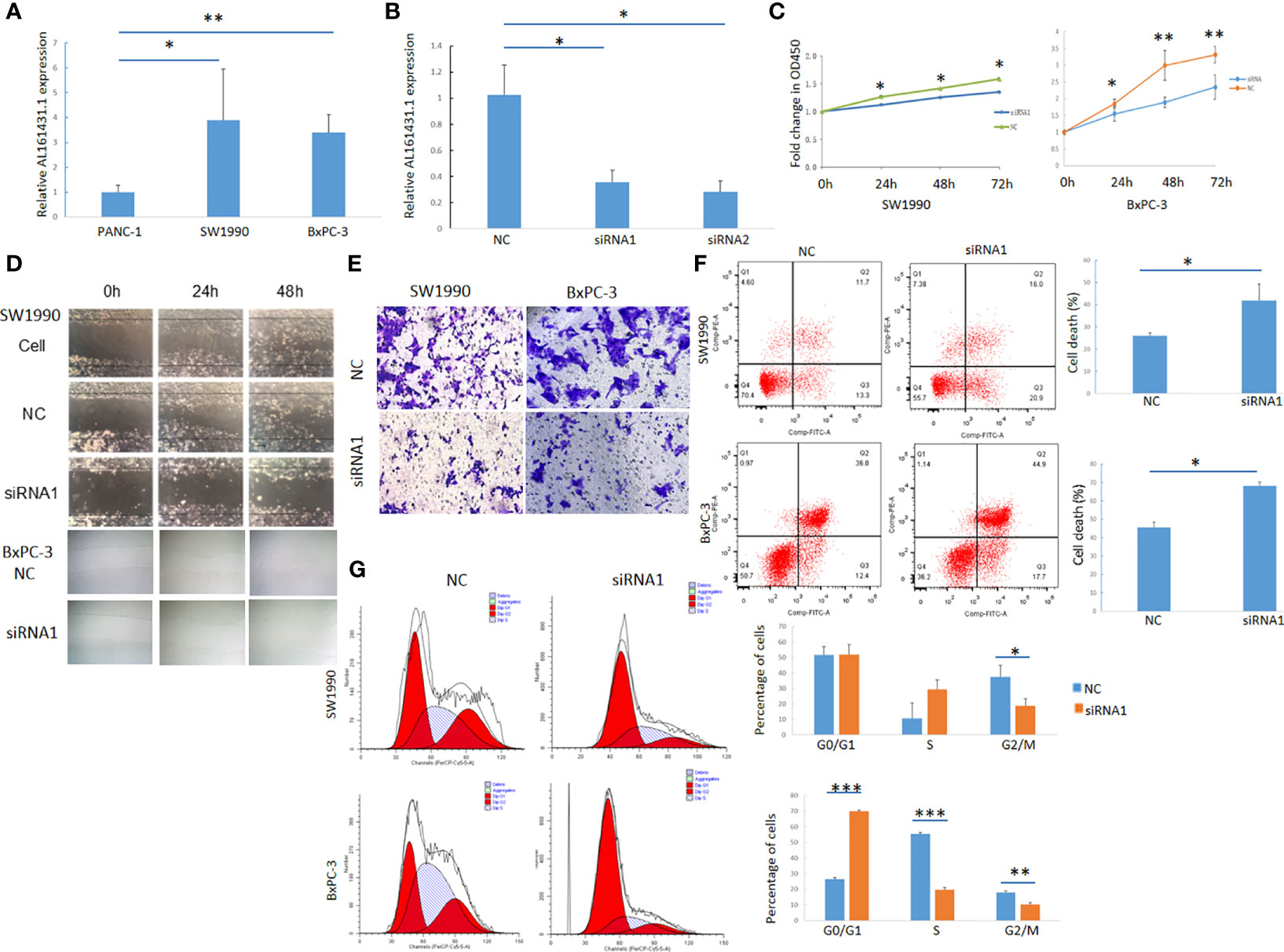 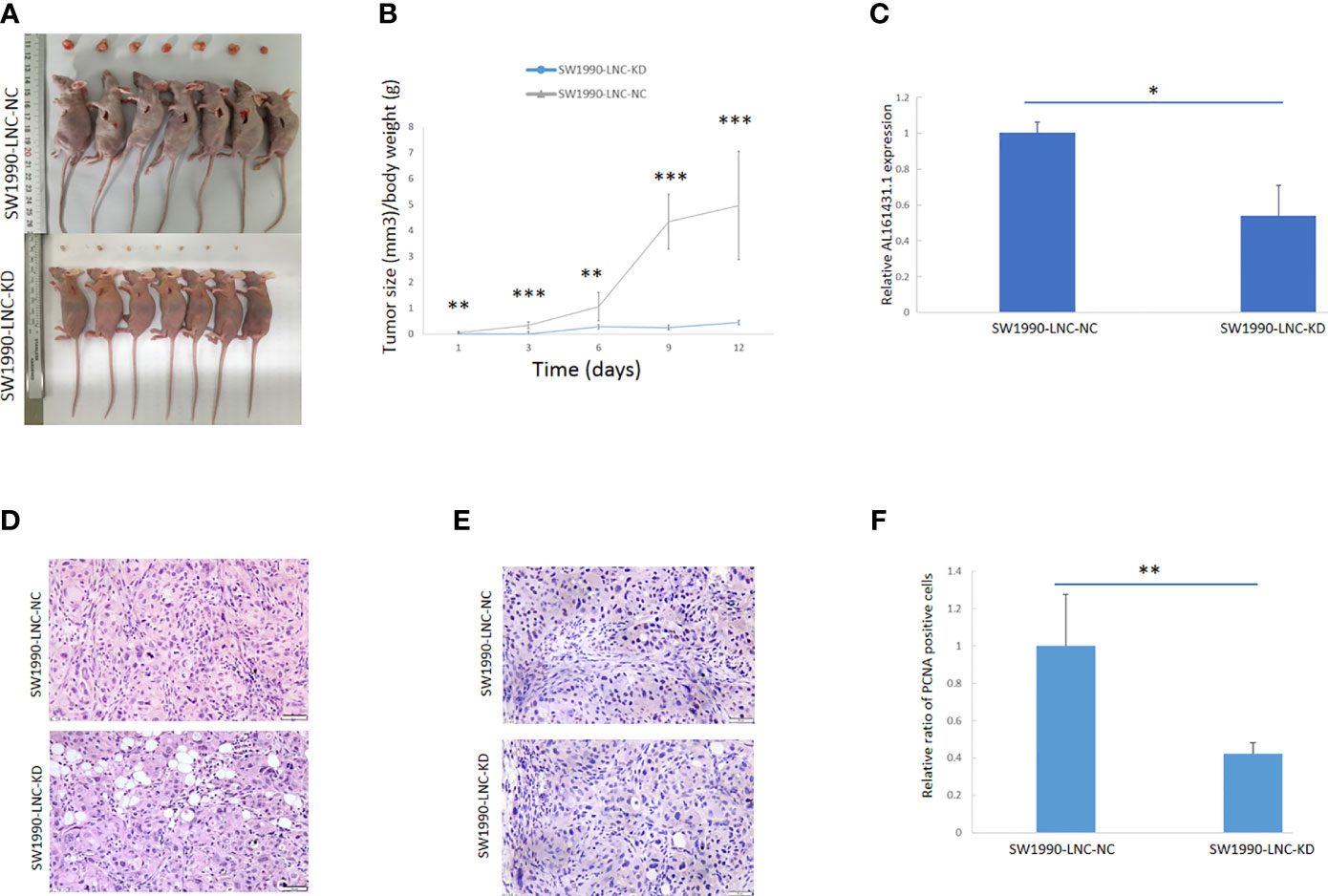 Predicting the Function of lncRNA AL161431.1 in Pancreatic Cancer Cells

The above in vivo and in vitro studies suggested that lncRNA AL161431.1 promoted cell growth. Using the median of lncRNA AL161431.1 as the cut-off value threshold, the expression of differential genes was analyzed by the DEseq2 (Figures 4A, B), and GSVA (Figure 4C). The enrichment of differentially expressed genes and the known gene set was analyzed by the GSEA software. It was found that genes that were upregulated in pancreatic cancer were highly enriched in the AL161431.1 high expression group. Through GO enrichment analysis (18), AL161431.1 was found to play roles in various cellular functions and processes such as cell-cell junction and extracellular microenvironment (Figures 4D, E). 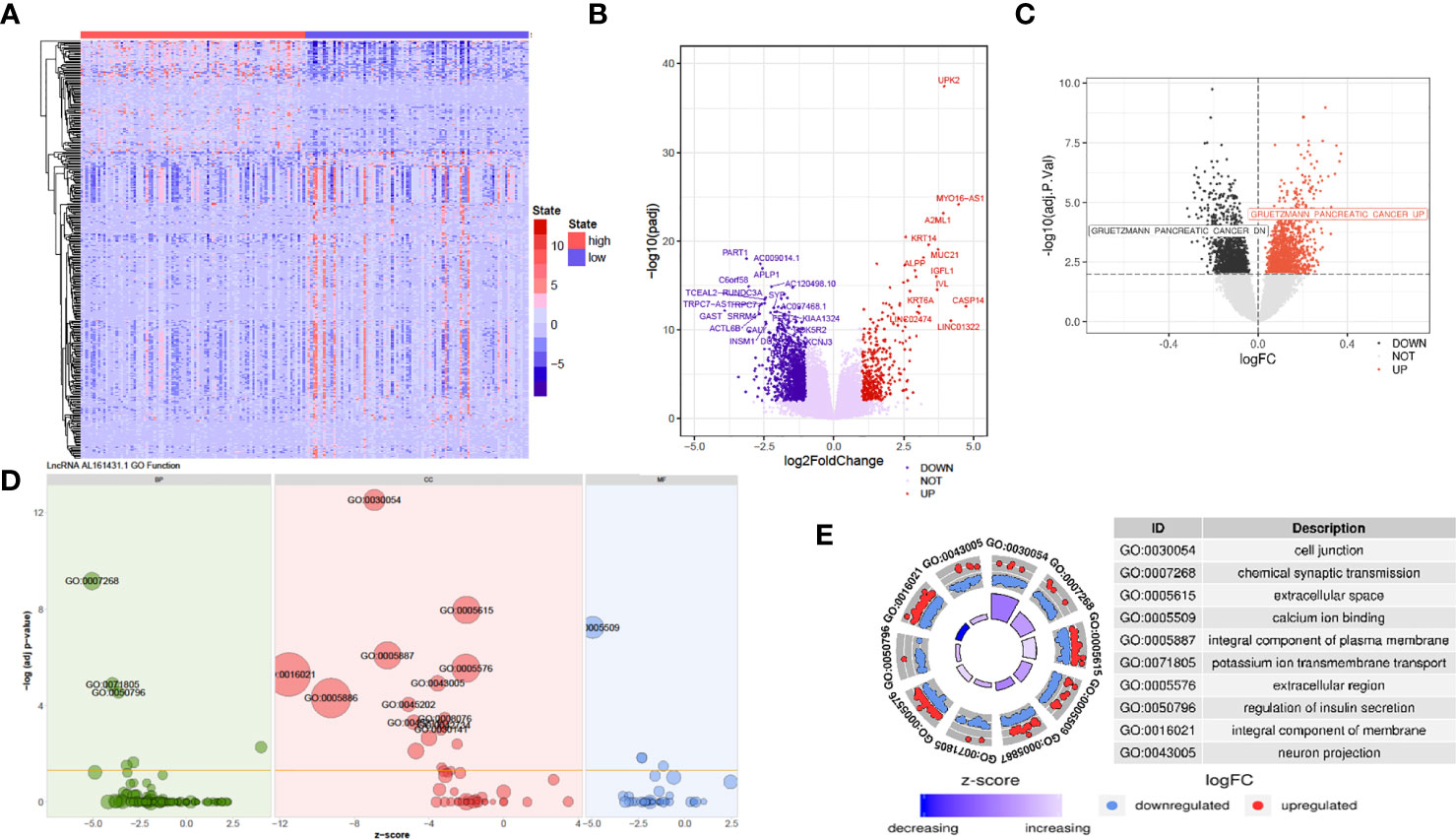 The Mechanism of lncRNA AL161431.1 in Regulating Cell Function

Figure 5 The mechanism of lncRNA AL161431.1 in regulating cell function. GO function relative genes (A) and fold changes (B); (C–F) GSEA analysis for different gene expression in patients with high- and low- AL161431.1 expression in TCGA-PAAD. 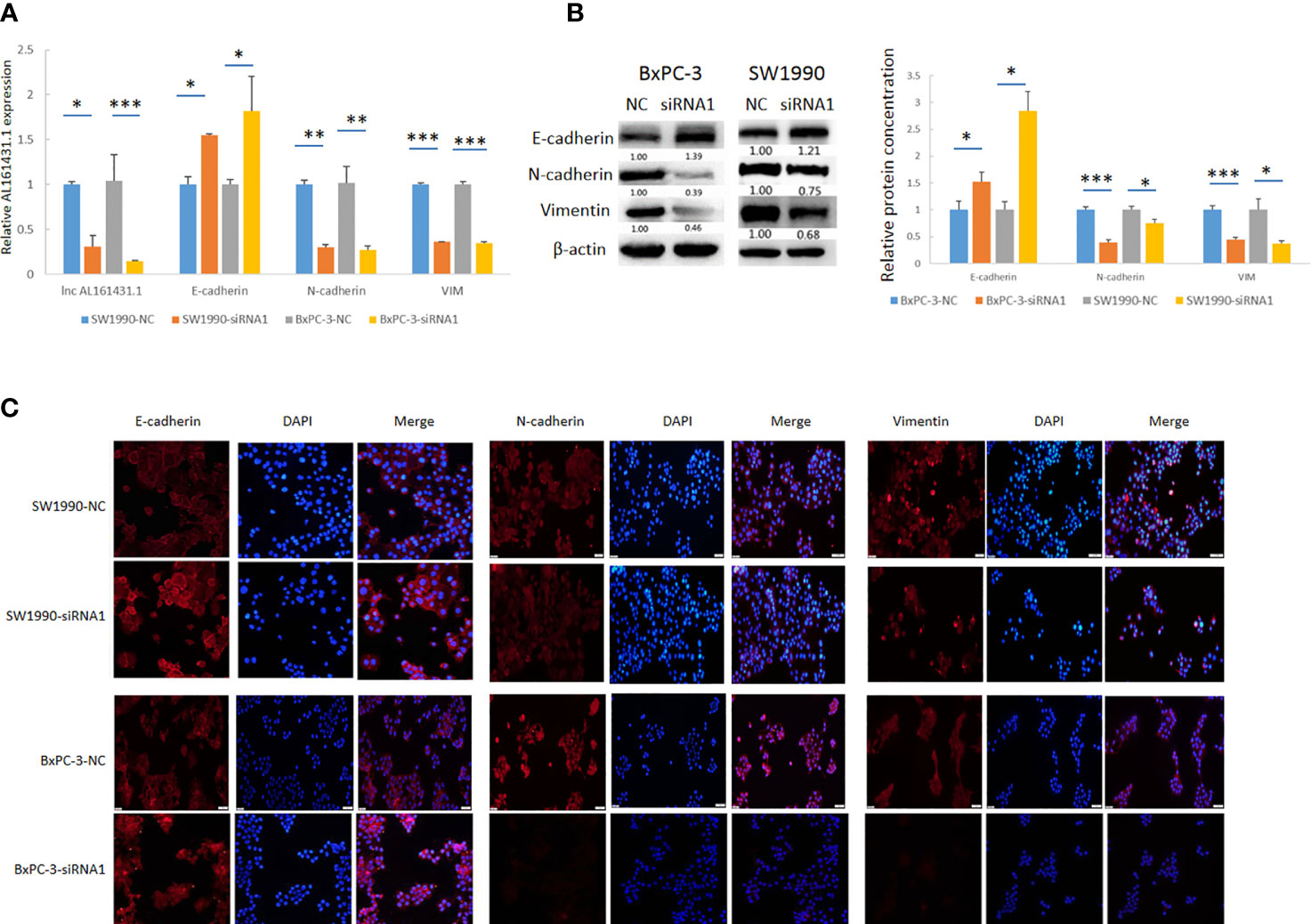 LncRNAs have been shown to be involved in the development and progression of pancreatic cancer. A search using the key words of lncRNA and pancreatic cancer in PubMed on July 28, 2020 yielded 589 publications, with the most relevant one dating back in 2011 (19). Most lncRNAs have been reported to promote the proliferation of pancreatic cancer through different signaling pathways (20–23). In the case of lncRNA AL161431.1, its identified targets include miR-1252-5p, and the pathways include MAPK signaling in endometrial carcinoma and a competing endogenous RNA network in lung squamous cell carcinoma (7, 9; Table S2).

GM and ZL designed the study, analyzed and interpreted patient data, and were major contributors in writing the manuscript. GL and WF performed the cell culture, qRT-PCR and Western blot experiments. YX and SS performed flow cytometry, IF, and IHC experiments. KG performed xenografts experiments. All authors contributed to the article and approved the submitted version.

The Supplementary Material for this article can be found online at: https://www.frontiersin.org/articles/10.3389/fonc.2021.666313/full#supplementary-material

Supplementary Table 2 | The roles of LNC RNA AL161431.1 in different steps/mechanisms of the development and progression of different cancers.

Copyright © 2021 Ma, Li, Fan, Xu, Song, Guo and Liu. This is an open-access article distributed under the terms of the Creative Commons Attribution License (CC BY). The use, distribution or reproduction in other forums is permitted, provided the original author(s) and the copyright owner(s) are credited and that the original publication in this journal is cited, in accordance with accepted academic practice. No use, distribution or reproduction is permitted which does not comply with these terms.