Patients and Methods: Retrospectively, we analyzed 346 women diagnosed with breast tumors. Patients were divided according to the timing of BRCA1/2 PVrecognition, before (BRCA-preDx awareness, N = 62) or after (BRCA-postDx awareness group, N = 284) cancer diagnosis.

Breast cancer is the most prevalent non-cutaneous cancer among women (1). In general, once diagnosed, early and accurate detection of the tumor size and degree of spreading is very important, since treatment in the early stages of the disease can improve the prognosis and save lives (2).

Women who carry a BRCA1 or BRCA2 pathogenic variant (PV) are at an increased risk of developing breast cancer. These women hold a lifetime risk as high as 60% to 90% (3), and also a risk of developing it at younger age than women in the general population (4). Finding BRCA1/2 PV significantly alters medical management (5) and prompts earlier and more frequent screening and risk-reduction surgeries (6).

As part of the high-risk screening, the National Comprehensive Cancer Network’s (NCCN) Guidelines state that for BRCA1/2 carriers, annual magnetic resonance imaging (MRI) and clinical breast exams should start at age 25, and mammograms should start at the age of 30 (7).

There is evidence that for carriers of BRCA2 PV, a combination of MRI screening and annual mammography can have a survival benefit (8, 9). On the other hand, for BRCA1 PV carriers the high-risk screening appears to be less effective. This might be because of the high prevalence of triple-negative breast cancer (TNBC) in BRCA1 carriers, an aggressive subtype with a poor prognosis (10).

Mammography can detect lesions at a minimal size of 1 mm and reveal breast cancer several years before it can be detected in a physical examination (11). MRI is even more sensitive screening modality than mammography alone (11), and the combination of the two is the most sensitive method for detecting breast cancer (12). However, information on the effectiveness of high-risk screening for the BRCA carrier population is limited. Frequent physical examination, mammography, and MRI, starting as early as possible in the high-risk population of BRCA carriers, are commonly used.

Here we aimed to determine whether high-risk screening has the potential to benefit BRCA1/2 PV carrier population.

This retrospective study included 346 high-risk women who were diagnosed with breast cancer in 1996–2020 at the Oncology Department of the Hadassah-Hebrew University Medical Center in Jerusalem. The study focused on patients diagnosed during 1996-2020 due to the data accessibility.

The high-risk women are BRCA1/2 PV carriers. The 346 patients were divided into two groups in order to determine the impact of high-risk screening. The BRCA-preDx awareness group comprised 62 women who knew that they were carriers of BRCA PVs. Therefore, they were offered intensified screening prior to breast cancer diagnosis. The BRCA-postDx awareness group consisted of 284 patients who first were diagnosed with breast cancer and only then they were found to carry BRCA PV. Therefore, the BRCA-postDx awareness group was not under high-risk screening. In 2009, the Israeli Ministry of Health added the reimbursement of annual MRI as a standard screening modality for BRCA1/2 carriers. Therefore, we re-analyzed the data based on a cutoff at 2009 and separated the patients diagnosed before and after 2009 in each group.

Before 2009, the recommended screening included biannual clinical evaluation, breast ultrasound from the age of 25 years or 10 years prior to the age of diagnosis of family member, whatever comes first, and annual mammography from the age of 35 years. After 2009, annual MRI as a standard screening modality for BRCA1/2 carriers.

The Hadassah Institutional Review Board approved the study and all patients gave written informed consent.

Exclusion criteria were prior diagnosis of cancer and high-risk mutation other than BRCA PV.

Association between two categorical variables was tested using the χ2 test and Fisher’s exact test. Continuous variables were compared between two independent groups by use of the two-sample t-test or the non-parametric Mann-Whitney test. The non-parametric test was used for variables that were not normally distributed. The Kaplan-Meier survival model was used for assessing survival, with the log-rank test for the comparison of survival curves. The Cox regression model was applied as the multivariable model for survival. Lead time bias correction was done as described previously (13), it assumes an exponential distribution of the sojourn time, the period during which the tumor is asymptomatic but screen-detectable, with a rate of transition to symptomatic disease λ. Thus, 1/λ is the mean sojourn time and is typically around 4. Duffy calculates an expected additional follow-up time to be subtracted from the calculated time-to-event of the study group. Where T is the last know follow-up time: follow-up correction time = (1-e^(-λT))/λ.

All statistical tests used were two-tailed, and a P-value of 0.05 or less was considered statistically significant. We used SSPS software for the statistical analysis.

Table 1 Characteristics of the study population. 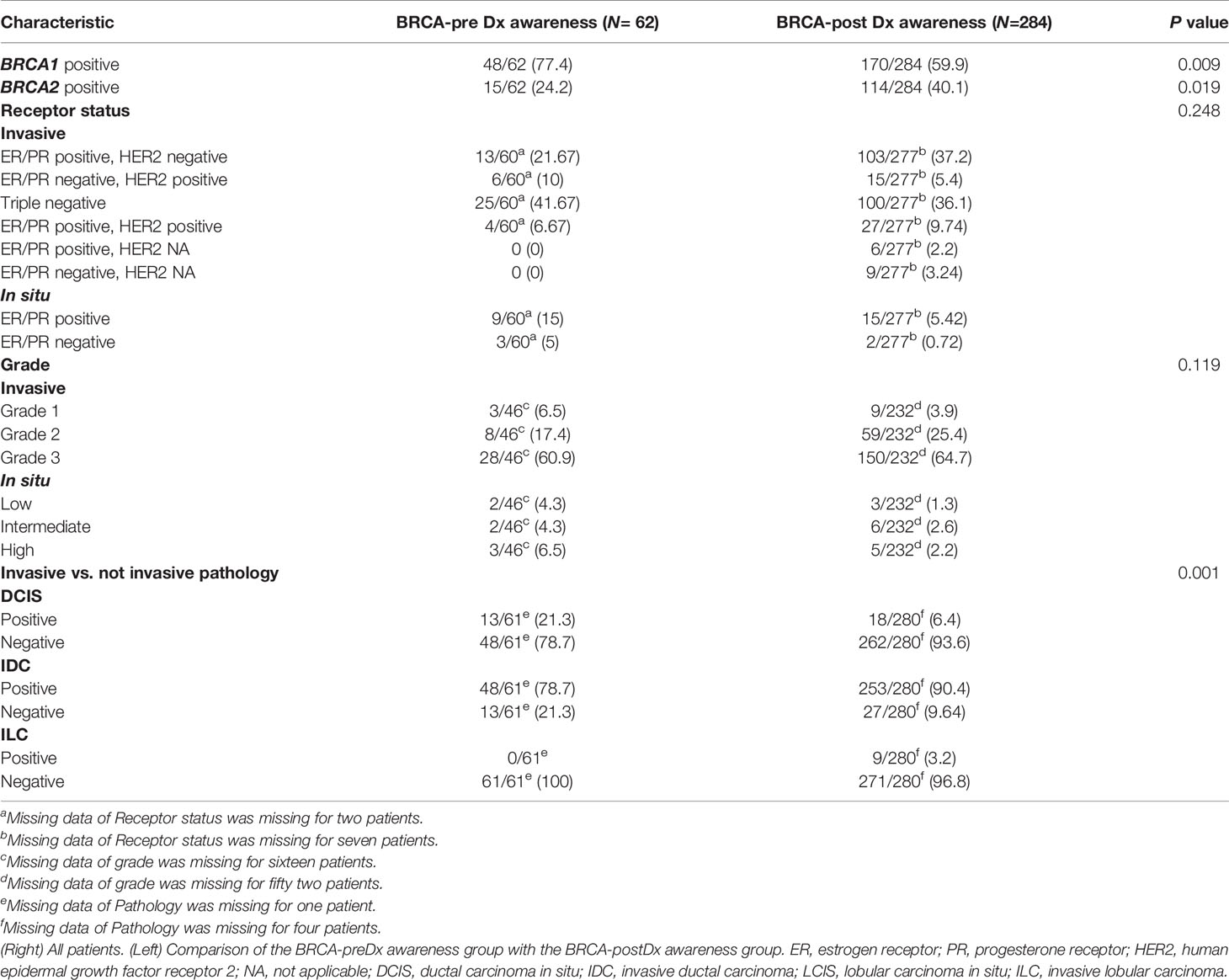 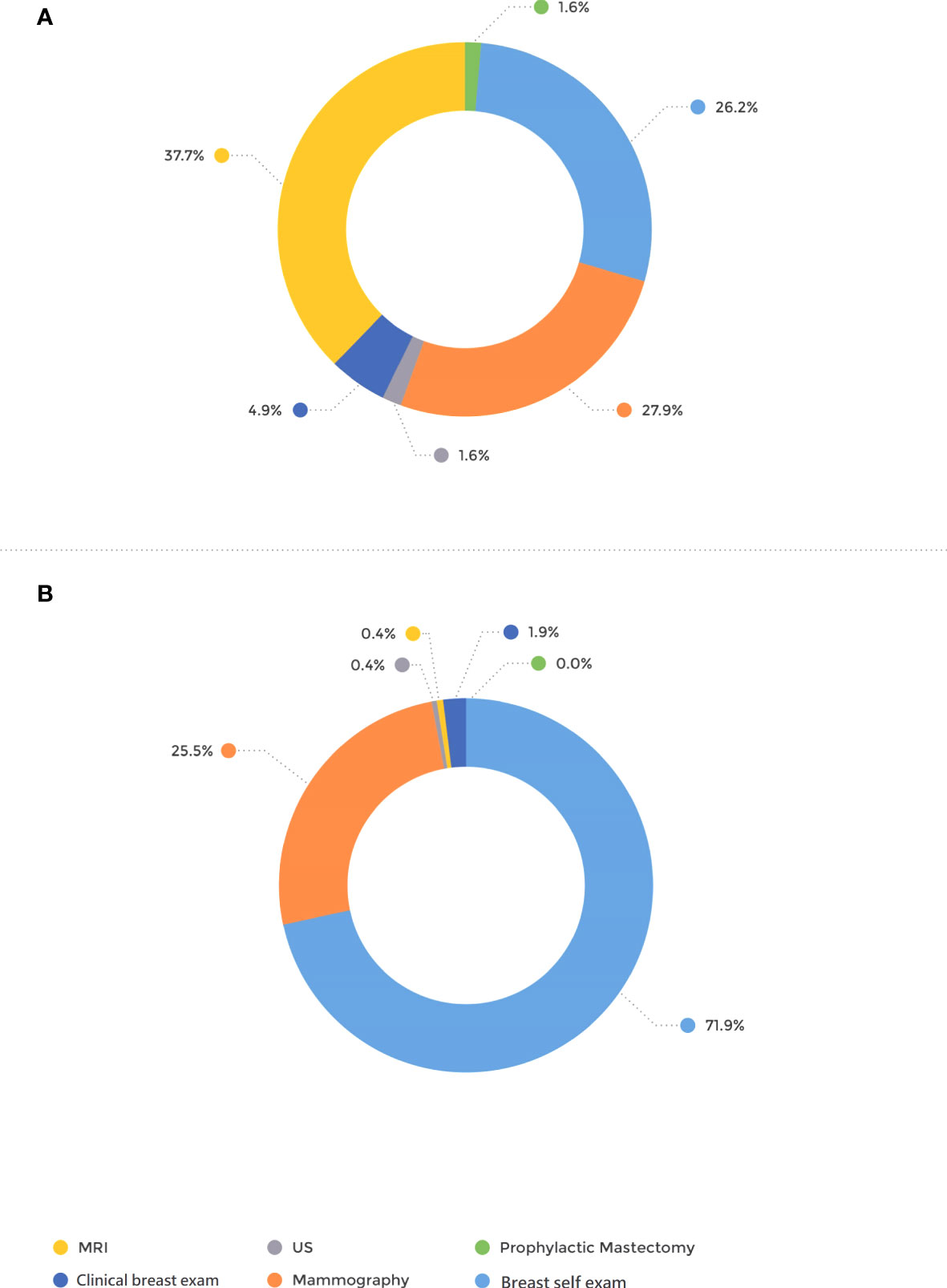 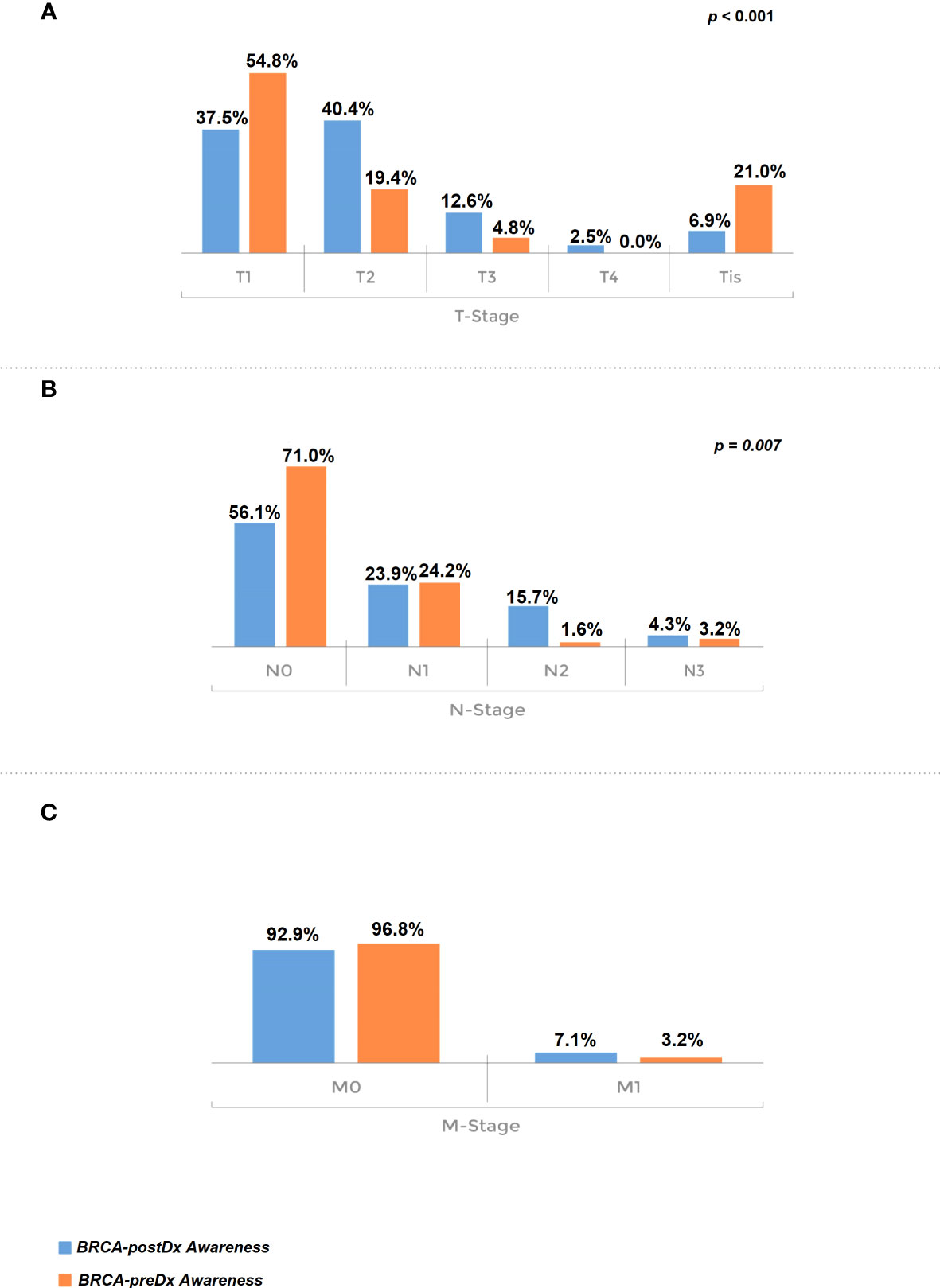 Therapeutic Procedures Among the Study Population

Outcomes Following Inclusion of MRI in the National Health Services 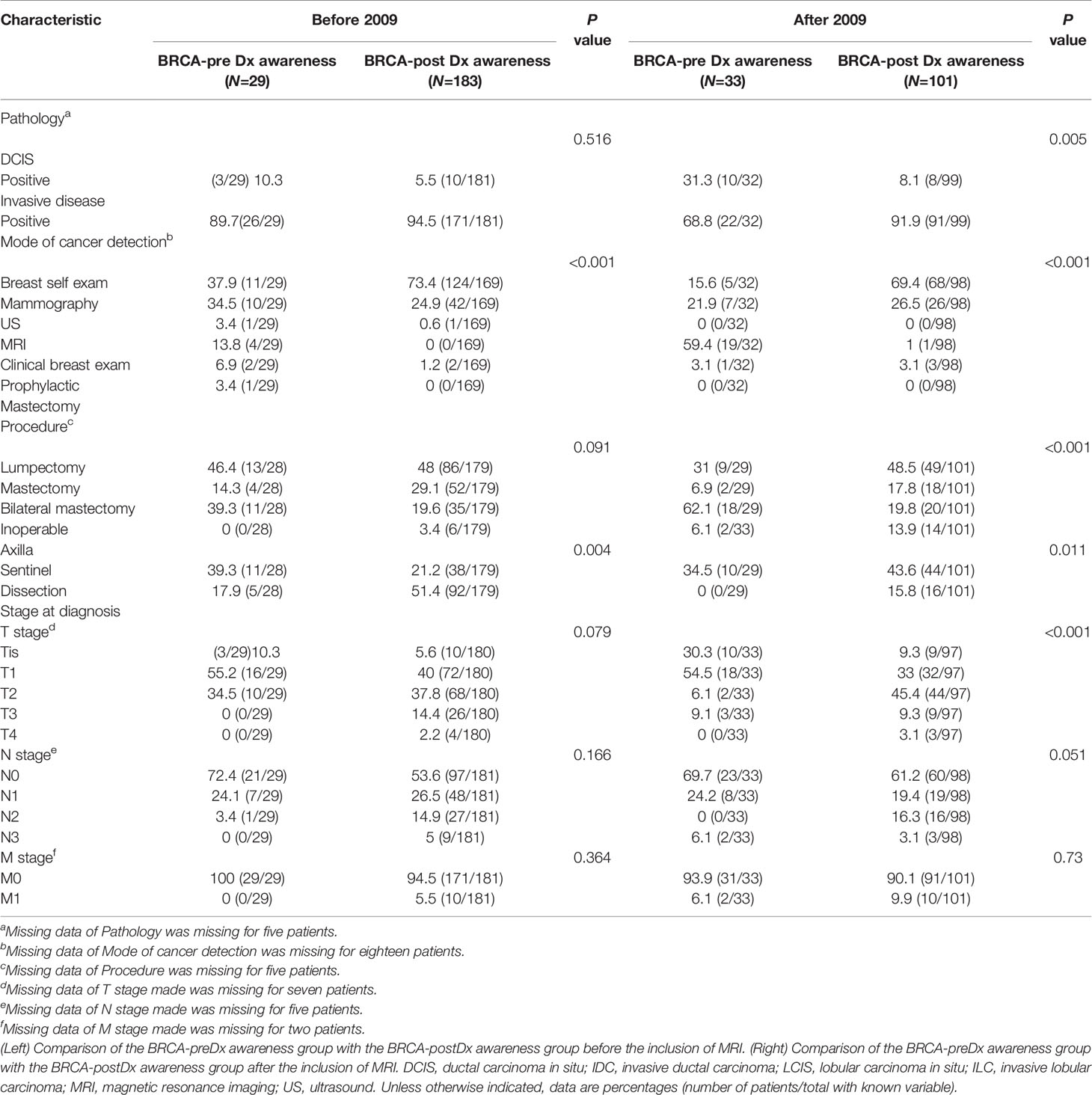 During our study period (1996–2020), 72 patients died. Sixty-six (23.2%) women died in the 238 BRCA-postDx awareness group, compared with six patients (9.7%) from the BRCA-preDx awareness group. In the overall study period analysis, we have found significantly improved survival in the BRCA-preDx awareness group (P = 0.008, Figure 3A). Correction for lead time bias was done and the results remained statistically significant (Supplementary Figure 2, p=0.0135). Further univariate analysis of our data found that there is no statistical difference in survival when patients are divided according to BRCA status (Supplementary Table 1, Supplementary Figure 3). Additional factors which are also significantly associated with improved survival are PR status and TNM staging. In a multivariate analysis, only PR status and M stage were significant (Supplementary Table 1).

In the sub-group analysis, there was no significant different in survival for between the BRCA-preDX group and the BRCA-postDx group prior to 2009 when MRI was not covered (p=0.237, Figure 3B): but there was statistically significant difference in survival after 2009 when MRI introduced (p=0.011, Figure 3C). Young women (age<50) with a diagnosis of breast cancer and BRCA-preDx awareness had improved survival (p=0.01) compared to women who were identified to harbor a BRCA PV after their breast cancer diagnosis (Figure 3D). Among older women (age>50), awareness of their BRCA status before their diagnosis of breast cancer did not improve their survival compared to women identified to have BRCA after their initial diagnosis (p=0.305, Figure 3E).

First, breast cancer in the BRCA-preDx awareness group was more often detected by imaging, mostly MRI, while in the BRCA-postDx awareness group self-palpation was most prevalent. We attribute this difference to the use of MRI in the BRCA-preDx awareness group, as suggested by international guidelines (7, 14) and previous studies that have shown that MRI has superior sensitivity in the BRCA1/2 carrier population (15, 16). Second, we show that more in situ pathology was found in the BRCA-preDx awareness group. Moreover, invasive tumors’ TNM staging was significantly more favorable in the BRCA-preDx awareness group: the tumors were smaller, less axillary involvement and importantly, axillary surgeries were more conservative. These findings are in line with the scientific background on which the current guidelines were established (7): MRI is more sensitive than mammography for women at high risk of developing breast cancer (17–19). The use of combined screening modalities elevates the sensitivity of the examination (15, 19) and can lead to detection at favorable stages compared with mammography alone (20). Additionally, mammography alone has a higher false-negative rate in BRCA PVcarriers (21), in high-density breast tissue (21–23) and in rapidly growing aggressive tumors (24, 25). All of these are more frequent characteristics among high-risk young women (7). To strengthen our findings, sub-analysis using the year of the beginning of widespread use of MRI made the above-mentioned differences even more apparent (e.g., improved staging and more in situ tumors after 2009).

Even though studies show that the addition of MRI is superior to mammography alone in BRCA1/2 carriers in detecting breast cancer, the currently available data has not shown a clear survival benefit from many of the above screening recommendations (16, 26–28). For example, the starting age and the age limit for high-risk screening are not well-known and based on limited observational data (26, 28). The interval time between each screening is also not well established, and there is only partial comparative information regarding different interval durations based on age (15).

A small hint of improved efficacy of high-risk screening was shown in a recent paper by Hadar et al. (29) The authors described a limited population (42 out of 105 BRCA1/2 carriers) who knew that they were BRCA carriers prior to cancer diagnosis, were under high-risk screening, and had better outcomes with a possible survival advantage. Our work shows an interesting improvement in survival in young women who underwent high-risk screening. Taken together, our data imply that the introduction of MRI-based screening was the probable driver behind this survival gain due to its ability to detect smaller tumors.

Our study has several limitations. The compliance with high-risk screening in the BRCA-preDx awareness group patients is largely unknown. We do not have additional information on subsequent procedures (e.g. salpingo-oophorectomy) or therapies such as chemotherapy and hormonal therapies. Additionally, we lack data about cancer recurrence rates in both groups. However, we believe that the long follow-up period compensates for the above-mentioned drawbacks and adds important insights to those from published cohorts (16).

In summary, our data emphasize the importance of high-risk MRI-based screening among BRCA1/2 PV carriers. This study shows a favorable effect on staging for women who have had awareness of their BRCA status before cancer diagnosis and had participated in intensified screening. Further studies are needed to refine the optimal screening protocols to maximize the survival benefit from high-risk screening programs.

The studies involving human participants were reviewed and approved by Hadassah Medical Center IRB. The patients/participants provided their written informed consent to participate in this study.

ALG was supported by the 2020 Conquer Cancer-ICRF Career Development Award.

The Supplementary Material for this article can be found online at: https://www.frontiersin.org/articles/10.3389/fonc.2021.683656/full#supplementary-material

Copyright © 2021 Shraga, Grinshpun, Zick, Kadouri, Cohen, Maimon, Adler-Levy, Zeltzer, Granit, Maly, Carmon, Meiner, Sella, Hamburger and Peretz. This is an open-access article distributed under the terms of the Creative Commons Attribution License (CC BY). The use, distribution or reproduction in other forums is permitted, provided the original author(s) and the copyright owner(s) are credited and that the original publication in this journal is cited, in accordance with accepted academic practice. No use, distribution or reproduction is permitted which does not comply with these terms.