Cancer of Pharyngoesophageal Junction: A Different Subtype From Hypopharyngeal and Cervical Esophageal Cancer?

Background: Squamous cell cancers in the hypopharynx (HP) and cervical esophagus (CE) are different diseases with different staging systems and treatment approaches. Pharyngoesophageal junction (PEJ) tumor involves both the hypopharynx and the cervical esophagus simultaneously, but few reports focused on PEJ tumors. This study aimed to clarify clinical characteristics and the treatment approaches of PEJ tumors.

Different treatment approaches should be delivered to patients with HP or CE cancers. Surgical resection is the cornerstone of the treatment of HP cancer, and partial or total laryngopharyngectomy with at least level II–IV and level VI lymph node dissection is believed to be the appropriate surgical approach. Definitive radiotherapy is used for unresectable tumors or those unfit for surgery, and primary tumor and the involved lymph nodes (local subclinical infiltration at the primary site and at the high-risk level lymph nodes included) should be given a total dose of 66–70 Gy at 2.0–2.2 Gy per fraction (2). For CE cancers, due to limited space for surgery, definitive chemoradiation is the first choice. The total dose should be 50.0–50.4 Gy at 1.8–2.0 Gy per fraction for the primary tumor, and involved regional lymph nodes with or without elective nodal regions (supraclavicular lymph nodes, etc.) and higher doses may also be appropriate (60–66 Gy) according to the NCCN guideline.

Advanced HP tumors involve the pharyngoesophageal junction in more than 30% of the cases (3), whereas 16.4%–22.5% of the CE cancers arise due to pharyngoesophageal junction (4, 5). Pharyngoesophageal junction (PEJ) tumors are defined as tumors involving simultaneously both the hypopharynx and the cervical esophagus. New problems are put forward on the tumor biology, classification systems, and treatment approaches of PEJ tumors. However, few studies on PEJ cancer were reported. Therefore, we collected the patients with squamous cell carcinoma in the HP, PEJ, and CE at the Department of Radiation Therapy of Fudan University Shanghai Center between January 2008 and June 2018, in order to clarify clinical characteristics, the treatment approaches, and the survival of PEJ tumors. 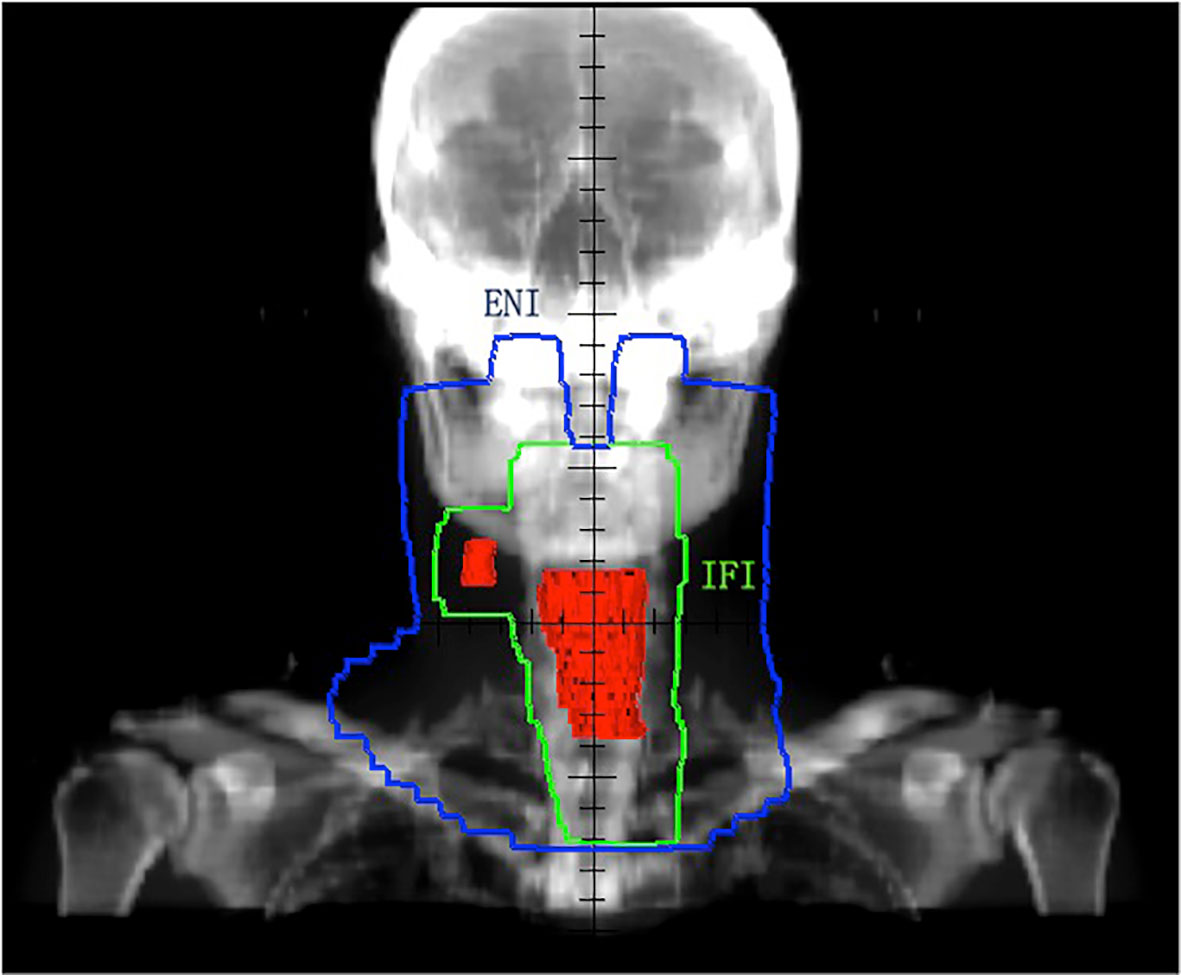 Progression-free survival (PFS) and overall survival (OS) were defined as the time from the diagnosis to the first detection of tumor progression, and death from any cause or last follow-up, respectively. The demographic of patients and tumor characteristics were summarized with descriptive statistics. Categorical variables were analyzed by the Pearson chi-square test, and continuous variables were analyzed by the one-way ANOVA test. Survival estimation and comparison among different variables were performed using the Kaplan–Meier method. A two-sided p value of <0.05 was considered statistically significant. All statistical analyses were performed using SPSS 19.0 (SPSS, Chicago, IL, USA). Survival curves were drawn with GraphPad Prism 6.0 (GraphPad Software, San Diego, CA, USA).

A total of 222 patients were enrolled, of which 49 cases were diagnosed with HP cancer, 70 cases with PEJ cancer, and 103 cases with CE cancer. All patients were predominantly male (95.9%, 91.4%, and 71.8% in the HP, PEJ, and CE groups, respectively), and patients with CE cancer were older than those with HP and PEJ cancer. Most patients were diagnosed with locally advanced disease, and nearly half or more HP and CE tumors were T3–4 stage. For PEJ tumor, 74.3% tumors were T4 stage and the rest of the tumors were T3 stage. The gross tumor volumes of PEJ cancers were much greater than those of HP or CE cancers (p < 0.001), indicating that PEJ cancers were more advanced than HP or CE cancers (Table 1). 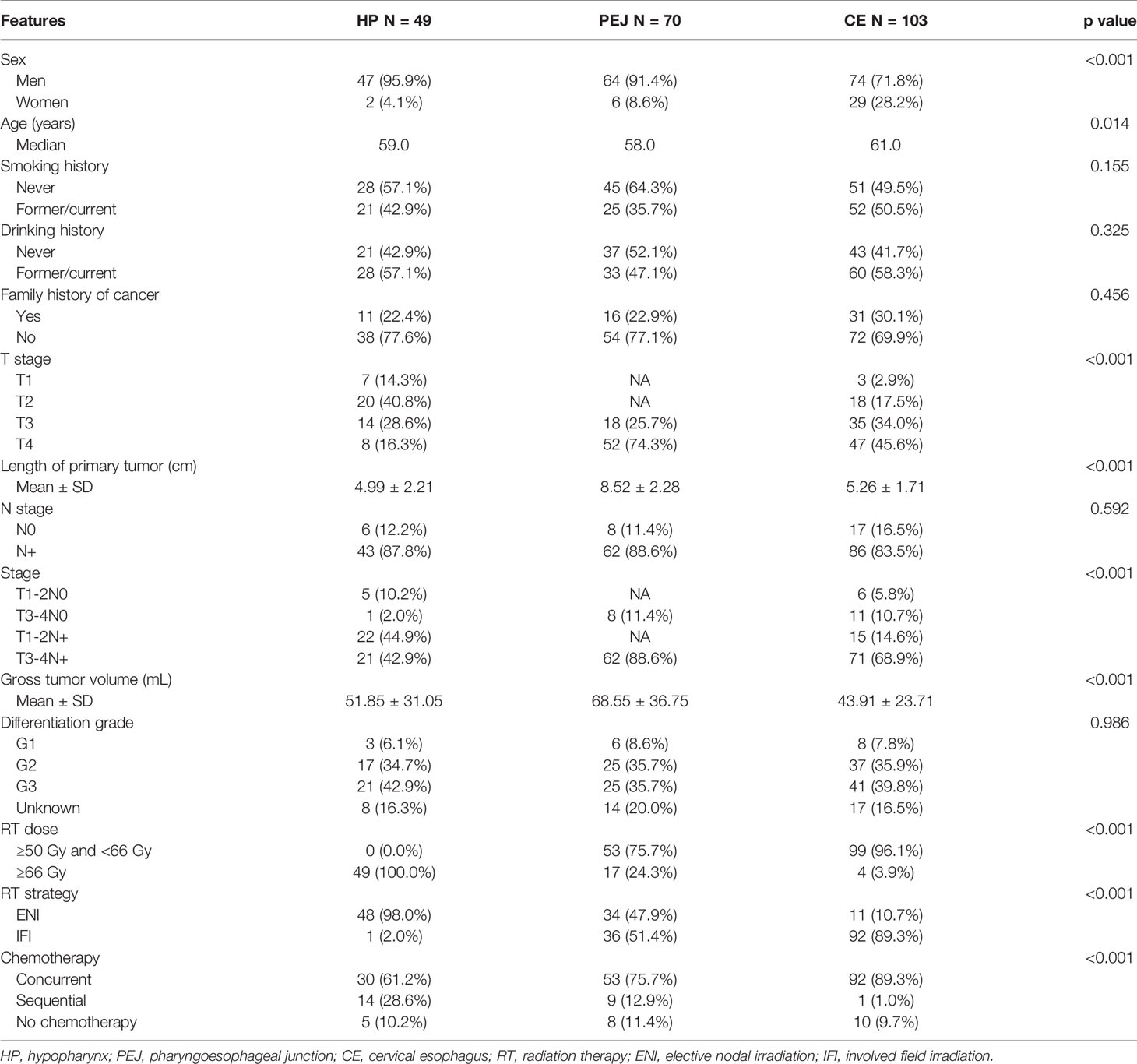 Similar proportions of patients were diagnosed as lymph node positive with HP (87.8%), PEJ (88.6%), and CE (83.5%) tumors, but different metastatic patterns were seen in different primary tumors. A detailed positive lymph node distribution is shown in Table 2 and Figure 1.

Among lower cervical lymph node regions (level IV and V in the neck), the probability of lymph node metastases of for all three cancers was similar, which was 36.7% for HP cancer, 42.9% for PEJ cancer, and 35.0% for CE cancer, respectively.

As for IFI or ENI subgroups among the PEJ population, there were no statistical differences between IFI and ENI subgroups of PEJ cancer in sex, age, T and N stage, primary tumor length, and gross tumor volumes, except for planning target volumes (Table S2). 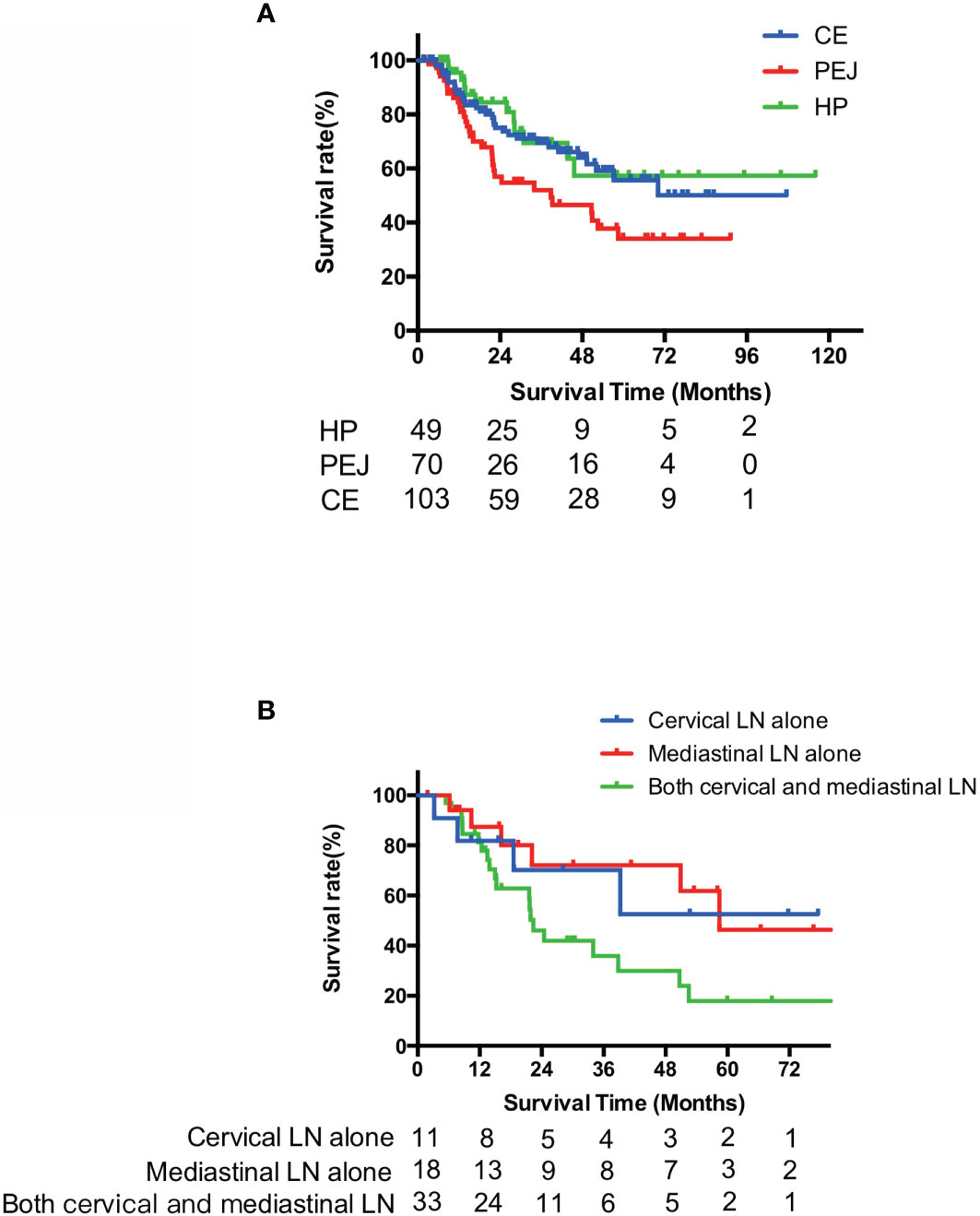 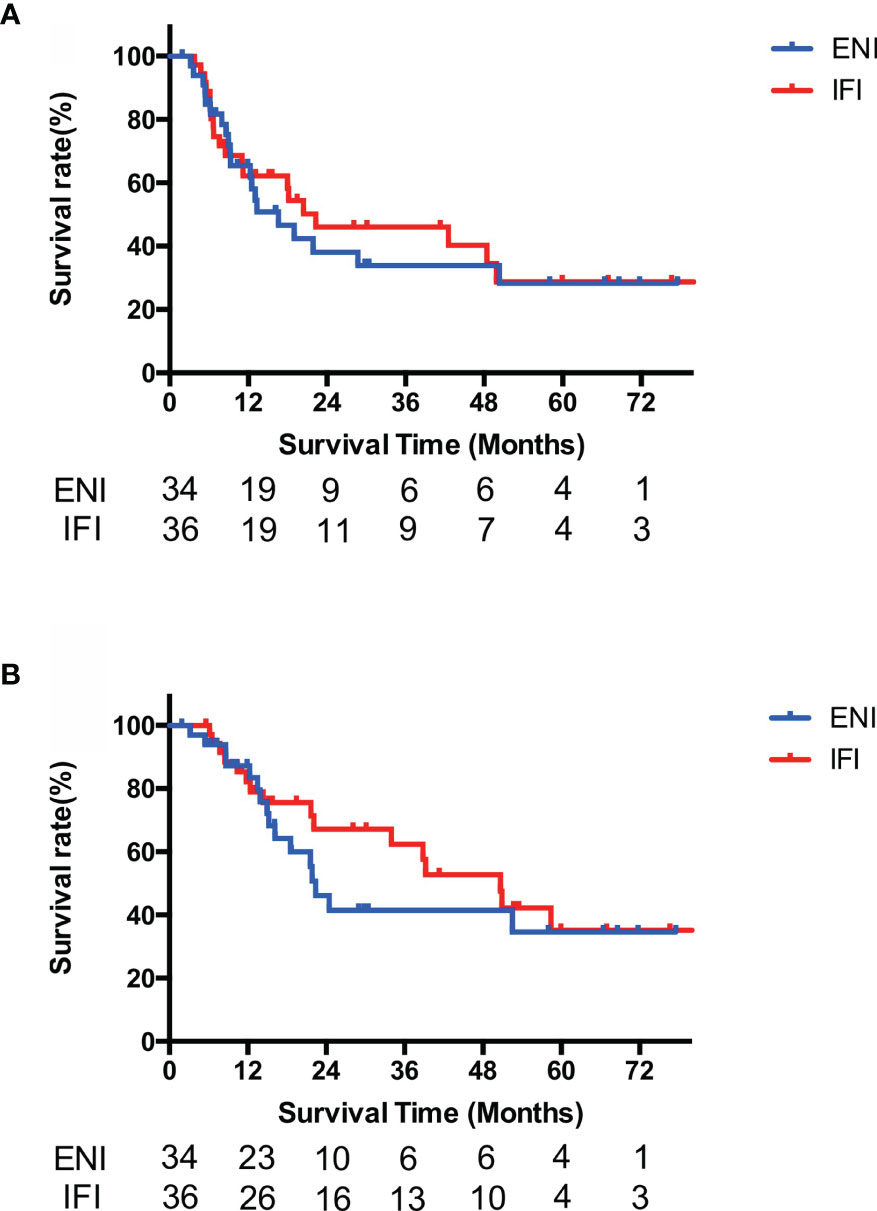 This retrospective study is the first time to reveal the clinical characteristics, patterns of lymph node metastasis, and prognosis of different radiotherapy delineations in PEJ cancer in detail. PEJ cancer was found to be extremely aggressive, which involved not only HP and CE concurrently but also trachea, thyroid gland, and larynx at a very high incidence. In this study, we compared patterns of lymph node metastasis and survival of HP, CE, and PEJ cancers and different radiotherapy approaches for PEJ cancers.

In this study, we observed that PEJ cancer had a worse OS than HP and CE cancer. The results were in correspondence with other reports. Kim et al. demonstrated that esophageal invasion was a poor prognostic factor of 5-year disease-specific survival in patients with T4a hypopharyngeal cancer treated by surgery (9). Zhang et al. observed that hypopharyngeal extension of the CE cancer was significantly associated with 3-year PFS (p = 0.021) (5). Worse prognosis of PEJ cancers might be associated with more advanced diseases due to the definition of PEJ tumors and multiple lymphatic drainages of PEJ tumors.

Surgery for PEJ cancers, which included PLE and reconstruction, was always accompanied by high postoperative complications and mortality rates. In a retrospective study, Wang et al. reported that postoperative mortality and morbidity rates were 9.8% and 46.3%, respectively (10). Chemoradiotherapy, as another initial treatment for PEJ cancer, had potential for larynx preservation and a lower rate of acute morbidity and mortality compared with surgery. In this study, we excluded surgical patients because different surgical methods and technical levels lead to more bias. The exclusion led to smaller differences within the study group, but at the same time more advanced patients were enrolled in the study. However, patients with PEJ cancer who underwent chemoradiotherapy had a relatively preferable survival outcome. Therefore, chemoradiotherapy could be feasible for organ preservation in patients with PEJ cancer.

Due to the low incidence of PEJ cancer, there was no consensus on the delineation of the clinical target volume. In the analysis of the two delineation modes that was performed in PEJ cancer patients, no statistical differences were found in both OS and PFS between the ENI group and IFI group, as well as the rate of in-field recurrence and out-field metastasis.

Since the radiation target volume was larger in the ENI group, patients treated with ENI showed a significantly increased risk of high-grade late toxicities than with IFI (16% vs. 8%, p = 0.047) for esophageal cancers (11). The myelosuppression occurred more severely in the ENI group than in the IFI group during concurrent chemoradiotherapy, which may result in lower completion rate in the ENI group so as to weaken the survival benefits. Moreover, patients in the IFI group might gain more opportunities of salvage radiation after regional node failure, which may lead to a better prognosis (12).

The datasets presented in this article are not readily available because of the regulations of our center. Requests to access the datasets should be directed to KZ, kuaile_z@sina.com.

The study was approved by the Ethics Committee of the Fudan University Shanghai Cancer Center. All participants provided written informed consent.

The Supplementary Material for this article can be found online at: https://www.frontiersin.org/articles/10.3389/fonc.2021.710245/full#supplementary-material

Copyright © 2021 Li, Ai, Chen, Liu, Deng, Zhu, Wang, Wan, Xie, Chen, Chen, Fan, Wang, Lu, Ying, He, Hu and Zhao. This is an open-access article distributed under the terms of the Creative Commons Attribution License (CC BY). The use, distribution or reproduction in other forums is permitted, provided the original author(s) and the copyright owner(s) are credited and that the original publication in this journal is cited, in accordance with accepted academic practice. No use, distribution or reproduction is permitted which does not comply with these terms.