The Prognostic Significance of PD1 and PDL1 Gene Expression in Lung Cancer: A Meta-Analysis

Background: Immune checkpoint blockade therapy represents an extraordinary advance in lung cancer treatment. It is important to determine the expression of immune checkpoint genes, such as programmed cell death 1 (PD1) and programmed cell death-ligand 1 (PDL1), to develop immunotherapeutic strategies. The aim of this study was to explore the association between PD1 and PDL1 gene expression and prognoses and outcomes in lung cancer.

Methods: This meta-analysis analyzed 1,251 patients from eight different microarray gene expression datasets and were evaluated for their prognostic implications and verified using another independent research.

Lung cancer, especially non-small-cell lung cancer (NSCLC), is the most common cause of cancer-related deaths in the United States and worldwide (1). According to the Cancer Registry Annual Report, 2016, Taiwan (2), the lung cancer age-standardized mortality was 24.02 per hundred thousand and was the highest among the top ten cancer death rates in Taiwan. Approximately 64.46% of lung cancer patients are late-stage NSCLC patients.

Immunotherapy is a new treatment strategy for cancer. The key factor is to strengthen the patient’s immune system to fight the disease (3). Among the many immunotherapeutic strategies, immune checkpoint blockade has numerous advantages in the treatment of many types of cancer. Immune checkpoint blockade enhances antitumor immunity by blocking innate down regulators of immunity, such as cytotoxic T-lymphocyte antigen 4 (CTLA-4) (4) and programmed cell death 1 (PD1) or its ligand, programmed cell death ligand 1 (PDL1) (5). PD1 belongs to the CD28 family and is a coinhibitory surface receptor expressed on activated T cells. It is also expressed on B cells, natural killer (NK) cells, and myeloid-derived suppressor cells (MDSCs) (6–9). PDL1 is the ligand of PD1 and is expressed by antigen-presenting cells and tissue cells, including cancer cells (10–12). The PD1/PDL1 pathway negatively regulates the immune response by inhibiting T cell activation and proliferation, reducing cytokine production, and enhancing CD8 (+) T cell depletion in the tumor microenvironment (13, 14).

Many studies have suggested that PD1/PDL1 play an important role in cancer progression. The association between PD1/PDL1 in different subtypes of cancer, such as pulmonary pleomorphic carcinomas and pulmonary adenocarcinoma or squamous cell carcinoma, or in different clinical cancer stages is still not clear. To further address the relationship between PD1/PDL1 gene expression and different cancer subtypes and the different outcomes associated with different cancer stages, we examined lung cancer microarray datasets with a meta-analysis.

Eight research datasets and one validation cohort GES157011 were collected for verification (Supplement Table 1) (30–37) and were restricted to publications with microarray gene expression data and clinical characteristics by using the keywords “Microarray”, “GPL570 (the alternative name of the microarray platform)”, “Lung cancer”, “Clinical information” and “Survival or Relapse status’’ in a search of the Gene Expression Omnibus (GEO, http://www.ncbi.nlm.nih.gov/geo/). The study cohort was combined and stratified by histology, adenocarcinoma (AD) vs. squamous cell carcinoma (SC). The variables of interest in this study included type (normal vs. tumor tissue), sex (female vs. male), smoking history (no vs. yes), stage (early: 1 vs. late: 2 + 3+4), EGFR mutation status (no vs. yes), relapse (no vs. yes) and survival status (alive vs. dead).

An empirical Bayes method was used to adjust for batch effects in the eight publicly available gene expression datasets (38). The log hazard ratios (HRs) and standard errors (SEs) of the Cox regression model were determined for the fixed effects and the random effects models and for the inverse-variance-weighted method for the meta-analyses. The overall effect determined by the random effects model was significant. Forest plots were constructed to visualize the results. Parameter estimates of all the single studies and the pooled estimates with their confidence intervals were calculated based on the data provided in the plots in Supplement Figure 1.

All statistical analyses were conducted using SAS version 9.4 (Cary, North Carolina). A p-value less than 0.05 was considered statistically significant. The expression levels of PD1 and PDL1 genes and different clinicopathological features were described as the mean ± standard deviation (SD) and the median. The results of statistical analyses were examined against those of an independent t-test for the mean and a Mann-Whitney U test for the median. Receiver operating characteristic (ROC) curves were constructed to calculate an optimal cutoff point to differentiate high or low expression of the PD1 and PDL1 genes. Based on these cutoffs, quantitative measurements of the expression levels of individual genes were converted into binary measurements to help examine whether high or low expression of these genes could be associated with lung cancer progression using progression-free survival (PFS) and overall survival (OS) as outcomes of interest. Survival curves were plotted by using Kaplan–Meier (KM) unadjusted estimation curve analysis. The significance of these associations was assessed using the log-rank test.

The hazard ratio (HR) was reported for the Cox regression model, with corresponding 95% confidence intervals (CIs) and p-values. Because the expression of the two genes was different, several analyses of HRs were performed in the overall histology combined cohort, including the cohort stratified by histology and the cohort analyzing the interaction between stage (early vs. late) and histology.

Figure 1 Flow chart summarizing the search process for the identification of eligible datasets. 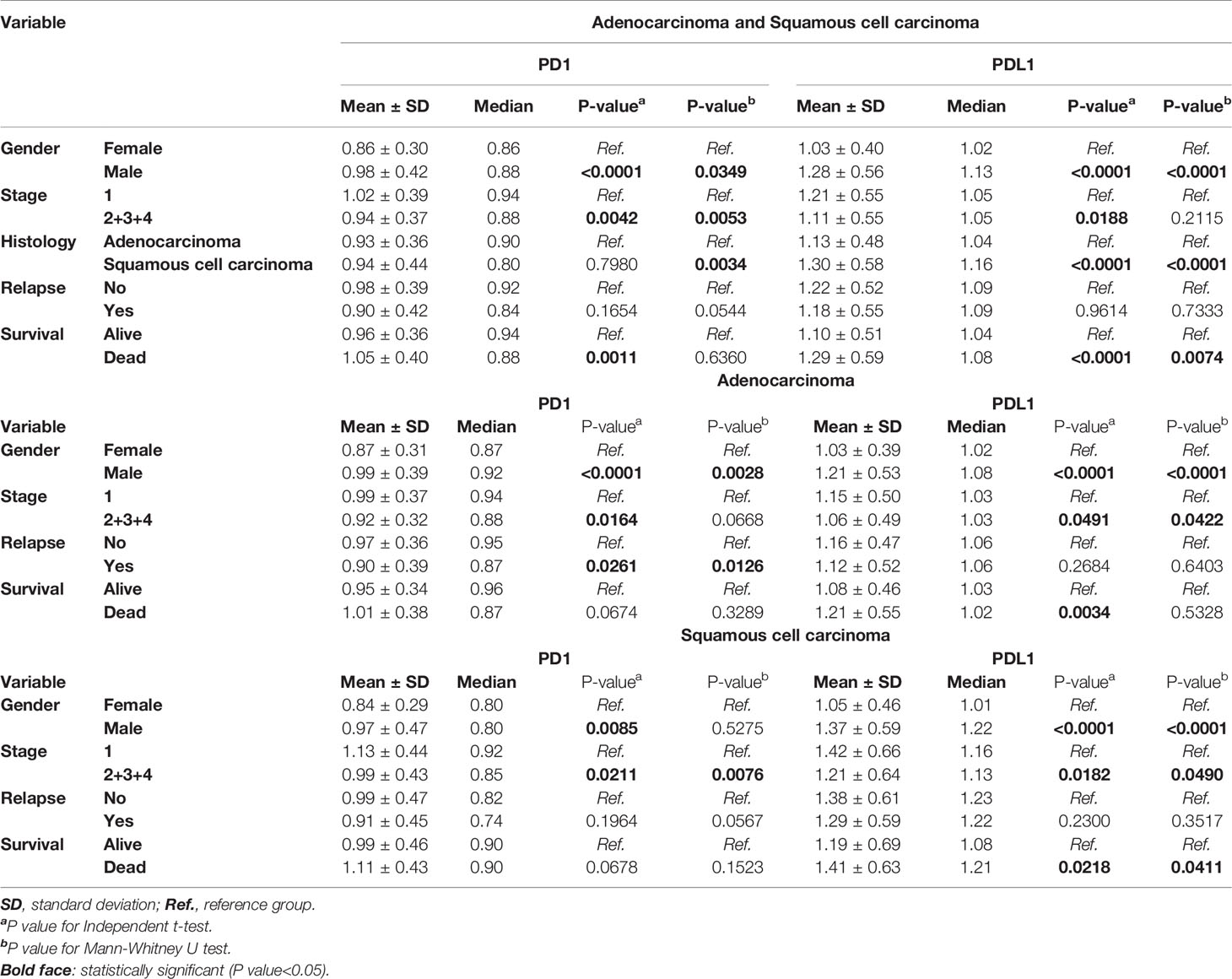 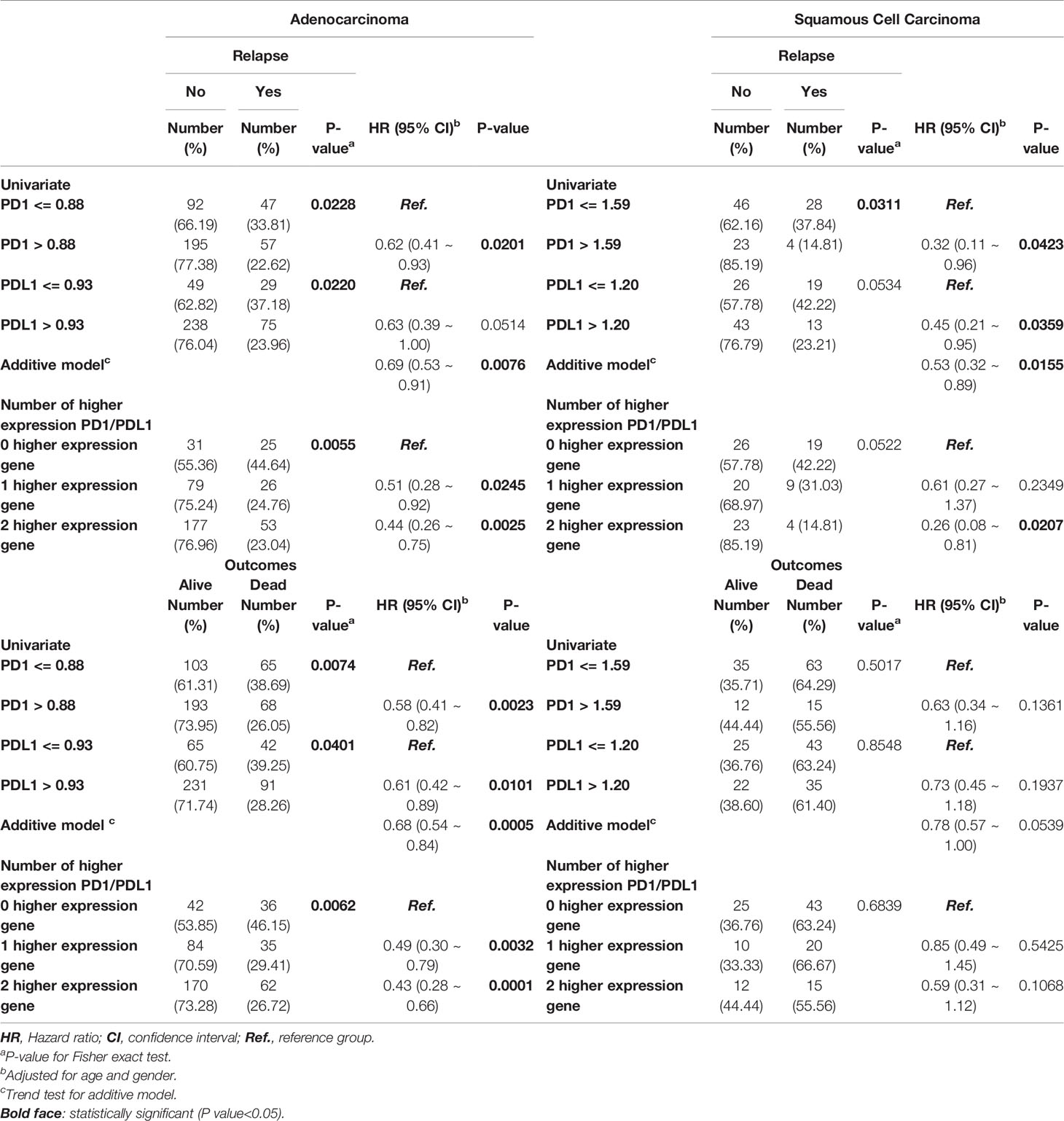 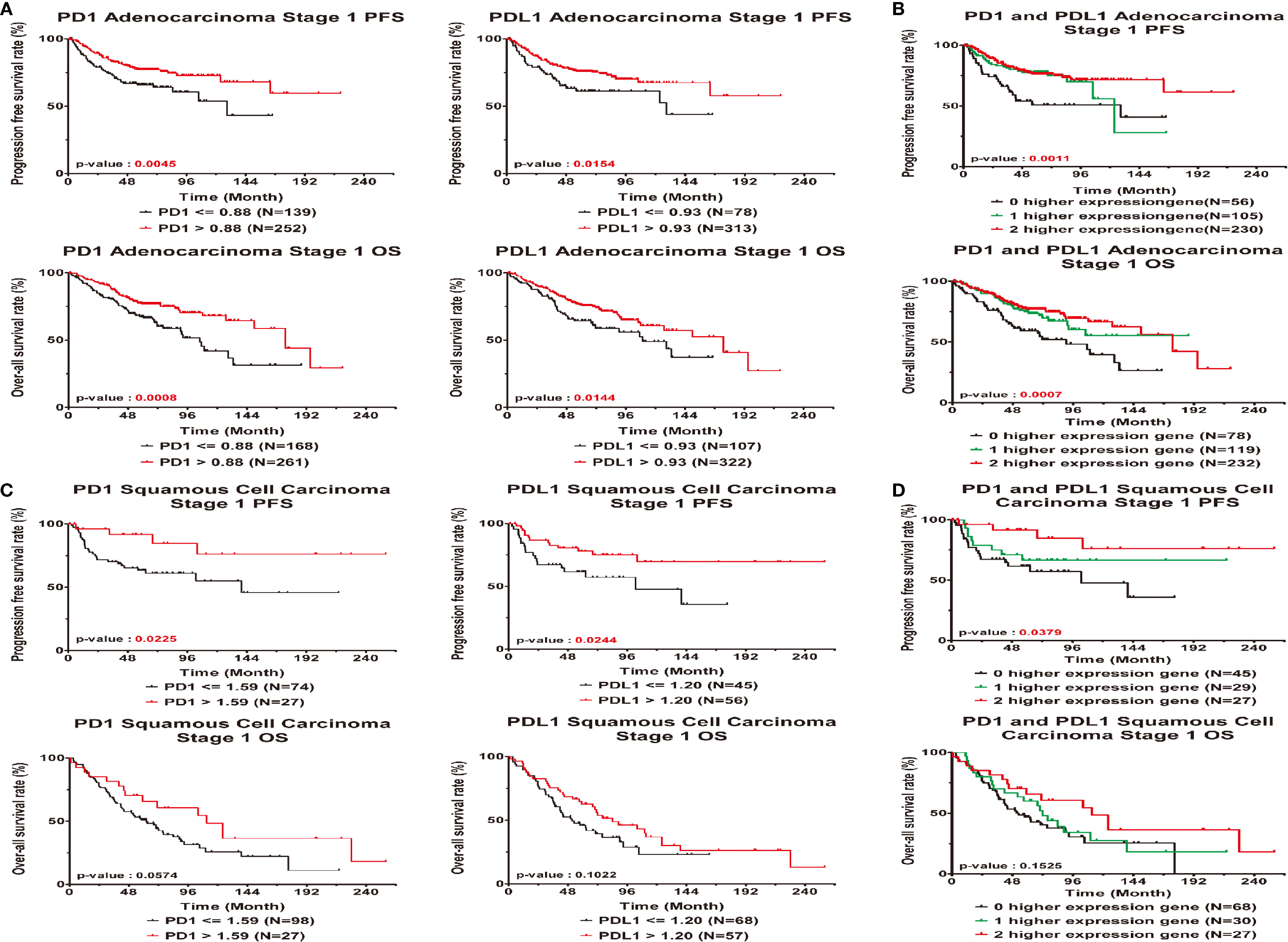 Figure 2 Prognostic correlated with expression levels of PD1 or PDL1 in early stage lung cancer patients. Kaplan-Meier statistical analyses were conducted to examine the association between progression-free survival (top), over-all survival (bottom) and the expression of PD1 and PDL1 in adenocarcinoma (A), squamous cell carcinoma (C), the number of higher expressed genes (B, D) in all patients. 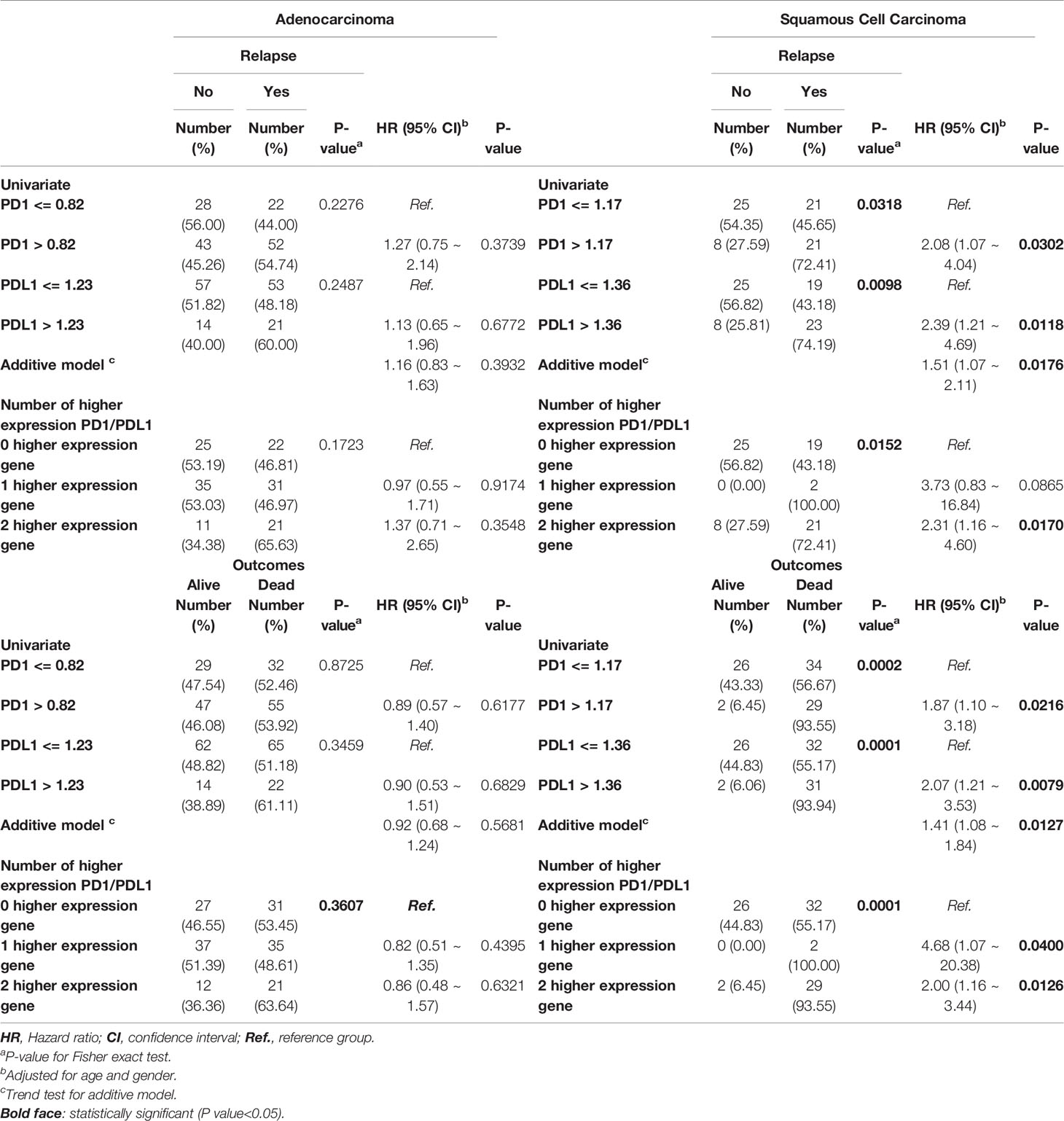 Figure 3 Clinical outcome interacted with expression levels of PD1 or PDL1 in late stage lung cancer patients. Kaplan-Meier statistical analyses were conducted to examine the association between progression-free survival (top), over-all survival (bottom) and the expression of PD1 and PDL1 in adenocarcinoma (A), squamous cell carcinoma (C), the number of higher expressed genes (B, D) in all patients. 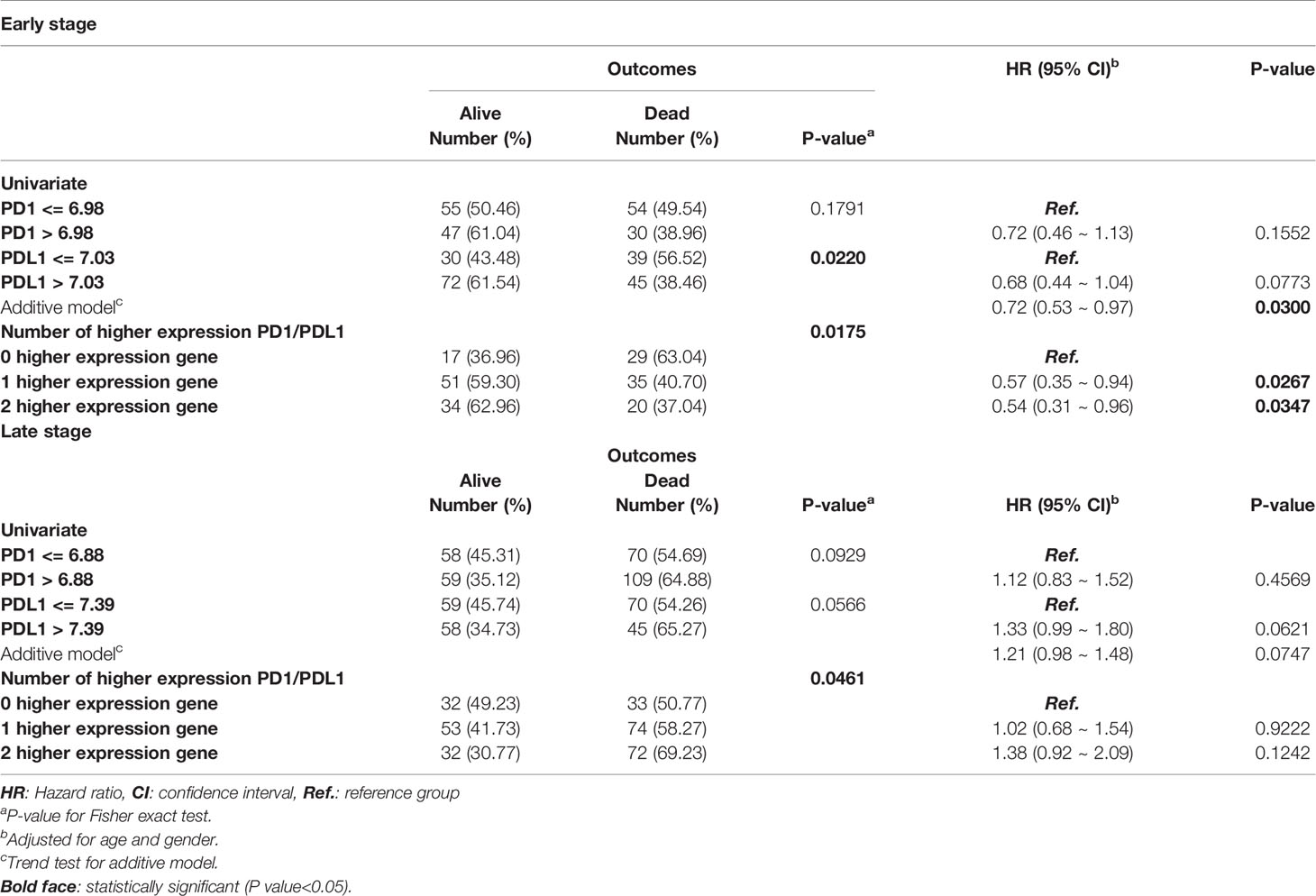 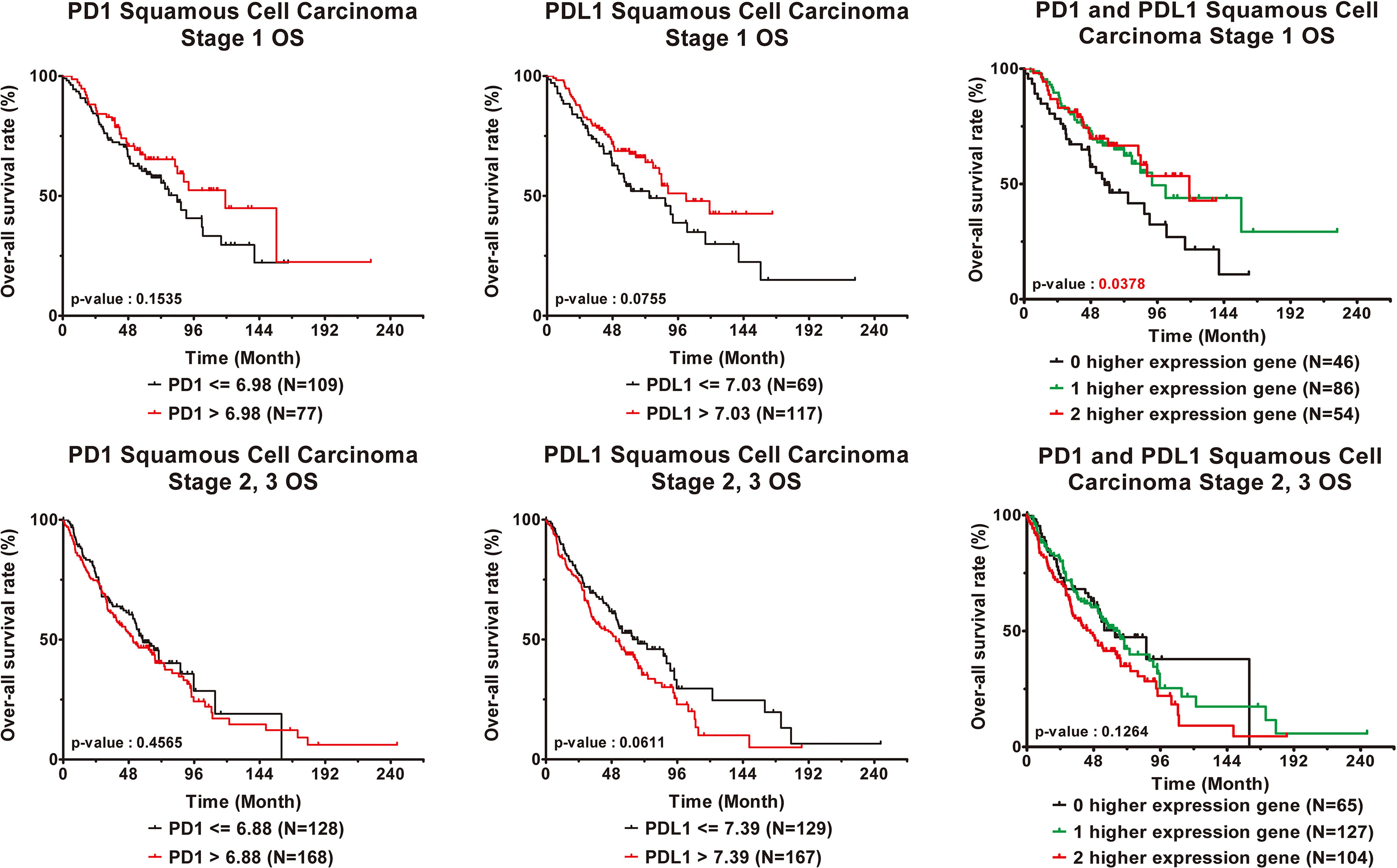 Lung cancer is the major cause of mortality worldwide (1). This study supports that PD1/PDL1 gene expression is a predictor of lung cancer prognosis in early- and late-stage NSCLC.

We examined the relationship between PD1/PDL1 and clinical outcomes in the different cancer subtypes. All analyses were meta-analyses, and to minimalize the differences between the eight collated microarray databases, an empirical Bayes method was used to adjust for batch effects in the eight publicly available gene expression datasets (38).

The PD1/PDL1 axis is a checkpoint in immune cells. It normally acts as a type of “off switch” that helps keep T cells from attacking other cells in the body. When PD1 attaches to PDL1, it directs the T cell to ignore the other cell. PD1/PDL1 immune checkpoint blockade mechanisms inhibit this binding and boost the immune response against cancer cells. The PD1 inhibitors, nivolumab and pembrolizumab, and the PDL1 inhibitors, atezolizumab, avelumab and durvalumab (41), unleash antitumor immunity to achieve therapeutic effects (3).

The findings of this study agree with the results (28, 29) that higher PD1/PDL1 gene expression had better prognosis in the early stage among AD and SC lung cancer patients. Furthermore, we observed that higher PD1/PDL1 gene expression turned into the risk factors for worse clinical outcomes among the late stage AD and SC lung cancer patients. When exploring the relationship between higher gene number and prognosis or outcomes, we found that for most, but not all, the higher gene expression and higher number of expression genes are more likely to bind together, therefore, the blocking mechanism avoids triggering the anti-tumor immunity, which causes the cancer cell to remain active in the body.

The limitation of this study was that only eight microarray databases were available for the search strategy. Nevertheless, the study was statistically well adjusted. Our meta-analysis of eight different lung cancer studies demonstrates the impact of PD1/PDL1 gene expression on NSCLC prognosis. Importantly, our analyses indicate that late-stage NSCLC patients with high expression of PD1 and PDL1, either individually or jointly, tend to suffer a greater risk of recurrence or death than patients with early-stage NSCLC. Conversely, in early-stage NSCLC patients, high gene expression is associated with a favorable clinical outcome. Therefore, our results support that PD1 and PDL1 are valuable markers for the prognostication of NSCLC.

The Supplementary Material for this article can be found online at: https://www.frontiersin.org/articles/10.3389/fonc.2021.759497/full#supplementary-material

Copyright © 2021 Chang, Shih, Chang, Chen, Chao and Hsu. This is an open-access article distributed under the terms of the Creative Commons Attribution License (CC BY). The use, distribution or reproduction in other forums is permitted, provided the original author(s) and the copyright owner(s) are credited and that the original publication in this journal is cited, in accordance with accepted academic practice. No use, distribution or reproduction is permitted which does not comply with these terms.