960th Hospital of the PLA, China

Plasmablastic lymphoma (PBL) is an aggressive B-cell lymphoma with plasmablastic features that occurs in immunodeficient patients and is usually associated with Epstein-Barr virus (EBV) infection. It was first reported as lymphoma of the oral cavity in a human immunodeficiency virus (HIV)-infected patient (1). However, many cases have since then been reported that involve different localizations while also occurring in patients who are HIV-negative (2).

Plasma cell myeloma (PCM) is a plasma cell neoplasm that commonly produces monoclonal immunoglobulin (M-protein). Some cases of extraosseous PCM showing severe atypia are classified as plasmablastic PCM (PPCM). It is often difficult to differentiate between PBL and PPCM (Supplemental Table 1) (3); thus, in such cases, a diagnosis of plasmablastic neoplasm (PBN) is made (4). There have been several reports of cases of PBL or PBN containing neoplastic multinucleated giant cells (5–7).

Recent in vitro and in vivo studies mainly conducted in cases of ovarian cancer have proposed the hypothesis that multinucleated giant cells serve as cancer stem cells and are associated with resistance to chemotherapy and the potential for metastasis (8, 9). To the best of our knowledge, this hypothesis has not been tested using surgical pathological analysis.

Herein, we present a case of PBN predominantly consisting of mononuclear cells with admixed multinucleated giant cells that were analyzed for stemness to test the above hypothesis.

A man in his 80s presented to our hospital with a chief complaint of a cervical mass. He had a history of angina and idiopathic interstitial pneumonia but had no overt immune deficiency. Physical examination showed enlarged lymph nodes on the right side of the neck. Computed tomography revealed enlarged cervical lymph nodes and involvement of the mandible and Th1 vertebral body (Supplemental Figure 1). Blood analysis showed increased serum immunoglobulin G (IgG) levels (Supplemental Table 2), and serum immunofixation electrophoresis detected IgG-κ type M-protein (Supplemental Figure 2) which demonstrates the results of serum immunofixation electrophoresis). A fine-needle aspiration biopsy of a cervical lymph node was performed, and the cytological findings suggested plasma cell neoplasm (Figure 1). Excisional lymph node biopsy was also performed, and the chromosome analysis revealed a deletion in chromosome 1 and two marker chromosomes (Supplemental Table 2), while chromosome 8 was not involved. The final pathological diagnosis was PBN, as described below. The tumor was chemotherapy-resistant, and the patient died 4 months after diagnosis. 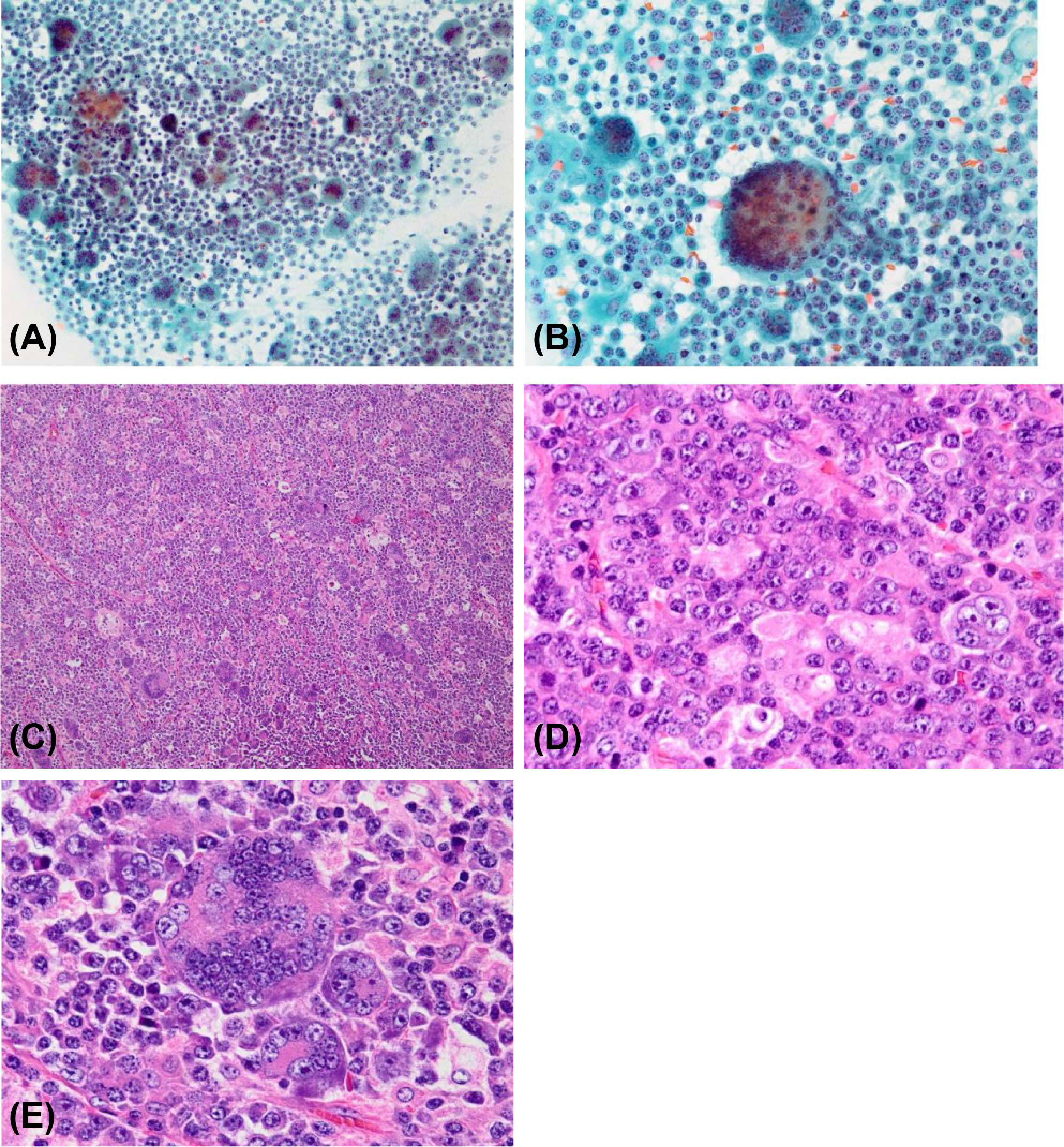 For cytological analysis, the cervical lymph node specimen obtained using fine needle aspiration was sprayed on glass slides, and the excisional biopsy specimen was sliced and placed on glass slides. These glass slides were quickly fixed with ethanol for Papanicolaou staining or air-dried and fixed with methanol for Giemsa staining. For histological analysis, tissues were processed following standard procedures. Formalin-fixed paraffin-embedded blocks were cut into 4-μm-thick sections and stained with hematoxylin and eosin.

The analysis showed diffusely proliferating mononuclear cells admixed with multinucleated giant cells. Because of the marked tumor invasion, the original architecture of the lymph node was almost lost. The mononuclear cells had eccentric round nuclei and a basophilic cytoplasm, exhibiting features of plasmablastic or plasma cells. The nuclei had prominent nucleoli and manifested anisokaryosis and irregular chromatin distribution. The multinucleated giant cells had dozens of nuclei, mimicking osteoclasts (Figure 1).

The results are shown in Table 1. First, we assessed the line of differentiation (Table 1A). Both the mononuclear and multinucleated cells were positive for CD138 (Figure 2A) and revealed light chain restriction of κ>λ (Figure 2B), suggesting monoclonal plasma cell proliferation. Furthermore, both cell types were positive for cyclin D1 (Figure 2C) and EBER-ISH (Figure 2D). However, both cell types were negative for CD68, a marker for histiocytes (Figure 2E). These results suggested that not only the mononuclear cells but also the multinucleated giant cells were neoplastic. The multinucleated giant cells were not considered osteoclasts because they expressed features of plasma cell neoplasms while lacking histiocytic features. The neoplastic cells were positive for EBER-ISH, suggesting PBL, but were also positive for cyclin D1, which suggested PPCM. In addition, they did not express EBNA2, a finding that did not support immune suppression and PBL. Due to this inconsistency, we could not differentiate between PBL and PPCM. 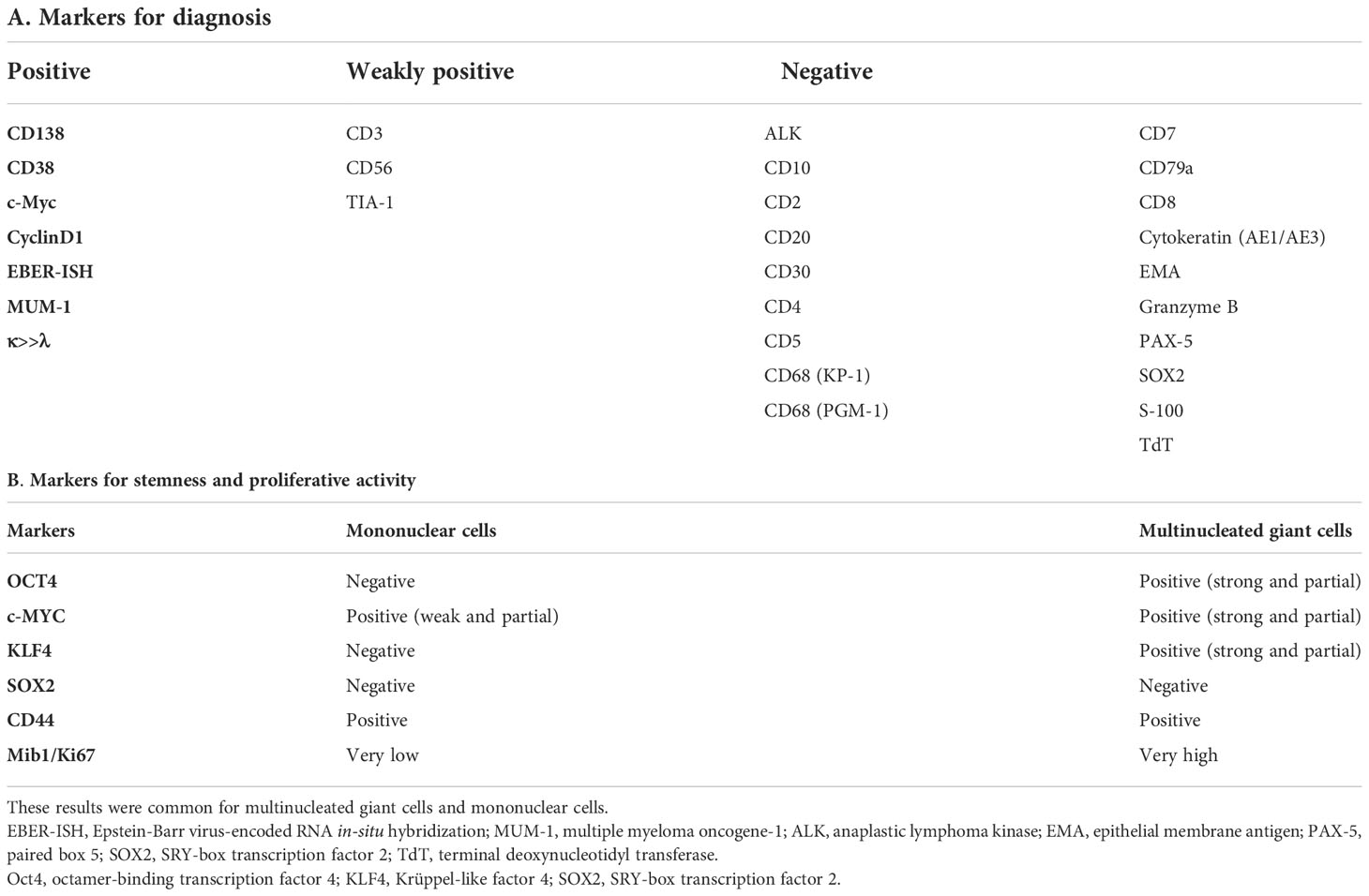 We have summarized these results in Figure 3 and compared them to the results of previous studies (8, 10). This comparison is explained in detail in the discussion. 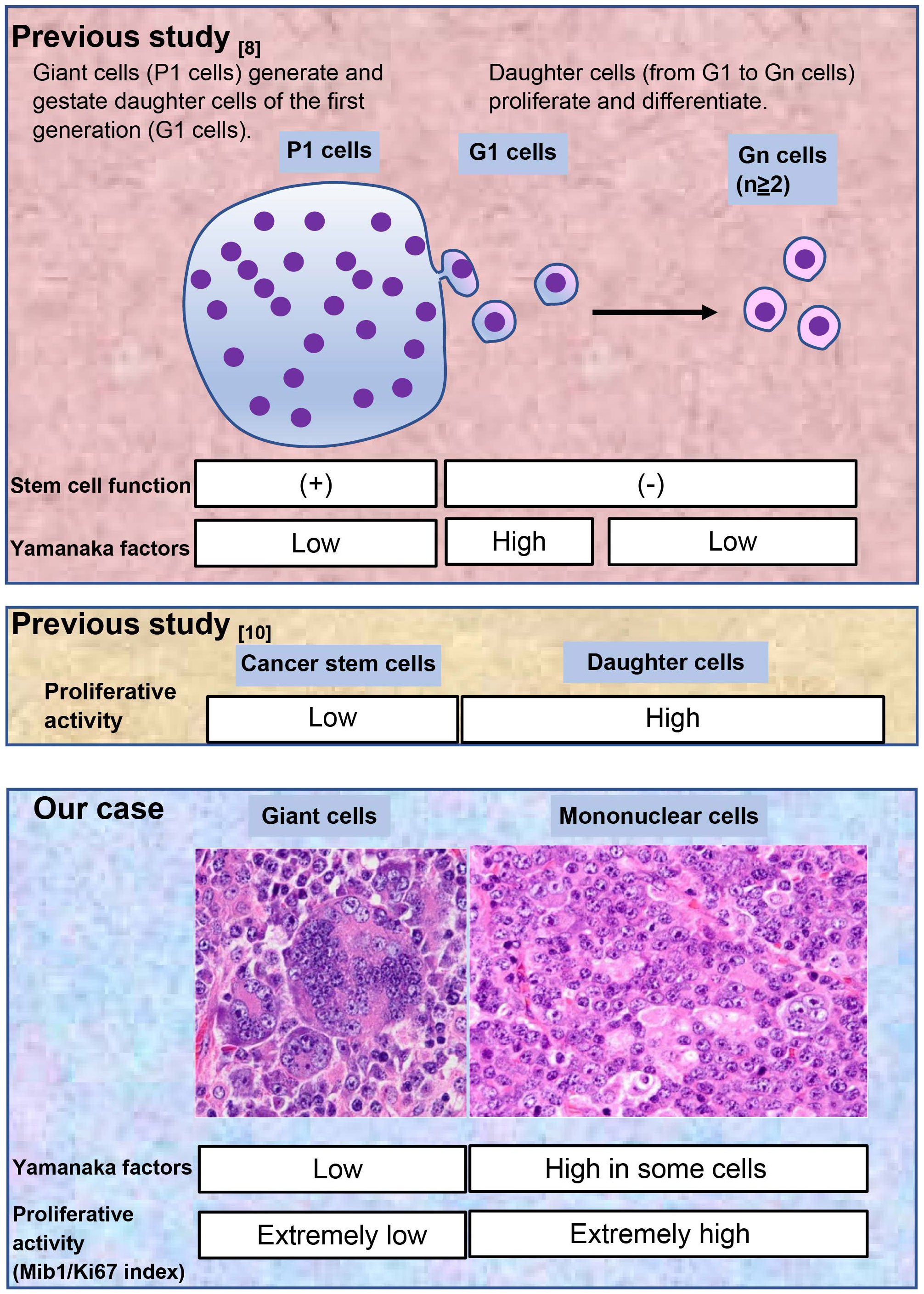 Figure 3 Comparison of our case with previous studies.

Unstained sections (thickness, 4 µm) were “pretreated” using a Histology Fluorescent in situ hybridization (FISH) kit (GSP Laboratory, Kobe, Japan). Next, they were subjected to hybridization with BAC clone-derived probes for CCND1 and IGH, with a CKS1β dual-color probe set (Agilent) or with a c-Myc dual-color probe set (Abbott). The names of BAC clones used will be provided upon request. Hybridized slides were then stained with DAPI (4,6-diamidino-2-phenylindole, dihydrochloride) and examined using a fluorescence microscope BX51 (Olympus, Tokyo, Japan).

Diagnosis, in this case, was challenging owing to the difficulty in differentiating between PBL and PPCM. The EBER-ISH positivity suggested PBL; however, there were no indicators of immune suppression as the patient had no history of HIV infection or organ transplantation, and the tumor cells were negative for EBNA2, an indicator of immune suppression (12). Without immune suppression, a diagnosis of PBL was not strongly suggested. Furthermore, approximately 50% of PBLs harbor a rearrangement of c-Myc on chromosome 8 (13–15), while, in this case, there was no abnormality in chromosome 8. In addition, the expression of cyclin D1 suggested PPCM, but the cytogenetic analyses did not detect translocation or amplification of CCND1. Hence, the final pathological diagnosis was PBN.

First, we evaluated the Yamanaka factors (OCT4, SOX2, KLF4, and c-Myc), which are implicated in cancer cell stemness (16, 17). The tumor consisted of mononuclear and multinucleated giant cells, and we assessed the stemness of both cell lineages. In a previous study on post-chemotherapy ovarian cancer, neoplastic multinucleated giant cells, designated as P1 cells, generated and gestated mononuclear daughter cells, designated as Gn cells (G1 cells were the first generation of Gn cells), and these cells were involved in drug resistance (8). Although P1 cells had stem cell functions, stem cell markers such as CD44 and Yamanaka factors were more strongly expressed in G1 than in P1 cells in that study. This unexpected phenomenon has not yet been fully explained. In concordance with the previous study (8), in our case, the stem cell markers OCT4, c-Myc, and KLF4 were more strongly expressed in the mononuclear than in the multinucleated giant cells. Moreover, SOX2 was negative in both cell types.

In our case, there were several multinucleated giant cells even before chemotherapy, suggesting that the phenomenon of maternal multinucleated giant cells gestating mononuclear cells is not limited to the post-chemotherapy period. Moreover, we used formalin-fixed paraffin-embedded specimens for the analysis, ensuring high accessibility. The same analyses can be conducted on multiple cases at a low cost.

The authors thank Dr. Kengo Takeuchi from the Cancer Institute, Japanese Foundation for Cancer Research, for his insightful suggestions. The authors are also grateful to Ms. Satoko Baba for preparing tests using fluorescent in situ hybridization. We would like to thank Editage (www.editage.com) for English language editing.

The Supplementary Material for this article can be found online at: https://www.frontiersin.org/articles/10.3389/fonc.2022.1023785/full#supplementary-material

Copyright © 2022 Otsuka-Kamakura, Sugiura, Yamazaki, Shimizu and Hiruta. This is an open-access article distributed under the terms of the Creative Commons Attribution License (CC BY). The use, distribution or reproduction in other forums is permitted, provided the original author(s) and the copyright owner(s) are credited and that the original publication in this journal is cited, in accordance with accepted academic practice. No use, distribution or reproduction is permitted which does not comply with these terms.