Background: Epidemiological evidence on the relationship between benign ovarian tumors and ovarian cancer risk has been controversial; therefore, this systematic review and meta-analysis evaluated this association.

Methods: The PubMed and Web of Knowledge databases were searched for eligible studies published up to April 30, 2020. The study-specific risk estimates were pooled using a random-effects model.

Conclusions: Benign ovarian tumors were associated with an increased risk of ovarian cancer. Due to the high heterogeneity among the studies and the risks of bias, more studies are warranted to confirm these findings.

Ovarian cancer is one of the most common gynecologic cancers and also has the highest mortality rate (1, 2). Due to the lack of specific symptoms in the early stage, most ovarian cancers are diagnosed at advanced stages, with a 5-year survival rate of 20–30% (3, 4). Therefore, it is important to identify risk factors and develop systematic prevention and early detection strategies to reduce the risk of ovarian cancer.

Benign ovarian tumors may be precursors and etiological risk factors for ovarian cancer. While numerous epidemiological studies have investigated the association between benign ovarian tumors and ovarian cancer risk, the results have been inconsistent (5–14). Two large cohort studies based on the Danish Cancer Register indicated that benign ovarian tumors may be associated with a long-term increased risk of both mucinous and borderline ovarian cancers (7, 8). A population-based case-control study in a Chinese population reported an odds ratio of 12.00 (95% confidence interval [CI]: 2.50–57.70) for ovarian cancer among women with a prior ovarian cyst (14). However, other studies did not observe a statistically significant association. A pooled analysis of eight case-control studies with 5207 cases and 7705 controls in multiple countries suggested that ovarian cysts may not be associated with the risk of ovarian cancer (9).

Since the relationship between benign ovarian tumors and ovarian cancer risk remains unclear, this systematic review and meta-analysis aimed to assess the association based on the most recent epidemiological evidence.

Because this was a study-level systematic review and meta-analysis of observational studies and did not involve the collection and analysis of any individual-level data, ethical approval was not sought for this study. This systematic review was conducted using the Preferred Reporting Items for Systematic Reviews and Meta-Analyses guidelines (15) (Supplementary Table S1).

A comprehensive literature search of the PubMed and Web of Knowledge databases for publications indexed through April 2020 was performed using the following keywords: ((benign gynecologic conditions) OR (benign ovarian tumors) OR (ovarian cyst) OR (benign cyst)) AND ((ovarian) OR (ovary)) AND ((cancer) OR (neoplasm) OR (carcinoma) OR (tumor)). We also manually searched the reference lists of the relevant publications to identify additional studies. The inclusion criteria for the eligible studies were (1): observational studies (cohort, case-control, or cross-sectional) (2); studies that reported benign ovarian tumors as the exposure of interest and ovarian cancer risk as the outcome of interest; and (3) studies that provided useful risk estimates with 95% CIs, standard errors, or necessary data to calculate them. The exclusion criteria were (1): animal studies, letters, comments, conference abstracts, and grey literature (2); studies that did not report useful data; and (3) studies that were not published in English.

We used a pre-specified reporting form to extract the following data from each publication: first author, year of publication, study location, study design, sample size, exposure and assessment method, outcome and assessment methods, risk estimates with 95% CIs, and covariates included for adjustment in multivariable models. If multiple estimates were provided, priority was given to the multivariable-adjusted risk estimates, which were adjusted for the most potential confounding factors.

Two authors independently evaluated study quality using a nine-point system based on the Newcastle-Ottawa quality assessment scale (16). The cohort studies were assessed based on population selection, group comparability, and outcome assessment. Case-control studies were assessed based on the selection of cases and controls, comparability of cases and controls, and exposure ascertainment.

We used relative risk (RR) as a measure of the association between benign ovarian tumors and ovarian cancer risk. The risk estimates were summarized using a random-effects model when significant heterogeneity was observed (17). Heterogeneity among studies was assessed using the I2 statistic, with I2 >50% indicating a heterogeneous result (18). We conducted subgroup analyses stratified by study design, geographic location, exposure assessment method, histological subtype, and invasiveness. We also performed a sensitivity analysis of the influence of individual studies on the summary estimate by repeating the meta-analysis after excluding one study at a time.

Publication bias was assessed by funnel plot and Begg’s and Egger’s tests (19, 20). When significant publication bias was detected, the trim-and-fill method was used to adjust for bias (21). The statistical analyses were conducted using Stata version 14.0 (StataCorp LP, College Station, Texas).

Our systematic literature search yielded 3799 records, the flow diagram of which is presented in Figure 1. After removing duplicates and screening the titles and abstracts, 28 articles were assessed for eligibility by full-text review. After a full-text review, ten studies (5–14) were finally included in this meta-analysis (Table 1). 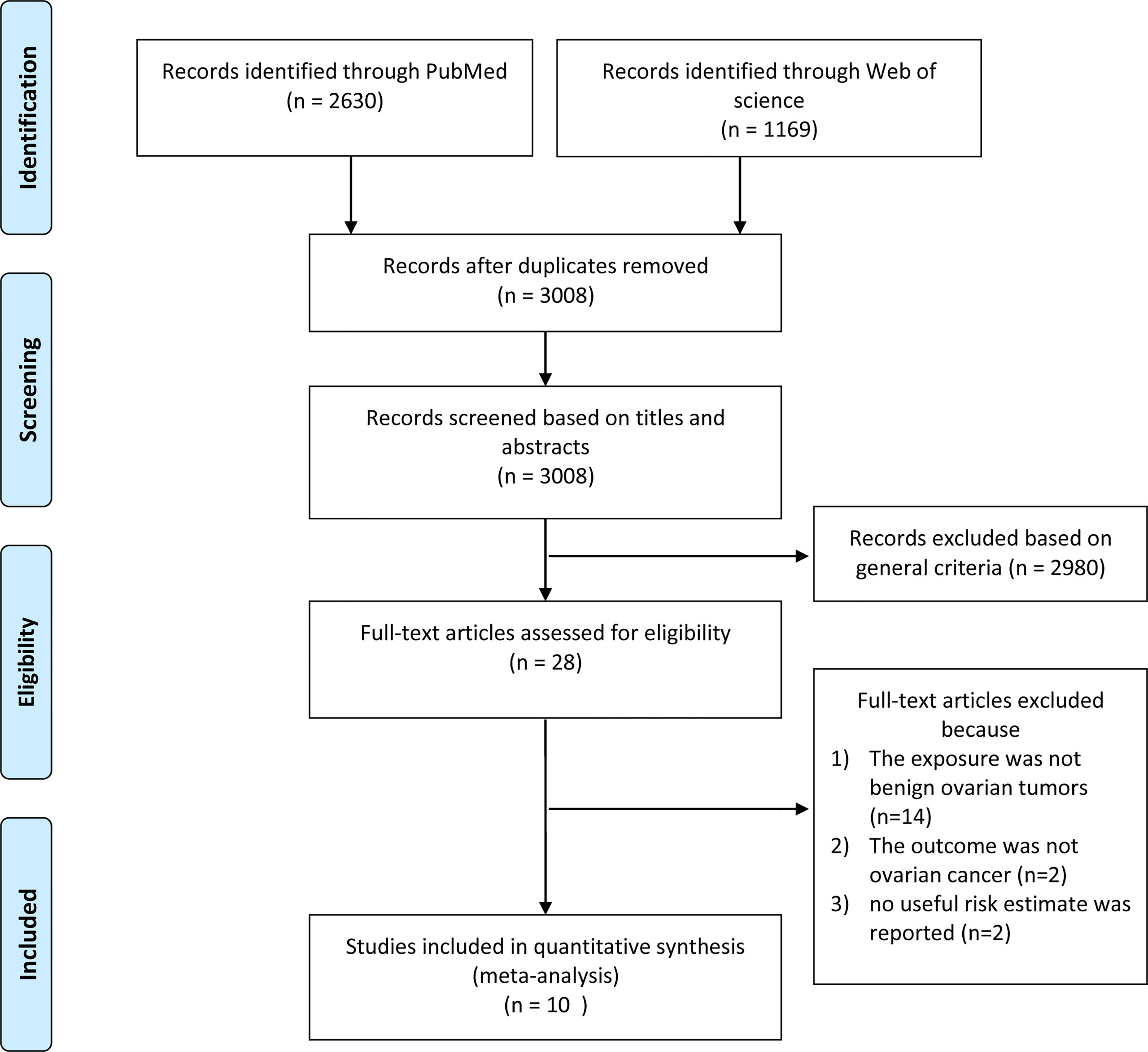 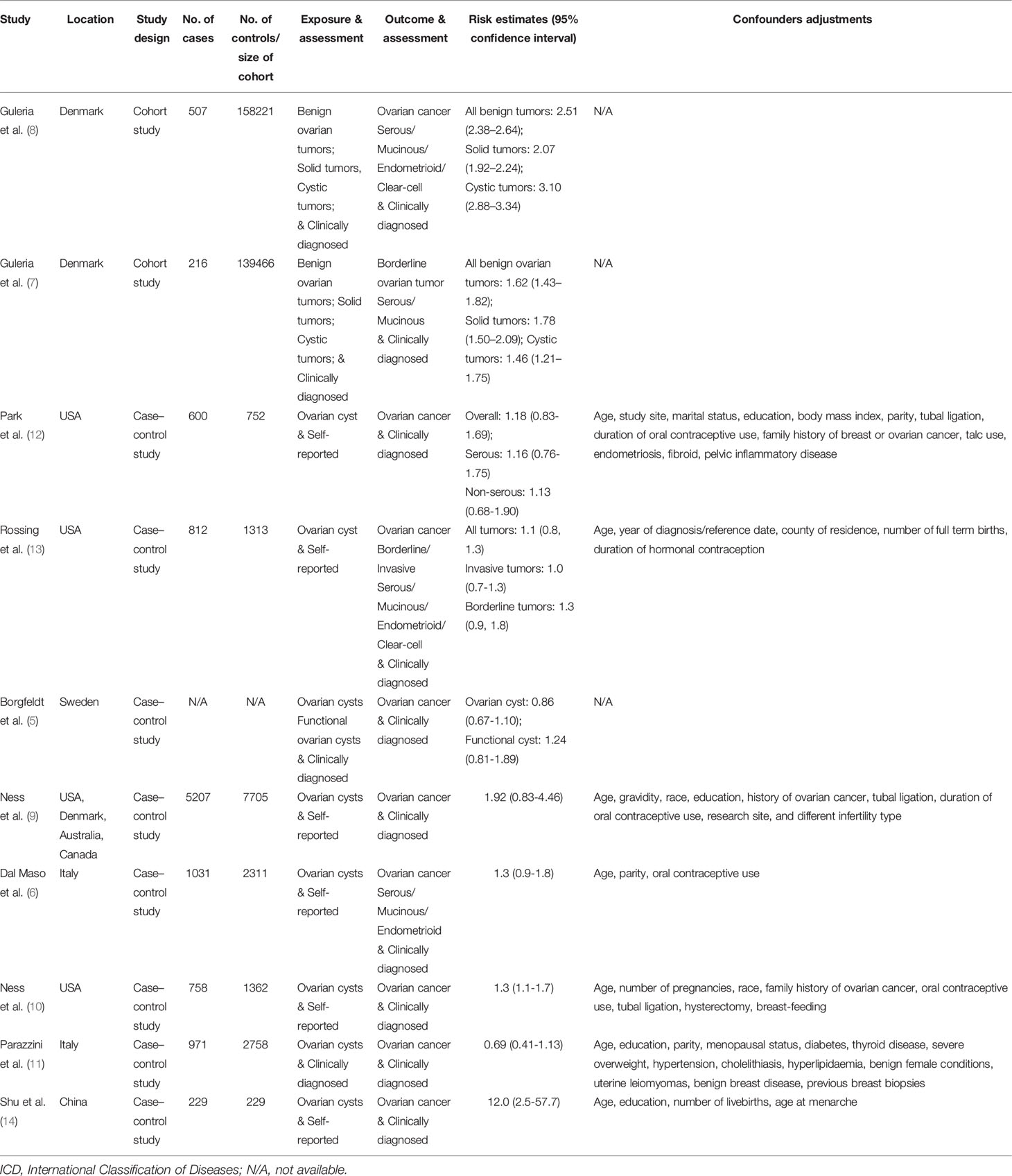 Table 1 Characteristics of studies included in the meta-analysis. 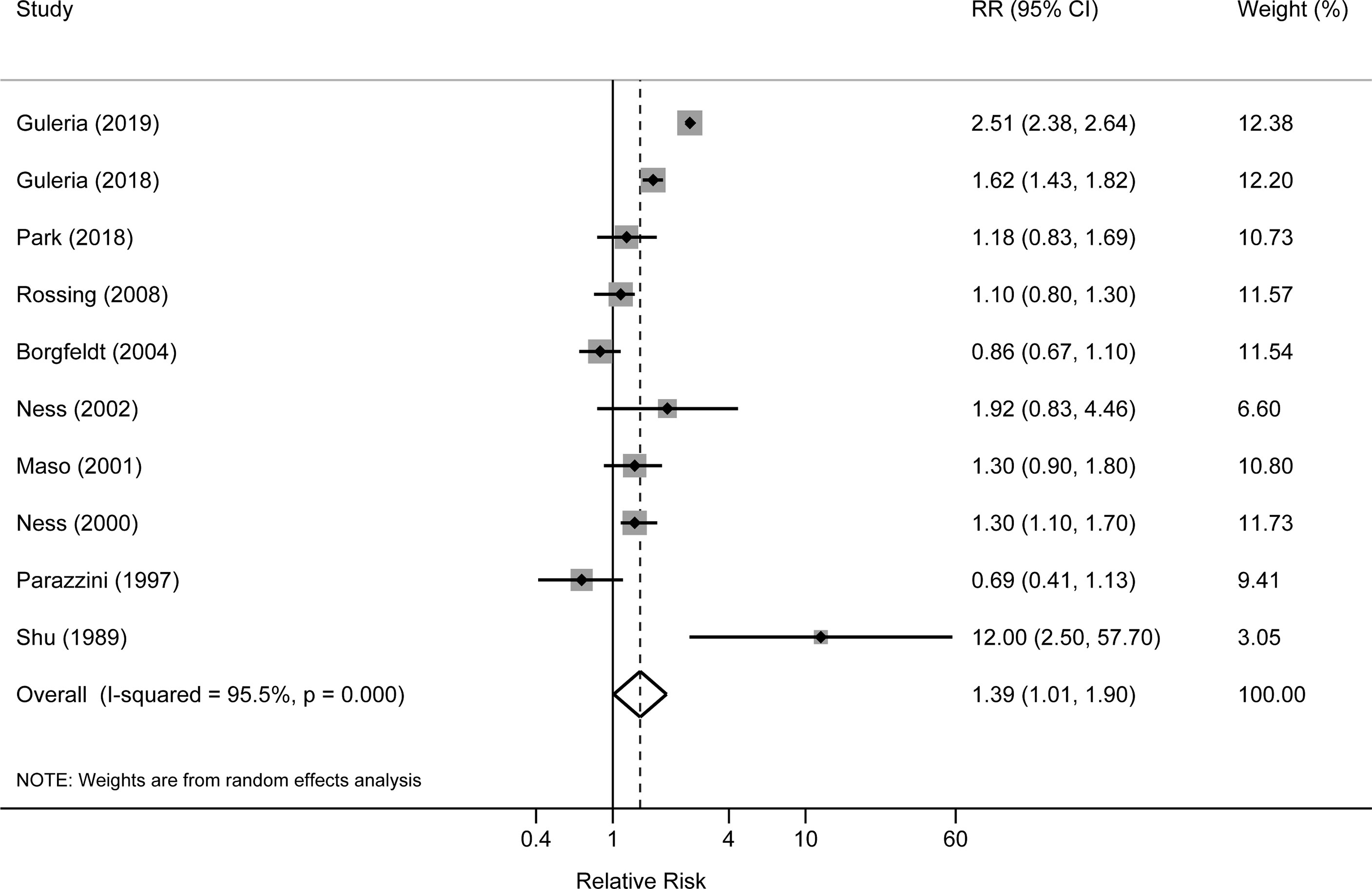 Figure 2 Forest plot for the association between benign ovarian tumors and risk of ovarian cancer.

This is the first systematic review and meta-analysis to summarize the epidemiological evidence of the association between benign ovarian tumors and the risk of ovarian cancer. In this study, a 39% increased risk of ovarian cancer was associated with a history of benign ovarian tumors. The direction of the association was consistent in most subgroups and the results were robust in the sensitivity analysis.

The biological mechanisms by which benign ovarian tumors may transform into malignant tumors are unknown; however, the area at which the epithelium transitions from the ovarian to tubal may be highly susceptible to neoplastic changes (22). The results of animal studies have indicated that the ovarian surface epithelium is the precursor tissue for ovarian neoplasms, which are more susceptible to malignant transformation upon exposure to certain stimulants (23). Furthermore, genetic risk factors such as KRAS and p53 mutations may play important roles in the transition from benign ovarian tumors to ovarian cancer (24, 25).

Our study has several strengths. First, to our knowledge, this is the first systematic review meta-analysis to comprehensively summarize the association between benign ovarian tumors and ovarian cancer risk. Second, our study had a large sample size of 10,331 ovarian patients, which provided sufficient statistical power to detect even a modest association. Third, the histological types of ovarian cancer were considered when evaluating the association between benign ovarian tumors and ovarian cancer. Finally, our study has important clinical implications by suggesting that benign ovarian tumors might be precursors to mucinous ovarian cancer and providing a theoretical basis for clinical decision-making and ovarian cancer prevention and treatment. However, this study has some limitations. First, most of the included studies had case-control designs, which increases the risk for selection and recall biases (33), especially for patients whose exposure status was collected based on self-reports. Nevertheless, the results were similar between the self-reported and clinical diagnosis/ascertainment subgroups in the subgroup analysis stratified by exposure assessment methods. Second, residual confounding may distort the association between benign ovarian tumors and ovarian cancer; we were unable to address these problems due to confounding inherent in the original studies. Third, detection bias was possible as women with benign ovarian tumors tend to undergo more regular and extensive physical examinations; thus, they are more likely to have an early diagnosis of ovarian cancer. Of note, a Danish cohort study, after excluding the first year of follow-up from the analyses (when the likelihood of detection bias was highest), reported that the increased risk for ovarian tumors persisted for up to 9 years compared to that of the general female population (7). Fourth, high heterogeneity was detected across the included studies. The heterogeneity may come from various sources, such as study design, study population, and exposure assessment methods. Subgroup analysis and meta-regression to explore the potential sources of heterogeneity showed a tendency for slight attenuation of the heterogeneity in several subgroup analyses. Finally, the possibility of publication bias cannot be excluded. Although the overall results did not change materially after adjusting for the trim-and-fill method, the summary risk estimates should be interpreted with caution.

JG and XG were involved in the conceptualization of the study. JG collected the data. HF and XG conducted the analysis. XG contributed to writing. All authors contributed to the article and approved the submitted version

The Supplementary Material for this article can be found online at: https://www.frontiersin.org/articles/10.3389/fonc.2022.895618/full#supplementary-material

Copyright © 2022 Guo, Feng and Gu. This is an open-access article distributed under the terms of the Creative Commons Attribution License (CC BY). The use, distribution or reproduction in other forums is permitted, provided the original author(s) and the copyright owner(s) are credited and that the original publication in this journal is cited, in accordance with accepted academic practice. No use, distribution or reproduction is permitted which does not comply with these terms.