Mature plasmacytoid dendritic cell proliferations (MPDCPs) are clonal, non-malignant pDC proliferations that have been reported to occur in association with myeloid neoplasms such as CMML, AML (pDC-AML), and, rarely, MDS or MPNs. Here we report the first case of a MPDCP associated with T-lymphoblastic leukemia (T-ALL), a lymphoid neoplasm. The MPDCP in this case involved ~50% of the bone marrow, was found in nodular aggregates, expressed CD123, CD4, and CD303, and lacked CD56 and TCL1 expression. In addition, the MPDCP lacked CD34 and TdT but showed aberrant expression of CD7, CD5, CD10, and CD13, markers expressed by the abnormal T-lymphoblastic cells. Mutational analysis demonstrated mutations in JAK3, NOTCH1, NRAS, KRAS, DNMT3A, and SH2B3 but no mutations in TET2, ASLX1 or ZRSR2. Analysis of the pDC frequency in a separate cohort of T-ALL and control patients demonstrated that bone marrow pDCs are often decreased in patients with T-ALL compared to controls. This is the first report of a MPDCP associated with a lymphoid neoplasm and provides further support that MPDCP can arise from a multipotent hematopoietic progenitor with lymphoid and dendritic cell potential.

Mature plasmacytoid dendritic cell proliferations (MPDCPs) are morphologically mature pDC proliferations with a non-malignant clinical course characterized by expression of pDC markers (CD123, CD303, TCF4, etc.), low Ki67 proliferation index (<10%), and decreased to negative expression of CD56 (4). These proliferations may show aberrant loss of pDC markers or expression of CD34 and terminal deoxynucleotidyl transferase (TdT) (5, 6). MPDCPs are rare and have only been associated with myeloid neoplasms, suggesting that they arise from a clonally related myeloid-progenitor. The most common myeloid neoplasms associated with MPDCPs are acute myeloid leukemia (pDC-AML), particularly AML with RUNX1 mutations, chronic myelomonocytic leukemia (CMML), and, rarely, myelodysplastic syndrome (MDS) or myeloproliferative neoplasms (MPNs) (5–9). Here, we describe the first report of a lymphoid neoplasm, T-lymphoblastic leukemia (T-ALL), occurring with a MPDCP that shows immunophenotypic similarities to the associated lymphoid neoplasm. We further interrogate the frequency of pDCs in the bone marrow of an additional cohort of patients with T-ALL compared with normal patients.

A 51-year-old woman with a history of fibromuscular dysplasia and non–ST-elevation myocardial infarction presented with pancytopenia on complete blood count (white blood cell: 1.8 × 109/L; hemoglobin: 10.8 g/dL; platelets: 160 × 109/L; absolute neutrophil count: 0.7 × 109/L; absolute lymphocyte count: 0.9 × 109/L). Peripheral blood smear demonstrated atypical lymphoid cells concerning for blasts. A subsequent bone marrow aspiration and biopsy demonstrated decreased trilineage hematopoiesis with no morphological evidence of dysplasia to suggest MDS; however, an increase in blasts and atypical plasmacytoid cells were present in a background of other hematopoietic cells (Figure 1A). The atypical plasmacytoid cells were small to medium in size with irregular round-to-oval nuclei showing occasional eccentricity, mature chromatin, and basophilic cytoplasm. On the basis of a 200-cell manual differential of the bone marrow aspirate, the frequency of the different cell types was as follows: blasts, 24%; myelocytes, 1%; metamyelocytes, 0.5%; band neutrophils, 1%; erythroids, 14.5%; lymphocytes, 10.5%; plasma cells, 2%; monocytes, 1%; mast cells, 0.5%; atypical plasmacytoid cells, 45%. By flow cytometry, the blasts were abnormal T lymphoblasts and expressed cytoplasmic CD3, TdT, CD34, CD1a(subset), CD10(partial), CD5, CD7(bright), CD13(partial), CD33(partial), CD123(dim partial), and CD45(dim) and lacked expression of other lymphoid and myeloid markers including cytoplasmic MPO (Figure 1B, red, and Supplemental Figure 1). By flow cytometry, the atypical plasmacytoid cells were consistent with pDCs and expressed CD123(bright), CD4, HLA-DR(bright), CD33(moderate), CD7(moderate), CD5(moderate), CD2(dim), CD10(partial), CD1a(subset), CD22(dim), and CD45(moderate) and lacked CD34, TdT, CD56, cCD3, cMPO, monocytic markers, and other T-cell/B-cell markers (Figure 1B, blue, and Supplemental Figure 2). To visualize the distribution of T lymphoblasts and pDCs within the bone marrow, immunohistochemistry on serial sections of the core biopsy was performed. T lymphoblasts were seen as clusters of either CD3, TdT (dark brown nuclear staining), LM02, or Ki67-positive cells throughout the bone marrow (Figure 1C, upper panel). No clustering of MPO or lysozyme was identified. The mature pDCs constituted approximately 50% of the total bone marrow cellularity and were distributed predominantly as nodules/aggregates. The pDCs expressed CD4, CD123, CD303, and low Ki67 (<5%) and lacked TdT, CD56, and TCL-1 by immunohistochemistry (Figure 1C, lower panel). Of note, TdT showed low-level background staining in non-blasts, which was similar to that seen in medullary thymocytes which are known to be TdT-negative (Supplemental Figure 3). Overall, the morphologic and immunophenotypic features were concerning for T-ALL with an associated MPDCP.

Positron emission tomography–computed tomography demonstrated hypermetabolic lymphadenopathy above and below the diaphragm. The patient was subsequently induced with cyclophosphamide, vincristine, doxorubicin, and dexamethasone.

To determine whether increased pDCs are associated with T-ALL within the bone marrow, as has been recently demonstrated in a subset of AML cases, currently referred to as pDC-AML (5, 6), we identified patients with T-ALL and normal controls from our pathology database between January 2020 and December 2021 and assessed the frequency of bone marrow pDCs at diagnosis by flow cytometry—identified by their characteristic immunophenotype of CD45(moderate), CD123(bright), and HLA-DR(bright) surface expression. In addition, clinical, pathologic, and molecular data were collected. Statistical analysis was performed using GraphPad Prism. This study was approved by the institutional review board of Stanford University School of Medicine.

The median proportion of pDCs in normal bone marrow controls (n = 30) was 0.26% [interquartile range (IQR), 0.13%–0.46%], whereas, in patients with T-ALL (n = 10, not including the current patient), the median proportion of pDC was depleted at 0.086% (IQR, 0.05–0.14%) (Figure 2). Although additional cases of T-ALL with increased pDCs were not found, this cohort was small and thus further studies are required to determine if increased pDCs are a common finding in a subset of T-ALL, and if so, if there are unique clinicopathological features among these T-ALL cases. 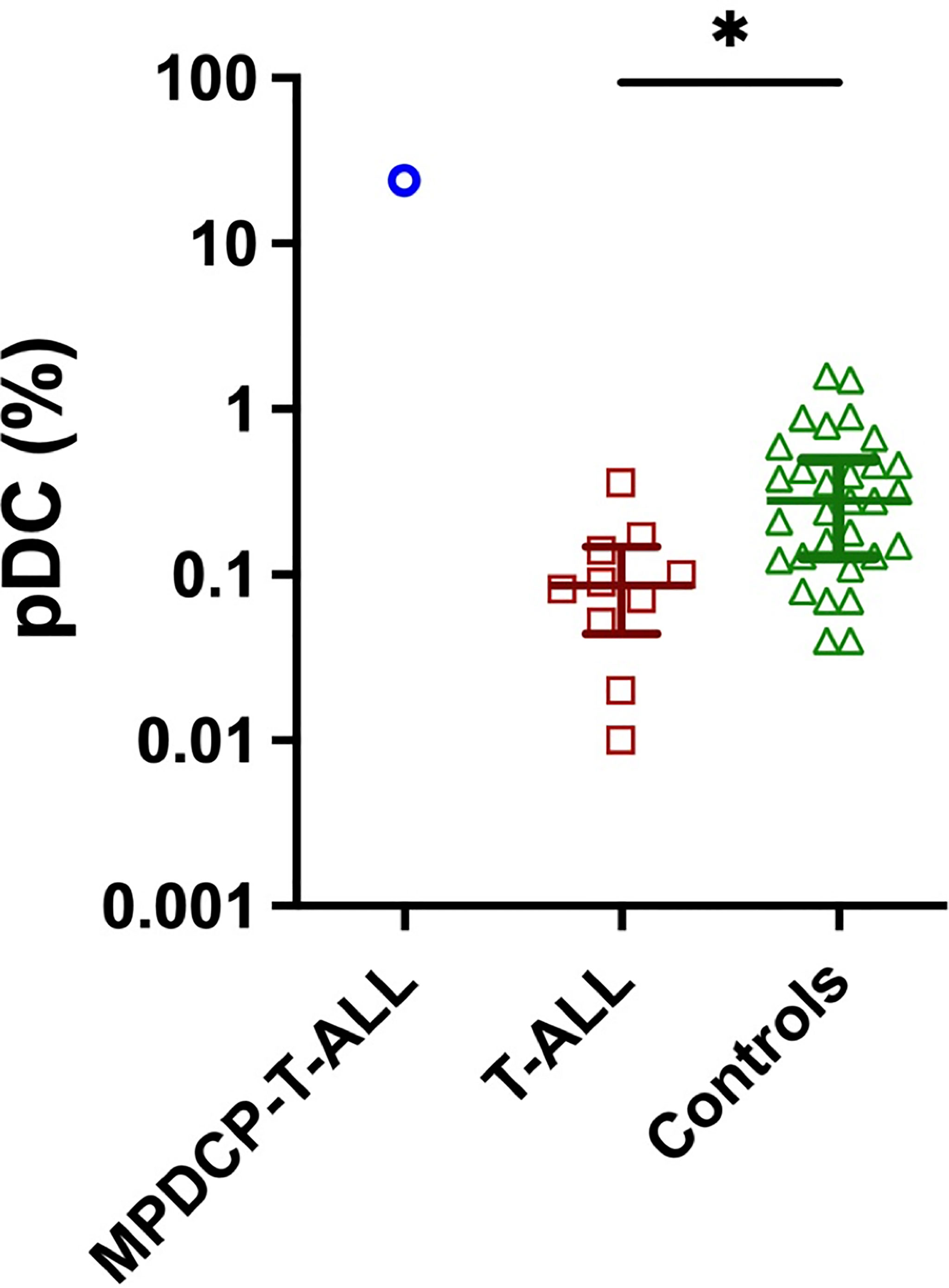 Figure 2 Decreased pDC are frequent in patients with T-ALL. pDC frequency (percentage of white blood cells) in bone marrow aspirates from our index case of MPDCP-T-ALL, and from patients with T-ALL (n = 10) and controls (n = 30). Presents are median ± interquartile range. *p < 0.05 based on unpaired t-test.

The understanding of dendritic cell ontology, in particular pDC ontology, has recently been challenged with single-cell RNA sequencing (scRNAseq) studies. Prior to scRNAseq, there was evidence suggesting that pDCs derived from myeloid-derived precursors that additionally gave rise to conventional DCs (cDCs). However, recent studies have demonstrated that pDCs may additionally arise from Ly6D+ lymphoid progenitors which are distinct from the myeloid DC lineage (10, 11). These studies open the possibility of a shared precursor for both the pDC and T-lymphoblastic populations in our case. In addition, it prompts investigation of the clonal origin of rare cases of BPDCN occurring concurrently with T-ALL or peripheral T-cell lymphoma, in addition to BPDCNs aberrantly expressing cytoplasmic CD3 (12–15).

Although recent studies have provided evidence of a common shared precursor for pDCs and lymphocytes, the pathogenic mutations that may participate in shared clonal proliferations of pDCs and T-lymphocytes is unclear. In the present case, we identified pathogenic loss-of-function mutations in DNMT3A and SH2B3 at variant allele frequencies (VAFs) greater than those for JAK3 and NOTCH1, suggesting that DNMT3A and SH2B3 mutations may be initial, founding mutations in a shared hematopoietic precursor that can give rise to sub-clonal populations of pDCs and T lymphoblasts. Indeed, identical DNMT3A mutations with the same VAF have been identified in sorted blasts and pDCs of pDC-AML (5, 6), suggesting that dysregulation of epigenetic modifiers may be an early molecular event in the progression of clonal pDC proliferations associated with a subset of hematological neoplasms.

In summary, we present the first case of a MPDCP associated with T-ALL, a lymphoid neoplasm. We propose that the MPDCP seen in this case should be considered a “pDC proliferation associated with a hematological neoplasm” given the extensive proliferation of pDCs in nodular aggregates, lack of CD56 and TCL1, and the co-expression of lymphoid antigen also expressed by the abnormal T-lymphoblastic cells. A limitation of this case report is that sorting of pDCs and T lymphoblasts was not performed to determine which mutations are mutually expressed by both pDCs and T lymphoblasts; however, the aberrant cross-lineage antigen expression (CD5, CD7, CD10, CD1a, and CD13) on both blasts and pDCs supports the idea of a shared clonal origin between these populations. However, we cannot exclude the possibility that the MPDCP in this case developed from a clonally distinct hematopoietic precursor independent of the T-ALL. Future prospective studies should aid to definitely establish mutational clonality between MPDCPs and lymphoid neoplasms, as has recently been done in myeloid neoplasms (7). In addition, the clinical significance of an associated MPDCP in lymphoid neoplasms is currently unknown; however, our patient was noted to have persistent disease after 30 days of induction chemotherapy.

This study was reviewed and approved by the Stanford IRB, Protocol 63202. Informed consent was obtained from the individual for the publication of any potentially identifiable images or data included in this article.

FF and OS designed the study, analyzed the data, and wrote the manuscript. ML provided clinical insight and edited the manuscript. All authors contributed to the article and approved the submitted version.

The Supplementary Material for this article can be found online at: https://www.frontiersin.org/articles/10.3389/fonc.2022.903113/full#supplementary-material

Supplementary Figure 1 | Flow cytometry gating strategy to identify and characterize T lymphoblasts. Blasts were initially identified based on CD34 versus CD38 plots as CD34-positive and CD38-dim events, which were found to express CD45-dim and have low side scatter (A–D), first and second columns). In a T-cell specific flow cytometry tube, blasts were identified based on CD7, CD4 and CD45 as CD7-bright, CD4-negative and CD45-dim events based on flow cytometry findings from A-D €. Finally, in a flow cytometry tube assessing cytoplasmic MPO, CD79a, CD22, CD3 and TdT, blasts were identified based on CD45 versus CD34, as CD34-positive and CD45-dim (F). Each row represents a distinct flow cytometry tube run. The first column in each row is the two-by-two plot used to identify the blast population, and the remaining plots are gated on that given blast population (A–D, F) except in the T-cell specific tube which additionally used the CD45 vs SSC plot (E, second column) to exclude CD45-bright events to identify blasts. Starred plots served as the presented blast population in Figure 1B (red population).

Copyright © 2022 Fei, Liedtke and Silva. This is an open-access article distributed under the terms of the Creative Commons Attribution License (CC BY). The use, distribution or reproduction in other forums is permitted, provided the original author(s) and the copyright owner(s) are credited and that the original publication in this journal is cited, in accordance with accepted academic practice. No use, distribution or reproduction is permitted which does not comply with these terms.