Clinically rare, multiple primary tumors are a growth or development of two or more neoplasms in the same individual. A 57-year-old woman with two primary cancers, namely, breast and gastric cancers, and a gastrointestinal stromal tumor was admitted. Next-generation sequencing (NGS) of the three tumors and blood was performed to determine their clonal origin and identify genetic cancer susceptibility. NGS identified that germline genetic variants potentially correlated with an individual risk of developing multiple cancers and that additional mutations are required to drive the formation of different tumors.

A 57-year-old woman with abdominal pain for a month was admitted to our hospital on March 18, 2021. A mass was found in the greater curvature using gastric endoscopy, and adenocarcinoma was identified via pathological examination. In addition, a nodule was found in the right mammary gland, pathologically confirming an infiltrating ductal carcinoma. A F18-fluorodeoxyglucose positron emission tomography-computed tomography scan was conducted (Figure 1). Laparoscopic total gastrectomy (Roux-en-Y) was performed on March 25, 2021. After incision of the specimen, two tumors were found in the stomach body, one in the cavity and one outside the wall (Supplementary Figure 1). After more than a month of recovery, right breast cancer-modified radical mastectomy was performed on May 6, 2021, and five sentinel lymph nodes were diagnosed as negative upon intraoperative frozen sections. Pathological findings showed that the patient had primary breast and gastric cancers with gastrointestinal stromal tumor (GIST) (Supplementary Table 1). 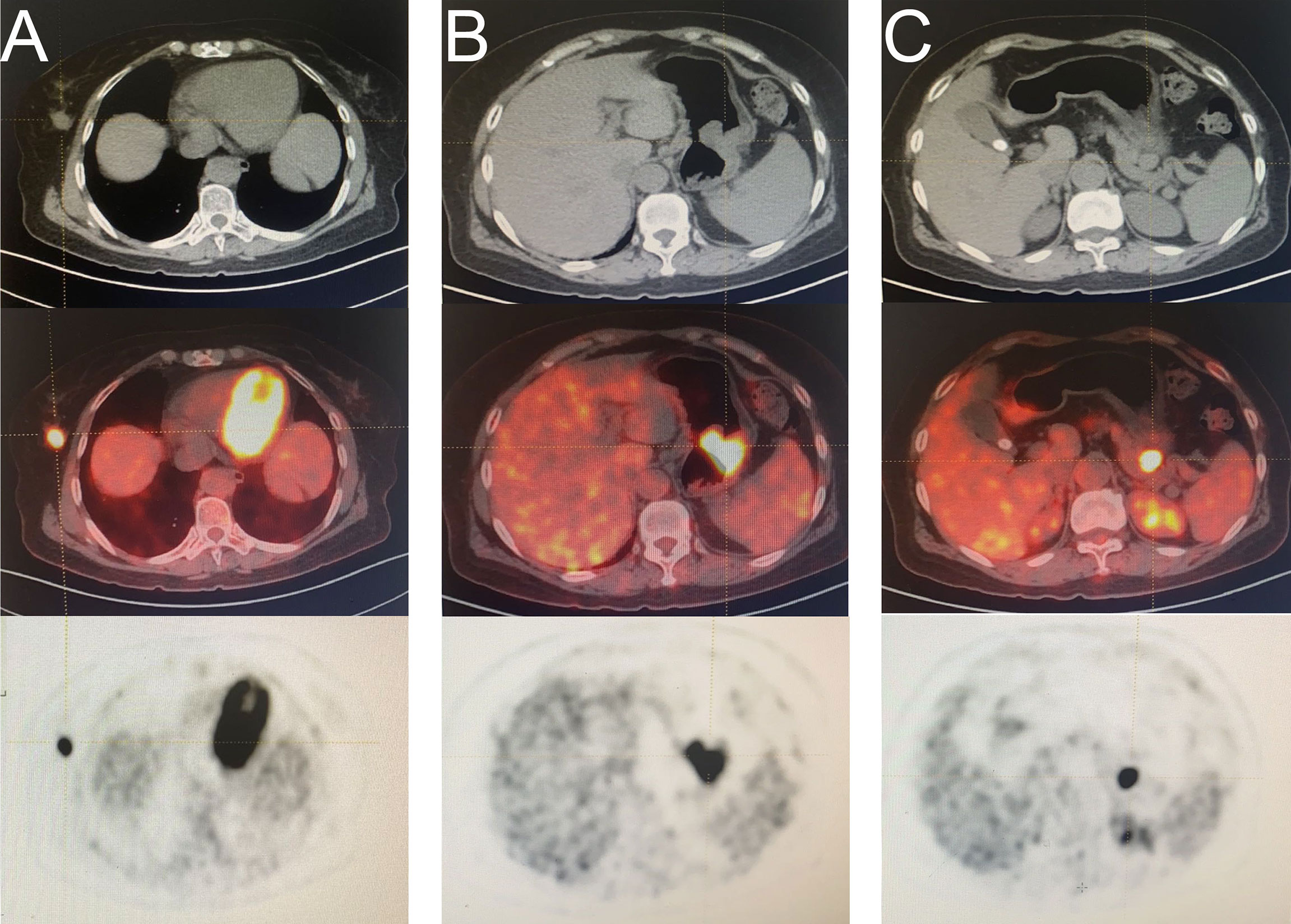 NGS of DNA obtained from peripheral blood and three tumors was performed to identify possible germline mutations and acquired somatic mutations. Details of the NGS and data analysis methods are provided in the supplementary material. Seven possible pathogenic germline mutations were detected in the blood, namely, ERCC6, SLCO1B1, ALDH2, BRCA2, CNGA1, PRSS12, and PEX1 (Supplementary Table 2). In addition, 104, 42, and 166 somatic mutations were detected in breast cancer, gastric cancer, and GIST, respectively (Supplementary Tables 3A–C). Interestingly, three gene mutations, namely, RIMS3, LOC283710, and ABCC6, were present in all three tumors (Table 1). GIST and gastric cancer carried KIT (COSM1169) and TP53 (COSM10731) hotspot mutations, respectively, which were reported in the Catalogue of Somatic Mutations in Cancer (COSMIC) database (http://cancer.sanger.ac.uk/cosmic). However, breast cancer did not show any COSMIC mutations associated with carcinogenesis (Table 2). Although BRCA2 germline mutation (p.Y1894*) was detected in blood and all three tumors, a new BRCA2 somatic mutation (p.S744X) was detected in gastric cancer. Loss of heterozygosity (LOH) event was identified in the pathogenic BRCA2 germline mutation in the breast cancer sample alone, indicating the driving role of this mutation in breast cancer. Although the LOH of BRCA2 was absent in the gastric cancer sample, somatic mutation of BRCA2 may contribute as a second-hit event of BRCA2.

Table 1 Summary of the similar somatic mutations existing in each tumor analyzed by NGS.

Table 2 Summary of their specific driven mutations existing in each tumor analyzed by NGS.

With the advancement of early-stage cancer detection, the incidence of MPTs is increasing. Factors contributing to MPTs include congenital factors, such as genetic susceptibility, familial cancer syndromes, and immune deficiency; acquired factors, such as environment, lifestyle exposures, and infection; and interaction among all these factors (2, 3). Here, we described the first case of a patient with synchronous development of breast cancer, gastric cancer, and GIST.

NGS of blood and three tumors was performed to determine a clonal relationship between three tumors. NGS of the blood showed that the patient carried seven frequent pathogenic germline mutations, namely, ERCC6, SLCO1B1, ALDH2, BRCA2, CNGA1, PRSS12, and PEX1. Of these, BRCA2 stop gain mutation p.Y1894* was the only possible pathogenic variant in this case. ERCC6, a gene involved in preferential repair, is generally closely related to Cockayne’s syndrome (4). However, recent reports show that ERCC6 leads to increased predisposition to breast and gastric cancers (4–6). ALDH2 rs671 G>A polymorphism reportedly increases gastric cancer susceptibility in alcohol consumers (7–9), but the patient in this case study had no history of alcohol abuse. Mutations in the remaining four genes, namely, SLCO1B1, CNGA1, PRSS12, and PEX1, have associations with autosomal diseases, such as autosomal recessive retinitis pigmentosa and non-syndromic intellectual disability (10, 11). Hence, they are not associated with tumors. The tumor-susceptibility gene BRCA2 with high penetrance is primarily concerned with the homologous recombination mechanism of DNA repair, and its variants are the leading causes of familial and early-onset breast cancer (12). Recently, an association between BRCA2 and gastric cancer has been reported (13). However, reports on the relationship between BRCA2 mutation and GIST are scarce.

Although tumor development in multiple locations attributing to a common gene mutation has been proposed, it is not proven yet. A study reported that the association among tumors is due to specific driver mutations in different tumors or a coincidence (14). In the present study, we explore whether additional somatic mutations exist to drive the formation of various tumors. NGS analysis of the three tumors showed that three genes, namely, RIMS3, LOC283710, and ABCC6, with the same somatic mutation, were present in each tumor of the same individual. Previous studies showed no relationship between the three genes and the three tumors, suggesting that these mutations may be random. Furthermore, TP53 and KIT driver mutations were found in gastric cancer and GIST, respectively, suggesting that gastric cancer and GIST possibly emerge from somatic mutations of TP53 and KIT, respectively. However, the pathogenesis of BRCA2 p.Y1894* germline mutation should not be neglected. Considering the LOH event of BRCA2 in breast cancer and BRCA2 p.S744X somatic mutation in gastric cancer, BRCA2 p.Y1894* mutation is prone to a second-hit event of BRCA2 in them. Two copies of BRCA2 get inactivated subsequently, forming a driving factor for the inactivation of the tumor-suppressor gene and promoting neoplasia. It is speculated that TP53 may not be the only driving mutation in gastric cancer, and the second-hit event caused by BRCA2 mutation may be involved, confirming the relationship between BRCA2 and gastric cancer. Therefore, the BRCA2 pathogenic variant led to the systemic predisposition to malignancy in the present study, which is crucial for precision therapy and prevention of the patient and her family members.

Mutations in RIMS3, LOC283710, and ABCC6 genes do not cause tumor formation, suggesting that they might be passenger mutations. The current observation is that a typical tumor contains two to eight driver gene mutations, with a major effect on tumor development; the remaining are passenger mutations with no selective growth advantage (15). Nevertheless, a recent study demonstrate that a third group of medium-impact putative passengers exist in addition to the dichotomy of high- and low-impact variants, possibly exerting a weak driving force on tumorigenesis. With tumor development, the cumulative effect of these genes will be prominent even in the later stage of tumor, exceeding the influence of driving mutation to play a dominant role (15). However, further studies are required to elucidate whether RIMS3, LOC283710, and ABCC6 genes are medium-impact putative passengers involved in the molecular pathways of carcinogenesis, leading to gastric cancer, breast cancer, or GIST.

The present study reported the case of a patient with MPT and performed NGS to identify the genetic variants leading to cancer susceptibility and specific carcinogenesis. NGS showed the crucial effect of BRCA2 p.Y1894* mutation on tumorigenesis. This indicates that if the patient exhibits tumor recurrence and metastasis in future follow-up, targeted BRCA2 therapy may be used. This confirms the benefit of NGS in defining the clonal feature and discovering novel potential molecular targets for subsequent treatment.

The original contributions presented in the study are included in the article/Supplementary Materials. Further inquiries can be directed to the corresponding authors.

The studies involving human participants were reviewed and approved by Ethics Committee of Shanghai Tenth People’s Hospital. The patients/participants provided their written informed consent to participate in this study. Written informed consent was obtained from the individual(s) for the publication of any potentially identifiable images or data included in this article.

TW: writing manuscript and collect samples. JW: manuscript review and communication with patient. KX and MY: manuscript review, resident in charge of the patient during treatment. LF: provided pathology report. CC: supervised the writing of the paper and patient treatment. LY: provide financial support to NGS. All authors contributed to the article and approved the submitted version.

The authors would like to thank Smartquerier Gene Technology (Shanghai) Co. for providing the technical support and data analysis. The authors would also like to acknowledge the patient’s family, who helped make this report possible.

The Supplementary Material for this article can be found online at: https://www.frontiersin.org/articles/10.3389/fonc.2022.910264/full#supplementary-material

Copyright © 2022 Wu, Wan, Xia, Yang, Feng, Yin and Chen. This is an open-access article distributed under the terms of the Creative Commons Attribution License (CC BY). The use, distribution or reproduction in other forums is permitted, provided the original author(s) and the copyright owner(s) are credited and that the original publication in this journal is cited, in accordance with accepted academic practice. No use, distribution or reproduction is permitted which does not comply with these terms.