Stephen A. Maisto3 and

Serotonergic functioning involves SLC6A4, a gene in the regulatory pathway for serotonin (5-HT), which encodes the 5-HT transporter (5-HTT) protein. The SLC6A4 gene has a functional polymorphism in its regulatory region, known as the 5-HTT linked promoter region (5-HTTLPR), which has two allele variants: a 44-bp insertion [long (L) allele] or deletion [short (S) allele]. The S-allele is associated with a 2- to 2.5-fold decrease in 5-HTT transcription rate compared to the L-allele (7). The L-allele can be further characterized by the presence of an adenine to guanine (A > G) change (8, 9). The L-allele with guanine (LG) and the S-allele have similar transcriptional activity, whereas the L-allele with adenine (LA) is associated with increased transcriptional activity (10). Based on the functionality of alleles (10), studies have compared “low” vs. “high” expressing allele carriers (i.e., LALA vs. S and LG carriers) (11, 12).

Few studies have examined 5-HTTLPR genotype in relation to substance use treatment outcome. In a study of African American cocaine and alcohol abusers, S-allele homozygotes showed less improvement on drinking measures at 6-month follow-up (22). Another study found that the 5-HTTLPR S-allele was associated with relapse to alcohol over 3-month follow-up among Caucasian males treated for alcohol dependence (23). The study of treated alcohol dependent males discussed the possibility that the 5-HTTLPR S-allele does not directly influence substance use relapse, but may have effects on outcome through an intermediate phenotype involving impaired behavioral control, as manifested by externalizing behaviors. No study has examined whether 5-HTTLPR genotype has an indirect effect on treatment outcome through intermediate phenotypes of externalizing or internalizing behaviors.

This study addresses gaps in knowledge regarding 5-HTTLPR genotype as a predictor of adolescent substance use treatment outcome. We hypothesized, as suggested by research with treated adults (23), that 5-HTTLPR genotype would be indirectly associated with adolescent posttreatment alcohol and marijuana problem severity through the intermediate phenotype of externalizing behavior. Specifically, S/LG allele carriers, relative to LA homozygotes, were predicted to report greater externalizing behavior [see Ref. (24)], and greater externalizing behavior was predicted to be associated with greater alcohol and marijuana problem severity at 6-month follow-up [see Ref. (5)] (see Figure 1). 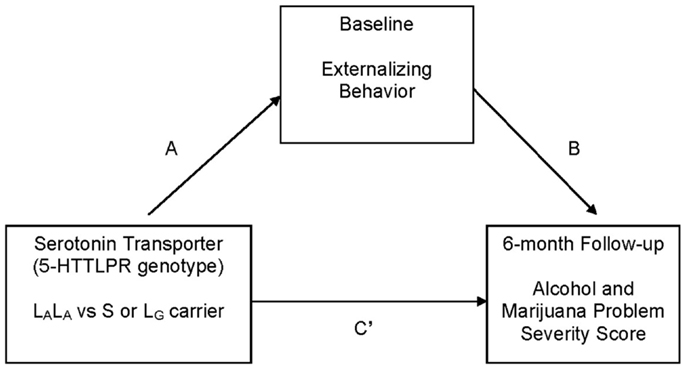 In the United States, 6.1% of youth (ages 12–17) met criteria for a DSM-IV alcohol or illicit drug use disorder in the past year (25). The prevalence of past year substance use disorder in the urban setting of Pittsburgh, PA, USA is similar to national prevalence rates (26). This study recruited 209 adolescents (ages 14–18) from community-based substance use treatment in Pittsburgh. Of the 209 youth, 153 (73.2%) youth were successfully genotyped (n = 55 did not provide DNA, n = 1 sample could not be genotyped). Cases with missing data due to incomplete baseline questionnaires (n = 11) were excluded, resulting in a baseline analysis sample of 142 adolescents. Youth who were vs. were not included in the analysis sample did not differ (p > 0.10) on demographic characteristics (age, gender, race, and SES) or frequency of using alcohol or marijuana at baseline.

The analysis sample was 66.2% male. Based on self-reported race/ethnic identity, the sample was 86.6% Caucasian, 7.0% African American, and 6.3% other ethnicity (e.g., bi-racial). Average age was 16.7 (SD = 1.2). Sample demographic characteristics (Table 1) were similar to those of youth admitted to publicly funded substance use treatment (27). Participants were, on average, middle-class in socio-economic status [mean = 2.4, SD = 1.1; range = 1–5; (28)]. Most (85.9%) had a current (past 6 months) DSM-IV cannabis use disorder, and almost half (47.2%) had a current DSM-IV alcohol use disorder. Six-month follow-up data were available for 89% (n = 126) of the sample; those who did vs. those who did not complete follow-up did not differ on demographics, internalizing or externalizing symptoms, and baseline alcohol or marijuana problem severity (p > 0.15). 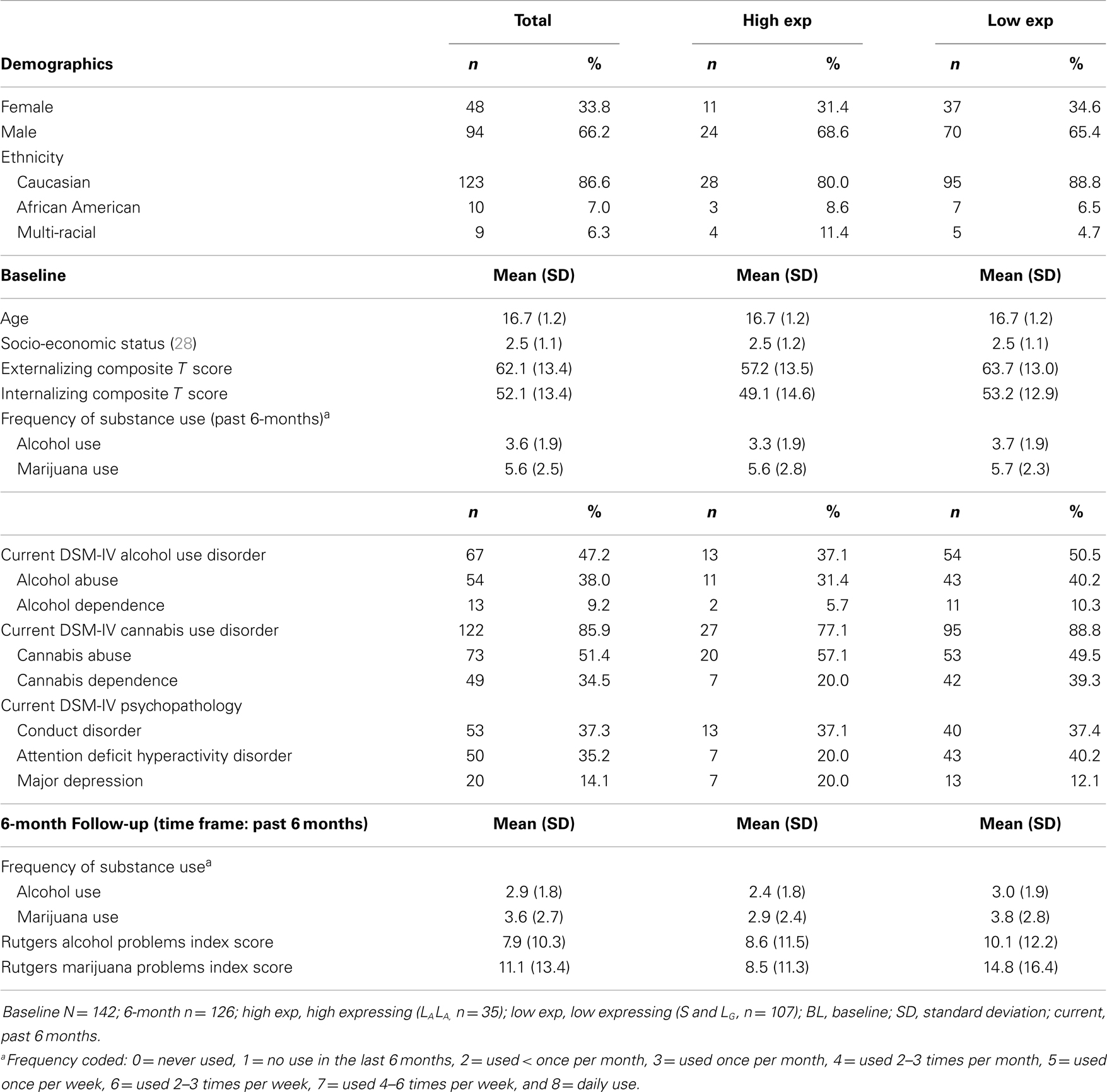 Youth admitted to community-based intensive outpatient substance use treatment were approached to participate in a longitudinal study on treatment outcome (29, 30). Treatment involved three 3-h group sessions per week for 6–8 weeks, with content that supported a goal of abstinence from alcohol and illicit drugs. Informed consent (from 18 years olds) or assent (from minors, with informed consent for the minor’s participation provided by the minor’s parent) was obtained prior to initiating study procedures. The baseline assessment, which was typically completed within 2 weeks of treatment entry, collected substance use and psychiatric data. The same domains were assessed at follow-up. Baseline data were collected from 2004 to 2009. Highly trained research associates collected interview data with high reliability (31), and saliva DNA according to protocol. Youth completed questionnaires at home, which were returned at the interview session or by mail. The University of Pittsburgh’s Institutional Review Board approved the study protocol (no. IRB0402001).

DNA from saliva was collected using a mouthwash protocol (32). Samples were subjected to whole genome amplification using multiple displacement amplification (33), quantified by the pico green protocol, and diluted to 40 ng/μl for storage. A polymerase chain reaction protocol followed by double restriction endonuclease digestion was used to identify the 5-HTTLPR (SLC6A4) and rs25531 variants: S, LA, and LG (9). The primer sequences were: (forward) 5′-TCCTCCGCTTTGGCGCCTCTTCC-3′, and (reverse) 5′-TGGGGGTTGCAGGGGAGATCCTG-3′. The L-allele was subtyped for rs25531. The A > G SNP of rs25531 was concurrently detected by digesting the amplified fragments with MspI (New England Biolabs, Beverly, MA, USA), where the A > G substitution creates an additional MspI site. Amplification products were simultaneously resolved by electrophoresis on 3.5% agarose gels.

Measures of Substance Involvement and Psychopathology 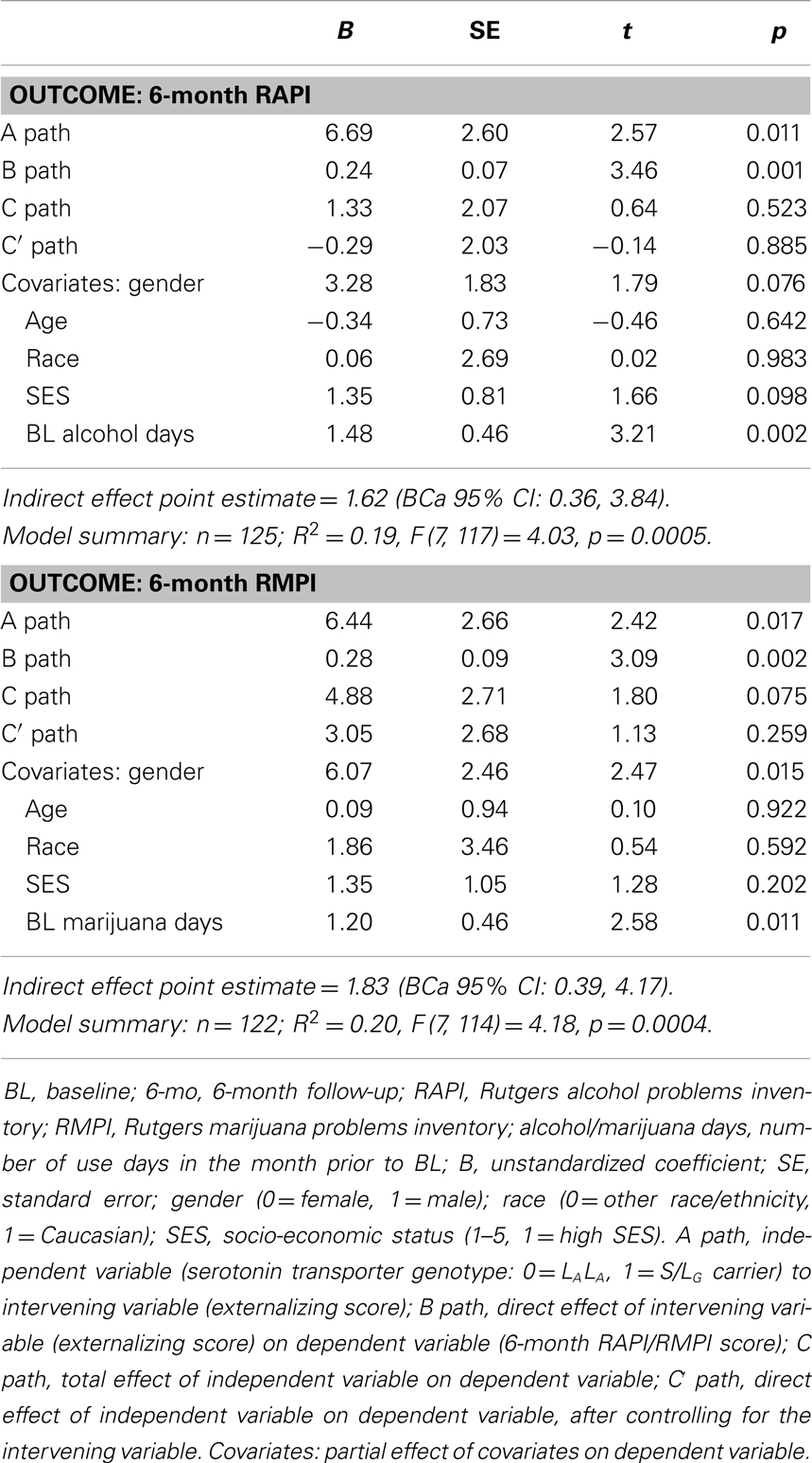 The absence of an association between 5-HTTLPR genotype and internalizing behaviors in this study may reflect the relatively low prevalence of mood and anxiety disorders in this sample. Further, the association of ADHD with low expressing alleles observed in this study differs from other work, which reported associations between the L-allele and ADHD [e.g., Ref. (46)]. The disparate findings obtained in this study relative to prior research might be explained, for example, by specific patterns of co-occurring psychopathology in a given sample, interactions among genes (e.g., epistasis) and haplotypes [e.g., Ref. (47)], and effects of environmental conditions that were not examined.

Results are generally consistent with adult treatment studies, which found that the 5-HTTLPR S-allele was directly associated with worse outcome (22, 23). The current study provides a unique contribution in finding that low expressing 5-HTTLPR alleles were only indirectly linked with alcohol- and marijuana-related problems at 6-month follow-up in treated youth, through severity of externalizing behavior. These novel results in a sample of youth in substance use treatment tentatively suggest that 5-HTTLPR genotype, which was associated with externalizing behavior, might provide a possible target for treatment related to serotonergic functioning and externalizing behavior [see Ref. (48)].

The mixed findings in the literature regarding associations of low expressing 5-HTTLPR genotypes with externalizing and substance use phenotypes urge caution in the interpretation of this study’s results. Although study findings are consistent with research reporting that low, relative to high, expressing alleles are associated with externalizing behavior and substance use, and other studies have found the opposite pattern. For example, low level of alcohol response in men, which is associated with alcohol dependence, was correlated with high expressing 5-HTTLPR genotypes (LA homozygotes) (8), suggesting that an association between the L-allele and alcohol dependence may be specific to certain subgroups (18), and differ by gender (49). The mixed findings across studies might reflect differences in sample ascertainment and phenotype definition, and whether co-occurring psychiatric conditions, and L-allele subtypes and haplotypes were examined (50).

This study had limitations. The majority of participants were Caucasian, male, and in substance use treatment (primarily for cannabis use disorder), which limits generalizability. Sample size overall was limited. Analyses did not correct for multiple comparisons, and results require replication. A comparison group of adolescents with no substance use problems was not examined. Measures of more narrowly defined phenotypes (e.g., response inhibition), which may underlie externalizing behaviors, were not examined. Haplotype analyses were not done. Only one candidate region of the SLC6A4 gene was examined. Ideally, whole exome sequencing of all genes involved in serotonergic metabolism would be conducted to rule out rare variants, which could bias results by exerting a stronger effect on the phenotype than HTTLPR length alone.

Youth with low expressing 5-HTTLPR genotype and externalizing behaviors may benefit from interventions that address serotonergic functioning [see Ref. (48)], and intensive treatment that simultaneously aims to reduce externalizing behaviors and substance use [e.g., Ref. (51)]. However, further research is needed to more precisely identify relevant treatment targets, and to replicate results. With regard to public health implications, predictive and diagnostic genetic testing for psychiatric conditions is promising, yet premature, given mixed findings and relatively small effects of common genetic variants (52). However, greater understanding of single gene effects, based on multiple methods (e.g., whole exome sequencing, model systems) and converging results, is critical to characterizing the pathophysiology of complex diseases, which could ultimately guide the development of novel treatments for substance use (6).

25. Substance Abuse and Mental Health Services Administration. Results from the 2012 National Survey on Drug Use and Health: Summary of National Findings. Rockville, MD: Department of Health and Human Services (2013).

26. Substance Abuse and Mental Health Services Administration. Substance Use and Mental Disorders in Metropolitan Areas: Results from the 2005-2010 National Survey on Drug Use and Health (2010). Available from: http://www.samhsa.gov/data/NSDUHMetroBriefReports/index.aspx

36. Achenbach TM. Manual for the Youth Self-Report and Profile. Burlington: University of Vermont (1991).

Copyright: © 2014 Chung, Cornelius, Martin, Ferrell, Maisto and Clark. This is an open-access article distributed under the terms of the Creative Commons Attribution License (CC BY). The use, distribution or reproduction in other forums is permitted, provided the original author(s) or licensor are credited and that the original publication in this journal is cited, in accordance with accepted academic practice. No use, distribution or reproduction is permitted which does not comply with these terms.