Purpose: To date, laparoscopy has gradually become the gold standard for treatment of non-palpable testicles (NPT) with different success and complication rates. In this study, we aimed to evaluate outcomes of laparoscopic approaches for NPT.

Results: The median age (at surgery) and median follow-up time were 18 (range: 6–56) and 60 (range: 9–130) months, respectively. Overall success rate for two laparoscopy techniques was 87.8% during the maximal follow-up time. We observed wound infection in two, hematoma in one, testicular atrophy in five, testicular re-ascending in two patients at follow-up period. There was no statistical difference between two laparoscopic techniques for grade I (five vs. two patients, p = 0.14) and grade IIIb MCCS complications (five vs. two patients, p = 0.44).

Conclusion: Our results have shown that two laparoscopic approaches have low complication rates.

Undescended testis (UT) is the most common congenital anomaly of genitalia in newborn male infants. It occurs in approximately 3% of term and 30% of preterm infants (1). The etiology is still unclear, despite its frequency. Some factors are effective in occurrence of UT such as low birth weight, short gestational period, low intra-abdominal pressure, chromosomal anomalies, and hormonal factors (2, 3). Early diagnosis and treatment of UT is important because of fertility improvement and adequate physical examination (for increased risk of testicular malignancy) (4).

According to clinical assessment, UT divided into two groups: palpable and non-palpable. Approximately 20% of UT cases are non-palpable and non-palpable testicles (NPT) may be intra-abdominal, canalicular, atrophic, or absent. There is no superiority of radiological imaging modalities over physical examination for evaluation of NPT. In 1976, since Cortesi et al. described the use of laparoscopy for NPT evaluation, laparoscopy has gradually become the gold standard for localization (with 99% sensitivity) and eventual treatment of NPT when the testicle is still non-palpable under general anesthesia (5).

In this study, we aimed to evaluate our laparoscopic treatment outcomes and postoperative complications with modified Clavien classification system (MCCS) over 10-year period.

The study was approved by the Research Ethics Committee of Ankara University School of Medicine. We assessed data of 151 unilateral NPT who underwent laparoscopy at two institutions by two high volume surgeons, between January 2004 and December 2014. Data of patients were analyzed and included age (at surgery), follow-up time (month), laterality of testes, and postoperative complications. Postoperative complications (wound infection, hematoma, atrophy, and testicular re-ascending) were evaluated with MCCS. Wound infection and hematoma were considered at early postoperative period. Postoperative testicle size was measured with prader orchidometer according to contralateral testicle size at every visit till final visit. Testicular re-ascending was considered when testicles located above the scrotum at every visit till final visit.

Prior laparoscopy, physical reexamination was performed for confirmation of NPT diagnosis by surgeons after general anesthesia induction. Patients who have become palpable after general anesthesia induction were excluded from study. For all patients, laparoscopic examination was performed at same position (mild Trendelenburg). After Foley catheter placement, open Hanson technique was chosen for subumbilical trocar (5 mm) placement. Intra-peritoneal pressure was kept in 8–10 mm Hg. Vas deferens and spermatic vessels were evaluated in the only affected side. If required, two additional trocars were used.

In 17 (11.2%) patients, blind-ending spermatic vessels were observed at the time of surgery, and they were considered as complete testicular atrophy (vanishing testis). Testicular absent was considered (nine cases) if patients have no spermatic vessels and vas deferens during laparoscopic examination. In 22 (14.6%) testes, testicular vessels and vas deferens were seen entering in internal inguinal ring, inguinal exploration was performed. In 14 (9.3%) of them, we found viable testicles (canalicular testicles), and we performed inguinal orchidopexy during the same procedure. However, nubbin tissue was observed in eight (5.3%) patients, and we performed nubbinectomy. On histopathological confirmation of nubbinectomy, germ cell was not identified in all of patients. In 23 (15.2%) testes, atrophic testicles were observed via diagnostic laparoscopy, and laparoscopic orchiectomy was performed because of high risk of testicular cancer development. On histopathological examination, severe atrophic and fibrotic changes were resulted in all orchiectomy specimens. Cases of testicular absent, atrophic, canalicular testis, and nubbin tissue were excluded from study (totally 69 testes). 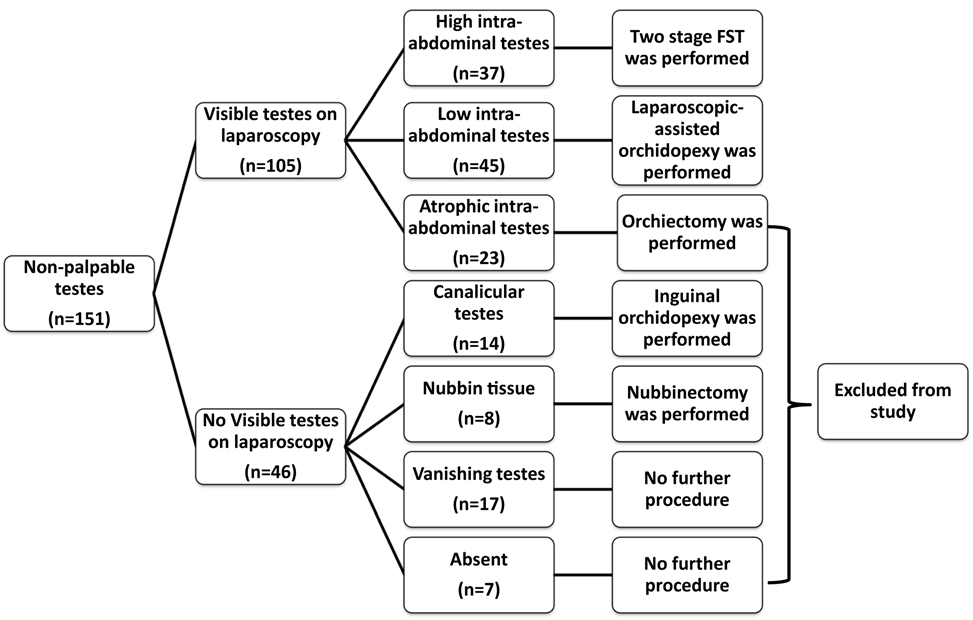 All statistical analyses were performed with SPSS ver.16.5 (Statistical Package for Social Sciences for Windows 16.5 Inc., Chicago, IL, USA). Age and follow-up time were assessed with non-parametric test, and all values were expressed as median values with range. Comparison of complications between two groups was evaluated with Chi-square test. p-value less than 0.05 was considered to indicate statistical significance. 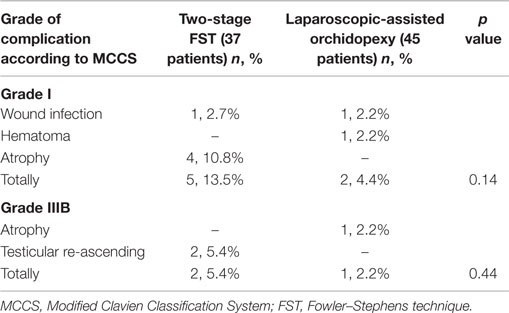 In 1929, Cooper et al. reported the first article about presence of histological changes in UT cases. They defined that histological changes were observed after 18 months of age in children who have UT (7). Furthermore, Hadziselimovic et al. have been reported about importance of early orchidopexy for improvement germ cell maturations and fertility rate, in their articles (8, 9). Then, Canavese et al. reported their 12-year experience in 916 children (10). They emphasized that orchidopexy must be performed till 12 months of age.

About one-fifth of UT cases are non-palpable on physical examination (4). Previously, ultrasonography, computed tomography, magnetic resonance imaging, gonadal arteriography, and venography have been tested for localization of NPT (11–15). Nowadays diagnostic laparoscopy widely accepted for NPT evaluation despite many non-invasive radiological investigations. First, the importance of laparoscopy on NPT evaluation was described by Cortesi et al. (5). Then, studies have gradually widespread, and diagnostic accuracy of laparoscopy on NPT diagnosis was demonstrated by many authors (16, 17).

In present study, we report complication rates of two laparoscopic procedures in 82 patients over a 10-year period (median follow-up time: 60 months). Intra-operative complication was not observed in our patients. Our postoperative wound infection, hematoma, atrophy, and re-ascending rates are 2.2, 2.2, 2.2, and 0% for LAO technique and 2.7, 0, 10.8, and 5.4% for two-stage FST technique. These rates were compatible with the current literature. In FST group, we did not observe atrophy and re-ascending after second step. According to previous studies, our atrophy rates of FST group (after completion of second step) were lower. The reason may be due to lower patient age (median 18 months). Furthermore, the difference of this study from previous studies, the severity of complication was categorized based on MCCS. First, Clavien et al. described a classification for complications (22). Then, Dindo et al. modified it (6). This modification was performed to add further precision and to characterize whether an intervention due to the complication led to general anesthesia, intensive care unit admission, or organ failure, and again, it was based on the type of therapy required to treat the complication. In our patients, the most common complication was testicular atrophy, and it was observed in five (50% of all complicated cases) patients. The other complications (wound infection, hematoma and testicular retraction) were observed in two (20%), one (10%) and two (20%) patients, respectively. There was no statistically significant difference for MCCS grade I (13.5 vs. 4.4%, p = 0.14) and grade IIIb (5.4 vs. 2.2%, p = 0.44) complications between two laparoscopic techniques. Life-threatening complications such as Grade IV or V were not seen in our patients.

Our study has several limitations. This study is in retrospective nature and the number of patients decreased to 82, because of excluding data (data of vanishing, atrophic, canalicular testicle, and nubbin patients) from study. Particularly, we observed canalicular testis in 14 (9.2%) patients during laparoscopic exploration. Probably, these patients were either insufficiently worked up or not well examined even under general anesthesia. Maybe we should have evaluated these patients with radiological investigation such as ultrasonography for excluding of canalicular testis. In addition, the postoperative atrophy could not be evaluated objectively because of intra-operative testicle size may measure different than real testis size under laparoscopic magnification. Furthermore, we did not use any radiological imaging method for evaluation of postoperative testis size and testis viability. Maybe, we could use ultrasonography or power color Doppler investigation for more objective assessment of postoperative size and viability of testes.

Laparoscopic exploration must be done in all of NPT cases for confirmation of diagnosis. Our results have shown that two laparoscopic approaches have low complication rates.

7. Cooper ER. The histology of the retained testis in the human subject at different ages, and its comparison with the scrotal testis. J Anat (1929) 64:5–27.

Copyright: © 2016 Hamidi, Telli, Bagci, Esen, Karagoz, Hascicek, Soygur and Burgu. This is an open-access article distributed under the terms of the Creative Commons Attribution License (CC BY). The use, distribution or reproduction in other forums is permitted, provided the original author(s) or licensor are credited and that the original publication in this journal is cited, in accordance with accepted academic practice. No use, distribution or reproduction is permitted which does not comply with these terms.