Lupus nephritis (LN) in Children is caused by Kidney involvement in systemic lupus erythematosus (SLE). SLE is a chronic, multi-systemic, paroxysmal autoimmune disease with a wide spectrum of autoantibodies. Hypercalcemia is a common manifestation of primary hyperparathyroidism and other malignant tumors. LN or SLE with hypercalcemia is rare. We report a case of LN with hypercalcemia and review the literature. It suggests that the pathogenesis of SLE complicated with hypercalcemia complicates the response of drug therapy.

We report an 11-year-old male patient who was hospitalized on January 23rd, 2019 and found to have elevated serum calcium for 4 months. Two years ago (December 2016), due to proteinuria, hypocomplementemia, anti-nuclear antibody, and positive anti-dsDNA, he was diagnosed as SLE and LN. The treatment of high dose methylprednisolone plus high dose cyclophosphamide and plasma exchange did not improve his condition. Urinary protein continued to be 4+~5+. Then mycophenolate mofetil (MMF) plus tacrolimus (FK 506) were used to treat. Glucocorticoid was gradually decreased during this period. MMF (0.375 g q12h, concentration of MMF is 53.741 ug/ml), FK 506 (1.5 mg qm and 1.0 mg qn, concentration of FK506 is 4.8 ug/L), and prednisone (10 mg qd) were being taken to treat LN. He had no history of taking excessive calcium and vitamin D preparations. There was no clinical manifestation of hypercalcemia at admission. At admission, SLE was in remission, urinary protein was negative, and SLEDAI score was 2 points (positive for anti-dsDNA). Physical examination: height 144 cm, weight 47.5 kg, body surface area 1.33 m2, no edema, superficial lymph node swelling, cardiopulmonary abdominal examination no abnormalities.

Erythrocyte sedimentation rate was normal. Urinary protein was negative. Twenty four hours urinary calcium was 4.07 mmol (normal range 2.5–7.5). His electrocardiogram was normal. Chest X-ray showed no abnormality in cardiopulmonary septum. CT scan of parathyroid imaging showed that SPECT/CT imaging was performed 15 and 120 min after intravenous injection of 99mTc-MIBI; 15 min showed that the left lobe of thyroid was irregular in shape; Radioactive aggregation could be seen at the lower pole of left lobe, and the right lobe of thyroid was normal; 120 min showed that the bilateral thyroid became pale obviously, and radioactivity could still be seen at the lower pole of the original left lobe. CT tomography and fusion images showed uniform low-density abnormal shadow of about 8 mm *7 mm in size below the left thyroid lobe, about the level of the first thoracic vertebra, with relatively uniform internal density, no obvious calcification, CT value of about 34 HU, slight abnormal 99mTc-MIBI concentration in the corresponding part of the fusion image; parathyroid imaging (posterior lower left lobe) Yang Sex. SPECT/CT indicated hyperplasia of the parathyroid gland. Ultrasound showed hyperplasia of the parathyroid gland. Hypercalcemia caused by malignant tumors has been excluded during hospitalization.

At the beginning of hypercalcemia treatment, the low calcium diet, intravenous saline infusion and furosemide were given to increase calcium excretion. Continue to treat LN with MMF, FK 506, and prednisone, the decrease of serum calcium was not obvious, and after hydrotherapy and diuretic treatment, the decrease of serum calcium was not obvious, the fluctuation of serum calcium was 2.88–3.09 mmol/L, and there was a stage 1 of acute kidney injury (2019-2-2 BUN 8.9 mmol/L, CR 87 umol/L, CCR 80.44 ml/min.1.73 m2). Parents refused hydrotherapy and diuretic treatment. The patient was discharged without any symptoms. CR decreased to normal (61 umol/L) 2 days after discharge. Parents refused to do genetic testing for multiple endocrine adenomatosis type 1. A half year follow-up: the patient is in good condition, without any medication. Under the control of the low calcium diet, his serum calcium level fluctuated at 2.7–3.0 mmol/L. 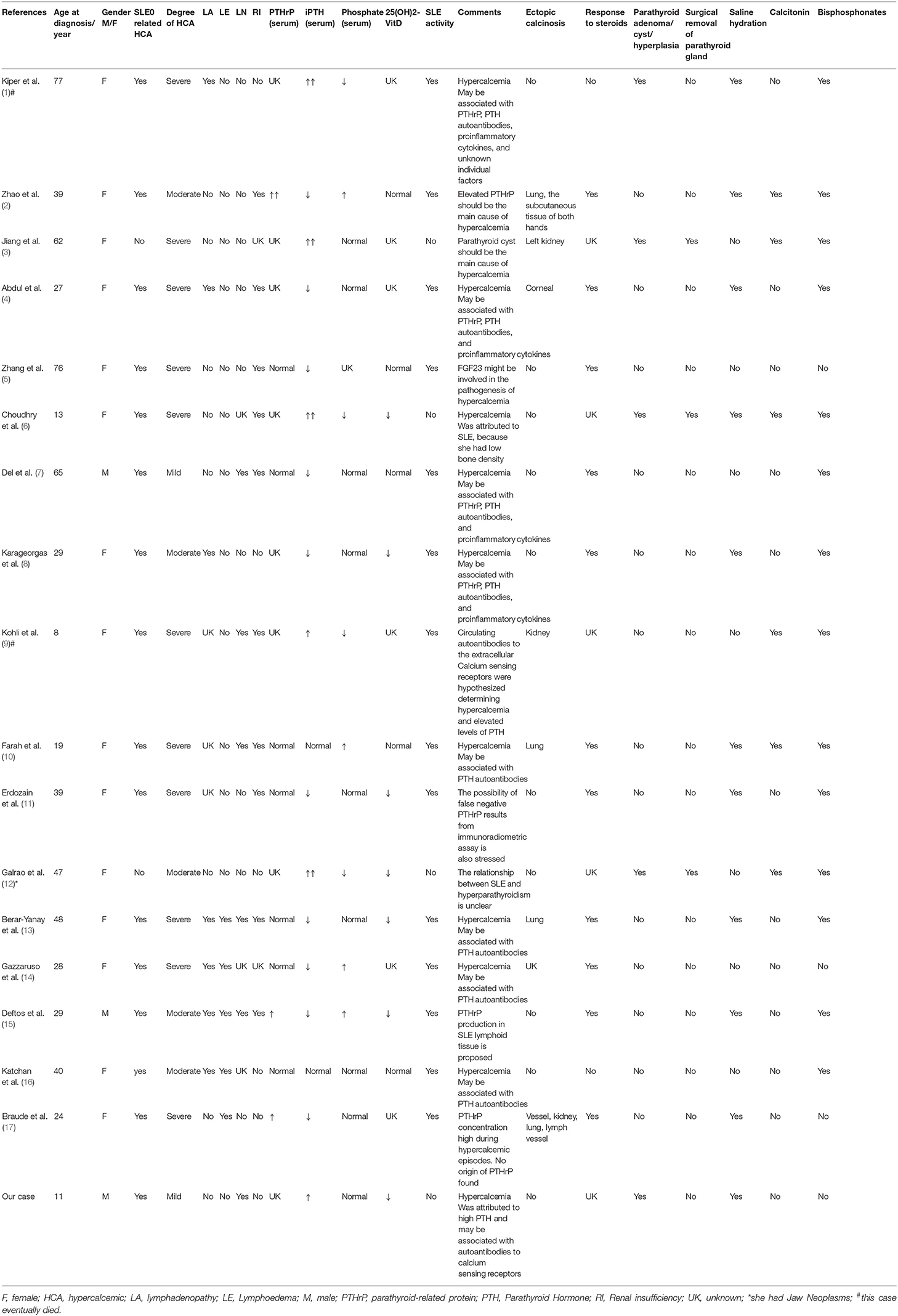 Table 1. Literature review of SLE or LN with hypercalcemia.

Few articles have described the relationship between renal histopathology and the severity of hypercalcemia, especially in patients with SLE. Braude et al. (17) reported a 24-year-old woman, who was diagnosed SLE, severe hypercalcemia and renal calcium deposition. Hypercalcemia as the cause of renal calcium deposition. The relationship between hypercalcemia and immune response in renal inflammation is unclear. Kohli et al. (9) reported a 8-year-old girl, who was diagnosed SLE with class IV lupus nephritis, severe hypercalcemia, renal calcium deposits. Her kidney biopsy showed diffuse proliferative glomerulonephritis with high activity index. Deftos et al. (15) reported a 29-year-old male, who was diagnosed SLE with lupus nephritis, moderate hypercalcemia, his renal biopsy demonstrated evidence of immune complex deposition and membranous glomerulonephritis, with areas of focal proliferative change and severe interstitial nephritis. And our case was characterized by mild asymptomatic hypercalcemia. His renal biopsy was immunocomplex nephritis, mild activity, LN III. Therefore, we believe that the severity of renal histopathology may be related to the severity of hypercalcemia.

In all these cases reported in the literature, SLE with hypercalcemia is very rare, and the related mechanism is not clear. The possible pathogenesis involves elevated blood PTH level, excessive endogenous production of PTHrP or the presence of autoantibodies against PTH receptor antibodies, which mostly occur in the active phase of SLE. PTHrP may be produced by non-malignant lymphoid tissue in SLE. PTHrP has the same sequence homology with PTH, which can mediate the occurrence of hypercalcemia. Polyclonal overactivation of B lymphocytes in SLE may produce anti-PTH receptor autoantibodies, which may activate PTH receptors, bind to PTH receptors and activate PTH-mimetic effects, and inhibit the expression of PTH and PTHRP, leading to hypercalcemia. It may also produce autoantibodies to extracellular calcium-sensitive receptor (CaSR), leading to hypercalcemia. In addition, some cytokines released by active SLE patients, such as interleukin (IL)−6, IL–1, and prostaglandin E, may stimulate osteoclast bone resorption and lead to hypercalcemia. However, hypercalcemia did not occur in all active and remission SLE patients. The results showed that unknown individual factors may also contribute to the occurrence of hypercalcemia.

Our case meets American Rheumatic Society (ACR) SLE classification criteria. After excluding other common and uncommon causes of hypercalcemia, we believe that hypercalcemia may be a feature of SLE. Because of the absence of serositis and lymph node enlargement, granulomatous, SLE variant, hypercalcemic lymphadenopathy syndrome and sarcoidosis, are not supported. The presence of hypercalcemia, hypophosphatemia, and elevated levels of iPTH suggest that hypercalcemia is not secondary to the production of PTHrP and anti-PTH receptor autoantibodies, because their characteristic manifestations are low PTH levels. Because our case with hypercalcemia was in the remission stage of SLE, the probability of producing autoantibodies was low. In this patient, because immunosuppressive drugs such as glucocorticoid, MMF, and FK 506 can induce hypocalcemia, so immunosuppressive therapy does not cause hypercalcemia. Ultrasound showed hyperplasia of parathyroid gland with elevated iPTH. Considering the possibility of hypercalcemia caused by primary hyperparathyroidism, it can not entirely exclude that the production of autoantibodies to SLE is involved.

Interestingly, in our case, after routine saline infusion and furosemide diuretic treatment, blood calcium did not decrease but increase and combined with acute kidney injury stage 1 (excluding acute kidney injury caused by primary disease), suggesting that the treatment was ineffective. Our case was asymptomatic mild hypercalcemia, occasionally gastrointestinal discomfort, ineffective fluid replacement and diuresis, and then treated by oral rehydration, patient education, dietary adjustment, and avoidance of factors that may aggravate hypercalcemia (such as avoiding taking high-dose vitamin D or high-calcium foods). After treatment, serum calcium was mildly to moderately elevated. The highest level of serum calcium was 3.09 mmol/L. Studies have shown that hypercalcemia is aggravated by the loss of blood vessel content caused by insufficient intravenous fluids, which impair the renal calcium clearance rate. However, in our case, there is no dehydration and intravenous fluid infusion is sufficient, so there is no renal damage caused by loss of vascular content. We need to consider that SLE autoantibody production leads to ineffective fluid infusion and diuretic treatment. Although our case was in remission stage, it was not excluded that SLE produces autoantibodies to extracellular calcium-sensitive receptors, which leaded to elevate levels of hypercalcemia and PTH, so it was ineffective for rehydration and diuretic therapy. Considering that the pathogenesis of SLE complicated with hypercalcemia complicates the response of drug treatment, the medical treatment of SLE-related hypercalcemia is necessary. Clinicians should be more cautious in choosing treatment options and monitoring relevant indicators.

This study was approved by the ethics committee of the First Affiliated Hospital, Sun Yat-sen University. Signed informed consent was obtained from the parents of this patient.

This study was supported by National College Students Innovation and Entrepreneurship Training Program (201901092 and 201901095).

We thank the family for their contribution to this study.

Copyright © 2019 Xu, Zhang, Pu, Yue, Mo and Jiang. This is an open-access article distributed under the terms of the Creative Commons Attribution License (CC BY). The use, distribution or reproduction in other forums is permitted, provided the original author(s) and the copyright owner(s) are credited and that the original publication in this journal is cited, in accordance with accepted academic practice. No use, distribution or reproduction is permitted which does not comply with these terms.