University of Electronic Science and Technology of China, China

Materials and Methods: Bullying victimization was measured using the Chinese version of the revised Olweus Bully/Victim Questionnaire. Life satisfaction was assessed using the Multidimensional Students' Life Satisfaction Scale (MSLSS). Life satisfaction is composed of five domains, namely, family, school, friends, environment, and self-satisfaction. Left-behind status of rural children was defined as one or both their parents migrating to working in cities. The data were analyzed using Mann–Whitney U tests, Chi-square tests, and multivariate linear and logistic regression analyses.

School bullying, including physical forms (e.g., kicking, hitting), verbal forms (e.g., teasing, called mean names, threatened), or psychological aggression (e.g., isolation or rumors), is a worldwide public health issue (1–4). According to a recent national representative study in China, the prevalence of school bullying victimization among primary school students (Grade 1–6) is the highest when compared with middle school (Grade 7–9) or high school students (Grade 11–12) (5). A further study in China showed that compared with high grade children (Grade 10), Grade 6 students have a 5.03-fold risk of being bullied (6). These findings indicate that bullying is likely to occur and is a significant concern for primary school students. Mounting evidence has demonstrated that bullying victimization increases the risk of negative and detrimental mental health problems, such as psychological distress, low life satisfaction, depression, and suicidality (7–10). These negative impacts are detrimental and progress into adulthood (11, 12).

Life satisfaction is a subjective assessment of life quality and is usually achieved by getting individual general needs, goals, or desires satisfied (13). If these basic but important needs or goals are not met or achieved, this usually results in unhappiness or contributes to further mental problems (14, 15). For school age students, their life satisfactions include different domains of life, namely, family, friends, school, self, and environment (16). Several studies have explored the association between bullying victimization and life satisfaction, demonstrating that bullying is associated with significantly lower life satisfaction (10, 17–19).

The left-behind children (LBC) phenomenon refers to the status of a child or adolescent with one or both their parents leaving their home or hometown for work for at least 6 months (20–23). The LBC phenomenon is highly prevalent in major labor export provinces, especially in central and western provinces (24). Hunan Province is a relatively deprived socioeconomic province, and the LBC phenomenon is quite common in Hunan Province. It has been estimated that there were 4.3511 million LBC in the rural area of Hunan Province according to a national survey conducted in 2010 (24). Also, a recent systematic review showed that 91 of 111 studies investigating health impacts of left-behind status were conducted in China (20). LBC are vulnerable to many health problems, such as depressive symptoms (25), oral health problems (26, 27), and delayed growth (28). Notably, emotional, behavioral, and metal health problems in LBC have been comprehensively examined in different countries. Measures have included bullying victimization, life satisfaction, depression, and suicide attempts (11, 20, 29–31). In previous studies, left-behind status or experience was shown to be a moderator of association between children's or teachers' behavior and students' mental traits (32, 33). For example, a school-based health survey in China conducted in 2017 showed that the association between self-esteem and aggressive behavior was more profound in participants with left-behind experiences, and this study found significant interactions between left-behind experience and self-esteem on aggressive behaviors (32). No previous studies have examined the moderating role of left-behind status on the association between bullying victimization and life satisfaction.

To examine the hypothesis, we conducted a cross-sectional study on the children of Hunan Province, China, to verify the association of bullying victimization and life satisfaction. We also explored the interactive effects between left-behind status and school bullying on different domains of life satisfaction (family, friends, school, self, and environment satisfaction).

This present study was conducted in Hunan Province, one of Central China's most populated provinces, with 68.22 million residents and an area of 211,800 km2 in 2016. Hunan Province exports large quantities of labor force to other coastal developed cities every year. The left-behind phenomenon is quite common in children, especially in rural or western areas of Hunan Province. According to a national survey in 2010, the number of LBC in rural Hunan Province is estimated to be 4.3511 million (24).

For bullying victimization, we used the Chinese version of the revised Bully/Victim Questionnaire developed by Dan Olweus (34). We asked the participants six questions to be answered on a 3-point scale (0 = never, 1 = sometimes, 2 = often): in the past 30 days have you (1) been teased in a hurtful way; (2) been blackmailed; (3) been rejected or isolated by peers; (4) been threatened; (5) been hit, kicked, pushed, shoved around, or locked indoors; and (6) been made fun of due to your physical appearance (34). This questionnaire has proven to have good reliability and validity and has been used widely in China in previous studies (29, 35–37). The Cronbach α coefficient was 0.78 in the current study. Children reported at least one question of being bullied with the option of “often” in the past month being defined as being bullied as outlined in previous studies (36, 38).

In this study, we used the definition of left-behind as defined in previous studies (20, 21, 23). When one or both parents migrate from where the child lives and leaves behind the child to live alone or with grandparents or other relatives for at least 6 months, then, the child is categorized as LBC (21–23). For further analysis, we divided the subjects into two groups: LBC with one parent migration group and LBC with migration of both parents group.

Life satisfaction was assessed using the Multidimensional Students' Life Satisfaction Scale (MSLSS) Chinese version, with a Cronbach α coefficient of 0.90 and a retest reliability of 0.869 obtained in previous studies (39, 40). The MSLSS has five subscales to measure five domains of life satisfaction: family, school, friends, environment, and self-satisfaction. The subscales have acceptable internal consistency and were validated in previous studies for children (39, 40). These are useful and widely used for the assessment of students' life satisfaction (16, 41–43). The Cronbach's alpha value of MSLSS in the present study was 0.869. 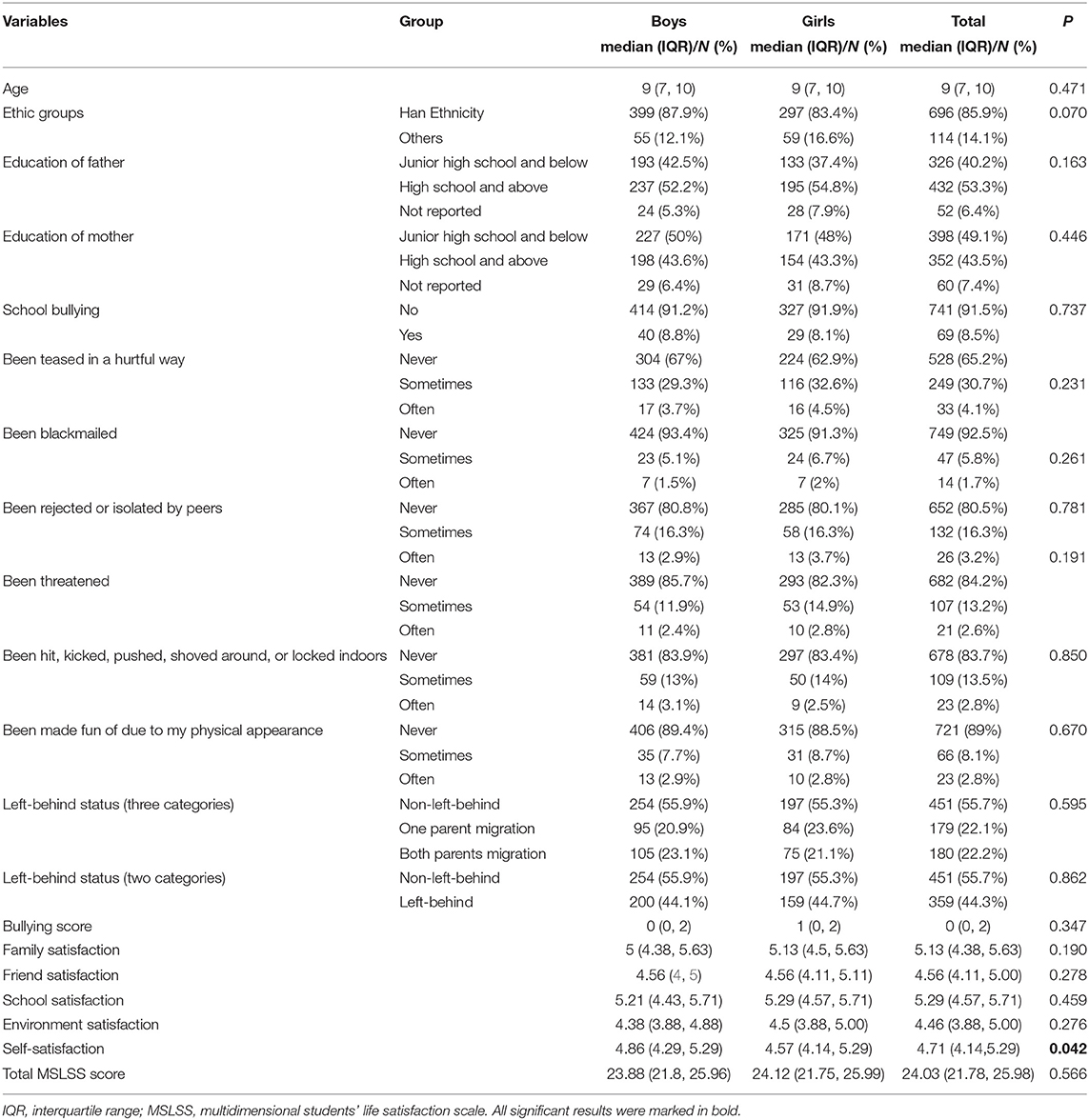 Table 1. The general characteristics of the study population.

Association Between Bullying Victimization and Different Domains of Life Satisfaction 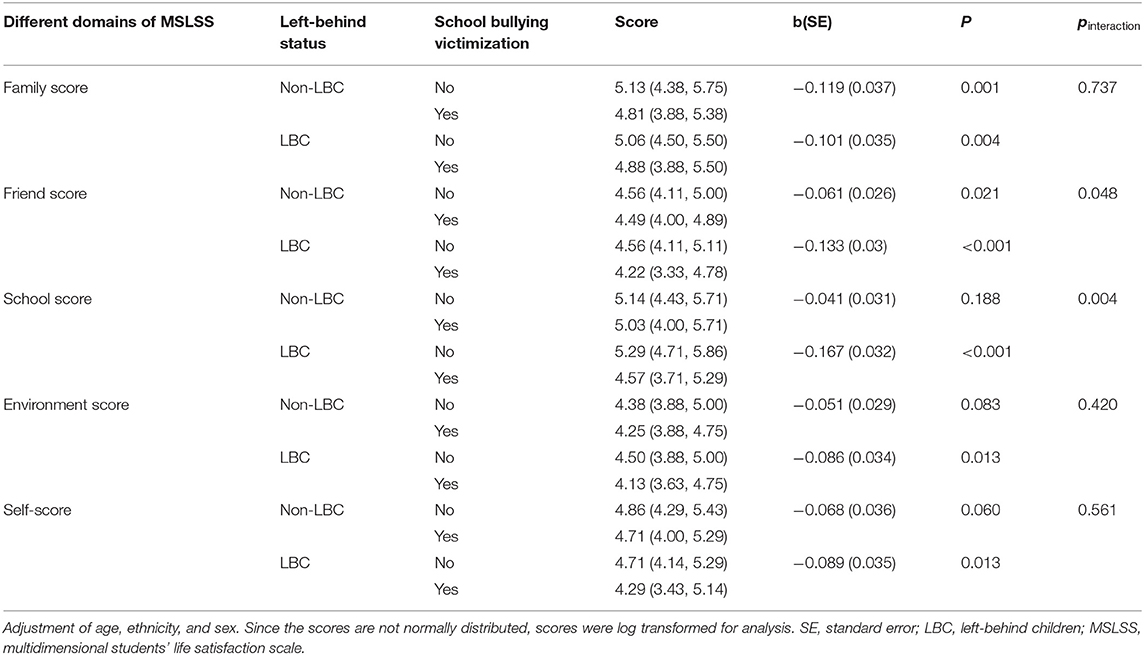 There are some limitations in our study. Firstly, the present study is a cross-sectional study that could only provide associations but not causal inference. Future studies should be longitudinal or even interventions that should be conducted to verify and better understand the associations outlined here. Secondly, this study was only conducted in three districts of Hunan Province by convenience sampling, which may limit generalizations to other areas of China. Thirdly, the current study only involved primary school students; therefore, the results obtained could not be generalizable to children of other ages or migrant status.

The studies involving human participants were reviewed and approved by Review Board of Hunan Normal University. Written informed consent to participate in this study was provided by the participants' legal guardian/next of kin.

YY, ZZ, and CZ conceived and designed the study. YY, CZ, MX, SY, MZ, SH, and YZe contributed for literature research, data collection, data analysis, manuscript preparation, and manuscript revision. YZh, XY, YW, JSB, and ZZ contributed for literature search and manuscript revision. All authors listed have made a substantial, direct and intellectual contribution to the work, and approved it for publication.

The authors are grateful to all the children who participated in this study and the teachers who contributed to this study.

Copyright © 2021 Yang, Zheng, Xie, Yuan, Zeng, Zhou, Huang, Zhu, Ye, Zou, Wang and Baker. This is an open-access article distributed under the terms of the Creative Commons Attribution License (CC BY). The use, distribution or reproduction in other forums is permitted, provided the original author(s) and the copyright owner(s) are credited and that the original publication in this journal is cited, in accordance with accepted academic practice. No use, distribution or reproduction is permitted which does not comply with these terms.