Results: Macrophages were successfully polarized to M1 or M2 by assessing the expression of inflammatory factors. Pro-inflammatory factors and CD16/32 in M1 macrophages were decreased, and the expression of CD16/32 in lamina propria were inhibited after treatment with hydrogen, but the changes has no effects in other tissues. Hydrogen inhibited the NF-κB p65 in M1 macrophages nucleus and distal ileum of NEC. HE staining showed hydrogen could attenuate the severity of NEC.

Conclusion: Hydrogen could attenuate the severity of NEC through promoting M1 macrophages conversion by inhibited the expression of NF-κB p65 in the nucleus.

Necrotizing enterocolitis (NEC) is a serious gastrointestinal disease, mainly affecting premature neonates, especially in extremely low-birth-weight infants. Despite over six decades of clinical and basic research, the pathogenesis of NEC remains unclear (1). The overall mortality rate associated with NEC is between 20 and 30% (2, 3). Premature infants have immature intestinal and deficient immune function. Some scholars expressed that insufficient immune function is involved in the pathogenesis of NEC, and macrophages play a vital role in the development of NEC as well (4–7).

Molecular hydrogen as a medical gas to measure the local blood flow firstly reported in 1964, and then hydrogen was used as a biomarker for the early diagnosis of NEC (15, 16). Ohsawa et al. demonstrated that hydrogen can protect against oxidative damage by selectively reducing cytotoxic oxygen radicals, and our previous study also revealed that hydrogen-rich saline protects NEC from oxidative stress and inflammation (17, 18). It is well-known that NF-κB plays a key role in the immune system and polarization of macrophages (19–21). Xu et al. showed that inhalation of hydrogen gas protects liver against ischemia/reperfusion injury and also attenuates renal injury in severe acute pancreatitis and ameliorates bowel injury in a model of NEC by the NF-κB signaling pathway (22–24).

RAW264.7 macrophages were purchased from the Cell Bank of the Type Culture Collection of Chinese Academy of Sciences (Shanghai, China). Cells were grown in Dulbecco's modified Eagle's medium (DMEM) containing 10% fetal bovine serum (FBS; Gibco) and cultured at 37°C with 5% CO2 in a humidified incubator.

Bone marrows were harvested from femurs and tibia of C57B6/J mice (aged 8–12 weeks) and cultured in the presence of recombinant mouse M-CSF (20 ng/ml; R&D Systems) in RPMI 1640 medium for 7 days as described previously (21, 25). BMDMs were washed and cultured in different mediums to polarize M1 or M2 macrophages.

The following experimental protocols were performed according to the Ethical Guidelines for the Use of Animals in Research, and this study was approved by the Animal Care Committee of the Children's Hospital of Shanghai. In addition, 8-day-old C57BL/6J mice were used to establish the model of NEC as previously described (26–28). The mice were purchased from Shanghai Super B&K Laboratory Animal Corp. (Shanghai, China), and randomized into the following groups: Group 1, CON (n = 18); Group 2, NEC (n = 19); Group 3, CON + H2 (n = 18); and Group 4, NEC + H2 (n = 20). All the mice were hand-fed trans-orally every 4–5 h with artificial formula using a 24-G catheter. Groups 2 and 4 had asphyxia for 10 min exposure to 95% nitrogen, followed by daily cold exposure at 4°C for 10 min twice before feeding. Groups 3 and 4 were daily treated with hydrogen-rich water (20 ml/kg/day, 0.5 mmol/L) twice before stress. Groups 1 and 2 were fed with cleaned water as control. We fed model mice water in the last 12 h to remove the resident in the intestine of mice.

The preparation of hydrogen-rich water was performed as described previously (18). Hydrogen was dissolved in water or DMEM medium for 4 h under high pressure (0.4 MPa) up to a supersaturation. The saturated hydrogen water or DMEM medium was sterilized by gamma radiation and stored under atmospheric pressure at 4°C. It was freshly produced every day and detected by a portable determination instrument ENH-1000 to ensure a stable concentration of 0.6 mmol/L (18, 30).

Total RNA was extracted from macrophages using TRIzol reagent (Catalog No. 15596-026; Life Technologies, USA) according to the manufacturer's protocol. Aliquots of 1 mg of total RNA were reversely transcribed using Super-Script Reverse Transcriptase (Invitrogen, USA) and Oligo-dT (18)-primers (Invitrogen, USA). The RT-qPCR was carried out by using SYBR Green Master Mix Kit in ABI Prism 7000 Sequence Detection System (Applied Biosystems, USA) according to the manufacturer's instructions. Glyceraldehyde-3-phosphate dehydrogenase (GAPDH) was amplified as an internal standard. The primers used are shown in Table 1. The expression levels of the messenger RNAs (mRNAs) were reported as fold changes vs. control. 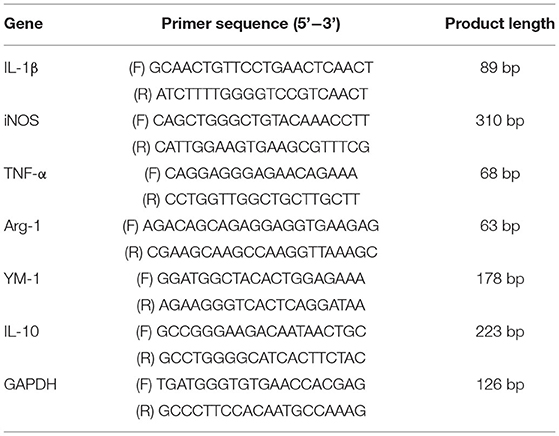 M1 macrophages were identified with monoclonal antibodies specific for BB515-CD11b (BD, 564454) and APC-Cy7-CD16/32 (BD, 560541), and M2 macrophages were detected with antibodies specific for BB515-CD11b and Alexa Flour@647-CD206 (BD Biosciences, San Jose, CA, USA) antibodies, then CD16/32 or CD206 represent M1 or M2 macrophages, respectively. For immunophenotypic analysis, macrophages were gently detached with cold phosphate-buffered saline (PBS), pipetted into single cells, and then suspended at 1 × 106 cells/ml. Cell suspensions were washed with PBS and then followed by incubation with the antibody mixtures for 30 min on ice boxes in the dark. Cells were then washed with buffer solution twice. Data were immediately acquired by using BD LSR II using FlowJo software.

To isolate the cells from the lamina propria of newborn mice with the method previously described (21, 31), 2-cm distal ileum samples were cleaned from mesentery, finely minced with scissors, and then incubated in DMEM containing 10% FBS and 10 mM dithioerythritol (D8255; Sigma-Aldrich, USA), which was preheated to 37°C. Tissue was incubated for 20 min with gentle agitation. Supernatants containing the enterocyte were discarded. Lamina propria leukocytes were then isolated from the remaining tissue digestion at 37°C for 40 min in RPMI, 10% FBS, 100 U ml−1 collagenase (C0130; Sigma-Aldrich, USA), and 15 μg/ml DNase (D4527; Sigma-Aldrich, USA) with gentle agitation. After that, cells were washed twice in cold PBS with 1% BSA and filtered through sequential 70-μm and 40-μm cell strainers.

Distal ileum tissues were weighted and cut into small pieces according to the manufacturer's instructions. Macrophages were washed with PBS and collected for extracting proteins. Cytoplasmic and nuclear proteins were extracted using the EpiQuickTM Nuclear Extraction Kit I (OP-0002; EpiGentek, Farmingdale, NYUSA) (32). The nucleoprotein concentration was quantified with bicinchoninic acid (BCA) Assay Kit (Thermo Fisher Scientific, USA) and stored at −80°C. The protein samples were denatured at 100°C for 5 min, separated on 10% acrylamide gels, and then electrotransferred to polyvinylidene fluoride (PVDF) membranes. Afterwards, the membranes were blocked in TBST containing 5% fat free milk at room temperature for 2 h. The blots were incubated overnight at 4°C with primary antibodies: rabbit anti-mice P65 (ab32536; Abcam, UK) and Lamin B1 (12987-1-AP; Proteintech, USA) at 1:1,000 and 1:2,000, respectively. The membranes were washed three times with TBST and incubated for 1 h at room temperature with goat anti-rabbit IgG and goat anti-mouse IgG (1:5,000; Proteintech, USA). After washing three times for 10 min with TBST, the membranes were visualized and imaged using a chemiluminescent substrate (Clinx, Chemiscope 3500, China). Lamin B1 protein was used as an endogenous control as well.

Statistical analysis was performed using SPSS 22.0 software (IBM, USA), and the data were presented as mean ± standard deviation (SD) of at least three independent experiments. The incidence of NEC was compared with chi-squared test. A p-value < 0.05 was considered statistically significant.

Effect of Hydrogen on Inflammation Cytokines in M1 or M2 Macrophages 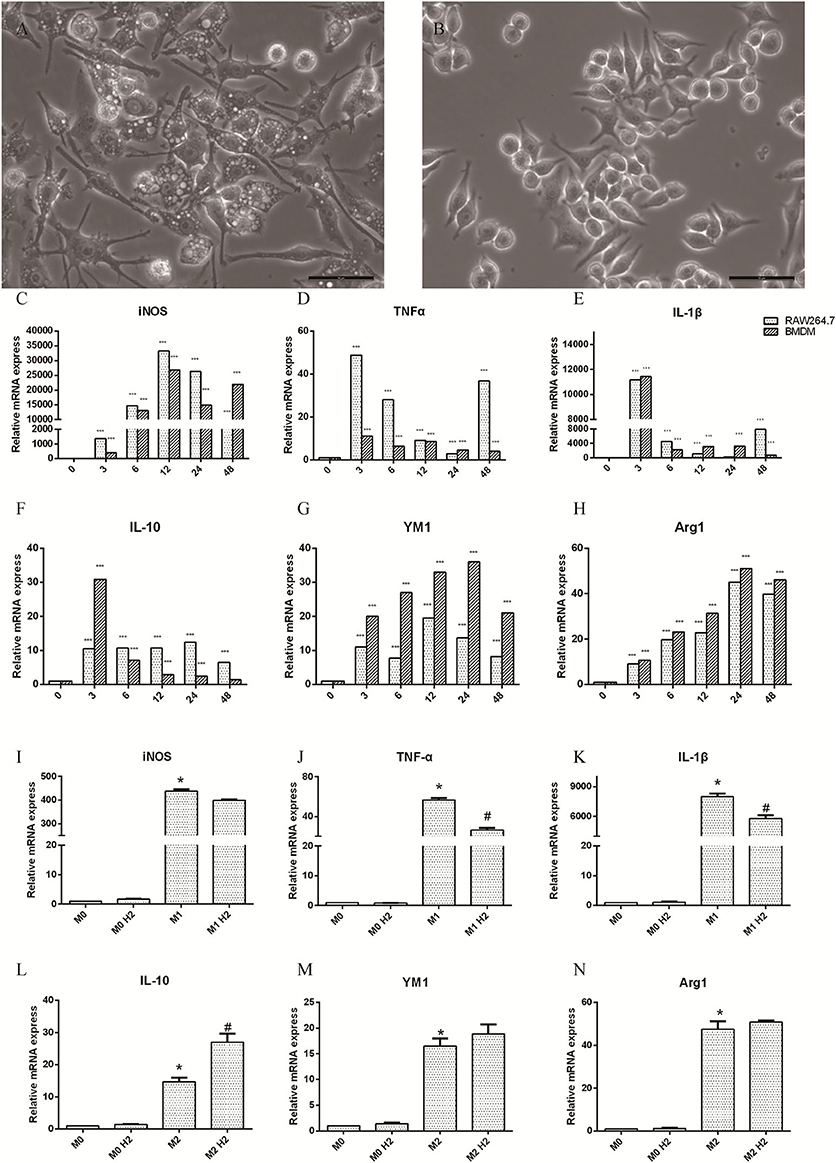 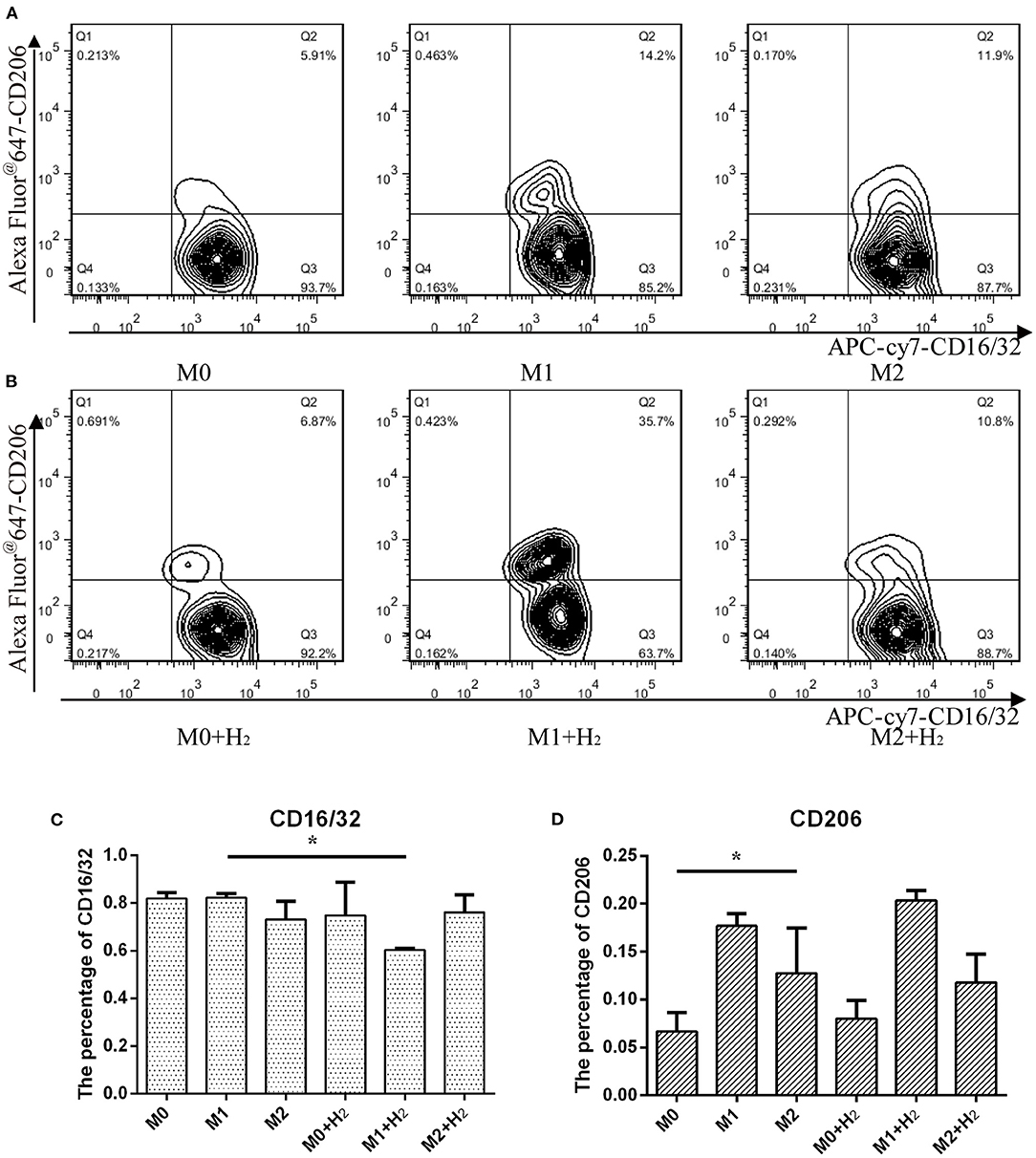 The Incidence of NEC in Mice Model and Histological Evaluation 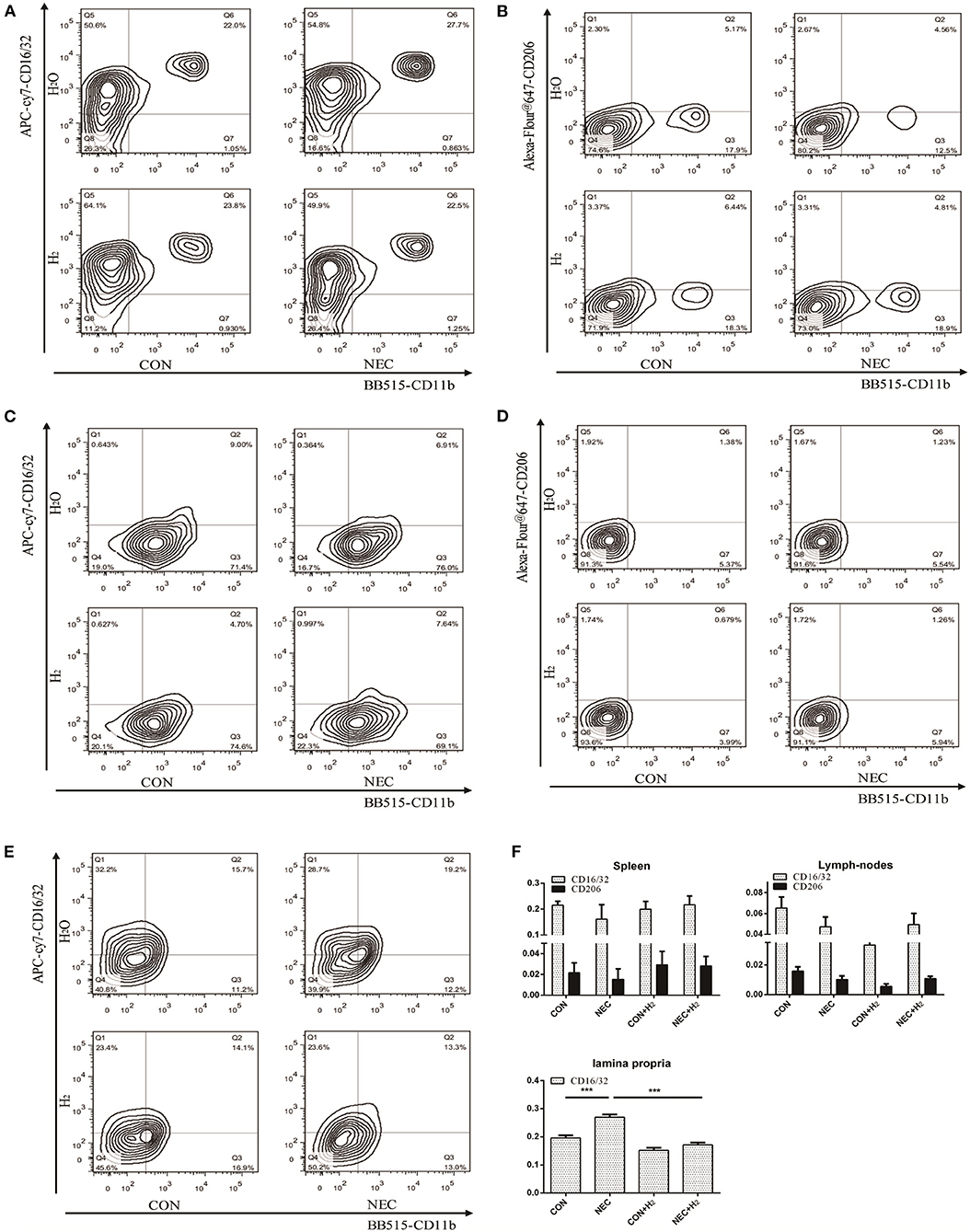 Expression of NF-κB p65 in Distal Ileum and M1 Macrophages 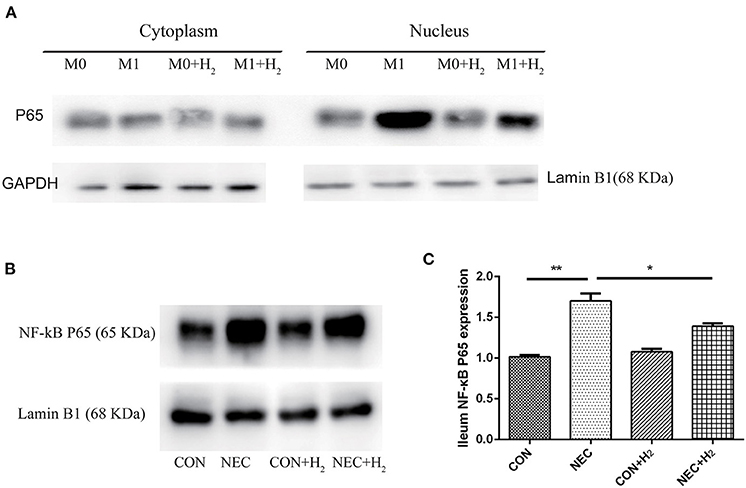 NEC is a common gastrointestinal disease, mainly affecting prematurity, and extremely low-birth-weight infants; however, the pathogenesis of NEC is still not fully clear. Hence, in the present study, the NEC model was established to explore the mechanism and therapeutic effects (2, 34, 35). There are many experimental models of NEC available, and researchers may choose different models depending on the purpose of the study. However, we have no idea as to which of the models is truly NEC. In our study, hypoxia, cold stimulation, and artificial formula feeding were used to establish the NEC model, without LPS induction. It was done to exclude the effect of LPS-induced inflammatory stimulation on the outcome. A positive control with LPS may be more appropriate in study design. The older the model animal, the more mature the intestinal development, and the lower incidence of NEC. However, the incidence of NEC in different age groups has not been reported. Pierro et al. found that osmolality of enteral formula had no significant correlation with the incidence of NEC. Therefore, the NEC model was established by hypoxia and cold stimulation and formula feeding (36, 37). The incidence of NEC was 52.63% higher than the control group (p < 0.001). By comparing the HE staining score of terminal ileum, it was revealed that the NEC score was decreased from 2.26 ± 0.99 to 1.60 ± 0.68 after treatment with hydrogen. There were no remarkable changes in incidence of NEC between the NEC group and the NEC+ H2 group, which may be related to the mice used for the established model, which are too mature even though they are not beyond 14–21 days of age (35). We analyzed the weight of mice during the experiment, in which the results showed that the decrease of body weight in the NEC group was higher than that in the CON group, while there was no significant difference among other groups during the experiment. We supposed hydrogen may not increase the body weight of NEC mice.

We also investigated the percentages of M1 and M2 macrophages in abdominal lymph nodes and spleen in the NEC model; however, the results disclosed that the changes observed among different groups were not statistically significant. Previous studies reported that macrophages in the lamina propria of the intestine plays a key role in the development of an immune response (38–40). Therefore, we assessed the percentage of M1 macrophages in lamina propria. The results showed that expression of CD16/32 M1 macrophages was higher in the NEC group than in the CON group. Moreover, after intervention with hydrogen, the expression of CD16/32 in M1 macrophages was remarkably decreased.

Hydrogen has been shown to have selectively reduced ROS and anti-inflammation by Ohsawa et al. (18). Hydrogen is a new therapeutic medical gas with anti-oxidant, anti-inflammatory, and anti-apoptotic effects on cells and organs, but not applied extensively in clinical practice. Instead of hydrogen molecule, hydrogen-rich saline or water, which is safer and easier to apply, may be more suitable for clinical applications. However, there are many issues that need to be resolved (molecular mechanism, the optimal dose and period, long-term effects, etc.) before the practical clinical application. Our team provides a new method for the role of hydrogen in NEC (17), thus giving hope to solve the previous problems.

There are several limitations in the present study. Firstly, we used mice fed with clean water as a control group, other than bed with their mother together. Secondly, we did not analyze the correlation between the NF-κB signaling pathway and the inflammatory cytokines. We will further analyze the molecular mechanisms of hydrogen regarding polarization of macrophages in NEC.

The animal study was reviewed and approved by and the experimental protocols were performed according to the Ethical Guidelines for the Use of Animals in Research, and this study was approved by the Animal Care Committee of the Children's Hospital of Shanghai.

Copyright © 2021 Yu, Lv, Gao, Shi, Sheng, Zheng, Zhou and Wang. This is an open-access article distributed under the terms of the Creative Commons Attribution License (CC BY). The use, distribution or reproduction in other forums is permitted, provided the original author(s) and the copyright owner(s) are credited and that the original publication in this journal is cited, in accordance with accepted academic practice. No use, distribution or reproduction is permitted which does not comply with these terms.