Objective: This study aims to investigate the monocular and binocular accommodative amplitude (AMP) and accommodative function (AF) in children with different types of intermittent exotropia (IXT).

Methods: A total of 40 children with IXT were enrolled in the study. Monocular and binocular AMP and AF were measured using the modified approach method and the ±2D flip method, and the differences between the fixing and non-fixing eyes of non-strabismic children and children with different types of IXT were compared.

Exotropia is the deflection of the optic axis caused by poor binocular fusion function, whereby the optic axis is unable to control the anteroposterior position. Its pathogenic factors include hereditary disease, prenatal adverse environments (such as maternal toxicological exposure), preterm labor, perinatal disease, and a family history of strabismus, astigmatism, and anisometropia. A 2007 paper by Chia also considers myopia to be one of the risk factors for exotropia (1).

Intermittent exotropia (IXT) is a common form of exotropia, accounting for 50–90% of all cases (2). This disorder usually occurs in children and has been studied globally by ophthalmologists (3). The onset of IXT is mainly caused by an imbalance in the convergence and abduction functions. Accommodation and convergence can be linked processes: patients with IXT may increase accommodative convergence to maintain monocular vision in both eyes (4).

Studies of IXT traditionally focus on surgical methods and outcomes, eye position control, and stereopsis (6). Recently, the focus has shifted to include the visual study of patients with IXT and abnormal accommodation. However, the current research is insufficient (7). Although recent studies show that the difference in accommodative amplitude (AMP) and accommodative function (AF) between the fixing and non-fixing eyes in IXT patients is significant (8), little research has been conducted in this area or on the subject of AF in different types of IXT. Therefore, in this study, we attempt to establish the characteristics of binocular accommodative function in children with IXT by using retrospective analysis to analyze and observe the AF parameters of the fixing and non-fixing eyes. We also compare the differences in binocular accommodation across the various types of IXT.

A total of 40 children (19 boys and 21 girls) with IXT, treated as outpatients at our hospital between December 2018 and June 2020, were enrolled in the study. All were between 6 and 12 years of age. The research process and aims of the study were explained to the children's parents, and their consent to participate was obtained. The study was reviewed and approved by the ethics committee of our hospital (number HDFYLL-2020-068).

Patients were included in the study if they met the following criteria: exotropia deviation ≥15Δ, ability to control the anteroposterior position, best-corrected visual acuity (BCVA) ≥0.8, and normal eye movement. Patients with the following conditions were excluded from the study: >1D anisometropia and astigmatism, amblyopia, nystagmus, vertical strabismus, AV syndrome, dissociated strabismus, or those undergoing accommodative training or with a history of strabismus surgery. Subjects underwent routine ophthalmic examinations to exclude anterior and posterior segmental organic diseases and to ensure no systemic diseases were present that could affect their cooperation in the study.

Grouping Standard for the Subjects

All patients underwent an eye test. Those with ametropia received mydriatic optometry following ciliary muscle paralysis. Their pupils were then re-examined after recovery, and the mean refractive spherical equivalent was recorded. The assessments were carried out on the basis of correction of refraction, and both eyes were examined in the order of fixing eye then non-fixing eye. Each measurement was recorded three times, and a mean value was taken.

AMP measurements were obtained using a modified approach method (9). The subjects were asked to look at a near visual target 40 cm away from the eye. A negative lens (−4.0 D) was added in front of the eye to make the near point seem further away. The visual target was slowly moved closer to the subject until they reported blurring, and the distance at this point (the near-point distance) was recorded. The close-point distance was then calculated using the formula AMP = 100/near-point distance (in cm). The final AMP value was obtained by adding 4.0 D.

AF was determined using the ±2 D flip method. Again, the subjects were required to look at a near visual target 40 cm away from the eye. A flip lens was added in front of the eye, and the subjects were asked to report when the visual target became clear following each flip. The lens was flipped from −2.00 D to +2.00 D and then back again, and the number of cycles per minute was recorded.

The measurement data were represented by mean ± standard deviation ( ± s) and analyzed using SPSS 17.0 software. The data met normal distribution in a normality test. The AMP and AF of the fixing and non-fixing eyes in children with IXT were analyzed using a paired t-test. One-way analysis of variance was then adopted for the general data and the binocular AMP and AF of the four groups. Further pairwise comparison was carried out for statistically significant values.

Further pairwise comparisons reveal that exotropia deviation in children with convergence insufficiency was less than in the group with divergence excess exotropia (p = 0.002). The difference in 6 m and 33 cm exotropia deviation was not statistically significant (p > 0.05) between the other groups (Table 2).

Table 2. Comparison of far and near exotropia deviation of intermittent exotropia among three groups ( ± s).

Table 3. Comparison of AMP and AF between fixing eyes and non-fixing eyes in IXT children ( ± s). 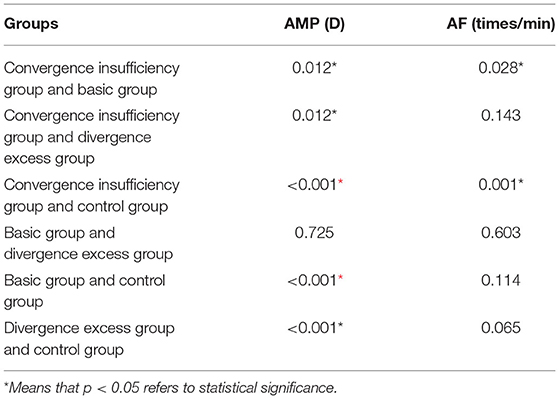 AMP refers to the maximum near accommodative scope that the eye can reach. It is measured using the clinical approach method. AF refers to the relaxation and utilization accommodation capacity of the eye. Within 1 min, both eyes of children aged 8–12 with no pre-existing conditions should see no less than five cycles, while the single eye should see at least seven cycles. In patients with IXT, a non-fixing eye typically exhibits deviation. However, to maintain eye position, the non-fixing eye may use convergence. This will lead to a difference in binocular accommodation, resulting in bilateral eye competition, which will cause a decrease in AF and accommodative response (12). This is consistent with the results of this study, in which it was found that the AMP of non-fixing eyes in patients with IXT is higher than that of their fixing eyes, suggesting that their fixing eyes should exhibit clear vision in everyday use.

The non-fixing eye, however, commonly manifests itself as a squint. To maintain the eye position in a highly accommodative state for an extended period of time, the eyes require a close-up view; this is especially true in school-age children. Therefore, they contribute to greater accommodative convergence, showing AMP magnification in the visual function examination. However, previous studies have demonstrated conflicting results. For example, some observed myopic anisometropia and found that the accommodative strength of non-fixing eyes was lower than that of fixing eyes, and also that the myopic diopter of non-fixing eyes was significantly higher than that of fixing eyes (13). In the present study, the difference in binocular refractive spherical equivalent between fixing and non-fixing eyes was not statistically significant (p = 0.543); whether the overlapping effect of IXT and refractive factors are the reasons for this difference requires further investigation.

The present study found that both the binocular AMP and AF of children with IXT were significantly lower than those of the non-strabismic children in the control group. This may be because the accommodative response of binocular fixation is higher than that of monocular fixation. It is suggested that the level of linkage sensitivity between the two eye movement systems, accommodation and convergence, is low. Typically, the accommodation of both eyes is coordinated and unified. However, patients with IXT do not have the same accommodative response in the dominant and non-dominant eye when both eyes are fixed on the near visual target. Patients with exotropia are in a state of accommodative tension, and it is difficult for their eyes to relax when the convergence remains fixed. Therefore, the transit time may be extended by passing the positive lens in the AF examination. Patients with exotropia need to mobilize more convergence functions during binocular fixation than those with healthy eyes to achieve binocular haplopia. Accordingly, the increased convergence will result in greater accommodation (14). Some studies have found that the binocular AF of patients with IXT is significantly lower than that of a control group, which is consistent with the results of this study (15).

Refraction may affect accommodative function. In this study, there was no significant difference in the spherical equivalent diopter of the four groups. Therefore, the influence of refractive factors can be excluded. Accommodative problems increase the risk of myopia in young children with IXT (19), and myopia and IXT are considered important co-existing diseases (20). This is reflected in the overlapping and mutual promotion of the pathogenesis and progression of the two diseases. Unfortunately, this study's cross-sectional analysis was limited to the AMP and AF of children with IXT. Moreover, only a small number of cases were observed. Therefore, a larger sample size should be used for future investigations.

The study was reviewed and approved by the Ethics Committee of the Affiliated Hospital of Hebei University (No.: HDFYLL-2020-068). Written informed consent to participate in this study was provided by the participants' legal guardian/next of kin.

This study was funded by the Hebei Baoding Science and Technology Plan Project (2041ZF173) and Hebei Medical Science Research Project (20210175). The funding body had no role in the design of the study and collection, analysis, and interpretation of data and in writing the manuscript.

Copyright © 2021 Li, Li, Wang, Du and Li. This is an open-access article distributed under the terms of the Creative Commons Attribution License (CC BY). The use, distribution or reproduction in other forums is permitted, provided the original author(s) and the copyright owner(s) are credited and that the original publication in this journal is cited, in accordance with accepted academic practice. No use, distribution or reproduction is permitted which does not comply with these terms.