Background and Aim: There is paucity of data regarding the epidemiology of pediatric IBD in Asia compared to that of Western countries. We aimed to investigate the incidence and prevalence trends of pediatric inflammatory bowel disease (IBD) in the Daegu-Kyungpook province of South Korea from 2017 to 2020.

Conclusion: Pediatric IBD, especially CD has significantly increased recently in the Daegu-Kyungpook province. Epidemiology studies from other regions of Asia are required to better elucidate this trend of increase in Asia.

The prevalence and incidence of pediatric inflammatory bowel disease (IBD) have increased rapidly worldwide over the past two decades. As the pathophysiology of IBD is yet to be elucidated, it is important to understand the epidemiology of IBD to understand the genetic and environmental factors (1). While the incidence of adult IBD is stagnant in some Western countries, the incidence in Asian countries, such as Japan, Korea and Singapore, is still on a rise (2–5). This difference in incidence trends between countries according to geographical location in adults has also been observed in children with IBD (6–8).

Various changes have occurred in the incidence trends of pediatric diseases due to the recent coronavirus infectious disease 2019 (COVID-19) pandemic. The increase of childhood obesity and decrease of infection-related systemic diseases is associated with compliance with the quarantine rules and changes in living patterns including increased activities at home (9–12).

In this study, we aimed to investigate the incidence and prevalence trends of pediatric IBD from 2017 to 2020 in the Daegu-Kyungpook province of South Korea. 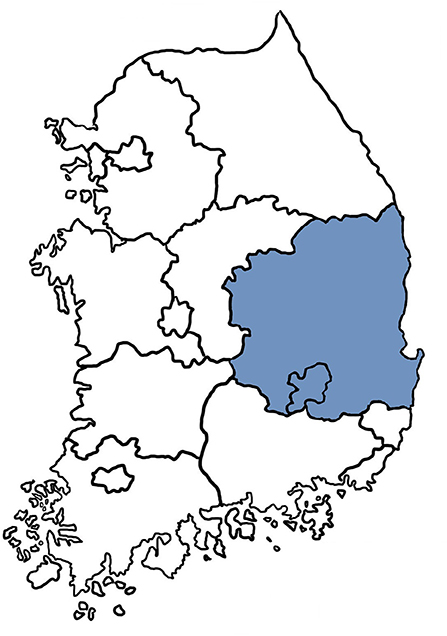 Figure 1. Map of South Korea and the Daegu-Kyungpook province.

Baseline demographics including gender, birth date, diagnosis date, diagnosis age, and type of IBD were retrieved from electronic medical charts by searching for diagnosis codes of 555.X and K50.XX for CD and 556.X and K51.XX for UC according to the ICD-9 and ICD-10 codes, respectively. Patients residing outside the Daegu-Kyungpook province at diagnosis were excluded from the incidence analysis, and those who had moved outside the Daegu-Kyungpook province were excluded from the next particular year of the prevalence analysis.

The annual number of children and adolescents newly diagnosed with IBD at the centers and the annual resident population of children and adolescents ≤18 years in the Daegu-Kyungpook province were investigated to calculate the population based annual incidence and prevalence of pediatric IBD in the region. By utilizing data from the Statistics Korea which is a government organization for statistics under the Ministry of Economy and Finance, the population based per 100,000 incidence and prevalence of IBD, Crohn's disease (CD), and ulcerative colitis (UC) were each calculated, respectively.

In addition, annual trends were analyzed according to the type of disease, gender, and age groups according to the Paris classification (13). Comparison of demographic factors was also conducted between patients diagnosed in the pre-COVID-19 (2017–2019) and the post-COVID-19 era (2020).

For statistical comparison between two groups, chi square test or Fisher's exact test was used for categorical variables, while Student's t-test were used for statistical comparison of continuous variables. Comparative data for continuous variables are expressed as medians with interquartile range (IQR) or means with standard deviation (SD). To test the statistical significance of the fluctuations of annual incidence, 95% confidence intervals (CIs) calculated by the Clopper-Pearson method (14) for incidence were compared among years. The Cochran-Armitage test was used to evaluate the incidence trend of IBD. Data were considered to be statistically significantly different if P < 0.05. Statistical analyses were conducted using R version 3.2.3 (http://www.r-project.org).

This study was conducted with approval from the Institutional Review Board (IRB) of Daegu Joint (IRB No. 2021-02-023), and informed consent was waived due to the retrospective nature of the study. We conducted this study in compliance with the principles of the Declaration of Helsinki. 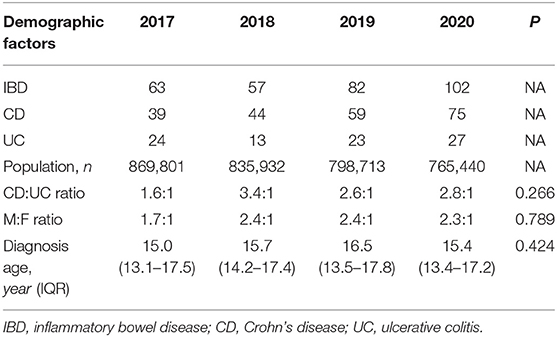 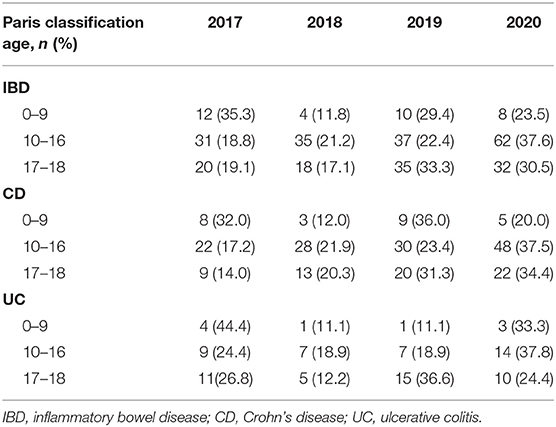 Comparison Between the Pre-COVID-19 and Post-COVID-19 Era

Comparison was conducted between patients diagnosed in the pre-COVID-19 (2017–2019) and the post-COVID-19 era (2020). Comparison of demographic factors are shown in Table 3. 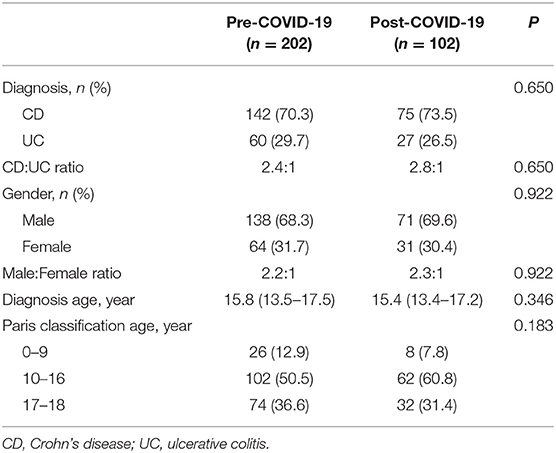 Table 3. Comparison of demographic factors between patients diagnosed in the pre- and post-COVID-19 era. 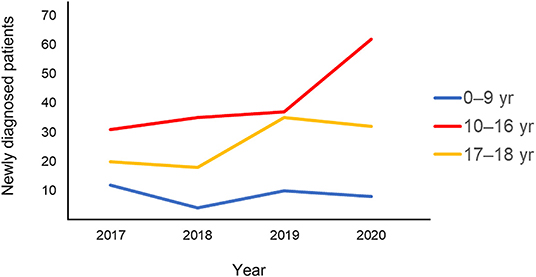 Population Based Incidence Trend of Pediatric IBD From 2017 to 2020 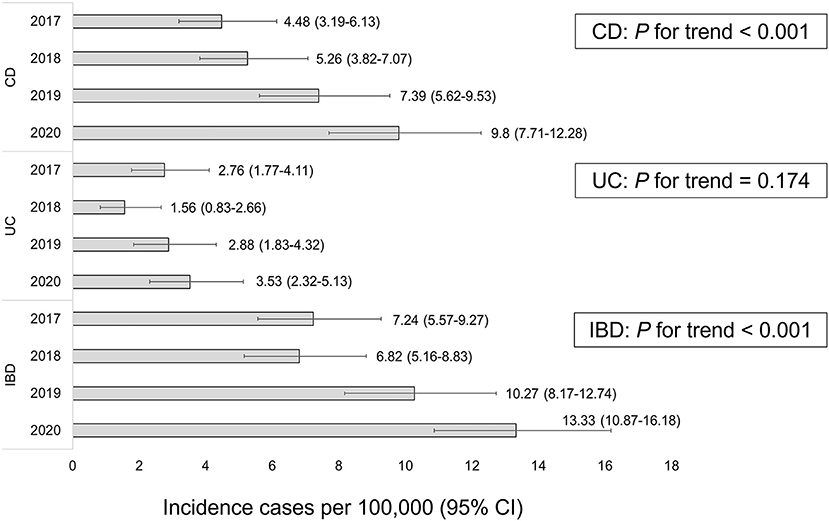 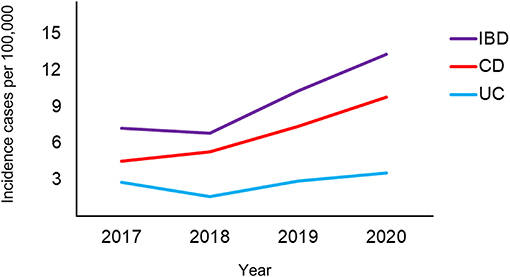 Population Based Prevalence Trend of Pediatric IBD From 2017 to 2020

In this study, we identified a significant increase in the incidence and prevalence of pediatric IBD, CD, and UC, respectively, in the Daegu-Kyungpook province of South Korea from 2017 to 2020.

CD to UC ratio may vary according to factors such as age, region, and also over time (2, 21). In a study conducted in Japan, pediatric UC dominated pediatric CD (22). Meanwhile, a study conducted in Singapore showed a CD dominance over UC in the pediatric age group, which is comparable of the results in this study (23). Globally, CD predominates over UC in regions of high IBD incidence (8). Recent data have shown higher rates of pediatric CD than UC in Europe and North America (8). Meanwhile, similar to the ratio of Japan, UC incidence is higher than that of CD in northern California, Finland, and Italy (24–26). The reason for these differences between regions is yet to be elucidated.

Several studies have reported that the age at diagnosis of IBD is decreasing with time (28–32). A recent study conducted in Israel showed that there was an average decrease in age at diagnosis from 15.0 ± 2.8 in 2002–2008 to 14.3 ± 3.1 in 2009–2016 (P < 0.001). Although we were unable to identify such statistically significant difference due to the short study period, we were able to observe that the median diagnosis age in 2020 had decreased compared to 2019. The decrease in diagnosis age may hypothetically result from the change in disease biology, known as the concept of genetic anticipation (30). Although genetic anticipation is well-established in some monogenic disorders, there are controversies regarding its relevance to polygenic disorders, such as IBD (30).

Although a statically significant increase was not identified compared to the pre-COVID-19 era, the highest annual incidences for pediatric IBD, CD and UC in this study were all observed in the post-COVID-19 era of 2020. Although there have been studies investigating the changes incidence of other diseases or health conditions (9–12), no study in Asia has yet investigated the change of incidence in pediatric IBD patients after the COVID-19 pandemic. This study is the first in Asia to investigate the incidence in the pediatric population of IBD after the COVID-19 pandemic.

Third, the change in lifestyle in the post-COVID-19 era may have influenced this increase. The COVID-19 pandemic has led to increased time spent at home and reduced physical activity, which has caused an increase in childhood obesity (9). In addition, the increased time spent at home and the explosion of food delivery services have increased the frequency of exposure to processed food instead of homemade food. This change in eating habits and activity may have led to an increase of exposure to environmental risk factors. Changes in diet and consequent alteration in the composition of the intestinal microbiota may be associated with the increasing incidence of pediatric IBD (40).

There are some limitations of this study, and therefore results of this study should be interpretated with caution. First, this study was conducted in a particular region in Korea, and therefore the results may not represent that of the whole country. Second, there is a possibility that some pediatric IBD patients in the region follow up to centers outside the region. Therefore, there is a possibility that these patients were excluded from this analysis. However, because most patients are initially diagnosed at centers located at the administrative district of residence, we believe the number of these patients are extremely small to influence the results of this study. Third, 4 years may be rather short for investigating the incidence trend in a particular region. Fourth, we were unable to investigate the incidence of IBD-unclassified (IBD-U) due to the lack of a diagnostic code for IBD-U on ICD-9 and ICD-10. Last but not least, this study was a retrospective study.

The studies involving human participants were reviewed and approved by Institutional Review Board (IRB) of Daegu Joint (IRB No. 2021-02-023). Written informed consent from the participants' legal guardian/next of kin was not required to participate in this study in accordance with the national legislation and the institutional requirements.

This work was supported by the National Research Foundation of Korea (NRF) grant funded by the Korean government (MSIT) (No. 2021R1A2C1011004).

Copyright © 2022 Choe, Choi, Song, Jang, Choi, Yi, Hong, Hwang, Cho, Kim, Choe and Kang. This is an open-access article distributed under the terms of the Creative Commons Attribution License (CC BY). The use, distribution or reproduction in other forums is permitted, provided the original author(s) and the copyright owner(s) are credited and that the original publication in this journal is cited, in accordance with accepted academic practice. No use, distribution or reproduction is permitted which does not comply with these terms.