The main objective of cancer management with chemotherapy (anticancer drugs) is to kill the neoplastic (cancerous) cell instead of a normal healthy cell. The bioassay-guided isolation of two new sesquiterpene coumarins (compounds 1 and 2) have been carried out from Ferula narthex collected from Chitral, locally known as “Raw.” Anticancer activity of crude and all fractions have been carried out to prevent carcinogenesis by using MTT assay. The n-hexane fraction showed good activity with an IC50 value of 5.434 ± 0.249 μg/mL, followed by crude MeFn extract 7.317 ± 0.535 μg/mL, and CHCl3 fraction 9.613 ± 0.548 μg/mL. Compounds 1 and 2 were isolated from chloroform fraction. Among tested pure compounds, compound 1 showed good anticancer activity with IC50 value of 14.074 ± 0.414 μg/mL. PASS (Prediction of Activity Spectra) analysis of the compound 1 was carried out, in order to predicts their binding probability with anti-cancer target. As a results the compound 1 showed binding probability with human histone acetyltransferase with Pa (probability to be active) value of 0.303. The compound 1 was docked against human histone acetyltransferase (anti-cancer drug target) by using molecular docking simulations. Molecular docking results showed that compound 1 accommodate well in the anti-cancer drug target. Moreover the activity support cancer chemo preventive activity of different compounds isolated from the genus Ferula, in accordance with the previously reported anticancer activities of the genus.

Different substances like foods, pharmaceuticals or some cosmetic agents exhibited cytotoxic property. The main objective of cancer management with chemotherapy (anticancer drugs) is to kill the neoplastic (cancerous) cell instead of a normal healthy cell. Different types of cells present in human as part of immune system including natural killers, cytotoxic cells, and lymphokine activated cells are responsible to destroy abnormal and damaged cells (Cano et al., 2011). Any agent having cytotoxic activity can be used in various pathological conditions (inflammation, AIDS, infection, and cancer; Su et al., 2009). The current studies revealed the bioassay-guided isolation of two sesquiterpene coumarins and their anticancer potential against PC3 cells (prostate cancer).

Whole plant of F. narthex was collected from Chitral located in Khyber Pakhtunkhwa, Pakistan, in July 2010, and was identified by the Taxonomy section Department of Botany University of Peshawar. A voucher specimen (BOT 20002) was submitted to the herbarium section of the same department.

Extraction and Isolation of Compounds

The collected plant of F. narthex was air dried in shade and was then powdered. Dry powder (8.0 kg) was extracted by methanol as an extraction solvent at room temperature for 14 days with daily shaking. After this it was filtered and the crude methanolic extract (900 g) was obtained which was concentrated under vacuum at low temperature (45°C). Then it was partitioned into n-hexane (70.0 g), chloroform (40.0 g), ethylacetate (29.0 g), and butanol (34.0 g) fractions. Chloroform fraction (40.0) was loaded onto silica gel column with increasing polarity of n-hexane/ethylacetate, which yielded number of sub-fractions A-G out of these fractions D (3.4 g) and E (1.3 g) obtained from 25 and 35% ethyl acetate/n-hexane respectively were resubjected to column chromatography. Sub-fraction D was further subjected to silica gel column by using n-hexane/acetone as eluting agent, which yielded compound 2 (600 mg) (8% acetone/n-hexane), While compound 1 (24.0 mg) was obtained from sub-fraction E at 9% acetone/n-hexane solvent system.

Anticancer activity of compounds was evaluated in 96-well flat-bottomed micro plates by using the standard reduction of MTT colorimetric assay (Dimas et al., 1998). For this purpose, PC3 cells (prostate cancer) were cultured in DMEM, containing 5% of FBS, 100 μg mL−1 of streptomycin and 100 IU mL−1 of penicillin in 25 cm3 flasks, in an incubator at 37°C under a 5% carbon dioxide atmosphere. The exponentially growing cells were counted with a haemocytometer and diluted to a concentration of 1 × 105 cells mL−1. The diluted culture was then introduced into 96-well plates (100 μL well−1) with various concentrations of the compounds in the range 1–100 μM and incubated overnight. After incubation, medium was separated and 50 μL MTT (2 mg mL−1) was added to each well and incubated further for 4 h. Subsequently, 100 μL of DMSO was added to each well. The MTT was reduced to formazan within viable cells and its absorbance was measured at 570 nm using a microplate ELISA reader (Spectra Max plus, Molecular Devices,CA, USA).

The molecular docking procedure was widely used to predict the binding interaction of the compounds in the binding pocket of the enzyme. The 3D crystal structure of human histone acetyltransferase was downloaded from Protein Data Bank (PDB ID: 4PZS) (Oikonomakos et al., 2000). All the ions and water molecules were removed and the hydrogen atoms were added to the enzyme by the 3D protonation using the MOE (Molecular Operating Environment) (www.chemcomp.com) software. The target enzyme were then energy minimized by the default parameters of the MOE for the stability and further assessment of the enzyme. The structures of the compounds were built in MOE and energy minimized using the MMFF94x forcefield and gradient: 0.05. The synthesized compounds were docked into the active site of the target enzyme in MOE by the default parameters i.e., Placement: Triangle Matcher, Rescoring: London dG. For each ligand ten conformations were generated. The top-ranked conformation of each compound was used for further analysis.

IC50-value was presented as mean ± S.E.M (standard error of the mean) calculated by using the formula

Compound 1 was isolated as a white amorphous solid from the chloroform-soluble part of the crude extract of F. Narthex Boiss. Its molecular formula C24H30O4 was deduced with the help of 13C NMR as well as HRESI-MS. Compound 1 (Figure 1) was found to be a sesquiterpene coumarin. The detail spectroscopic data of compound 1 were already reported in our previous article (Bashir et al., 2014). All of the spectral data of compound 2 have molecular formula C24H30O4 was found to be unambiguously matched with the reported data for conferol, previously isolated from Ferula pallida (Su et al., 2000).

Figure 1. Structures of compound 1 and 2.

Natural organic compounds have extensively used as a new pharmacophore template in drug discovery. The bio-assay guided isolation of new anti-cancer agents (compounds 1 and 2) were performed from F. narthex. In the preliminary step of bio-assay guided isolation the all crude fractions were evaluated for their anti-cancer activity against PC3 cells (prostate cancer). As a result, the n-hexane fraction showed significant activity against PC3 cancer lines with an IC50 value of 5.434 ± 0.249 μg/mL, followed by crude MeFn extract 7.317 ± 0.535 μg/mL, and CHCl3 fraction 9.613 ± 0.548 μg/mL (Table 1). After fractionation of chloroform, the compounds 1 and 2 were isolated. Both the isolated compounds were also evaluated against PC3 cancer lines by employing the same protocol that were used for the fractions Among tested pure compounds, only the compound 1 showed good anticancer activity with an IC50 value of 14.074 ± 0.414 μg/mL. The remaining fractions and compound 2 showed no activity against PC3cancer cell lines and the IC50 values of these were >30 as presented in Table 1. 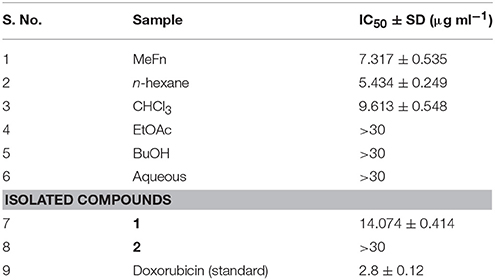 Table 1. Anticancer activity of crude MeFn extract and various fractions along with pure compounds 1 and 2.

As reported previously regarding the anticancer potential of Ferula, the oleo-gum resin of F. foetida was reported to prevent carcinogenesis (Saleem et al., 2001). This activity support the use of various isolated compounds from this genus for treatment of cancer along with other co-administered anticancer agents like vincristine (Unnikrishnan and Kuttan, 1990; Saleem et al., 2001). A prenylated coumarin (diversin, 1) together with four new sesquiterpene lactones (diversolides A, D, F, and G, 2-5) isolated from the roots of Ferula diversivittata were showed cancer chemo preventive activity (Iranshahi et al., 2010). Galbanic acid isolated from F. assafoetida was reported to exhibit anticancer effect (Kim et al., 2011).

PASS (Prediction of Activity Spectra) is an online tool (Lagunin et al., 2000), which predicts almost 900 types of activities based on the structure of a compound. PASS analysis (Table 2) of the compound 1 predicts anti-cancer activity (antineoplastic) with Pa (probability to be active) value of 0.303. To evaluate the inhibitory nature of the compound 1 as anti-cancer agent, the compound 1 was docked against human histone acetyltransferase (anti-cancer drug target), molecular docking simulations were carried out. Molecular docking is an efficient method to get an insight into ligand-receptor interactions. Molecular docking studies were performed using Molecular Operating Environment (MOE) software (www.chemcomp.com). The 3D crystal structure of human histone acetyltransferase was downloaded from Protein Data Bank (PDB ID: 4PZS) (Oikonomakos et al., 2000). Before docking experiment, the structure of compound 1 was prepared for docking by minimizing its energy using MOE. Most macromolecular crystal structures contain little or no hydrogen coordinate data due to limited resolution and thus protonation was done prior to docking using Protonate 3D tools implemented in MOE. Protonation was followed by energy minimization up to 0.05 Gradient using Amber99 forcefield. The docking protocol predicted the same conformation as was present in the crystal structure with RMSD value close to the allowed range (Paul and Mukhopadhyay, 2004) and surrounded by the same active site residues of the enzyme. Amongst the generated docking conformations the top-ranked conformation was visualized for ligand-enzyme interaction using MOE. Analysis of the docking results showed that compound 1 fit well within the active site of histone acetyltransferase enzyme (Figure 2). From the docking conformation it was observed that oxygen atom of the compound established hydrogen bond with the active site residue Gln169. The phenyl ring of the compound formed arene-arene interaction with the active site residue His165 (Figure 2). Furthermore, several hydrophobic interactions between compound 1 and the hydrophobic residues of the enzyme were also observed. The presence of hydrogen bond, arene-arene and hydrophobic interactions confirm that the compound 1 may be specific to this site. These preliminary results suggest that the compound 1 might exhibit inhibitory activity against histone acetyltransferase enzyme. These computational predictions are verified by our experimental results in the compound 1 showed good anti-cancer activity (Table 1). 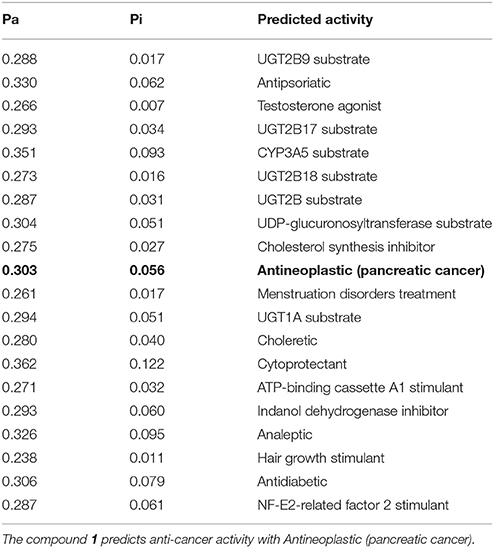 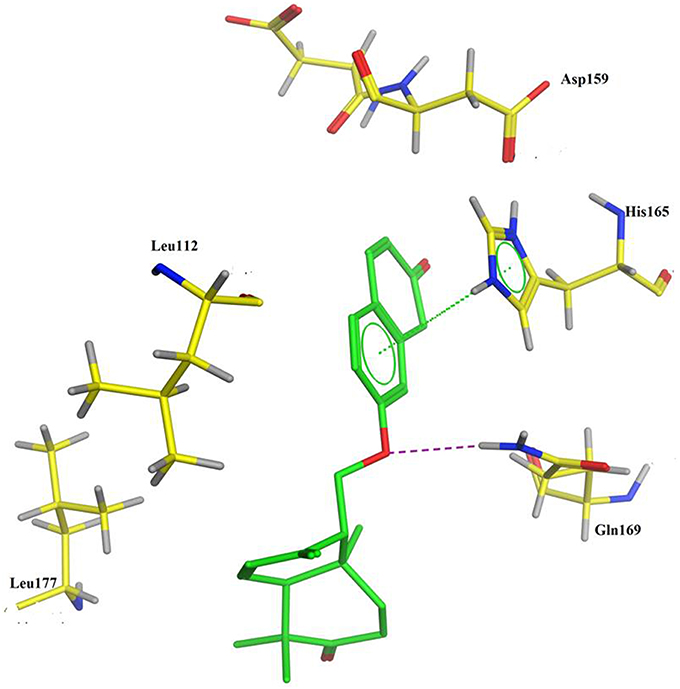 Kalita, J., Chakrabarty, A., and Tanti, B. (2011). Assessment of Antifertility activity of some traditionally used plants by different ethnic communities in three districts of Assam, India. J. Herbal Med. Toxicol. 5, 65–72.

Copyright © 2016 Alam, Khan, Wadood, Khan, Bashir, Aman, Jan, Rauf, Ahmad, Khan and Farooq. This is an open-access article distributed under the terms of the Creative Commons Attribution License (CC BY). The use, distribution or reproduction in other forums is permitted, provided the original author(s) or licensor are credited and that the original publication in this journal is cited, in accordance with accepted academic practice. No use, distribution or reproduction is permitted which does not comply with these terms.