Leptin is an anti-obesity hormone that attenuates food intake and enhances energy expenditure (Zhang et al., 1994; Campfield et al., 1995). It exerts anti-obesity action through Ob-Rb, the long isoform of the leptin receptor that is expressed mainly in hypothalamic neuronal cells (Fei et al., 1997). Leptin activates both the Janus kinase 2 (JAK2)-signal transducer and activator of transcription 3 (STAT3) and JAK2-STAT5 pathways upon activation of the Ob-Rb leptin receptor (Ghilardi et al., 1996; Vaisse et al., 1996; Hosoi et al., 2002; Gong et al., 2007; Mütze et al., 2007). Because leptin has an anti-obesity effect, the hormone was initially expected to decrease body weight in obese patients. However, the majority of obese patients are leptin-resistant, and do not respond to leptin efficiently (Heymsfield et al., 1999). Therefore, though leptin is now thought to be unsuccessful for the treatment of obesity, understanding the mechanisms of the development of “leptin resistance” has become a hot topic for research (Friedman and Halaas, 1998; Friedman, 2003). Several mechanisms of the pathogenesis have been proposed (Hosoi and Ozawa, 2010); we and other research groups have recently suggested the possible involvement of ER stress (Hosoi et al., 2008; Ozcan et al., 2009). The ER plays a key role in maintaining protein folding. However, when unfolded proteins accumulate in the ER in response to stressful stimuli, cells activate the UPR to cope with the stress (Walter and Ron, 2011). Upon induction of ER stress, cells induce CHOP and GRP78 as one of the UPR (Walter and Ron, 2011). Previously, a candidate drug was identified to ameliorate ER stress-induced leptin resistance: flurbiprofen, a NSAID (Hosoi et al., 2014). However, the action mechanisms of flurbiprofen on leptin have not yet been elucidated in detail.

The hypothalamic neuronal cells senses nutrients, such as glucose, in the blood and regulates energy balance. Glucose up-regulates POMC in the hypothalamic neuron, thereby inhibiting food intake (Zhang et al., 2011), whereas feeding is increased when the glucose level is lowered by 2-deoxy-D-glucose in the rat brain (Miselis and Epstein, 1975). Under low glucose conditions, AMPK is activated. AMPK is a serine-threonine kinase that is activated when the AMP/ATP ratio increases. Glucose (25 mM) enhances leptin signaling by inhibiting AMPK, while AMPK activation under low glucose conditions (5 mM) inhibits leptin signaling (Su et al., 2012). In addition to AMPK, glucose deprivation induced the UPR (Hosoi et al., 2013). Given the important role of glucose on neuronal function in regulating food intake, it is of interest to analyze the pharmacological effect of flurbiprofen on regulating neuronal function in the glucose-deprived state, i.e., leptin-induced STAT3 activation, AMPK activation in neuronal cells.

The crosstalk between nutrients and hormone action plays an important role in regulating neuronal activity, which subsequently affects the feeding response. As the flurbiprofen has anti-obesity effect (Hosoi et al., 2014), it is of interest to analyze the effect of flurbiprofen on the regulation of glucose mediated neuronal activity, which regulates energy homeostasis. In the present study, we investigated the effect of flurbiprofen on leptin action in the glucose-deprived state in neuronal cells.

The human Ob-Rb leptin receptor construct was a kind gift from Genetech, Inc. (CA). The construct was transfected into SH-SY5Y cells using the LipofectAMINE PLUS Reagent (Life Technologies, Inc.) according to the manufacturer’s instructions. The stable transfectants were obtained by selection with the antibiotic G418 (Hosoi et al., 2006).

Human neuroblastoma SH-SY5Y-Ob-Rb cells were maintained in Dulbecco’s modified Eagle’s medium supplemented with 10% (v/v) heat-inactivated fetal calf serum at 37°C in a humidified incubator under 5% CO2 and 95% air. We treated the cells with flurbiprofen at the concentration of 100 μM in the present experiment.

Results are expressed as the mean ± SE of the stated value. Statistical analyses were performed using the Student’s t-test. 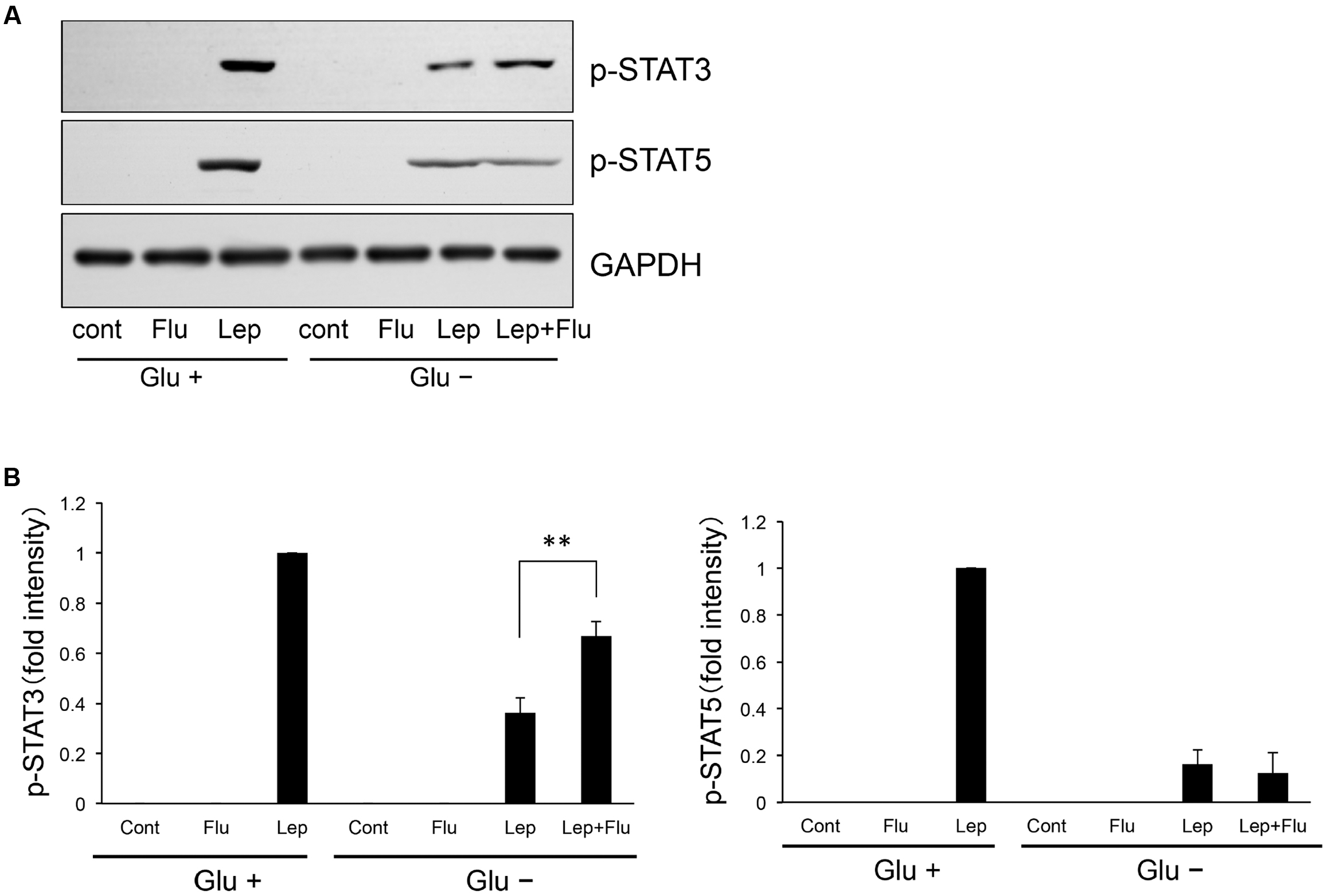 FIGURE 1. Flurbiprofen ameliorates inhibition of leptin-induced STAT3 but not STAT5 signaling in the glucose deprivation state. (A) SH-SY5Y Ob-Rb cells were treated with flurbiprofen (Flu:100 μM) in the absence of glucose for 4 h. Leptin (Lep: 0.5 μg/mL, 15 min)-induced STAT3 and STAT5 phosphorylation was then analyzed by Western blotting. (B) Densitometric analyses of phospho-STAT3 and phospho-STAT5 were conducted using image analysis software. Each set of data was expressed as fold increase over leptin treatment (Glu+) cells. ∗∗P < 0.01 leptin (Glu-) versus leptin+flurbiprofen (Glu-). n = 7.

Flurbiprofen Did Not Affect Glucose Deprivation-Induced Induction of UPR 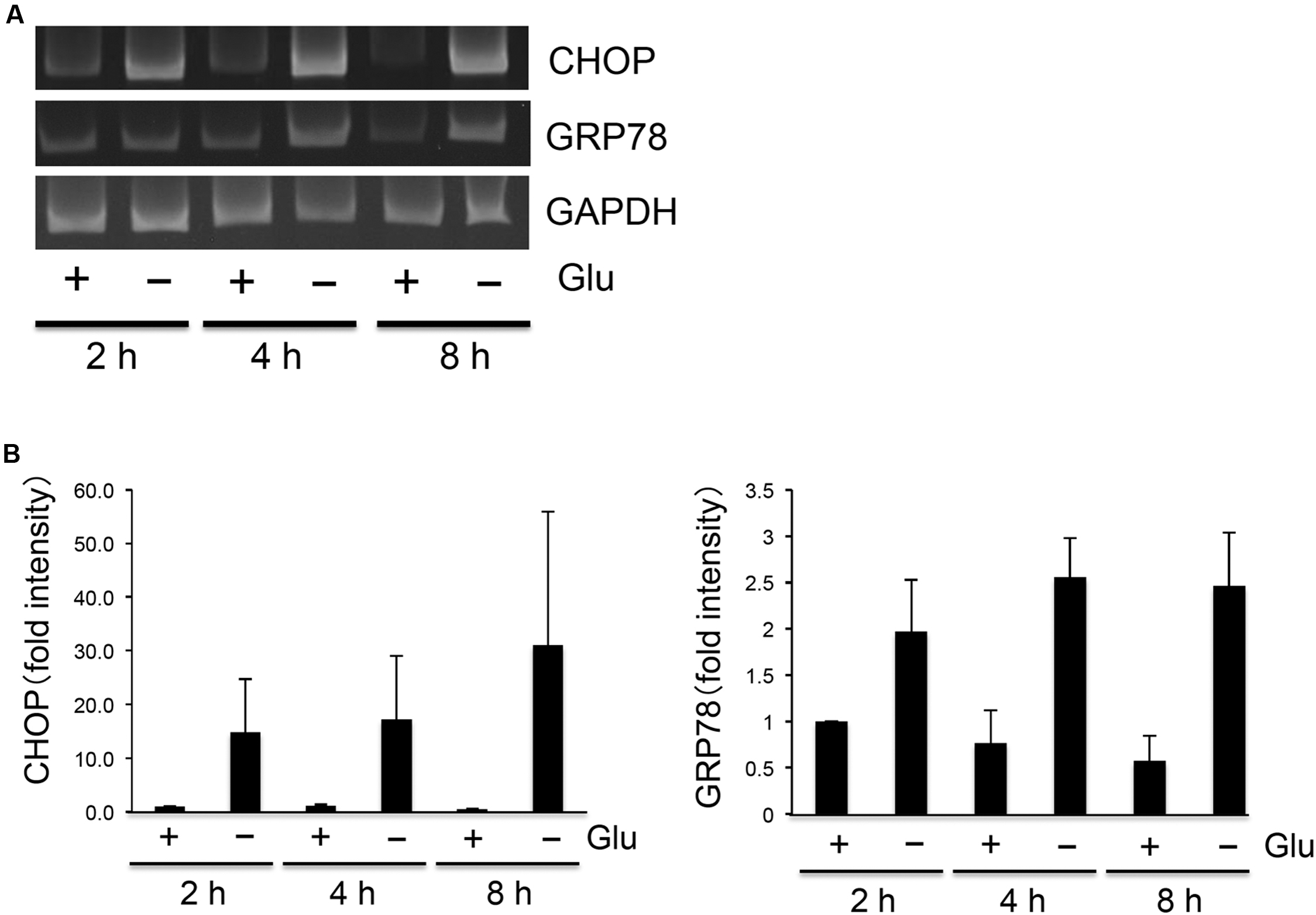 FIGURE 2. Glucose deprivation-induced UPR in SH-SY5Y Ob-Rb neuronal cells. (A) SH-SY5Y Ob-Rb cells were cultured in the presence or absence of glucose for 2, 4, and 8 h. ER stress markers, CHOP and GRP78, were analyzed by RT-PCR using specific primers. (B) Densitometric analyses of CHOP and GRP78 were conducted using image analysis software. Each set of data was expressed as fold increase over control cells. n = 4. 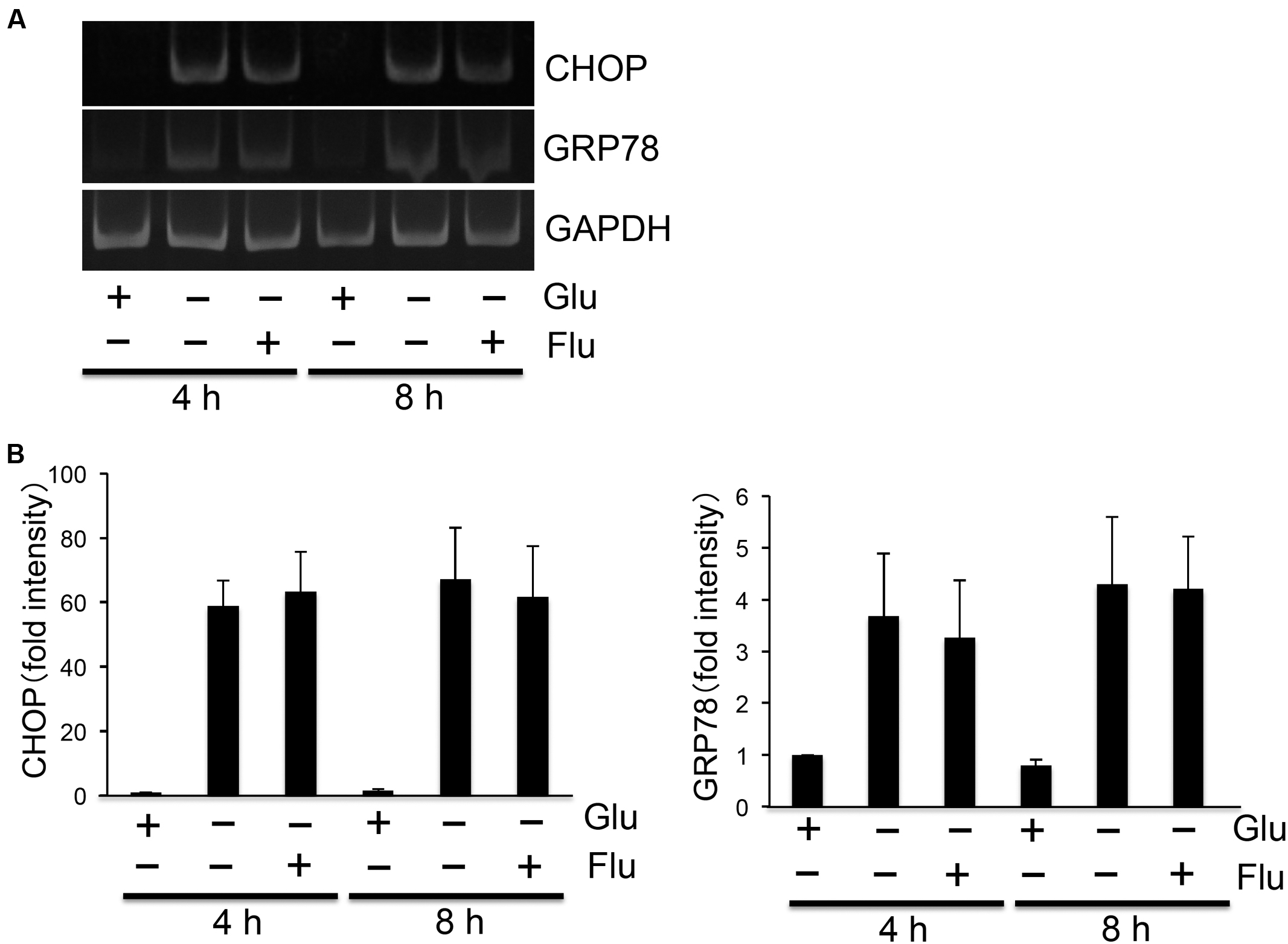 FIGURE 3. Flurbiprofen did not affect glucose deprivation-induced induction of UPR. (A) SH-SY5Y Ob-Rb cells were treated with flurbiprofen (Flu:100 μM) in the absence of glucose for 4 and 8 h. ER stress markers, CHOP and GRP78, were analyzed by RT-PCR. (B) Densitometric analyses of CHOP and GRP78 were conducted using image analysis software. Each set of data was expressed as fold increase over control cells. n = 3.

AMP-activated protein kinase is activated under low glucose conditions (Kahn et al., 2005). Furthermore, this activation is involved in the pathogenesis of leptin resistance (Su et al., 2012). Therefore, we investigated whether flurbiprofen affects AMPK activation under this condition. Flurbiprofen was administered with or without glucose for 4 h and the phosphorylation status of AMPK was analyzed. We observed that the phosphorylation level of AMPK increased in the glucose-deprived state in SH-SY5Y Ob-Rb neuronal cells; however, treatment with flurbiprofen (100 μM) ameliorated AMPK phosphorylation (Figure 4). Therefore, flurbiprofen may be involved in the inhibition of AMPK activation in the glucose-deprived state.

FIGURE 4. Flurbiprofen reduces AMPK phosphorylation in the glucose deprivation state. (A) SH-SY5Y Ob-Rb cells were treated with flurbiprofen (Flu:100 μM) in the absence of glucose for 4 h. Phosphorylation status of AMPK was analyzed by Western blotting. (B) Densitometric analysis of phospho-AMPK was conducted using image analysis software. ∗P < 0.05 control (Glu-) versus flurbiprofen (Glu-). Each set of data was expressed as fold increase over control cells. n = 3.

Obesity is one of the major risk factor of metabolic diseases and a lot of effort was made to prevent the disease (Hosoi and Ozawa, 2010; Carter et al., 2016; Scarpace et al., 2016; Strehler et al., 2016). In the present study, we found that flurbiprofen has a unique pharmacological effect on the regulation of neuronal function in the glucose-deprived state. Flurbiprofen can ameliorate glucose deprivation-induced leptin resistance by specifically regulating STAT3, but not STAT5, phosphorylation. Furthermore, while flurbiprofen did not modulate the glucose deprivation-induced activation of the UPR in neuronal cells, it did modulate AMPK activation in the glucose-deprived state. The results of the present study suggest an important pharmacological action of flurbiprofen in regulating neuronal function during glucose deprivation.

Glucose-sensing neurons in the CNS play an important role in maintaining energy homeostasis (Campfield and Smith, 2003). Defects in the response of glucose-sensing neurons are linked with diseases such as obesity and diabetes (Routh, 2010). Therefore, identifying candidate drugs that can regulate the responses of glucose-sensing neurons is important. Interestingly, leptin action was reported to be regulated by glucose, with glucose dose-dependently increasing leptin signaling and glucose deprivation attenuating leptin-induced signaling (Su et al., 2012). In the present study, we found that flurbiprofen increases leptin action in neurons during glucose deprivation by modulating AMPK activity. These results suggest that flurbiprofen has the novel pharmacological action of ameliorating leptin resistance possibly by regulating AMPK-mediated glucose metabolism. It is an important future subject to analyze the effect of flurbiprofen on leptin’s action at more physiological conditions.

In the present study, we elucidated a unique pharmacological property of flurbiprofen: the attenuation of leptin resistance under glucose-deprivation. As the glucose in the hypothalamic neurons may play a role in regulating energy homeostasis, current finding may represent one of a key pharmacological tool for attenuating obesity.

The present study was supported by a Grant-in-Aid for Scientific Research from the Ministry of Education, Science, Sports and Culture, Japan and the Takeda Science Foundation.

Copyright © 2016 Hosoi, Suyama, Kayano and Ozawa. This is an open-access article distributed under the terms of the Creative Commons Attribution License (CC BY). The use, distribution or reproduction in other forums is permitted, provided the original author(s) or licensor are credited and that the original publication in this journal is cited, in accordance with accepted academic practice. No use, distribution or reproduction is permitted which does not comply with these terms.