The gut microbiota also controls the number of enteric pathogens by producing anti-microbial molecules, such as proteinaceous bacteriocins (Kamada et al., 2013), and by inhibiting the proliferation of pathogens by generating organic acids-short chain fatty acids (SCFAs) that lower the local pH (Shin et al., 2002), and by regulating the expression of virulence genes in certain pathogenic bacteria, such as Salmonella (Gantois et al., 2006). Moreover, the gut microbiota indirectly prevents pathogenic infection by enhancing the functions of the host mucosal barrier and innate immune system (Kobayashi et al., 2005). Therefore, in a healthy gastrointestinal tract, host cells and the gut microbiota synergistically protect the host from pathogenic infections.

The human intestinal tract harbors a dense population of resident microbiota, consisting of bacteria, archaea, viruses, and fungi. Host genetics, diet, and environmental insults can affect the gut microbial composition (Human Microbiome Project Consortium, 2012), and disruption of the gut microbiota can lead to invasion and overgrowth of certain pathogenic bacteria, such as virulent Escherichia coli, Salmonella enterica serovar Typhimurium, and Clostridium difficile (Bohnhoff et al., 1954; Rupnik et al., 2009; Ayres et al., 2012). In particular, the use of antibiotics can lead to a temporary or long-term reduction of bio-diversity, and this change in the gut microbiota, called dysbiosis, increases susceptibility to microbial infection and the proliferation of antibiotic-resistant strains (Vangay et al., 2015).

On the other hand, probiotics have been also considered for the treatment or prevention of diverse infectious diseases, and previous studies have reported the successful treatment of infection by pathogenic bacteria, including Escherichia, Klebsiella, Shigella, Enterobacter, Pseudomonas, Clostridium, Helicobacter, etc., (Kabir et al., 1997; Brashears et al., 1998; Forestier et al., 2001; Ogawa et al., 2001). Therefore, the use of probiotics could be an alternative strategy for the treatment or prevention of infectious disease that avoids the gut microbiota dysbiosis associated with antibiotic treatment.

In our previous study, we reported that Lactobacillus acidophilus strain LA1 (11869BP), an isolate from a dairy product, had preventive effects against Salmonella infection (Kim et al., 2013). While the anti-pathogenic effects of various probiotics have been widely demonstrated, the exact mechanism of action is not well understood. In addition, our genomic knowledge of L. acidophilus strains is insufficient because only five complete L. acidophilus genomes including LA1 are currently available in NCBI database (https://www.ncbi.nlm.nih.gov/genome/). Therefore, to gain better insight into its probiotic and Salmonella infection-preventing effects, we sequenced and analyzed the genome of L. acidophilus LA1. The availability of this genomic information will allow for further in-depth analysis and a better understanding of the probiotic functions of L. acidophilus strains for the prevention of pathogenic infections.

Genome assembly was performed using HGAP 3.0 (Chin et al., 2013), with default options. The start position of the chromosome was determined by the location of the gene encoding the chromosomal replication initiation protein, dnaA, as well as the GC skew pattern. Annotation of this genome was carried out with the NCBI Prokaryotic Genome Annotation Pipeline (PGAAP) (Tatusova et al., 2016). From the ASN.1-formatted annotation file, the protein-coding genes and rRNA genes were extracted using the NCBI toolbox (http://www.ncbi.nlm.nih.gov/IEB/ToolBox). Coding genes were assigned to COG categories using BLASTP and the COG database (Galperin et al., 2015), with an e-value cutoff of 1e-3.

A phylogenetic tree based on the 16S gene sequences was constructed by the maximum likelihood method based on the Tamura-Nei model (Tamura and Nei, 1993). Orthologous average nucleotide identity (OrthoANI) between genome sequences was computed (Lee et al., 2016). To obtain genomic distance, the OrthoANI values were converted to distance values with the following formula: distance = 1 – (OrthoANI/100). Evolutionary distance was computed from the genome-distance matrix using the neighbor-joining method (Saitou and Nei, 1987). The tree is drawn to scale, with branch lengths presented in the same units as those for the evolutionary distances used to infer the phylogenetic tree. The phylogenetic tree was generated using MEGA6 (Tamura et al., 2013).

A pan-genomic study was performed to investigate the functional conservation in the sequenced genome by using GET_HOMOLOGOUS (Contreras-Moreira and Vinuesa, 2013). COG triangles was used as the clustering method, and a minimum of 50% amino acid identity and 50% coverage were used for the clustering threshold.

The CRISPR regions were identified with a CRISPR on-line detection tool, CRISPR finder (Grissa et al., 2007). The sequences of dicers and spacers were downloaded from the analysis server after the finding computation. Aligned pairs of spacers in L. acidophilus NCFM and LA1 were obtained by running BLASTN without the dust masking option. The numerical order of spacers in LA1 followed the order in NCFM. To find counterparts for the spacers, a BLASTN search was performed against the NCBI NT and NR database (downloaded on 16 May, 2017), with no dust option and an e-value of 0.1. The search result was filtered with 90% identity and 80% coverage.

Prophage insert regions were detected with an on-line phage search tool, PHASTER (Arndt et al., 2016). The genomic structure of the inserted prophage and the associated genes were obtained from the computation result. The detected ORFs were annotated based on the highest hit in a BLAST search against the annotated bacterial genome database in the PHASTER system.

Overall Features of the LA1 Genome

We obtained the complete genome sequence of L. acidophilus LA1 using SMRT sequencing, which showed that the genome is composed of a 1.99-Mbp circular chromosome with 34.7% G+C content (Table 1). A total of 1,953 genes were identified in the LA1 genome, including 1,844 protein-coding genes, 76 RNA genes, and 33 pseudo genes. Four sets of ribosomal RNA genes, including 5S, 16S, and 23S genes, were also found. Other RNA genes, including 61 tRNA genes and three non-coding RNA (or ncRNA) genes were found. We also found ncRNA-coding sequences in L. acidophilus NCFM, even though they were not reported in the genome annotation. We hypothesized that these ncRNAs were absent from the annotation because of the difference in the annotation methods, since these types of ncRNA genes were recently introduced in the annotation system (PGAAP 3.1 and above). These genomic features of LA1 are shown in Figure 1A. 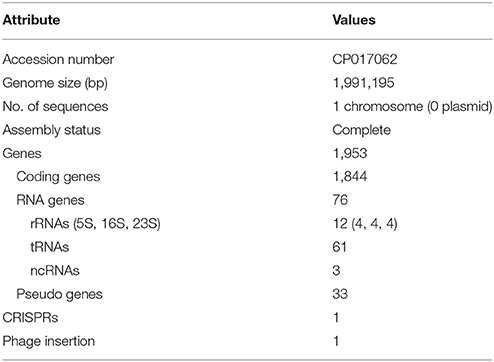 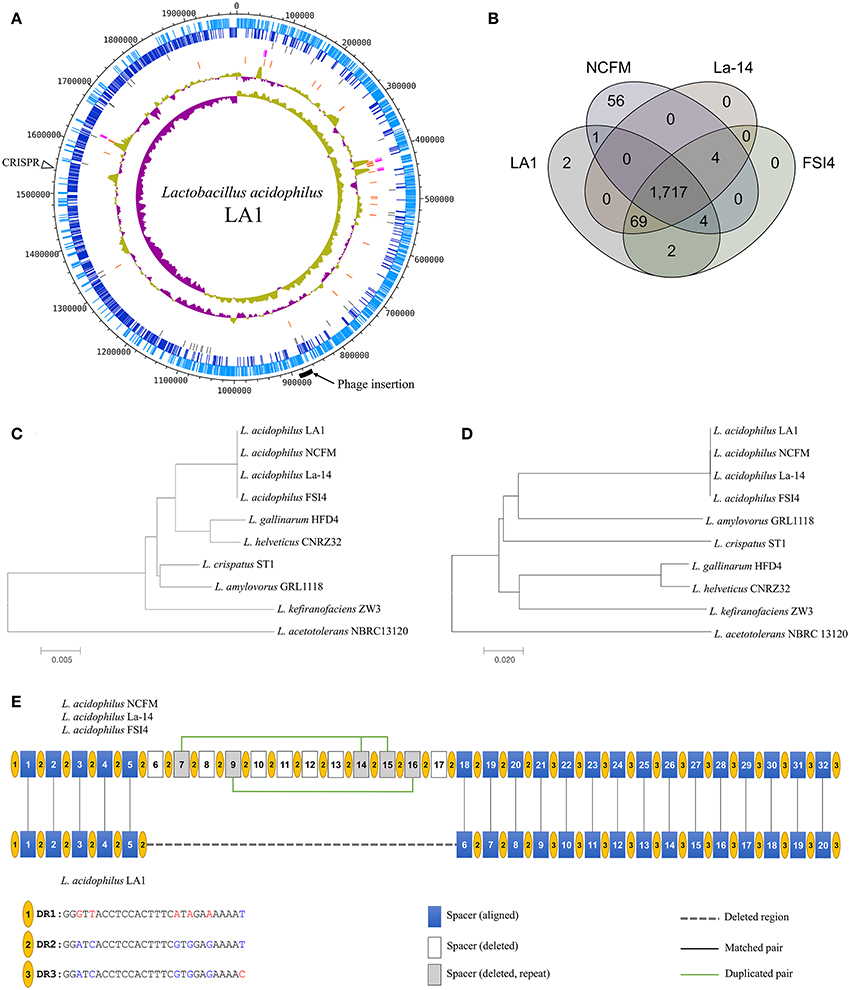 Figure 1. (A) Circular map of the Lactobacillus acidophilus LA1 genome. Tracks (from outset): forward-strand coding CDS, reverse-strand coding CDS, pseudogenes, rRNAs, tRNAs, G+C content, and GC skew. (B) Venn diagram of the shared gene clusters among the four L. acidophilus genomes. (C) Phylogenetic tree of the L. acidophilus groups based on 16S rRNA genes and (D) phylogenetic tree based on genome-wide identities (ANI). (E) Comparison of the CRISPR structure in LA1 and the other L. acidophilus genomes. Yellow circles indicate the dicers. The blue, white, and gray boxes represent the spacers that are aligned in LA1, the spacers deleted in LA1, and the deleted repeat spacers in LA1, respectively. A dashed line fills the deleted region in LA1. Vertical lines indicate aligned pairs of spacers. Green lines link the repeat spacers.

Functional classifications of the protein-coding genes of LA1 were categorized into 26 COG functional codes (Supplementary Figure S1, Supplementary Table S2). Of the 1,844 protein-coding genes in LA1, 1,553 were assigned to COG, and 291 genes were not assigned. Because 135 genes were assigned multiple codes, the number of COG codes was 1,705. The percentage of proteins with unknown function, including “General function prediction only (R),” “Function unknown (S),” and “Not assigned (–),” was 29.3%. The four analyzed L. acidophilus strains, including LA1, have nearly identical numbers of functional genes, and they showed >99% genomic identity (Supplementary Table S3).

Unique Characteristics of the LA1 Genome

A 26-kbp prophage insert was identified in the LA1 genome at chromosomal position 863,940–890,001 (Supplementary Table S7). The position and size of the insert region were similar to that in other L. acidophilus genomes, except for the number of proteins encoded in that region. Despite their high similarity, the number of genes varies from 10 to 15 (Supplementary Table S8). LA1 contains the smallest number of genes, FSI4 has the largest number of genes, and NCFM and La-14 have the same number of genes (12). Genes required for phage invasion, including attL (ORF1), phage integrase (ORF6), and attR (ORF15), were found in the inserted region. LA1 showed the highest rate of decay in the inserted phage genome, and five genes, ORF2–5 and ORF9, were degraded when compared to FSI4.

Here, we sequenced and analyzed the complete genome of a probiotic strain with the potential to prevent Salmonella infection, L. acidophilus LA1. In the current study, we demonstrated that the LA1 genome contains the genes required for the biosynthesis of the three bacteriocins, Enterolysin A, Helveticin J, and Acidocin J. In addition, the six-fold larger number of GT genes in LA1 compared to the number in one of the most well-described probiotic strains, L. plantarum KLDS1.0391, suggests the probiotic potential of LA1, especially in terms of immune stimulation and fortification of pathogen defense. Interestingly, one of the most unique features of LA1 when compared to the other currently available L. acidophilus genome sequences is the large, clean-cut of 12 spacers from the CRISPR region and the difference in the historical record of phage infection, which can be used as a genetic marker for identification of this industrially and medically important probiotic strain to distinguish it from genetically related L. acidophilus strains. Considering the possible use of L. acidophilus LA1 as beneficial probiotic, the availability of the LA1 genome is an important step for understanding its evolution and probiotic function against pathogenic bacteria.

This research was supported by the Main Research Program (E0170602-01) of the Korea Food Research Institute (KFRI) and the World Institute of Kimchi (KE1702-2) funded by the Ministry of Science, ICT, & Future Planning.

The Supplementary Material for this article can be found online at: https://www.frontiersin.org/articles/10.3389/fphar.2018.00083/full#supplementary-material

Tamura, K., and Nei, M. (1993). Estimation of the number of nucleotide substitutions in the control region of mitochondrial DNA in humans and chimpanzees. Mol. Biol. Evol. 10, 512–526.

Copyright © 2018 Chung, Kang, Lim, Lim, Lim, Roh and Nam. This is an open-access article distributed under the terms of the Creative Commons Attribution License (CC BY). The use, distribution or reproduction in other forums is permitted, provided the original author(s) and the copyright owner are credited and that the original publication in this journal is cited, in accordance with accepted academic practice. No use, distribution or reproduction is permitted which does not comply with these terms.