Background: Transmembrane tumor necrosis factor (TNF) receptors are involved in inflammatory, apoptotic, and proliferative processes. In the bloodstream, soluble TNF receptor II (sTNFR2) can modify the inflammatory response of immune cells and is predictive of cardiovascular disease risk. We hypothesize that sTNFR2 is associated with epigenetic modifications of circulating leukocytes, which may relate to the pathophysiology underlying atherogenic risk.

Methods: We conducted an epigenome-wide association study of sTNFR2 levels in the Framingham Heart Study Offspring cohort (examination 8; 2005–2008). sTNFR2 was quantitated by enzyme immunoassay and DNA methylation by microarray. The concentration of sTNFR2 was loge-transformed and outliers were excluded. We conducted linear mixed effects models to test the association between sTNFR2 level and methylation at over 400,000 CpGs, adjusting for age, sex, BMI, smoking, imputed cell count, technical covariates, and accounting for familial relatedness.

Conclusion: Differentially methylated loci in leukocytes associated with sTNF2 levels reside in active regulatory regions, are overrepresented in antigen processes, and are linked to inflammatory diseases.

DNA methylation is an epigenetic modification that influences gene expression without changing the underlying genetic code. Adding a methyl group to the cytosine of cytosine-phosphate-guanine dinucleotides (CpGs) can modify the binding of transcription factors, influence the conformational structure of chromatin, and thus suppress the transcription of specific genes. Altered DNA methylation has been found to be linked to a variety of neoplastic, inflammatory, cardiometabolic, and atherosclerotic diseases (Ying et al., 2000; Maier and Olek, 2002; Fitzpatrick and Wilson, 2003; Hiltunen and Yla-Herttuala, 2003; Gallou-Kabani and Junien, 2005; Ling and Groop, 2009; Lund and Zaina, 2009).

In order to characterize the potential epigenetic link between sTNFR2 levels and disease, we conducted the first epigenome-wide association study of sTNFR2 levels with DNA methylation in circulating leukocytes from participants in a large community based cohort, the Framingham Heart Study (FHS). We also examined the association of sTNFR2-related differential methylation with gene expression in the same cohort. Finally, we integrated the findings with known biological pathways, genomic links to disease from genome-wide association studies, and targets of known drugs and compounds.

The FHS is a longitudinal community-based cohort, started in 1948. Three generations of participants have been recruited. The present study was focused on participants from the second generation, the Offspring cohort (Kannel et al., 1979) who attended the eighth examination between 2005 and 2008. We excluded participants with self-reported auto-immune diseases, such as rheumatoid arthritis, or who took immune modulating agents (e.g., methotrexate), steroids, and synthetic estrogens. All participants gave written informed consent and the study was approved by the Institutional Review Board of Boston Medical Center.

Measurement of sTNFR2 Levels in Plasma

Fasting morning blood samples were obtained during the routine clinic visit. The samples were then frozen at -80°C before processing. The sTNFR2 levels were measured by the quantitative enzyme-linked immunosorbent assay per the manufacturers’ protocols (R&D Systems, Minneapolis, MN, United States). The assay shows high reproducibility rate with intra-assay coefficients of variation of 2.3% (Jefferson et al., 2007). The sTNFR2 levels were natural log transformed and values outside of four standard deviation of the mean were excluded from the analysis (n = 1).

We used linear mixed effects regression models, whereas the untransformed beta value of methylation at the CpG site was treated as the dependent variable, and the sTNFR2 level was treated as the independent variable, adjusted for age, sex, BMI, smoking status, and technical covariates. The sex was coded as “1” for men and “2” for women. For the smoking status, we coded current smokers as “1” and the rest of participants as “0.” Technical covariates included known batch effects (methylation array, row, and column) and two methylation principal components to account for unmeasured batch effects. To account for the family relatedness in Framingham, a covariance matrix was calculated based on the pedigree, and was used as the random effect for the linear mixed effects models. We additionally adjusted for the proportion of six cell types imputed via a reference panel (Houseman method) (Houseman et al., 2012), including CD8+ T cells, CD4+ T cell, natural killer cells, B cells, monocytes and granulocytes. Bonferroni correction was used to adjust for multiple testing, and significant CpG sites were defined as those with P < 0.05/N, where N was the number of tests. The analyses were performed using the “lmekin” function within R package “kinship”, and the clinical and technical covariates were used as fixed effect in the models.

Each epigenome-wide significant CpG from the sTNFR2 EWAS analysis was tested using linear mixed effect models for the association with expression levels of genes in cis (±500 kb). The cis expression-methylation association models specified the gene expression residual as the dependent variable, the DNA methylation residual as the independent variable of interest and additionally adjusted for 25 methylation surrogate variables and 25 expression surrogate variables to account for unmeasured technical and batch effects. Multiple testing was accounted for by Bonferroni correction for the number of CpGs in distinct loci (>500 kb) tested times the number of unique cis genes on the expression array.

We found methylation at 168 CpG sites to be associated at epigenome-wide thresholds (P < 1.2 × 10-7) with sTNFR2 levels (complete list in Supplementary Table 1) after adjustment for age, sex, BMI, smoking, imputed cell counts, methylation principal components, technical covariates, and accounting for familial relatedness. Figure 1 depicts the Manhattan plot of CpG sites associated with sTNFR2 with the top CpG sites noted in Table 2. The strongest association was at cg07839457 (P = 3.2 × 10-22), located 436 bp upstream of the transcription start site of NLRC5, which is involved in cytokine response, inhibition of NF-κB activation and negative regulation of type I interferon signaling pathways (Cui et al., 2010). 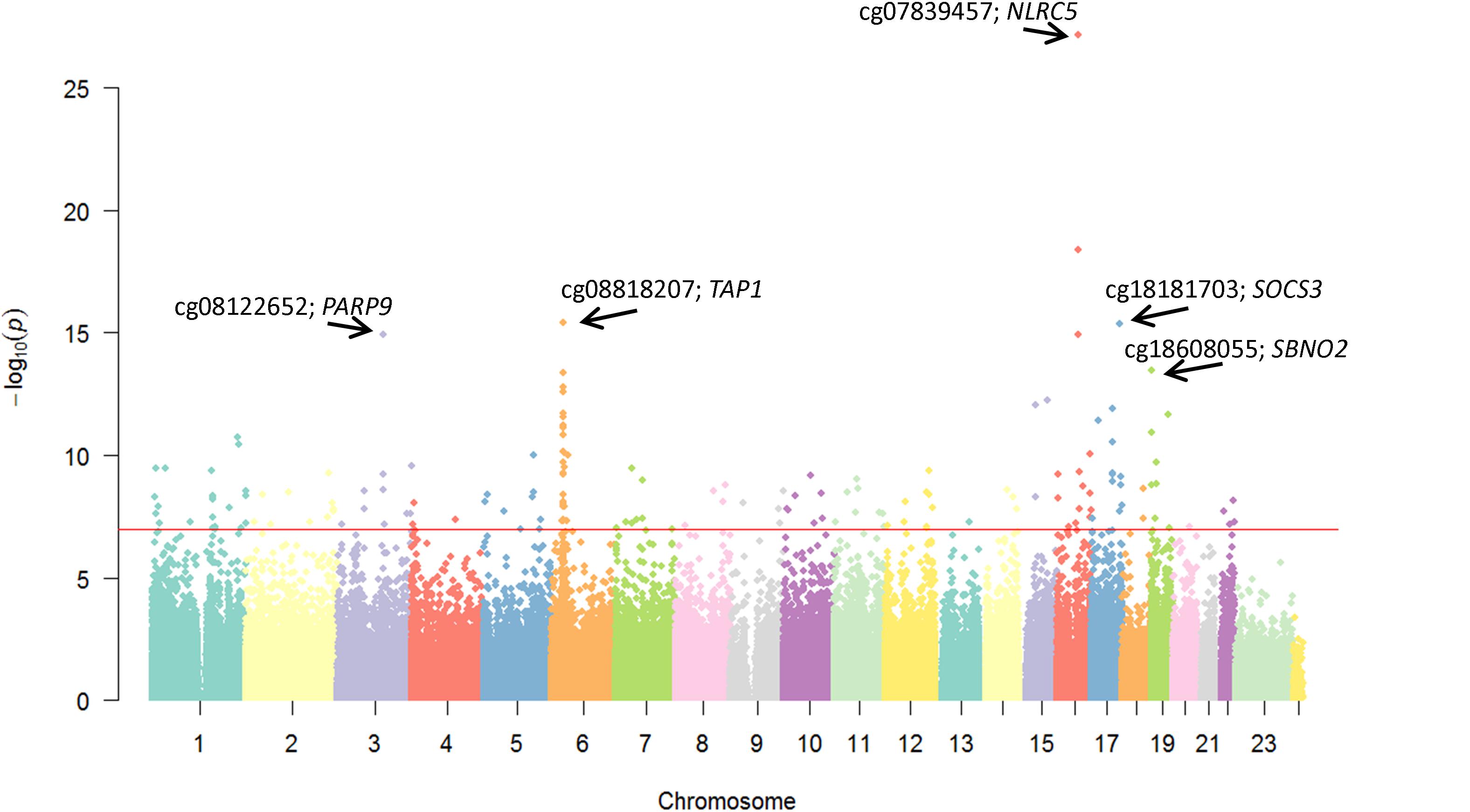 FIGURE 1. Manhattan plot of methylation of CpG sites associated with sTNFR2 levels. The annotations for the top five loci are shown. 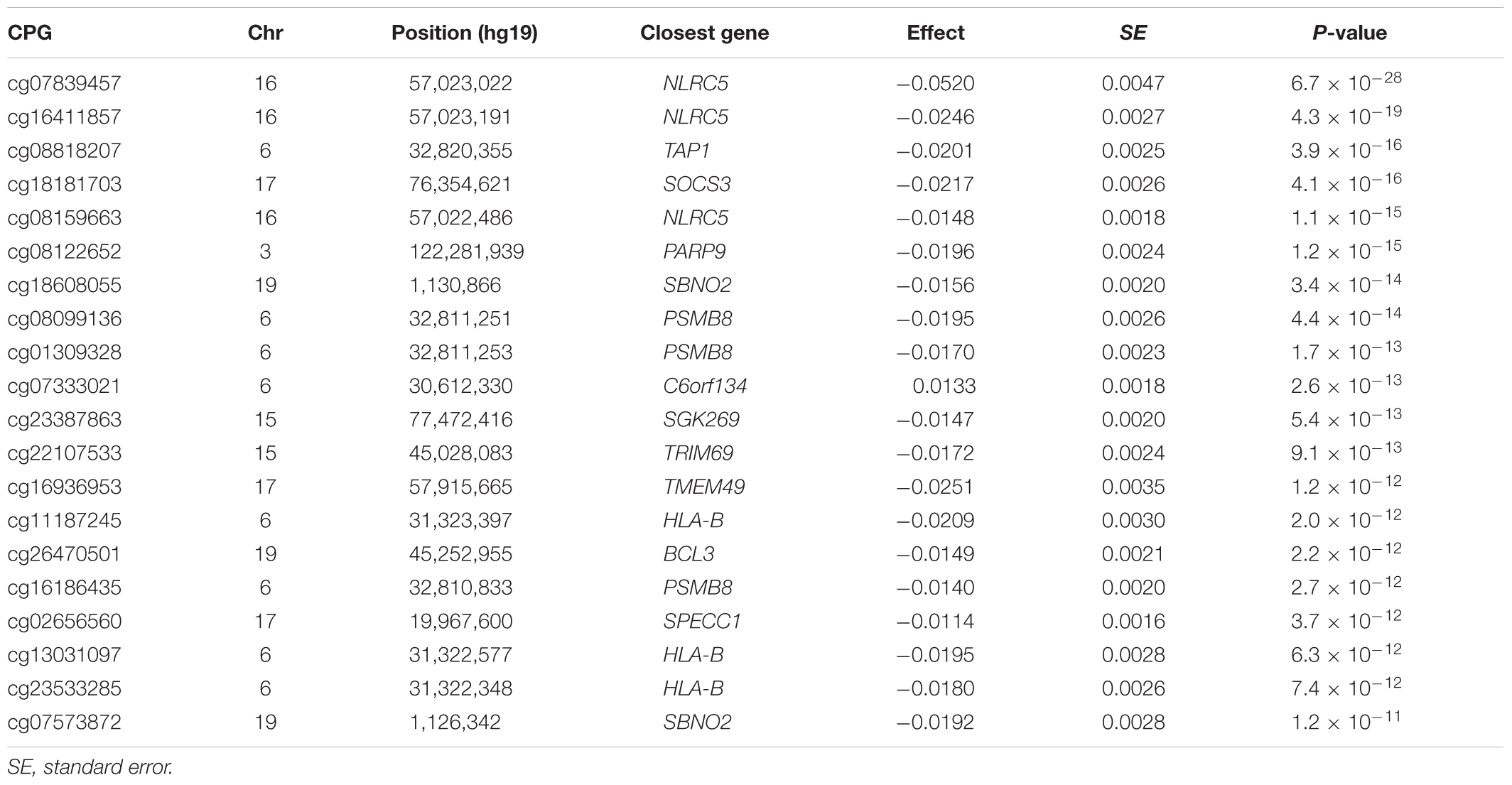 We also examined if the sTNFR2-related CpG sites are associated with gene expression in whole blood. The 168 CpG sites are in 127 distinct loci, comprising 4352 genes in cis (±500 kb). As shown in Supplementary Table 2, these CpGs were associated with the expression of 27 genes after adjustment for multiple testing (P < 1.1 × 10-5). Over 5% of the variation in expression (partial r2) was explained by methylation at the identified CpGs for three genes (HCP5, AIM2, and NMUR1). HCP5 is a non-coding gene located in the MHC class I region, and is linked to viral interactions, neoplastic progression, and psoriatic arthritis (Liu et al., 2008). The expression of AIM2 is induced by interferon gamma and plays a role in the innate immune system. NMUR1 is a transmembrane protein involved in signal transduction.

We present the first epigenome-wide analysis of leukocyte-derived DNA methylation in relation to sTNFR2 levels in a large community-based cohort. We identified differential methylation at 168 CpGs within 127 distinct genomic loci that are enriched for active regulatory regions across inflammatory macrophages and vascular tissues. Our results highlight functional relevance of genomic regulation of antigen presentation and processing in relation to sTNFR2 levels with multiple loci identified in the MHC region. Differentially methylated loci are associated with gene expression of 27 cis-genes in whole blood that have clinical relevance for inflammatory diseases, clotting factors, and obesity-related traits. Taken together, delineation of genomic regulatory alterations in relation to sTNFR2 demonstrates a host of altered pathways that may be important targets for novel or known therapeutics to prevent CVD and other sTNFR2-related diseases.

The most significant CpG site resides within the promoter region of NLRC5. The NLRC5 gene encodes a nucleotide binding protein that belongs to the highly conserved NOD-like protein family, which regulates multiple interferon signaling pathways (Cui et al., 2010). NLRC5 has been shown to be cardioprotective; deficiency of NLRC5 exacerbates high fat diet-induced heart injury in murine models (Ma and Xie, 2017). Another significant sTNFR2-related CpG site, cg08818207, is in the first intron of TAP1, which encodes a transporter belonging to the ATP binding cassette subfamily. The protein is involved in the transportation of a variety of molecules across the cell membranes. It is essential to the presentation of peptides to human leukocyte antigen molecules. Mutations in TAP1 result in immune-related diseases such as MHC class I deficiency (Hanalioglu et al., 2017) but are also associated with cardiometabolic diseases, such as type 2 diabetes (Li et al., 2014).

As expected, among genes that showed differential expression with sTNFR2-related CpG sites, many of them are involved in inflammatory and autoimmune diseases. One example is SLC22A4, which encodes an organic cation transporter that plays an essential role in the elimination of small organic cations such as environmental toxins and drugs (Morrissey et al., 2013; Nigam et al., 2015). It has already been proposed as potential drug target for the treatment of inflammatory diseases such as rheumatoid arthritis (Tokuhiro et al., 2003; Martinez et al., 2006; Maeda et al., 2007) and Crohn’s disease (Leung et al., 2006). An additional five identified genes are targets of known drugs or compounds. For example, carfilzomib, an anti-neoplastic and selective proteasome inhibitor, influences PSMB8, proteasome subunit beta 8. Carfilzomib has already been shown to have cardiovascular effects with substantial cardiotoxicity observed in clinical oncology trials (Waxman et al., 2017).

Our study has limitations. First, unlike genetic sequence variants, differences in DNA methylation may occur secondary to the phenotype of interest and not causal effects. Despite not being able to determine the direction of effect, secondary changes may still be important for downstream consequences, such as CVD. Second, current study measured DNA methylation profiles in the whole blood, which contains a mixture of different types of cells. Although we adjusted for cell proportion changes using statistical approaches, residual confounding due to unmeasured cell type differences or other unmeasured technical or clinical factors may be present. Third, although we assayed over four hundred thousand CpGs, there are many unmeasured CpGs sites and therefore additional methylation differences may be relevant. Fourth, we only assessed DNA methylation from leukocytes and did not assay DNA methylation concurrently in other tissues in the body where findings may differ. Therefore, our assessment is focused on circulating immune-cell related changes. Fifth, as sTNFR2 is not a widely measured biomarker, we were unable to replicate our findings in an external cohort with DNA methylation. Further studies are needed to determine if our findings replicate in other cohorts and are generalizable to other age groups and ethnicities/races.

EWAS of leukocyte DNA for CVD-related inflammatory biomarkers represents a powerful approach to gain novel insights into affected biological pathways. In our sTNFR2 EWAS, we highlight antigen processing pathways and specific genes in NF-κB signaling and cytokine development and release. Genes in these pathways have previously been linked to human disease GWAS of inflammatory diseases, clotting factors, and obesity-related traits. Further experimental studies and trials are needed to determine if perturbation of these genes will support the repurposing of known drugs or development of novel compounds which may prevent or treat CVD and other sTNFR2 related diseases.

The Supplementary Material for this article can be found online at: https://www.frontiersin.org/articles/10.3389/fphar.2018.00207/full#supplementary-material

Copyright © 2018 Mendelson, Johannes, Liu, Huan, Yao, Miao, Murabito, Dupuis, Levy, Benjamin and Lin. This is an open-access article distributed under the terms of the Creative Commons Attribution License (CC BY). The use, distribution or reproduction in other forums is permitted, provided the original author(s) and the copyright owner are credited and that the original publication in this journal is cited, in accordance with accepted academic practice. No use, distribution or reproduction is permitted which does not comply with these terms.